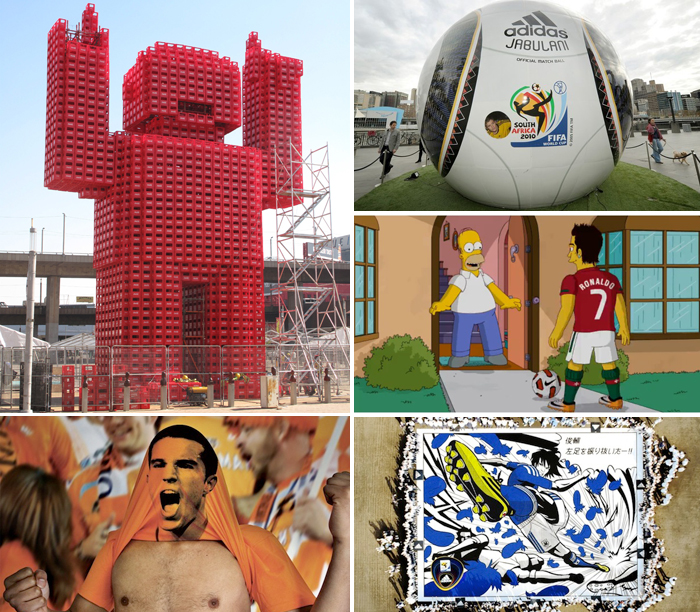 With the end of FIFA World Cup 2010 drawing near, we decided to put together a brief recap of some of the most creative ideas that surrounded this worldwide event. With everyone from big named brands flexing their marketing muscles to independent illustrators and artists displaying their raw and natural talent, we got to experience the games on a whole new and exciting level…thanks to them. If we didn't list a creative FIFA inspired idea here, please let us know in the comments section. Or, if you'd like, tell us which of these ideas you enjoyed the most. GIANT ART INSTALLATIONS COKE CRATEFAN 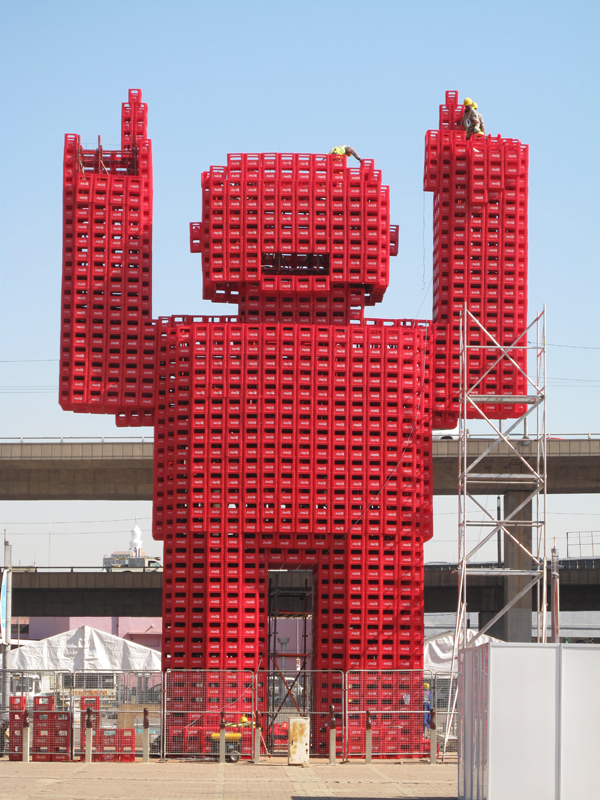 Designed for Coca-Cola by Animal Farm, Coke's creative consultancy in Cape Town, this giant art installation has got to be one of the coolest things ever. Called Cratefan, it's made out of 2,500 standard Coke bottle crates and is located at the fan park in Newtown Joburg. Cratefan is a recycling initiative with all the materials being reused/recycled once he has finished celebrating. Rock on! Read more, here. ADIDAS GIANT FOOTBALL 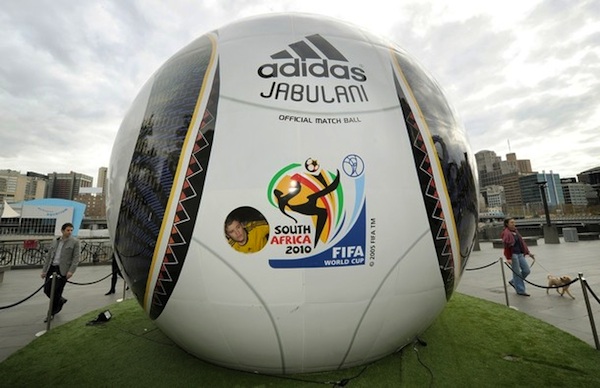 Adidas creates a giant world cup ball for one lucky person to live in. 23-year-old Adam Santarossa was selected by Adidas to spend a month inside of it and just watch the World Cup games. As compensation he is being paid 3,000 dollars ($2,600 U.S.) and is enjoying amenities like a cleaner, free laundry, a PlayStation 3 and a laptop. For his trouble, he'll receive the contents of the ball and three bags full of sports gear. Now that's one lucky dude. Read more, here. NIKE BALLMAN 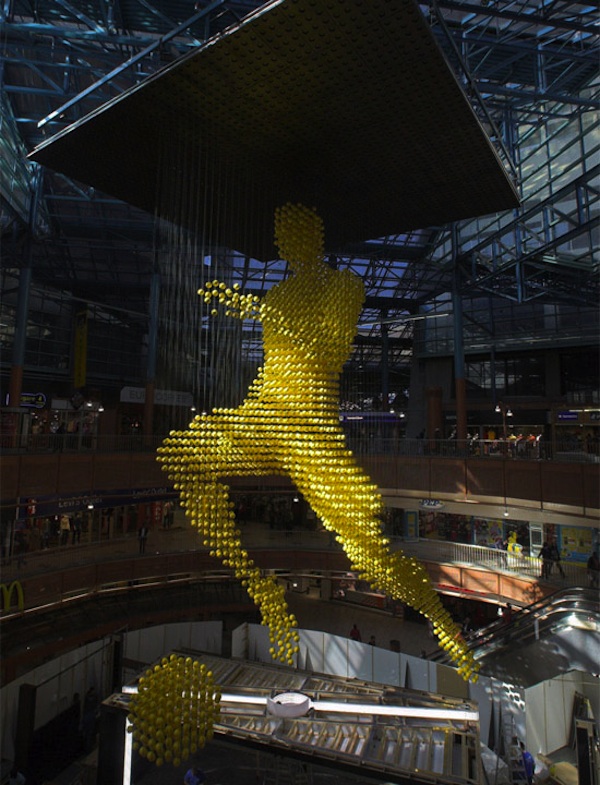 To celebrate the 2010 FIFA World Cup, Nike commissioned this giant sculpture made of 3,000 soccer balls at a shopping center in Johannesburg, South Africa. The balls are suspended on steel wire ropes, giving the illusion that “Ballman” is floating in mid-air. The sculpture will stay in place for the whole World Cup tournament, and when dismantled, the balls will be given away. See more pics, here. COMIC BOOK MURAL 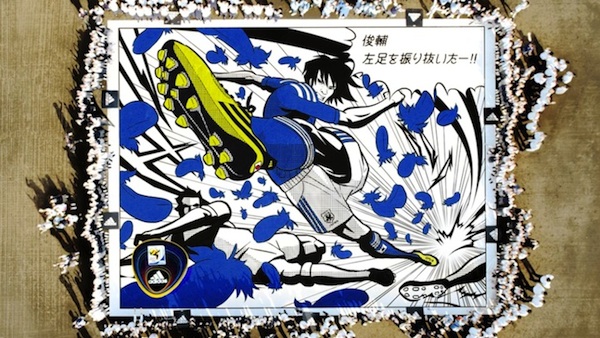 As a sweet send off for Japan's National Team's departure to the World Cup, TBWA/Hakuhodo and Adidas Japan made a massive mural/comic book project called Sky Comic. Thirteen huge murals were created in 13 different Japanese cities over a five week period. As they were completed, each of the murals were photographed from the sky by a hot air balloon. On May 25, the murals were brought together as a giant comic strip at Tokyo's Haneda Airport. See more, here. HYUNDAI GIANT VUVUZELA 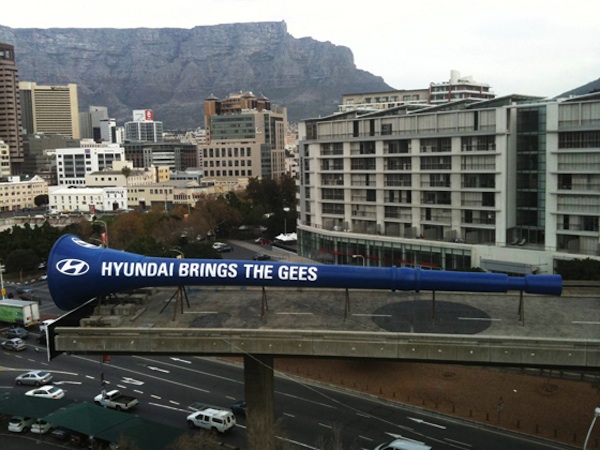 With the vuvuzela getting more attention these days than some of the players, Hyundai did their part in promoting the instrument by creating a 114-foot one at the FIFA World Cup 2010 in Cape Town, South Africa. It is blown at the beginning of each World Cup game. If you dare, listen here. EPIC VIDEOS NIKE, WRITE THE FUTURE

Nike's three-minute “Write the Future” film, starring soccer superstars Didier Drogba, Wayne Rooney and Cristiano Ronaldo, set a new record for most views of a viral video ad in its debut week. Ad agency Wieden+Kennedy produced the ad and it was directed by Mexican filmmaker Alejandro Gonzlez Irritu, who's also known for his film Babel. Nike VP Trevor Edwards was quoted in Advertising Age saying the ad is “among the best we've ever done.” ADIDAS, STAR WARS CANTINA

Pepsis' ad for the 2010 FIFA World Cup in South Africa used the he song “Oh Africa” by Akon. This ad featured some of the greatest football stars including Messi, Henry, Kaka, Lampard, Ashavin, and Drogba. ENGLAND VS USA WORLD CUP

What better way to watch World Cup highlights than through legos? In fact, we got to see everything we needed to know about the USA-England World Cup match in 60 seconds, thanks to our yellow brick friends. ARTISTIC POSTERS ESPN MURALS 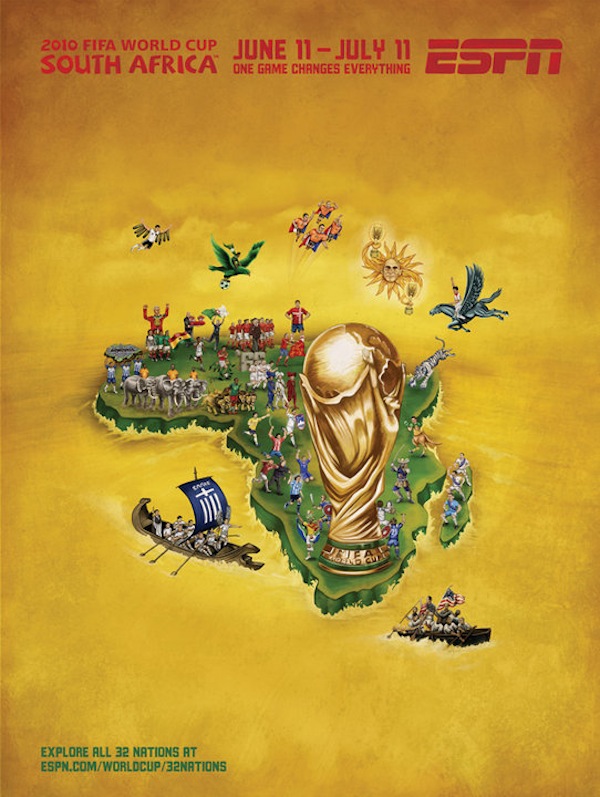 To promote the 2010 FIFA World Cup, ESPN commissioned artists to depict a story of each of the 32 teams in a mural. Each mural appeared in publications and on subway platforms and billboards in New York, Los Angeles, Chicago, and elsewhere. The network worked with the Wieden+Kennedy ad agency and the little-known AM I Collective, a group of artists based in Cape Town, South Africa. The murals are said to have been inspired by the style of Ghanaian movie posters from the 1980s. See more, here. CHARIS TSEVIS DIGITAL ART 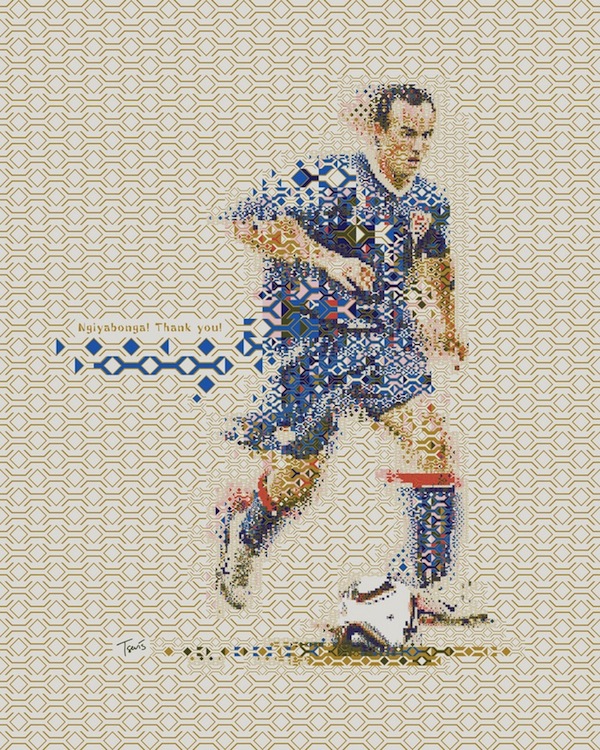 Charis Tsevis designed a set of posters as an experimental personal project inspired by the great African pattern heritage. As he states, “I am trying to develop a new technique and a new illustration style to celebrate the first FIFA World Cup to be hosted in the African continent.” See more, here. UNICEF WORLD CUP CALENDAR POSTER 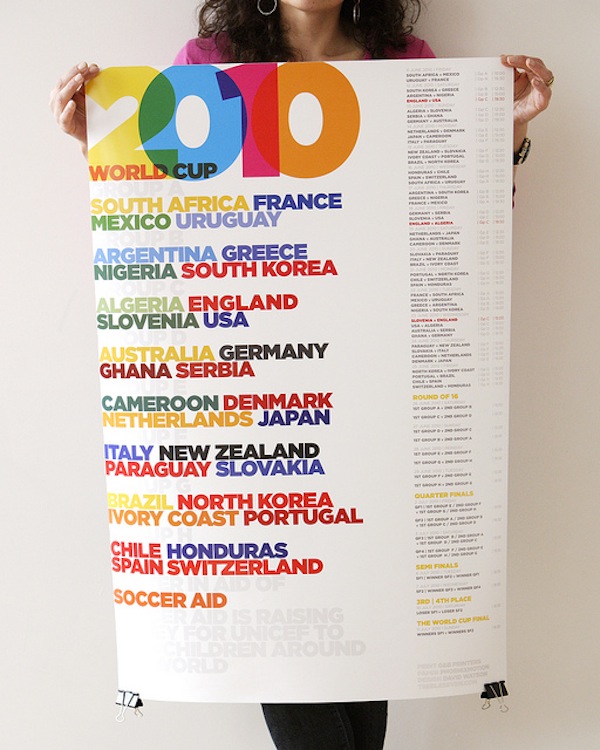 David Watson, a graphic designer from Trebleseven, made this stunning typographic football World Cup poster. Sales of the A1 double sided poster raises money for Soccer Aid – a British charity event which raises money for UNICEF. The front side of the poster lists all the groups, A-H so you can clearly see which countries are in which group. A calendar runs down the right hand side listing chronologically all the matches to be played in the tournament. Find out more, here. OTHER: CELEBRATORY T-SHIRT 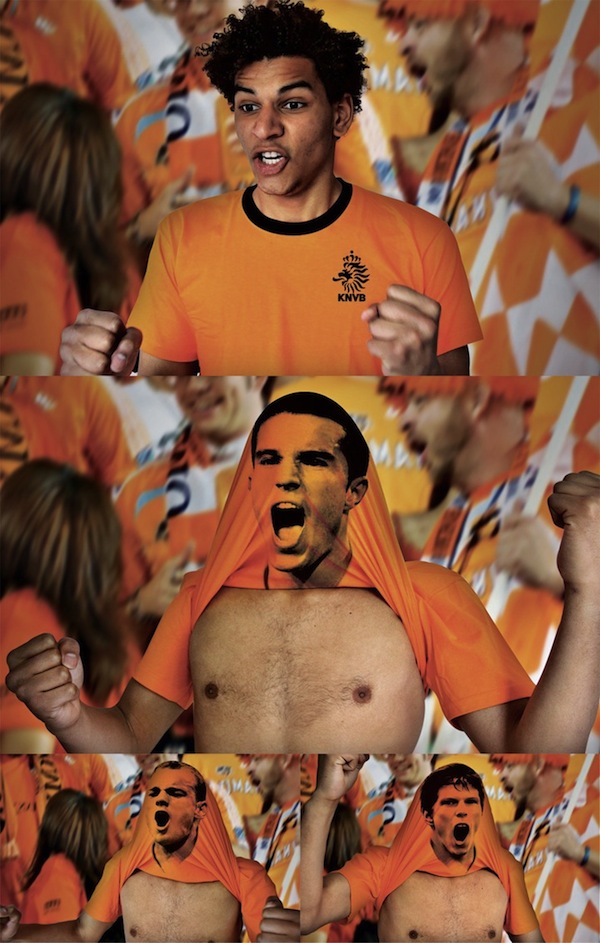 Netherlands-based advertising school Willem de Kooning Academie created this t-shirt for the Dutch Football Federation right in time for the 2010 FIFA World Cup. When your favorite team scores, pull the shirt over your head to reveal one of your favorite players screaming with joy. INTERACTIVE WORLD CUP SCHEDULE 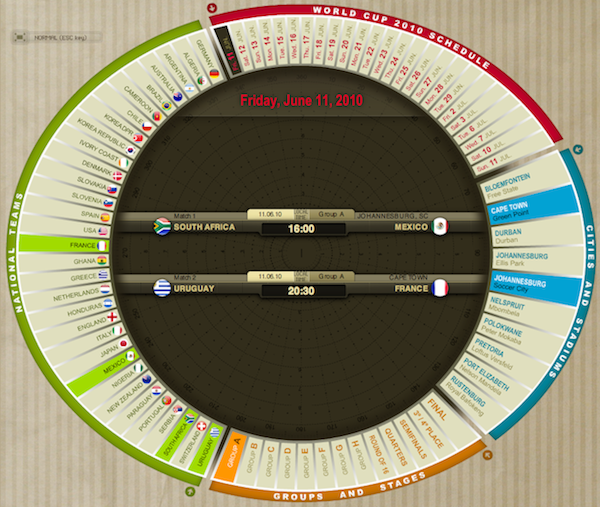 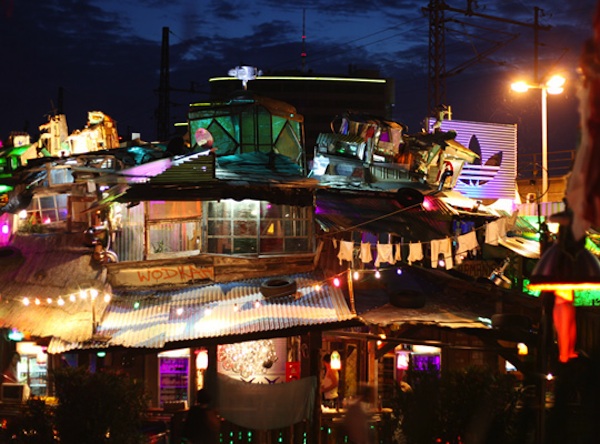 adidas Originals and Bar 25, one of Berlin's nightlife destinations, teamed up to create a very special place to celebrate the 2010 FIFA Worldcup, entitled Johannisburg 24. It included a tin-roofed with bizarre hidden rooms and dazzling light effects at night. The area of Johannisburg 24 also features an arena style set-up for public viewing with a capacity of up to 800 people while the 3 x 5 meter LED monitor screens the games. Watch the video to really get a feel of this renovated space. Read more, here.