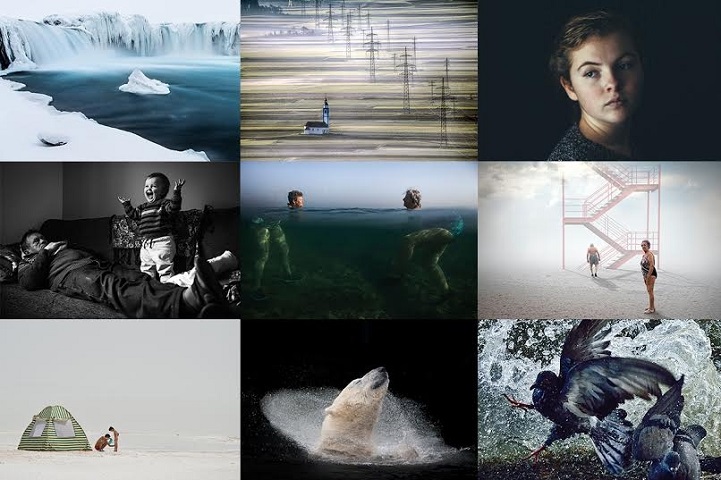 The 2016 Sony World Photography Awards is the world’s largest photography competition and, this year, ten entries from the Open competition and three from the Youth group were recognized out of a record breaking 230,103 entries from 186 countries. The Open competition accepted submissions in 10 different categories–Architecture, Arts and Culture, Enhanced, Low Light, Nature & Wildlife, Panoramic, People, Smile, Split Second, and Travel–and the Youth competition hosted three categories–Culture, Environment, and Portraits. The Youth entries were submitted by photographers aged 12 to 19, which included a stunning winning shot of Mount Kazbek by Anais Stupka, making her the youngest winner at only 12 years old!

According to Scott Gray, the CEO of the World Photography Organization: “Nurturing and supporting photographers is at the heart of the Sony World Photography Awards. Nowhere is this more clear than in the Open and Youth competitions which each focus on identifying and promoting amateur and enthusiast photographers.” Overall winners will be announced April 21st, but in the meantime, for your viewing pleasure, we would like to present the recently announced winning images from the Youth and Open divisions. 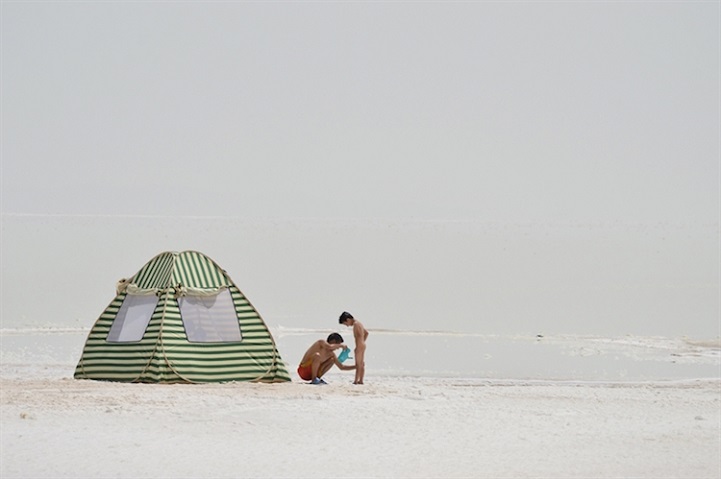 “The Oroomiyeh Lake has always been a place where people cleanse. cleanse their skin from the penetrating rays of the sun and cleanse their minds and render it like the landscape itself; white, blank, with an indistinguishable horizon.” 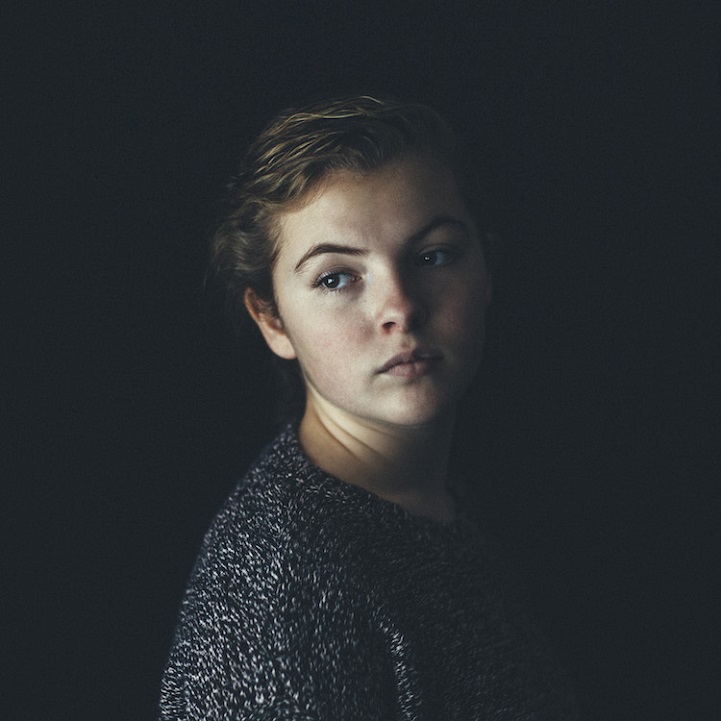 “Sarah, my sister, December 28th, 2015. After moving to a university across the country, I understood that I’d miss my family; my mother and father, and especially my sister. Like so many millions of other young adults around me, I left my family and my home this year for the first time, and in an instant, they were no longer a daily part of my life. I wanted to somehow speak to the mixed feelings I was experiencing; excitement, for the life I was about to begin, and nostalgia, for the one I was leaving behind. Traveling back to Maine for a short time allowed me to create this somewhat spontaneous image of my sister, giving me the opportunity to express this change in the best way I knew how.” 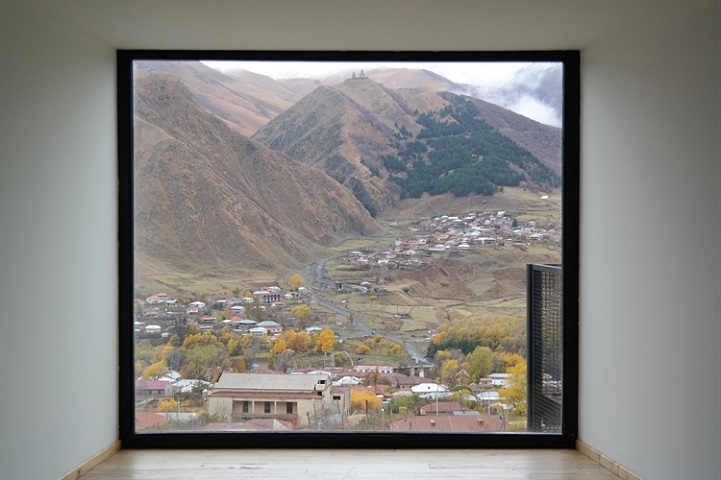 “A view of Mount Kazbek in Georgia. My family and I went to Georgia, Kazbegi on the last week of October for the half term break. We were staying at a beautiful hotel and I was just going to catch the elevator when I noticed this beautiful view from the window. I really wanted to take a photograph because in that frame you can see the positives and negatives of Mount Kazbek. For example you can see the amazing church on top of the mountain, but you can also see the poor town.” 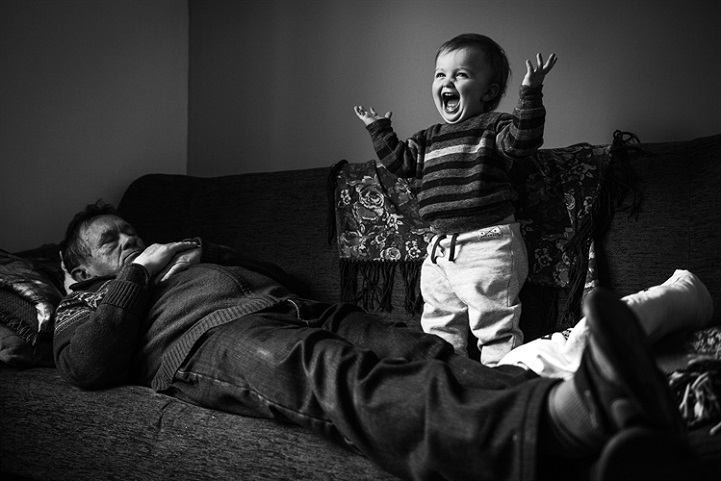 “It’s Easter, and after a large celebratory meal, a moment’s peace is an opportunity for a nap. The youngest member of the Nawrot family, having none of it, climbs onto the sofa and prepares to wake ‘Dziadzia Jacek’ (his grandfather). This brief moment before jumping on his grandfather’s legs is one of pure joy.” 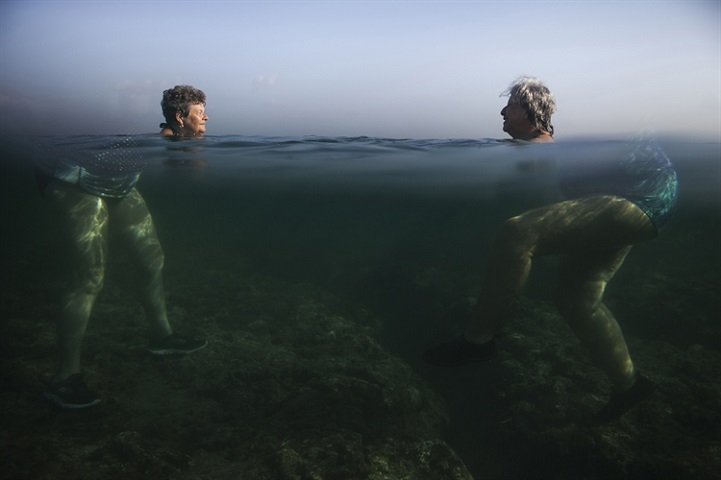 “Havana, People swim in the sea in Havana in April 28, 2015. On that Sunday, Cuba registered a temperature of 39.7 degrees, 0.1 degrees less than the island’s historic record as reported by Jose Rubiera, director of the National Forecast Centre part of the Institute of Meteorology of Cuba.” 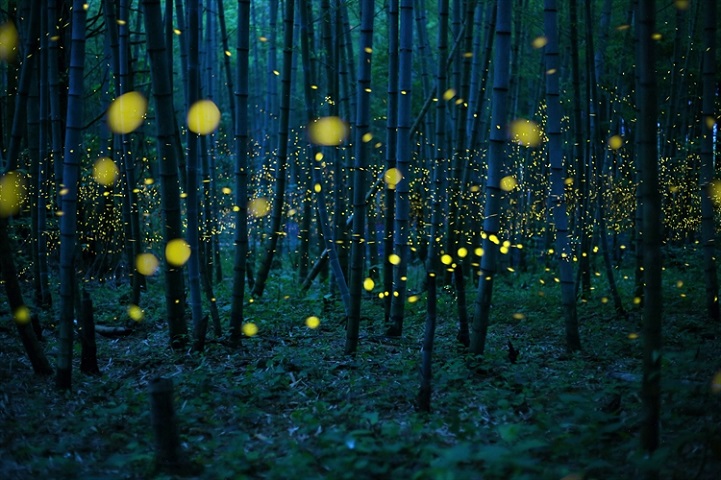 “The season of a firefly comes around in Japan at the beginning of a rainy season. This firefly is a species called Luciola parvula, and repeats blink. Hime-HOTARU, as we call it in Japan. This species flies in the beautiful forest. In particular, the firefly in bamboo forest is valuable. The population of these firefly decreases every year in Japan. These may be influenced by environmental destruction. This picture was taken under a little moonlight.” 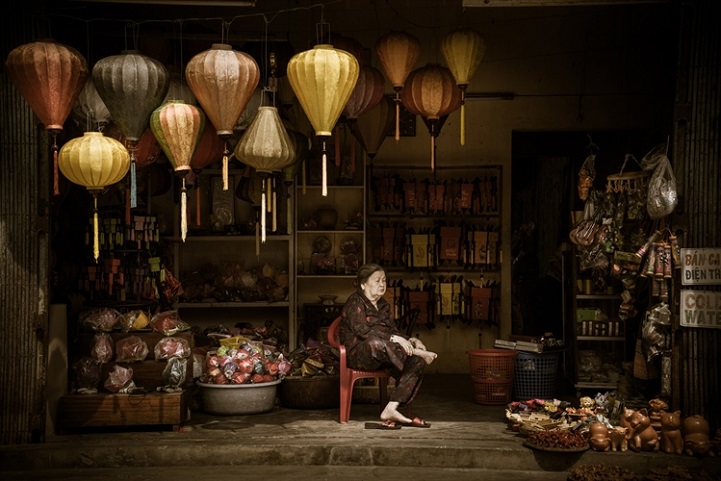 “Lantern Store in Hoi An Vietnam. I took this image during my visit to Hoi An, February 2015, an ancient town located in Vietnam’s central Quang Nam Province. While walking along a street in the early morning I was captivated by this wonderful lady starting her day, peacefully waiting for customers. She was perfectly framed by the store with beautiful morning light illuminating the lanterns, souvenirs and her wonderful character. The overall feel was of an old painting.” 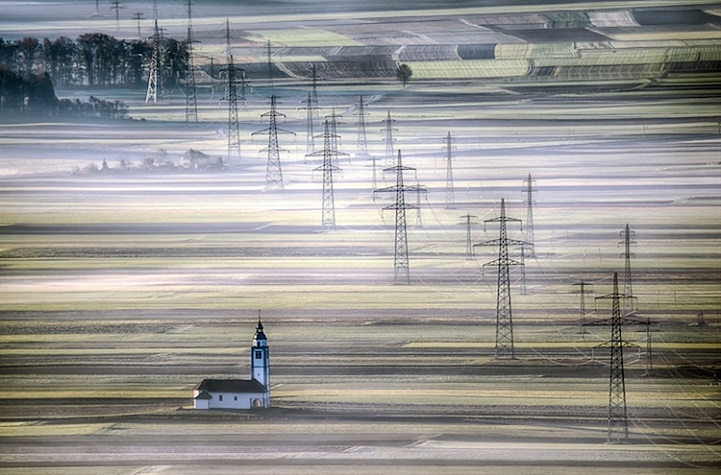 “Church on the fields of Sorko Polje” by Andrej Tarfila, Slovenia

“It all happened on a sleepy Monday autumn morning in the beginning of November. I was driving towards Kranj, the capital of Gorenjska region in the Slovenian Alps, when I suddenly coughed a marvellous sight of haze game in the fields rushing by the car window. I decided to abandon Kranj and the nervous drivers and heading to marjetna gora. The sight in front of me was simply overwhelming. I cut off the civilization and plunged into the silence light of the rising sun. The rays were shining through the morning haze in Sorko polje for a timeless and graceful shot captured on my camera.” 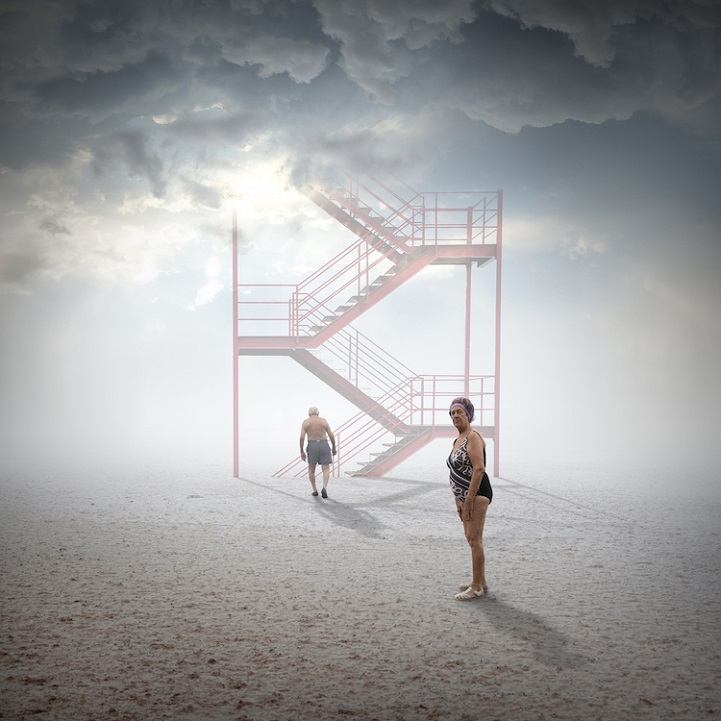 “I shot the subject last summer in Torrevieja (Spain). One day I went to take photos at sunrise and when I came back home I saw the first swimmers at morning. The woman captured my attention because she seemed recently arrived from the 60’s and then I thought the history between them and in the metaphor with planned obsolescence. It is the result of 5 blended photos and shadows adjustments to get more realism. The old woman in foreground in very shocking for her pose and her gaze to spectator. The old man in background helps me to complete the history with the up or down stairs.” 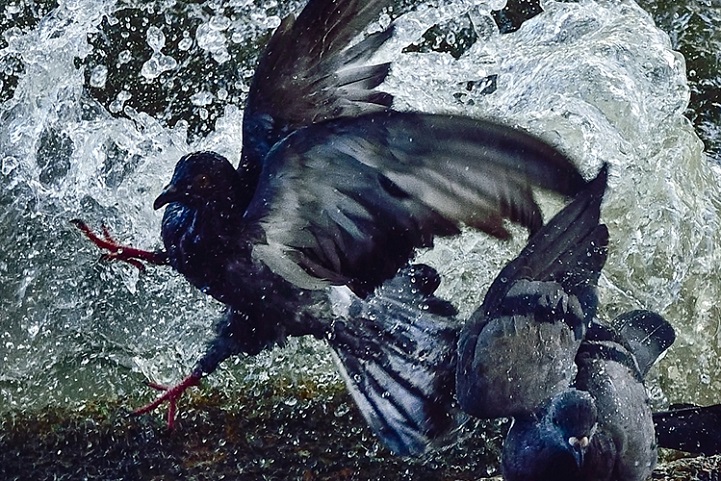 “Two birds were sipping water on the bank, unaware of the coming crashing waves! My category winning image is all about knowing what is going to happen. This is because if we could not see what was coming, one cannot take such an action scene in time no matter how fast your camera is. By using my street photography skill and observing each moving element in the scene, I could roughly see what was coming and was able to prepare my shot and capture the right moment at its peak. This way, the power of the scene and expression of the subjects will be most impactful and can, therefore, connect to audiences.” 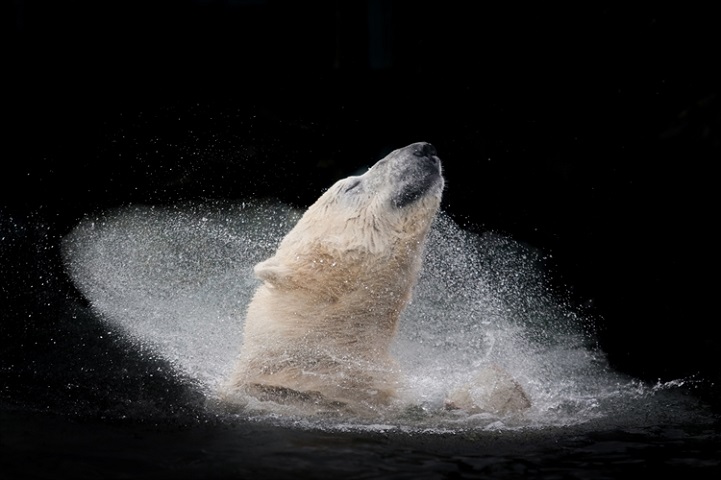 “A polar bear enjoying a bath. When I saw this Polar Bear swimming in the water, my goal was to capture the joy of his bath and also the energy with which he was taking a bath. The image was photographed in February 2015, during one of my trips to Prague.”

“This is the famous Goafoss in wintertime where I spent 10 days. Clear blue-green water and ice everywhere. In winter, particularly on snowy conditions, the bottom shoots of Godafoss are not easy, so the picture was taken from the top. It was my idea to take this image to the given conditions that evening. So we climbed 10 meters down on the snowy ground to get there and did it. It was cloudy, nearly no wind and so the spray of the waterfall was very low. When there is a lot of spray you cannot do a longtime exposure because the lens will get wet and the picture is not usable. So for this kind of picture the conditions were great. I chose an exposure time of 25s to get the smooth effect on the water.” 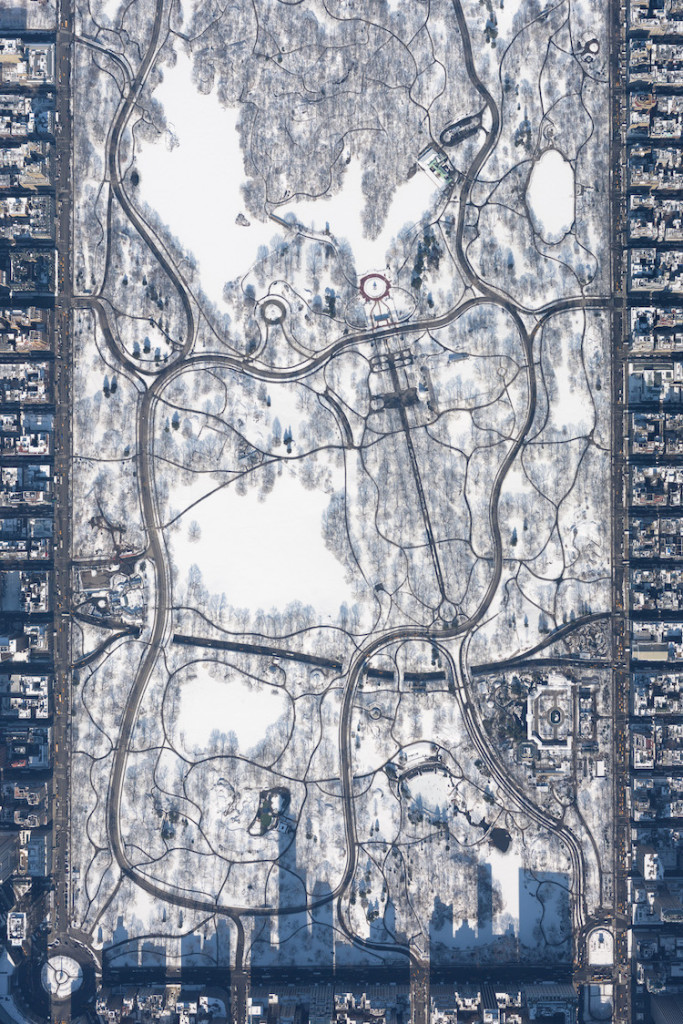 “It was one of those brisk wintry days in March 2015. Everyone was already tired of the long and tough winter here in the North East. Amazed by how clear the day was I took my Cessna above New York’s restricted airspace, which gave me a full freedom to roam. The winds were quite strong that day with no haze and unlimited visibility. With a bit of planning (and luck) I was able to capture perfect shadow alignment along the avenues–I had only one chance to capture–they were shifting fast.”