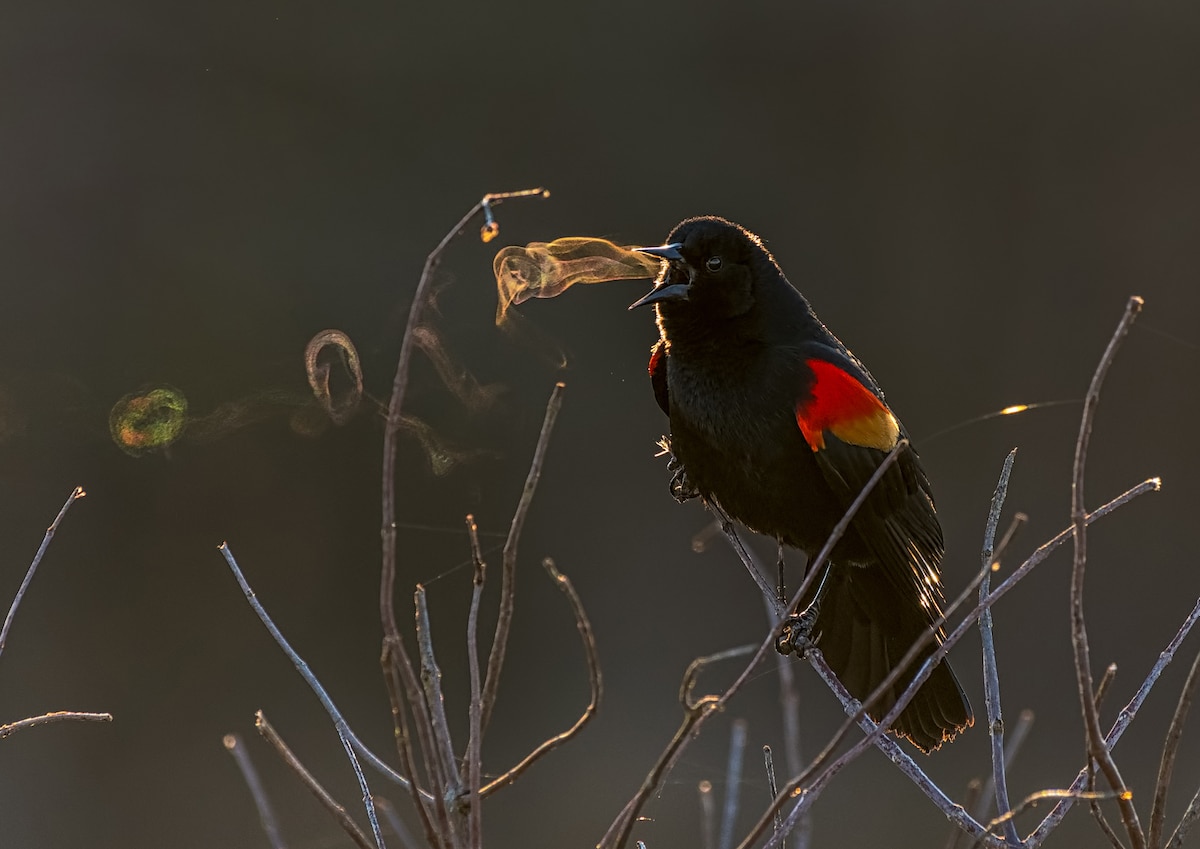 Red-winged Blackbird by Kathrin Swoboda. Grand prize winner, 2019 Audubon Photography Awards. Location: Huntley Meadows Park, Alexandria, Virginia.
“I visit this park near my home to photograph blackbirds on cold mornings, often aiming to capture the “smoke rings” that form from their breath as they sing out. On this occasion, I arrived early on a frigid day and heard the cry of the blackbirds all around the boardwalk. This particular bird was very vociferous, singing long and hard. I looked to set it against the dark background of the forest, shooting to the east as the sun rose over the trees, backlighting the vapor.”

The grand prize winner is amateur photographer Kathrin Swoboda, whose photograph of a red-winged blackbird singing on a cold Virginia morning earned her the $5,000 award. Swoboda’s incredible photograph shows off her keen observational skills, as she captured the “smoke rings” created as the birds sing out their songs in the cold morning air. An expert panel of six judges evaluated the work based on its technical quality, originality, and artistic merit and deemed it the most worthy of the top prize.

One new category is Plants for Birds, which honors Audubon’s Plants for Birds program. This initiative highlights the importance of native plants to wildlife. Supported by Coleman and Susan Burke, the program gives resources for finding native plant species based on zip codes. For the contest, photographers were given the challenge to capture the unique relationship that birds have with local plant life. Photographer Michael Schulte won the category for his beautiful photograph of a hooded oriole gathering palm fibers for her nest. Taken in San Diego, the photo also demonstrates how critical plant life is even in urban settings.

In a nod to recently retired Audubon creative director Kevin Fisher, the Fisher Prize was awarded to one image across all categories that pushes the creative boundaries of bird photography. Hand-picked by Fisher, the inaugural prize went to Ly Dang for her photograph of a Black-browed Albatross. Dang honed in on the beauty of the bird’s eye, which resulted in an artistic image highlighting this delicate part of the Albatross’s anatomy.

Scroll down to view more award-winning bird photography from the 2019 Audubon Photography Awards.

The winners of the 2019 Audubon Photography Awards were awarded for their exceptional bird photography. 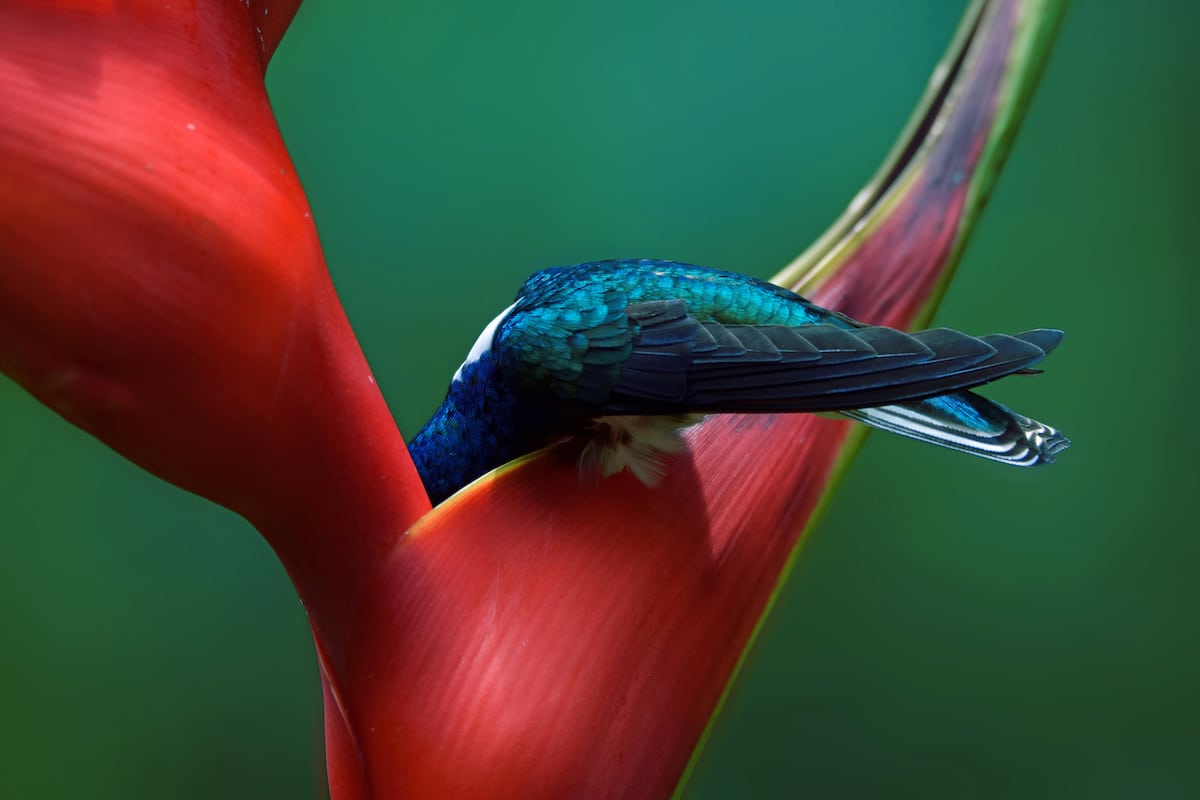 White-necked Jacobin by Mariam Kamal. Amateur winner. Location: Dave and Dave’s Nature Park, Sarapiqui, Costa Rica.
“On my fifth trip to Costa Rica, my favorite birding spots produced a few measly sightings. So I drove six hours to a reforestation site, which turned out to be well worth the trip. For an hour I photographed a valiant troop of White-necked Jacobins consuming nectar from heliconias that swayed and bobbed in a forceful wind. I could barely breathe as I snapped—I felt that I, too, was fighting to hang on!” 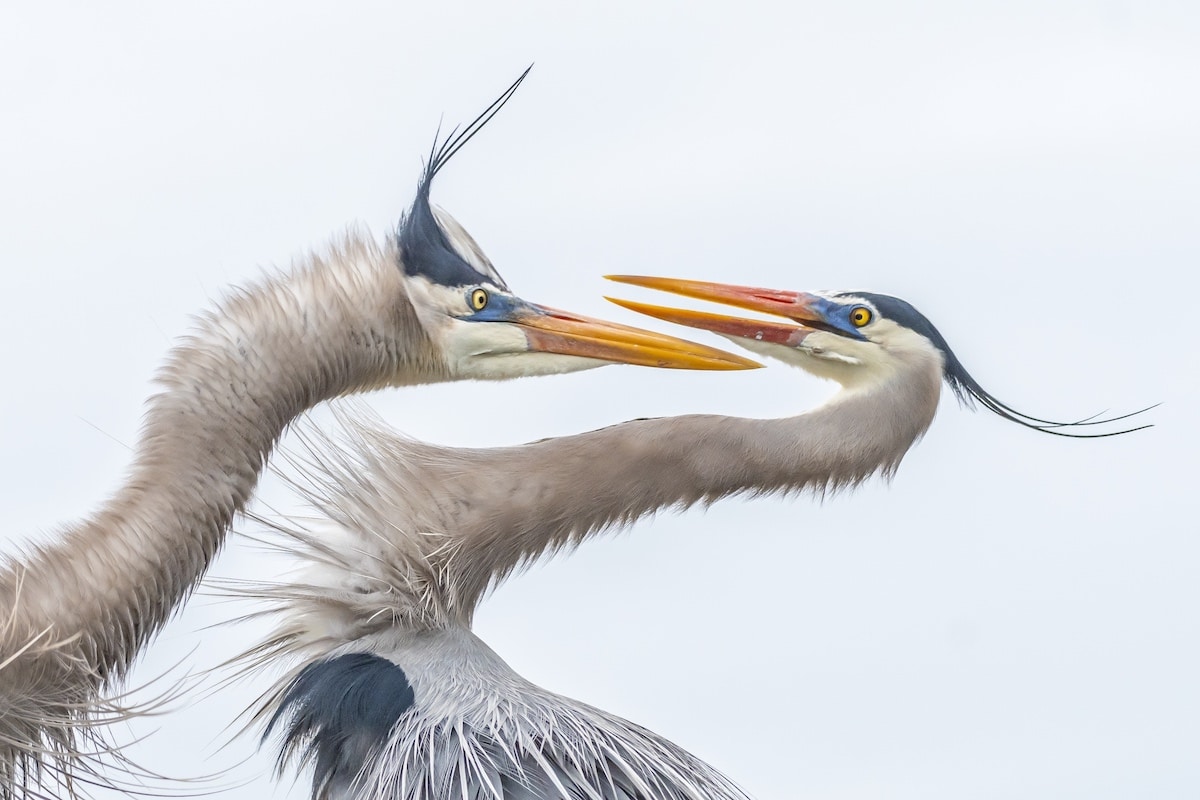 Great Blue Heron by Melissa Rowell. Amateur honorable mention. Location: Wakodahatchee Wetlands, Delray Beach, Florida.
“A storm was on the horizon when I arrived at one of my favorite wetlands. These herons immediately grabbed my attention: The male, obviously attempting to entice the female, was doing a stretch display. I love this mating ritual and decided to spend some time with them. When serious bill duels erupted between the pair, I was fascinated by their intense expressions as they sparred. The drama was further heightened as, thunder rumbling in the distance, the wind picked up, accentuating their long, flowing plumes.” 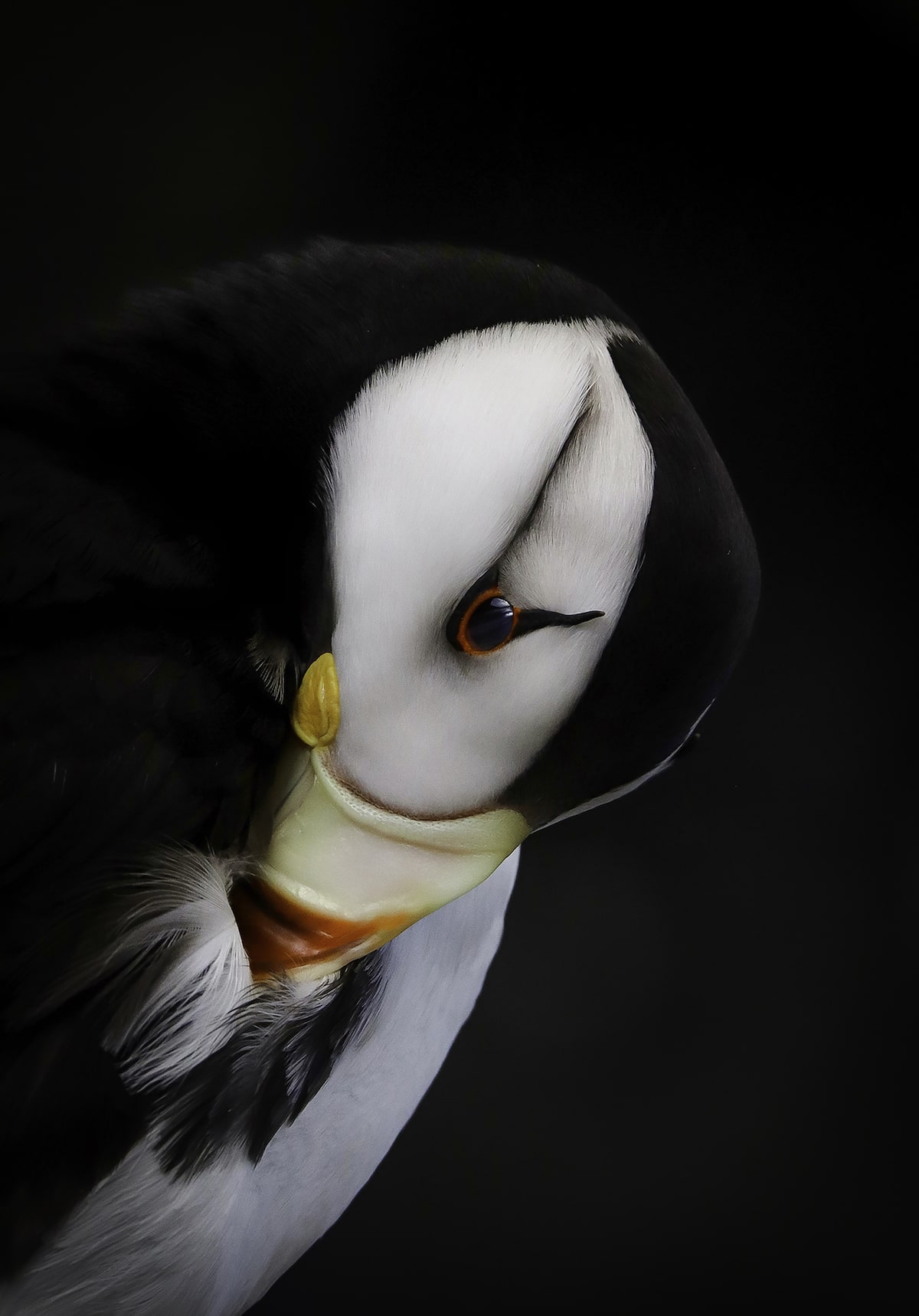 Horned Puffin by Sebastian Velasquez. Youth winner. Location: Alaska SeaLife Center (accredited by the Association of Zoos and Aquariums),
Seward, Alaska.
” Traveling through Alaska I saw Horned and Tufted Puffins from afar, always hoping to get closer. I got my chance at the SeaLife Center. Amid the chaos of native birds swimming, fishing, and zipping past me, I waited for hours for the perfect shot. At last I spotted this secluded puffin in a moment of stillness, preening its feathers, providing a glimpse into a seemingly private moment.” 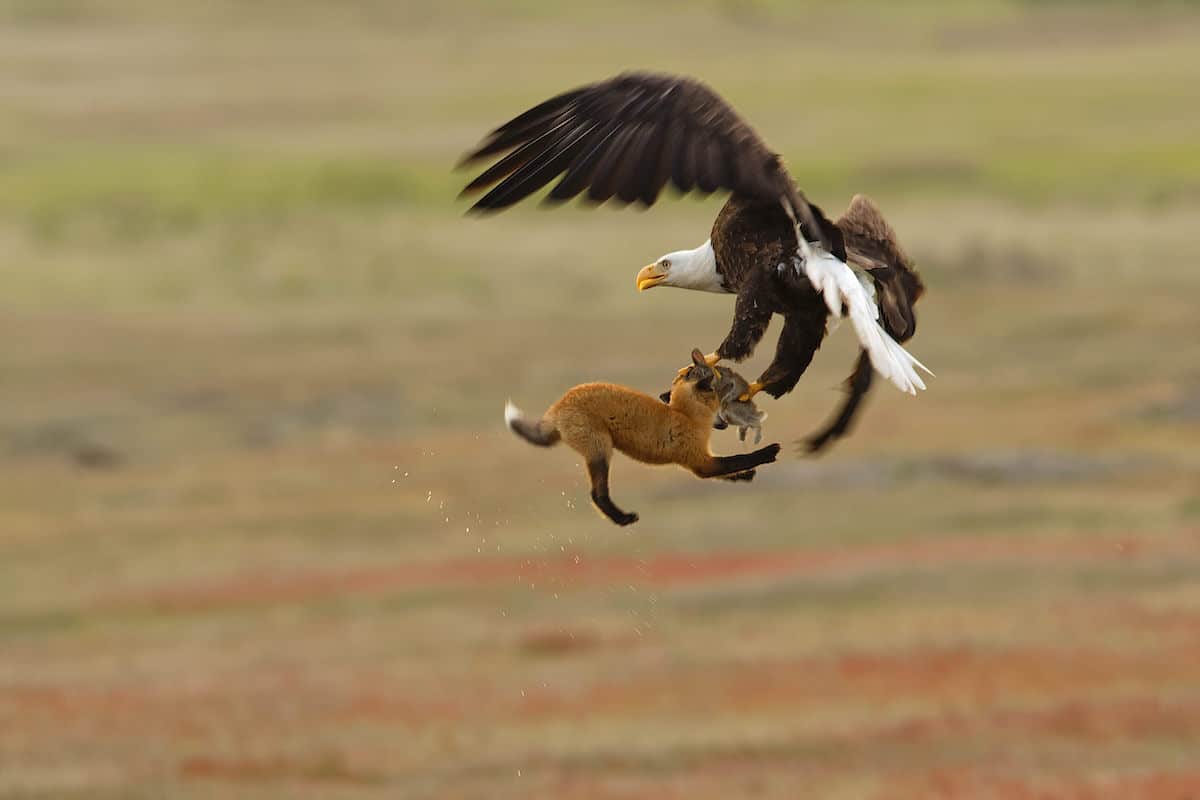 Bald eagle by Kevin Ebi. Professional honorable mention. Location: San Juan Island National Historical Park, Friday Harbor, Washington
“I had spent the day photographing foxes and was panning with this kit running with its prey when an unmistakable cry made me look up. I just knew the eagle racing our way was after the fox’s rabbit. I expected to have only a split second to capture the theft in one explosive frame; instead the eagle snagged the fox and rabbit, carrying both 20 feet off the ground. After eight seconds it dropped the fox, seemingly unharmed, and flew away with its stolen dinner.” 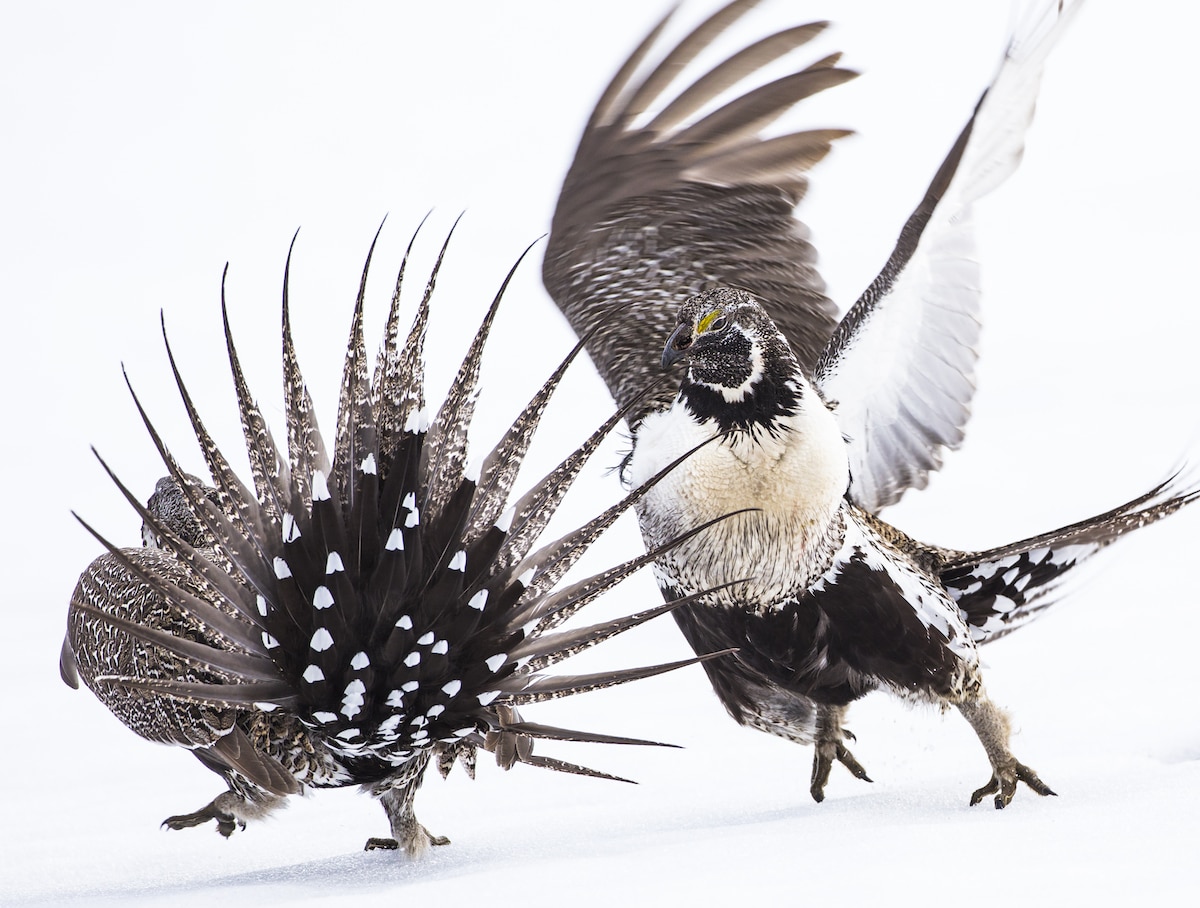 Greater Sage-Grouse by Elizabeth Boehm. Professional winner. Location: Pinedale, Wyoming.
“I spent a number of cold spring mornings photographing the courting display of the Greater Sage-Grouse from a blind on the perimeter of the lek. Along with the strutting, I watch for the dominance fights between males. The two contestants sit side by side until, upon some invisible cue, they suddenly throw blows, hitting each other with their wings. This photo, captured on hard snowpack, shows the power they exhibit when they are fighting for mates.” 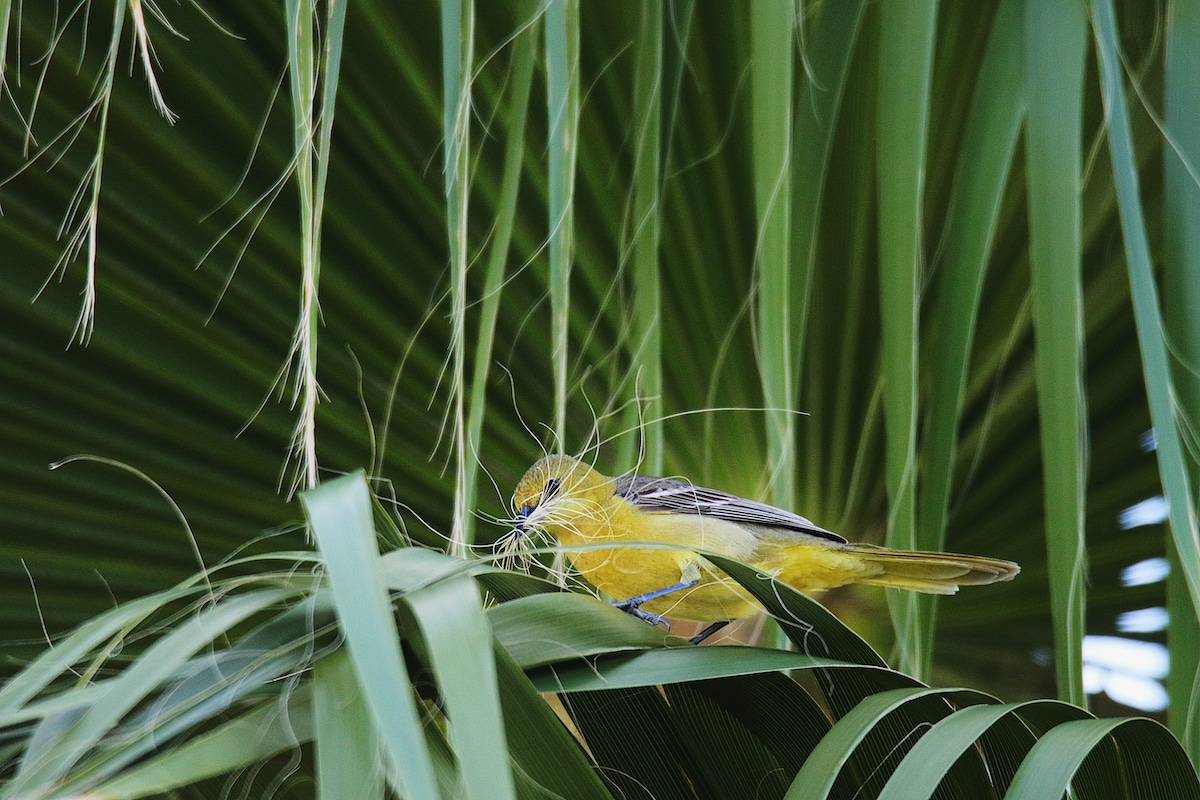 Hooded Oriole on a California fan palm by Michael Schulte. Plants For Birds Winner. Location: San Diego, California.
“Soon after moving to San Diego last year, I noticed a pair of orioles that frequented the California fan palm in my backyard. When I saw the female gathering palm fibers for a nest, I grabbed my camera. I love this shot; it shows the relationship between two native species and illustrates the natural beauty to be appreciated even in a city. And the radiating palm fronds behind the female give a sense of radiance to her diligent efforts.” 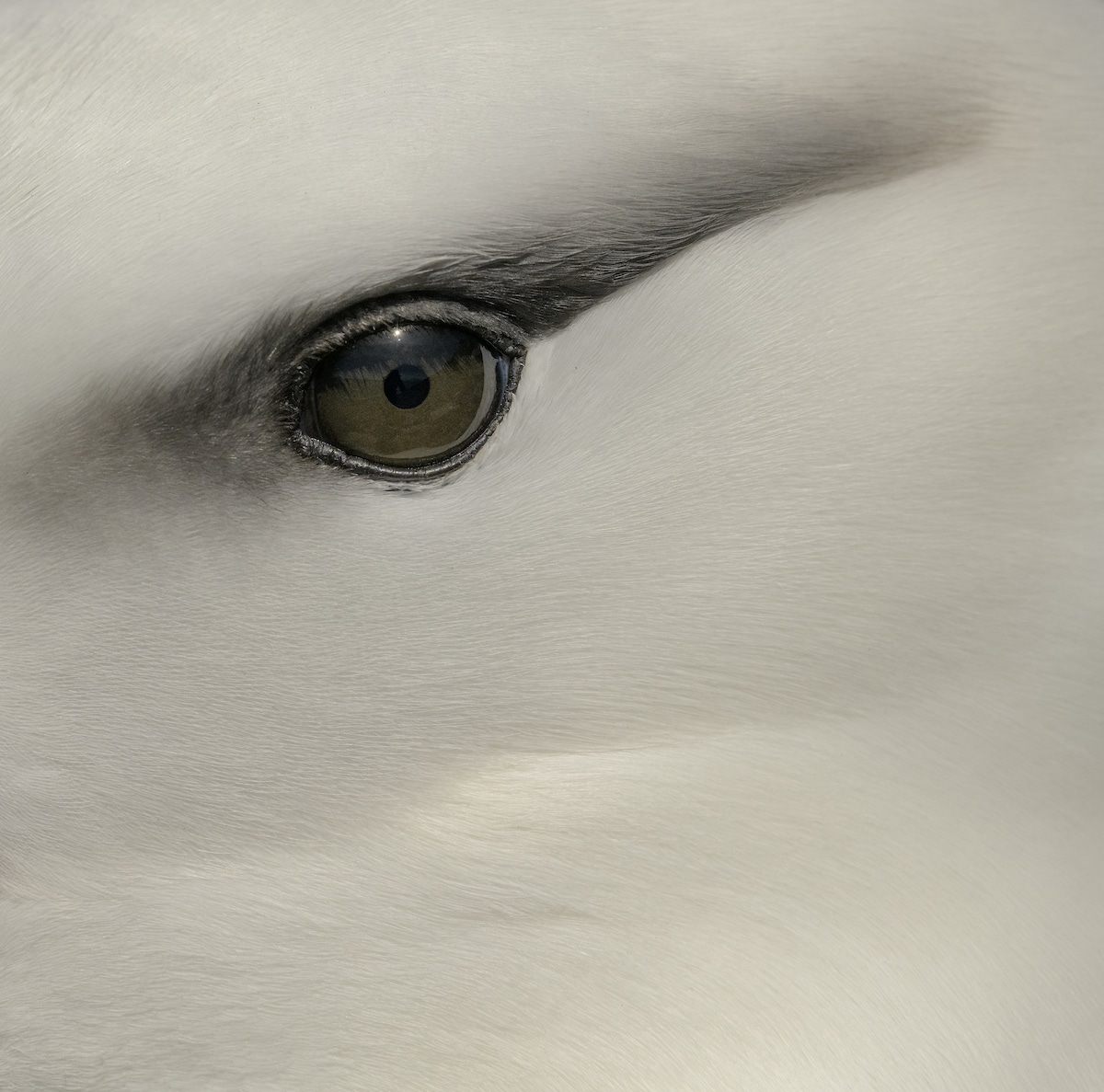 Black-browed Albatross by Ly Dang. Fisher Prize winner. Location: Saunders Island, Falkland Islands.
“On a steep, windy slope of Saunders Island, several breeding colonies of Black-browed Albatrosses were tending their chicks and squawking at the neighbors to urge them to respect the territories. As I sat watching the birds conducting their daily activities, I started to notice the simple, elegant beauty of the adults’ eyes. After several positions looking for a clear view and a good light angle, I took this shot.” 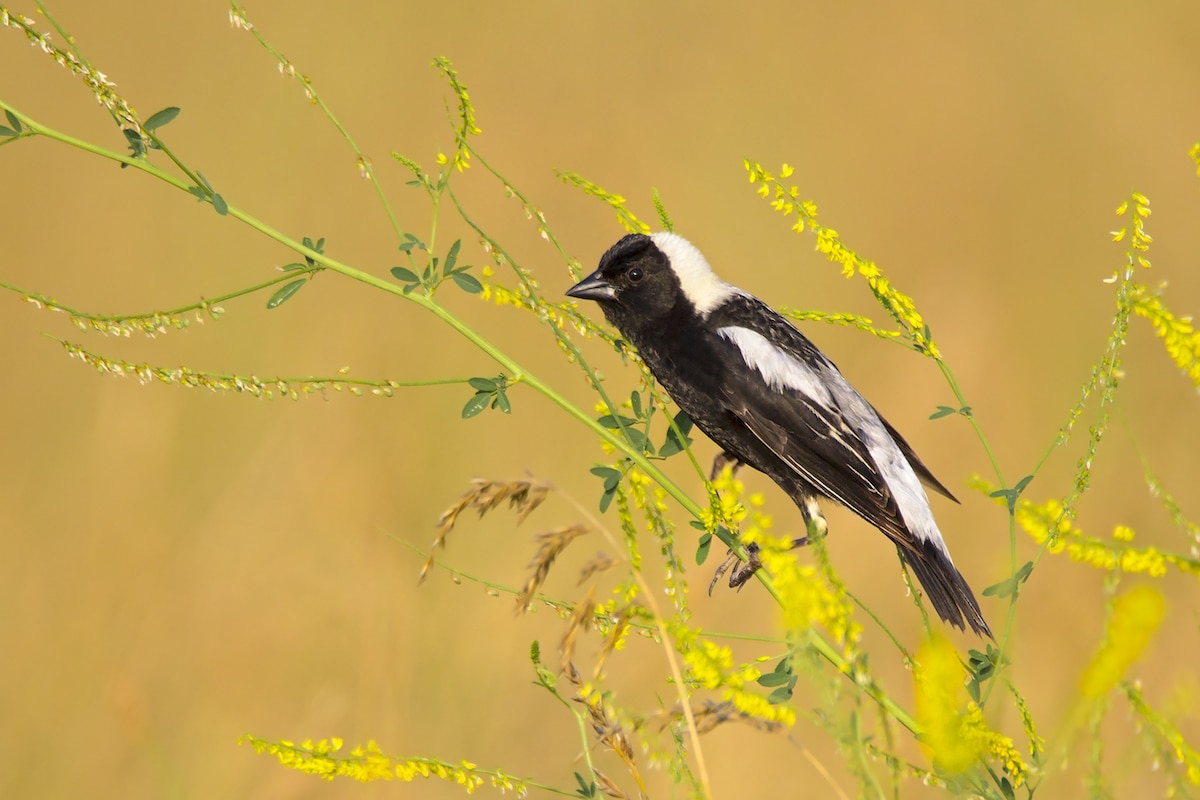 Bobolink by Garrett Sheets. Youth honorable mention. Location: Dunn Ranch Prairie, Lincoln Township, Missouri.
“At sunset the Dunn Ranch Prairie becomes a field of golden grasses, which provided a perfect setting for this male as he perched briefly for a curious glance at my camera. The robotic tone of his song was echoed by dozens of other Bobolinks as they flew overhead. I was almost too excited to take the photo, but I secured a burst of photos before he took off, flying far out over the grasses.” 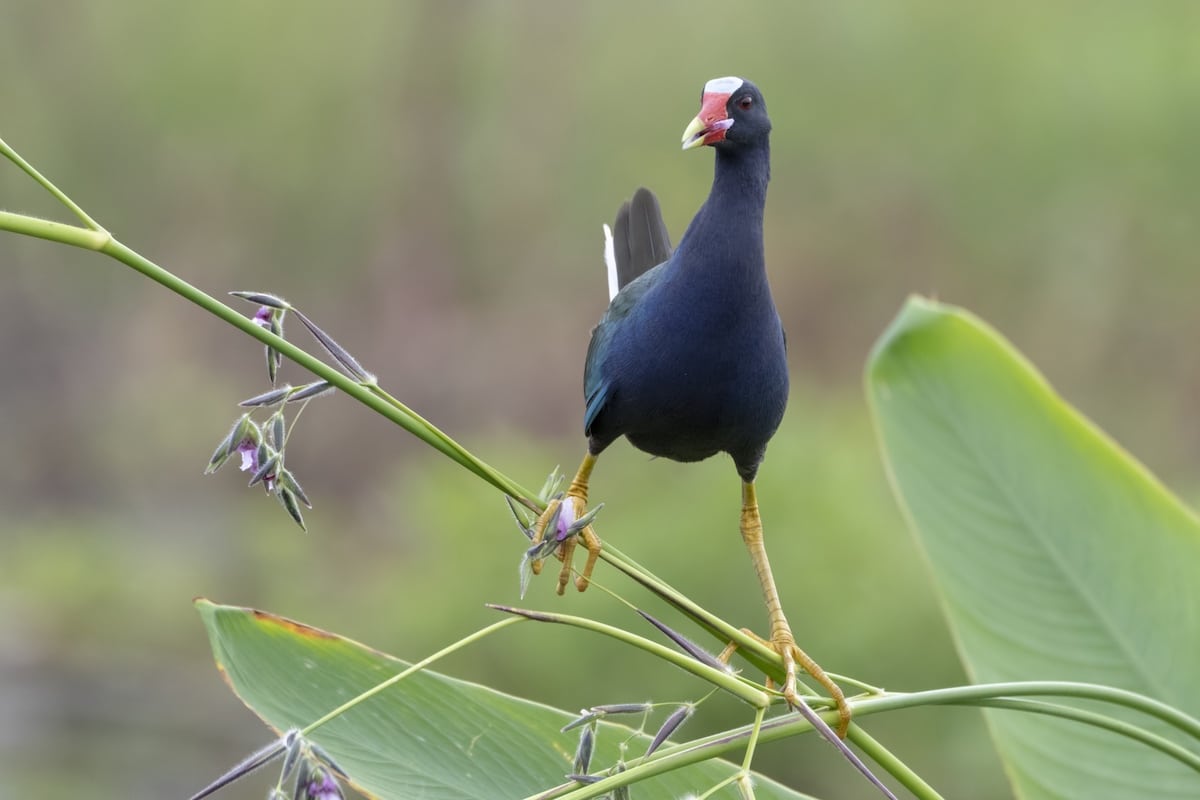 Purple Gallinule on a fire flag by Joseph Przybyla. Plants for Birds honorable mention. Location: Circle B Bar Reserve, Lakeland, Florida.
“The normally elusive Purple Gallinule comes into the open when fire flag blooms, climbing the plant to feed on its flowers. I spotted this one making its way up the plant mid-morning on an overcast day, eating as it went. I set up with my monopod and camera, watching, waiting. When it reached the top, I captured images as it moved from stem to stem, moving quickly, side to side, up and down, choosing the best angle, and ultimately getting this photo of the bird mid-snack.”

Interview: Photographer Sets Up Stages in Backyard for Birds That Come to Visit 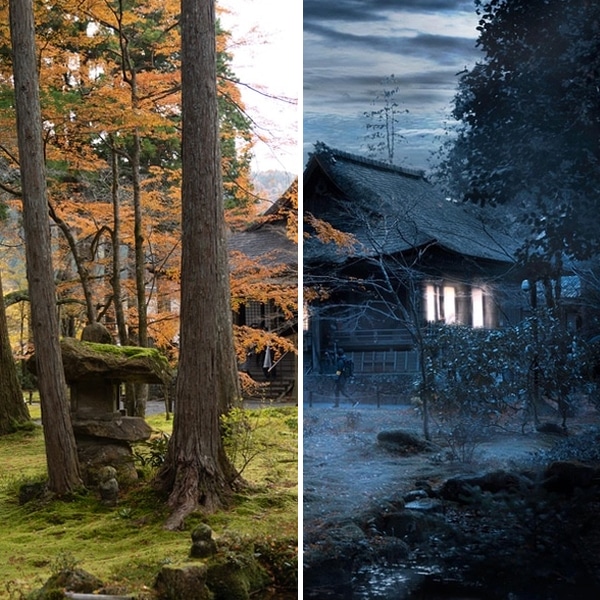 Photographers Show Off Their Image Editing Skills in Japan-Themed Contest 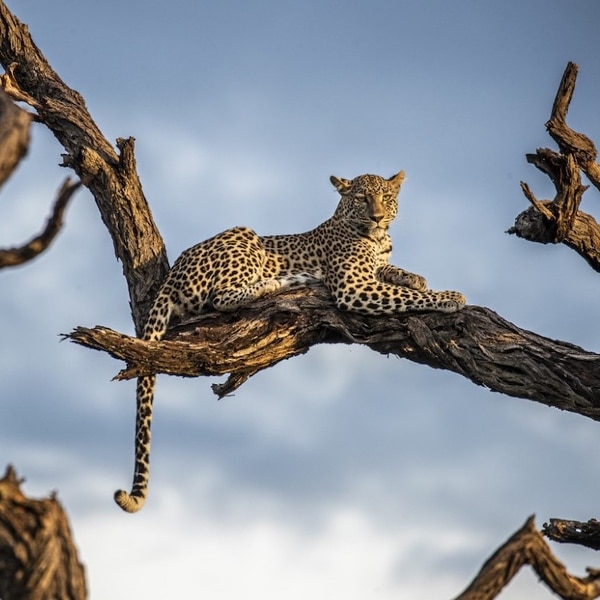