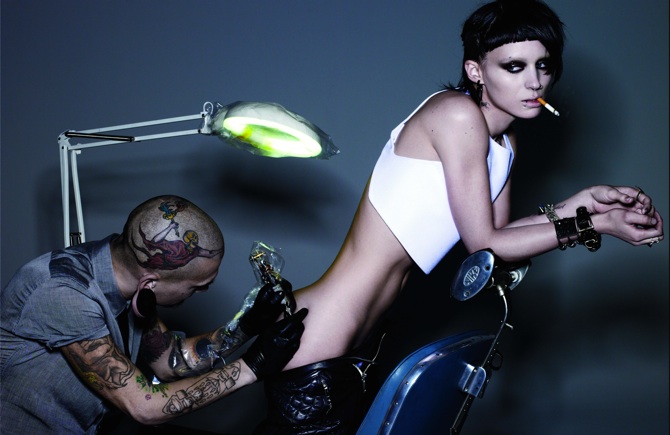 Disclosure: This post is part of an upcoming sponsorship with the movie The Girl with the Dragon Tattoo.

While we're all used to seeing Hollywood actresses dolled up for red carpet events like the Oscars or the Golden Globes, we're more amazed when they leave all that glitz and glamour behind to transform themselves into something completely different. Today, we've compiled a list of modern-day actresses who have done just that. While in some cases they've endured hours in the make-up chair, other times they've taken drastic, highly disciplined steps to morph right in front of our very eyes. Here, then, is our list of the six most stunning actress transformations from recent and upcoming movies.

Rooney Mora as Lisbeth (The Girl with the Dragon Tattoo) 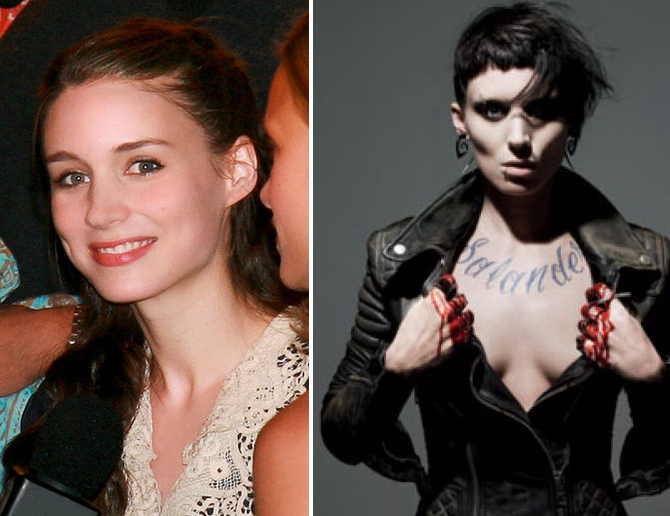 How does a seemingly sweet girl who was last seen as Mark Zuckerberg's pretty, quick-witted girlfriend in The Social Network, show that she can play a androgynous, bisexual computer hacker? Better yet, how do you beat out A-list actresses like Natalie Portman and Scarlett Johansson for the role in David Fincher's latest movie? You not only show the director that you can handle a highly charged rape scene, you dramatically alter your appearance. To prepare for the role of Lisbeth Salander in The Girl with the Dragon Tattoo, actress Rooney Mara had her lip, brow, nose, and nipple pierced, her eyebrows bleached and her hair chopped. (Can't wait for this movie? Sony recently released an 8-minute clip on iTunes which you can watch here. The movie gets released on December 21.)

Michelle Williams as Marilyn Monroe (My Week with Marilyn) 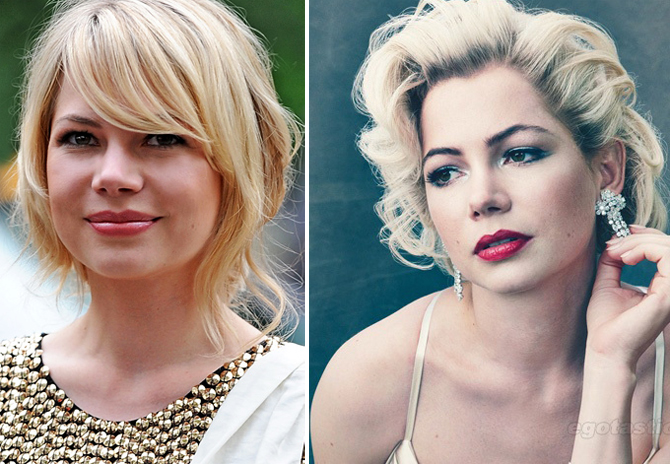 The recently released film My Week with Marilyn is already getting 31-year-old actress Michelle Williams rave reviews for her amazingly realistic portrayal of the blond bombshell. Williams told Vogue that to prepare for the role, she started putting on weight, but it changed the way her face looked. Instead, she decided to stay slim and wear hip padding. She explained: “So at some point it became a question of, Do I want my face to look like Marilyn Monroe's or my hips?” To get all of the subtle nuances of Marilyn down, she would research the legendary actress to no end. “I'd go to bed every night with a stack of books next to me,” she said. “And I'd fall asleep to movies of her. It was like when you were a kid and you'd put a book under your pillow hoping you'd get it by osmosis.” 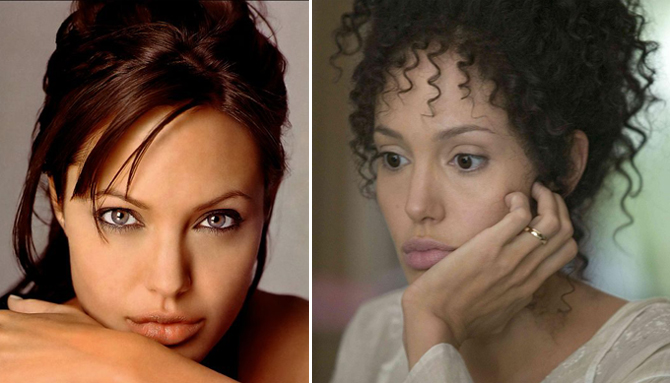 Born to a Dutch father and a Cuban mother of Afro-Chinese-Cuban descent, Mariane Pearl is a mixed-race journalist who is the widow of Daniel Pearl, the Wall Street Journal reporter who was kidnapped and murdered by terrorists in Pakistan in early 2002. To everyone's surprise, Angelina Jolie was cast into this role. Although it drew criticism within the African American community, Jolie's performance was widely praised by top critics as her finest artistic achievement to date. Interestingly, it was Pearl who personally chose Jolie to play the lead. In response to casting complaints, Pearl said “I have heard some criticism about her casting, but it is not about the color of your skin. It is about who you are. I asked her to play the role–even though she is way more beautiful than I am–because I felt a real kinship to her. She put her whole heart into it, and I think she understood why we should do this movie. We had something to say that we knew we should say together.” 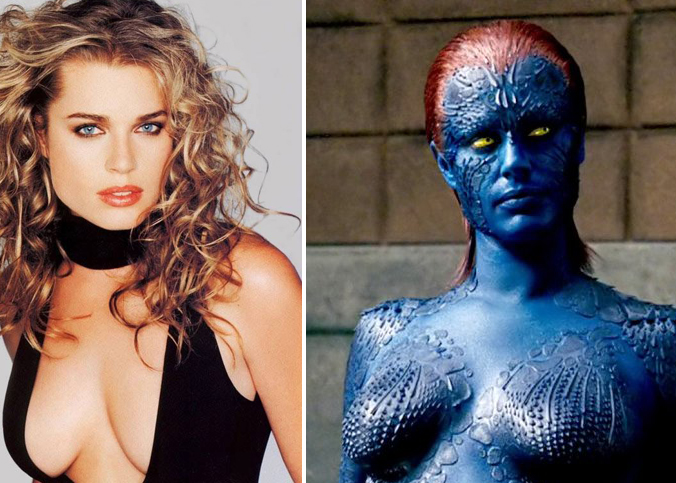 Talk about patience. For her most recognizable role to date, model turned actress Rebecca Romijn Stamos had to endure eight to nine hours in the make-up chair for the original X-Men movie. Her transformation involved four women putting nearly 100 individual prosthetic pieces, made of silicon, over her otherwise naked body. The grueling make-up process did ease up for X2, with the time cut nearly in half. “We're not using the same kind of paint. We're not using the same kind of glue,” she told Comics Continuum. “They've completely changed the process and they've gotten down to under four hours now, which is huge for me.” 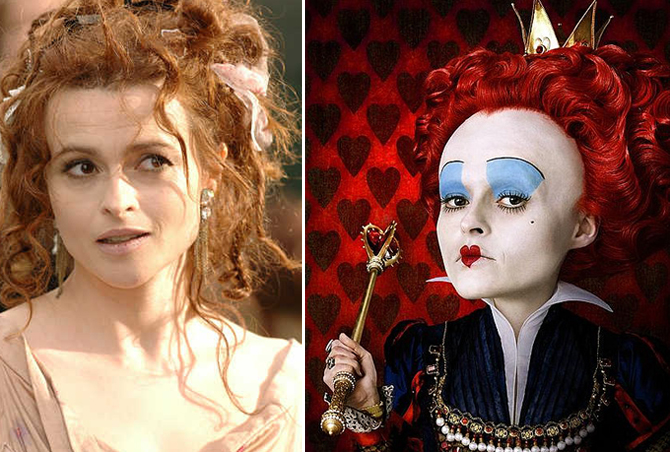 To play The Red Queen, Helena Bonham Carter had to endure two and a half hours in the makeup department on the set of Tim Burton's Alice in Wonderland. Her head, however, was blown up to twice the size of what is normal in post-production. The enormous head was masterminded by the visual effects team from Sony Pictures Imageworks. A green screen stage and a special, high resolution camera were used to create the wickedly cool effect. “The queen's head was something we had to be careful to account for all the time,” visual-effects supervisor Ken Ralston said. “We had to remind people to back away from Helena in their scenes to give her head enough room.” 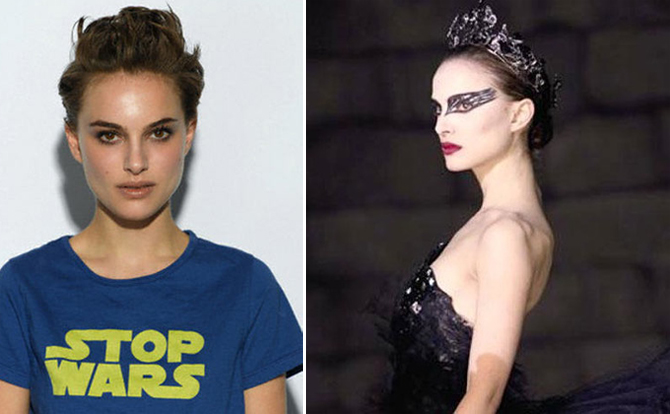 To transform herself into a believable ballerina, actress Natalie Portman trained for months with former professional ballerina Mary Helen Bowers for up to eight hours a day with only one day off a week. She also lost 20 pounds off her already petite frame. Black Swan director Darren Aronofsky asked her to shed the weight so she could look ballerina-thin. “Darren said to me before the film, ‘How much weight do you think you can lose without getting sick?'” Luckily, her amazing transformation was all worth it as Natalie Portman won the Academy Award, the Golden Globe Award, the Screen Actors Guild Award, and the BAFTA Award for her riveting performance of Nina Sayers in Black Swan.

Which of these transformations were you most impressed with?