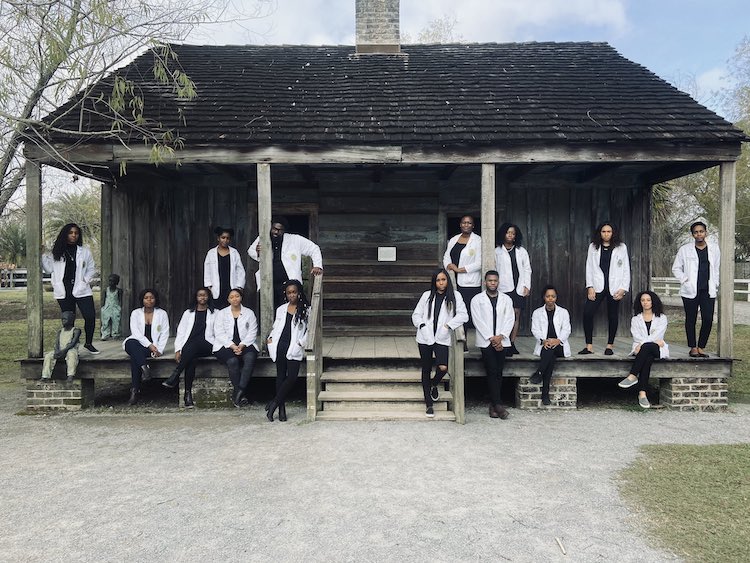 More than 150 years after slavery was abolished in the United States, a group of African American Tulane medical students is honoring their ancestors by demonstrating just how far they've come since that time. Organized by second-year medical student Russell J. Ledet, fifteen students posed on the steps of former slave quarters at the Whitney Plantation in Louisiana. Since the images from the shoot have been posted to Twitter they've been retweeted over 20,000 times and liked by more than 85,000 people.

The statement-making photograph is having the effect that the students hoped. All the participants are members of the Tulane chapter of the Student National Medical Association, which helps support black medical students. By coming together in a place with such a difficult history, they hope to provide inspiration for future generations of African American doctors.

Sydney Labat, another second-year medical student in the photo, says that the group made a conscious effort to look determined and embody strength as they prepared for the photograph. She added that the image proves that “you can be smart, you can be a doctor, you can be unapologetically black—all of those simultaneously.”

We are our ancestors’ wildest dreams.✨

In the background, an original slave quarter.
In the foreground, original descendants of slaves and medical students. #whatatimetobealive #yeahwecandoboth pic.twitter.com/INOUMmc1cx

The group's very presence on the plantation, which is now a museum, is a call to remember the past while looking toward the future. And the group hopes that their hard work as medical students sends an uplifting message. For Labat, who grew up in rural Mississippi, the photograph is also a way to give back. As a child, it was rare that she saw black people in positions of authority.

“If I had seen this photo when I was younger, it would have been validation that the people telling me that I couldn't be an orthopedic surgeon—that I should have a Plan B, but they didn't say that to my white classmates—that they can't hinder me in any way,” she shared.

It's a particularly powerful message when one considers that African American medical school enrollment continues to lag behind. While the Association of American Medical Colleges reports that the proportion of medical students who identified as African American or black rose from 5.6% in 1980 to 7.7% in 2016, that's still far below the 13.2% of the general population. Over the past decade, many medical schools have made a concerted effort to boost African American enrollment and graduation rates.

This is particularly important for the overall health of the African American community. “Patients do better when they are taken care of by people who look like them,” Dr. Mia Mallory, Associate dean for diversity, equity, and inclusion at the University of Cincinnati Medical School, told USA Today. “So we're trying to grow talented physicians that look like them and are more likely to go back into the community they came from.”

By putting their faces forward, these Tulane Medical Students are showing others that anything is possible, while also making their ancestors proud. “I could just imagine our ancestors in heaven looking at us and being so happy,” said Ledet. “They're saying, ‘Look at them. They're doing so well. Their resiliency is shining.' ”

Inspired? Share
Like My Modern Met on Facebook
Get Our Weekly Newsletter
Become a
My Modern Met Member
As a member, you'll join us in our effort to support the arts.
Become a Member
Explore member benefits
Inspired?