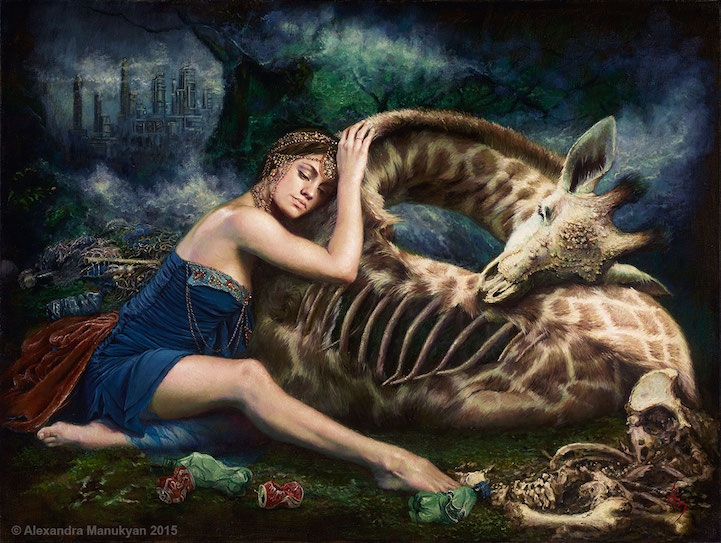 Known for her darkly beautiful and surrealistic oil paintings of young women, Armenian-born, California-based artist Alexandra Manukyan explores a new direction in Oracle of Extinction–a collection of powerful works that highlight humanity's catastrophic impact on the environment, and how our behavior will affect the future of our planet. The series, which is currently on display at Copro Gallery in Los Angeles through September 5, pairs Manukyan's familiar, regal heroines with animals that have suffered at the hands of mankind. Reduced to skin and bones, their pitiful forms choked by waste and debris, the creatures are left to the mercy of the goddess-like figures.

Although painted using traditional methods in a classical style, Manukyan's artwork is connected immediately to the present reality of melting icecaps, rising sea levels, overflowing landfills, and industrial smokestacks spewing more and more pollution into the air. The queenly female subjects, who appear in both ornate dresses and flowing gowns made of trash bags, balance crowns of waste and nature on their heads, signifying the weight of the world on their shoulders as they maintain a fragile balance between a grim future and the possibility of salvation.

We were lucky enough to ask Manukyan a few questions about her new series and creative passion. Scroll down to read that exclusive interview. 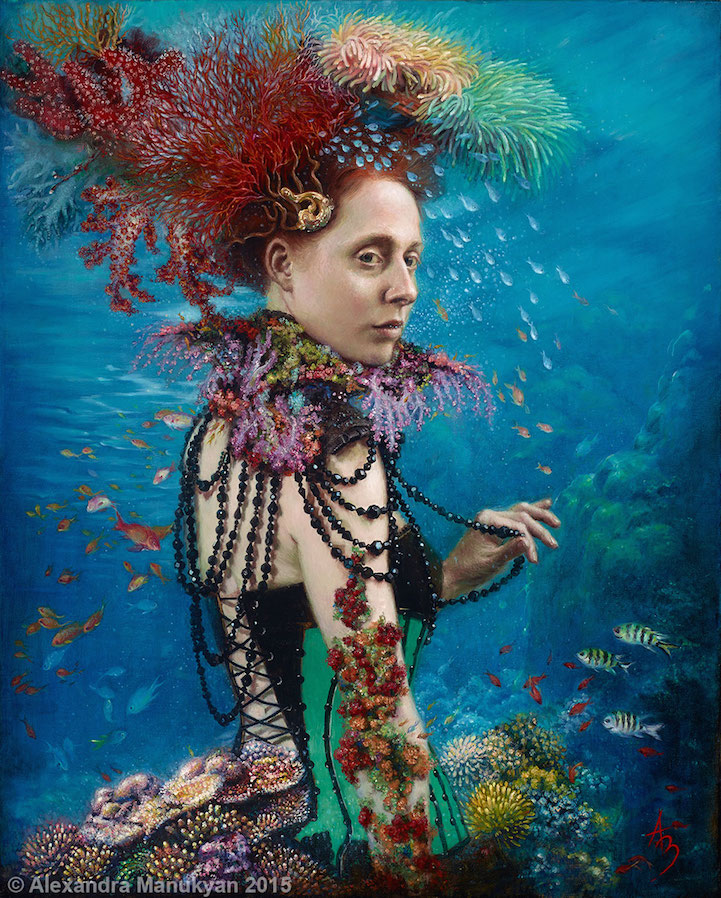 Can you tell us more about how you became an artist, and how you came to develop your signature style of painting?

I grew up in Armenia, where I majored in Fine Arts in college and university. But here in the States I studied and majored in Fashion Design and Graphic Design, and I worked in these industries for many years. I also studied at the Los Angeles Academy of Figurative Art, and I took many private atelier courses, which refined my art skills and thinking.

We are all subconsciously and inevitably influenced by the culture we grew up in. I think that my influences are a combination of my various backgrounds and my cultural heritage, and these experiences played a huge role in developing my conceptual and artistic vision. Also, this collective knowledge in visual arts provided me with tools and techniques that allowed me to be more versatile, and to develop my signature style. 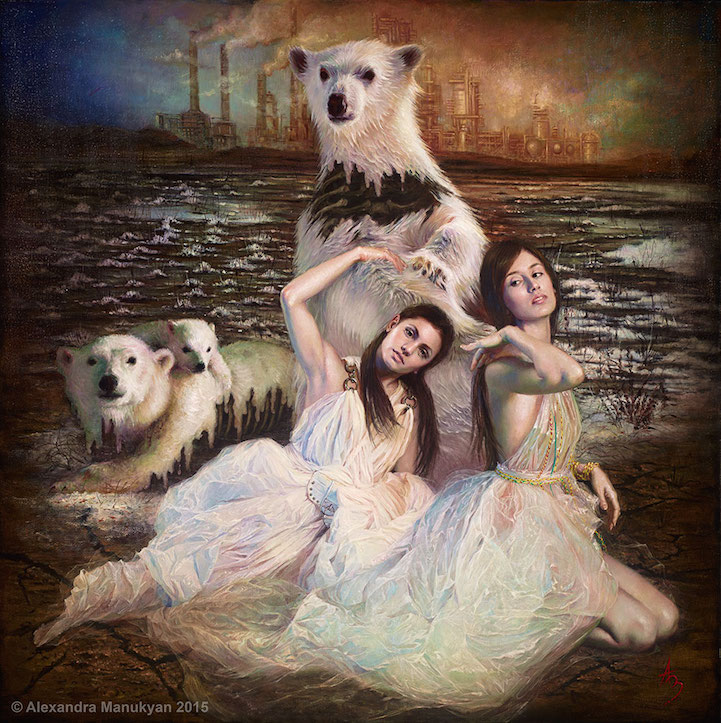 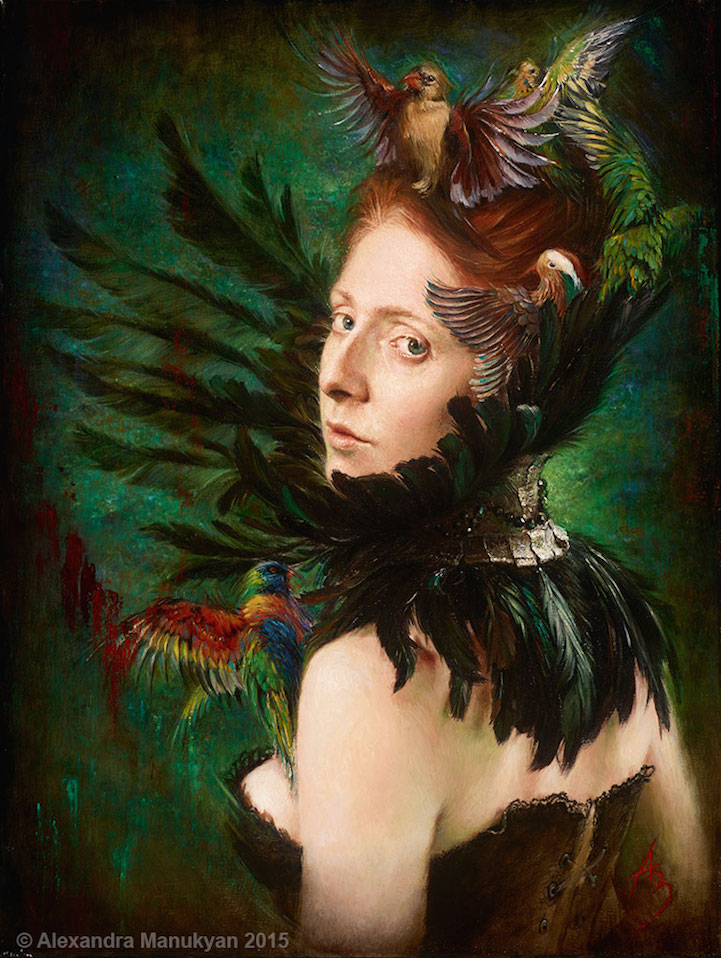 What message do you hope to send with Oracle of Extinction?

Oracles of Extinction explores the damaging factors of human behavior on our environment and the future of our planet. From oil spills to overflowing landfills, man's unsustainable quest to live a better life with little regard for the environment has caused a staggering amount of environmental disasters. The biggest and most important experiment on Earth is the one we're all conducting, right now, on Earth itself. At present, pollution is labeled to be the #1 killer, affecting more than 100 million lives worldwide. More than 1 million seabirds and 100 million mammals are killed by pollution every year. Obviously, change is needed. 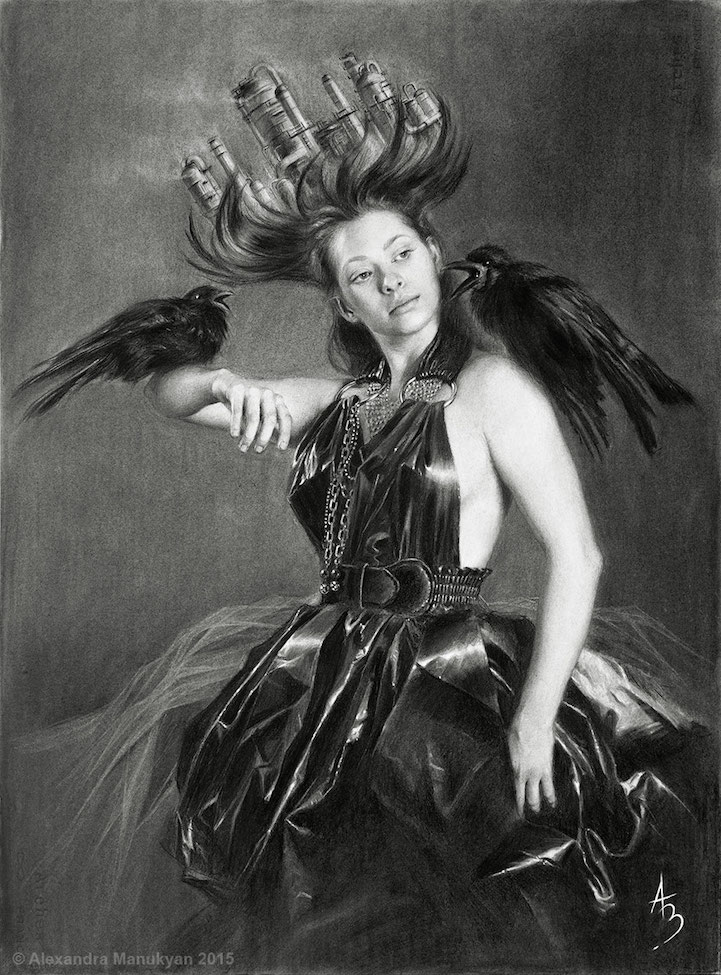 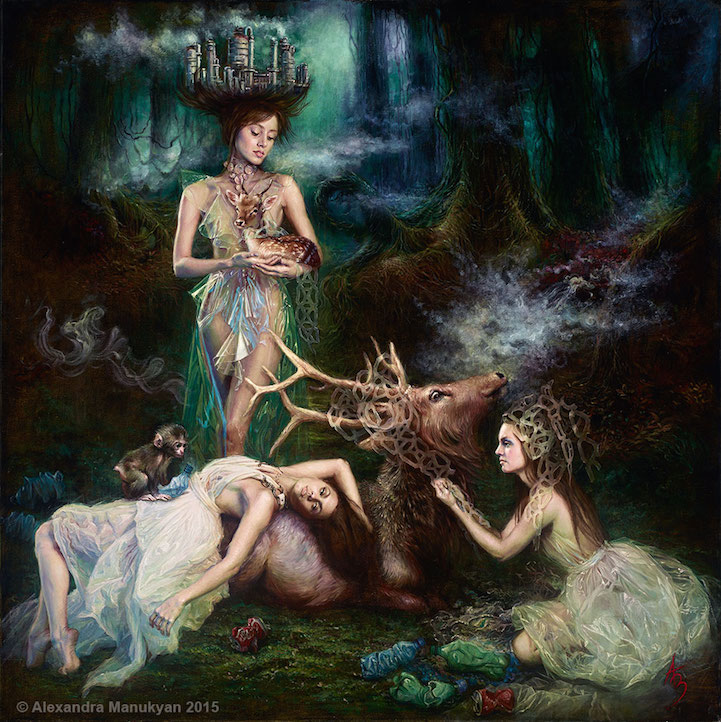 Do you think art can inspire change?

I think art can absolutely inspire change. I have received so many messages and emails from different people around the world who came across the images I was posting online on social media. The overwhelming response was about how deeply they were touched, moved, and disturbed by my paintings. So I guess the images do evoke certain feelings in viewers. 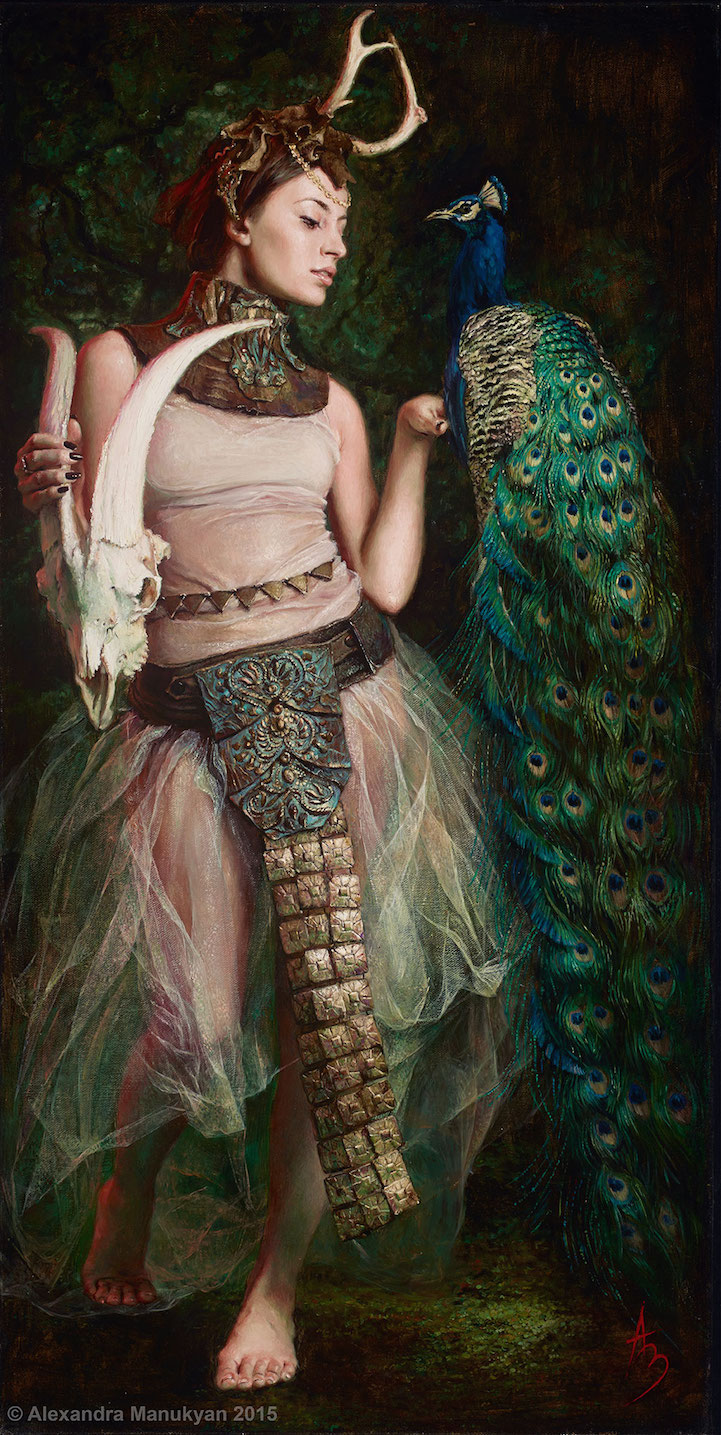 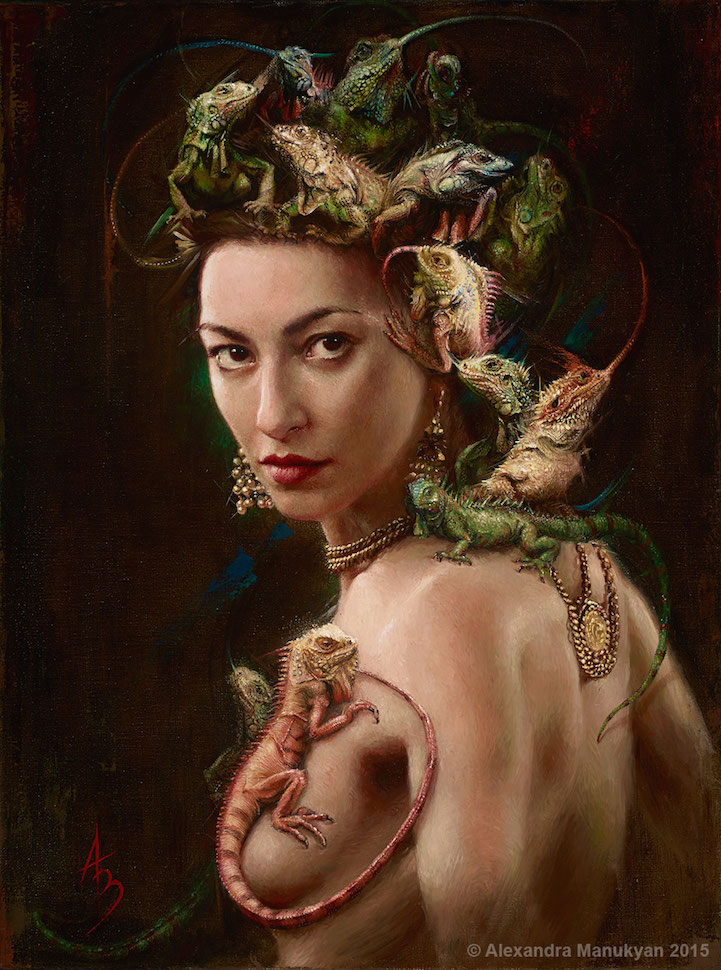 To you, what is the essence of being an artist?

The essence of being an artist, to me, is being honest with your own feelings. By that, I mean trying to express what your true feelings are, not imitating other artists who you think are successful for painting a specific theme or genre a certain way. Being really knowledgable and skilled in your craft are also essential. 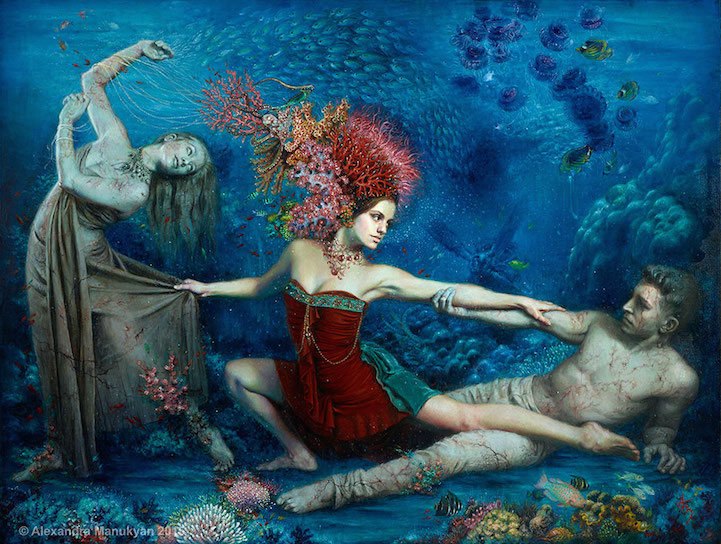 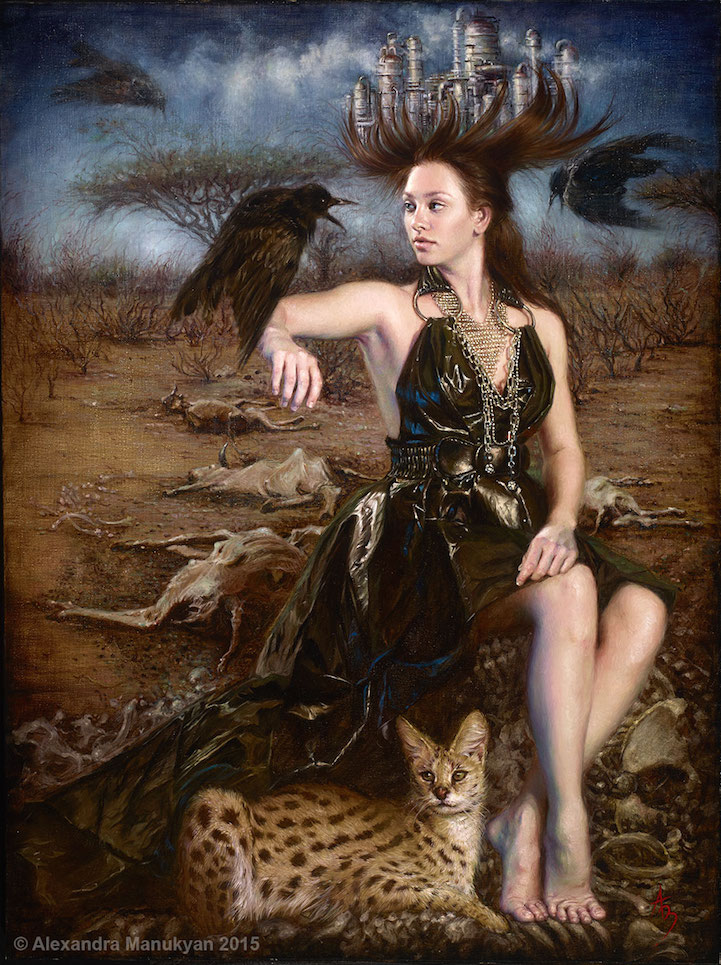 My Modern Met granted permission to use images by Alexandra Manukyan.