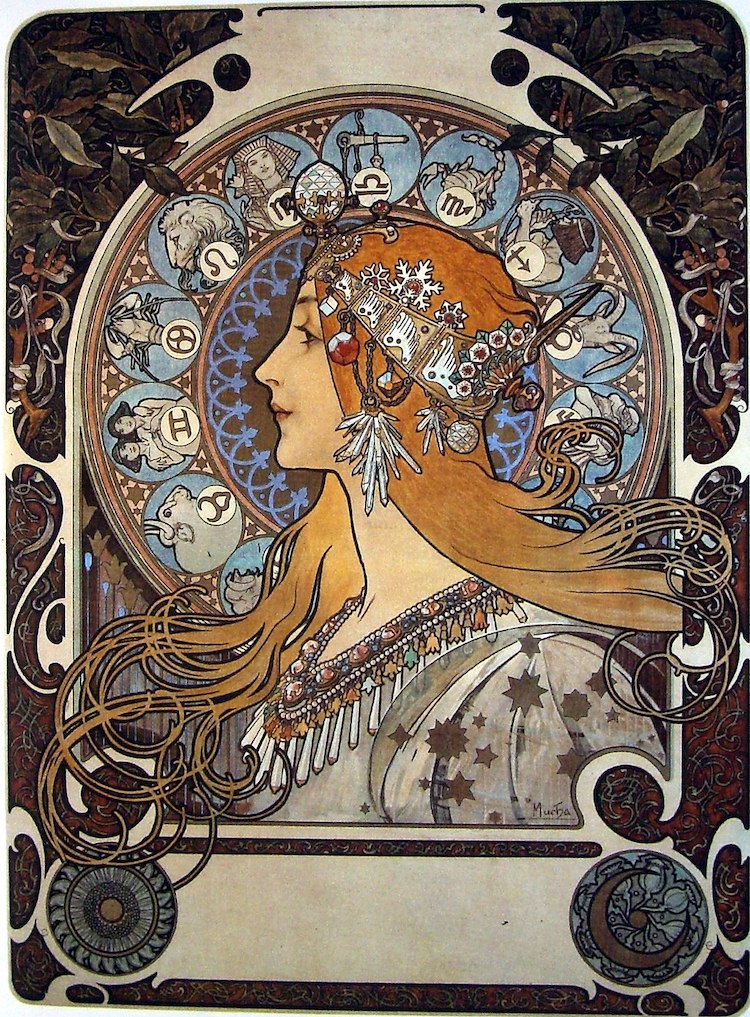 In a bid to counteract the academic art of the 19th century, a new creative movement began to take shape in Europe. Called Art Nouveau, it was aimed at modernizing design. It became a style that spread across many creative disciplines including architecture and applied art—but especially decorative arts. Artists drew inspiration from both organic and geometric forms that resulted in elegant designs which featured flowing, plant-like motifs and architectural shapes.

Czech artist Alphonse Mucha encapsulates the Art Nouveau movement like no other. He developed a distinct style that became known as “le style Mucha” and was internationally recognized as the “Master of the Art Nouveau poster.”

During the 19th century, art was only available to the elite in society. Mucha believed, however, that art should be available to everyone—no matter their social class. He worked with printer Champenois to create decorative panels, which were posters without text designed purely for decorating interior walls. This new medium marked the beginning of what became the art posters that we still style our homes with today.

“I was happy to be involved in an art for the people and not for private drawing rooms,” Mucha said of his mass-produced decorative panels. “It was inexpensive, accessible to the general public, and it found a home in poor families as well as in more affluent circles.”

Mucha explored six main themes while creating his panels. The first, titled The Seasons (1896), was so popular, that it was followed up by five more nature-inspired series. The Flowers (1898), The Arts (1898), The Times of the Day (1899), The Precious Stones (1900), and The Moon and the Stars (1902) all personify beautiful women in different ways. Read on to learn more about each series. 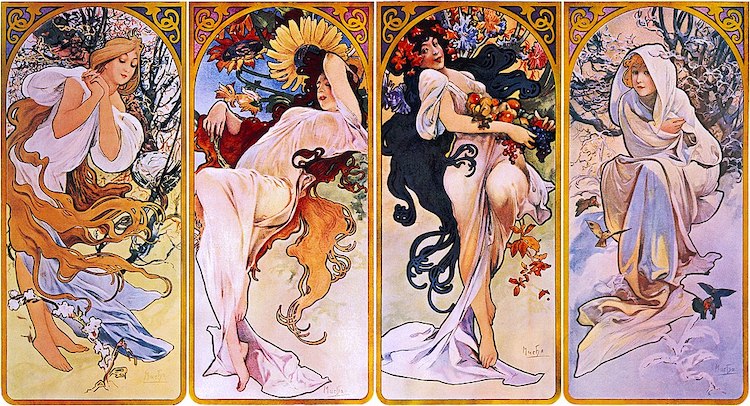 The Seasons was Mucha's first set of decorative panels and it became one of his most popular series. The artist was asked by Champenois to produce at least two more sets based on the same theme in 1897 and 1900. Personifying the four seasons was nothing new at the time since the Old Masters often interpreted spring, summer, autumn, and winter as human figures. However, Mucha’s style breathed new life into the theme. The artist captured the varying moods of the times of the year with four individual female characters: sweet Spring, seductive Summer, fruitful Autumn, and frosty Winter.

In The Flowers series, Mucha personified four flowers in his distinct style. A rose, iris, carnation, and lily are each depicted as women, wearing long flowing gowns and surrounded by their respective blooms. Even the subjects’ hairstyles appear to mimic the shapes of the petals and leaves.

Two of the original watercolor illustrations were exhibited at Mucha's solo exhibition at the Salon des Cent in 1897, but the entire set didn’t become available until the following year. The series was so popular that Champenois decided to print a smaller version with all four panels in a single image. 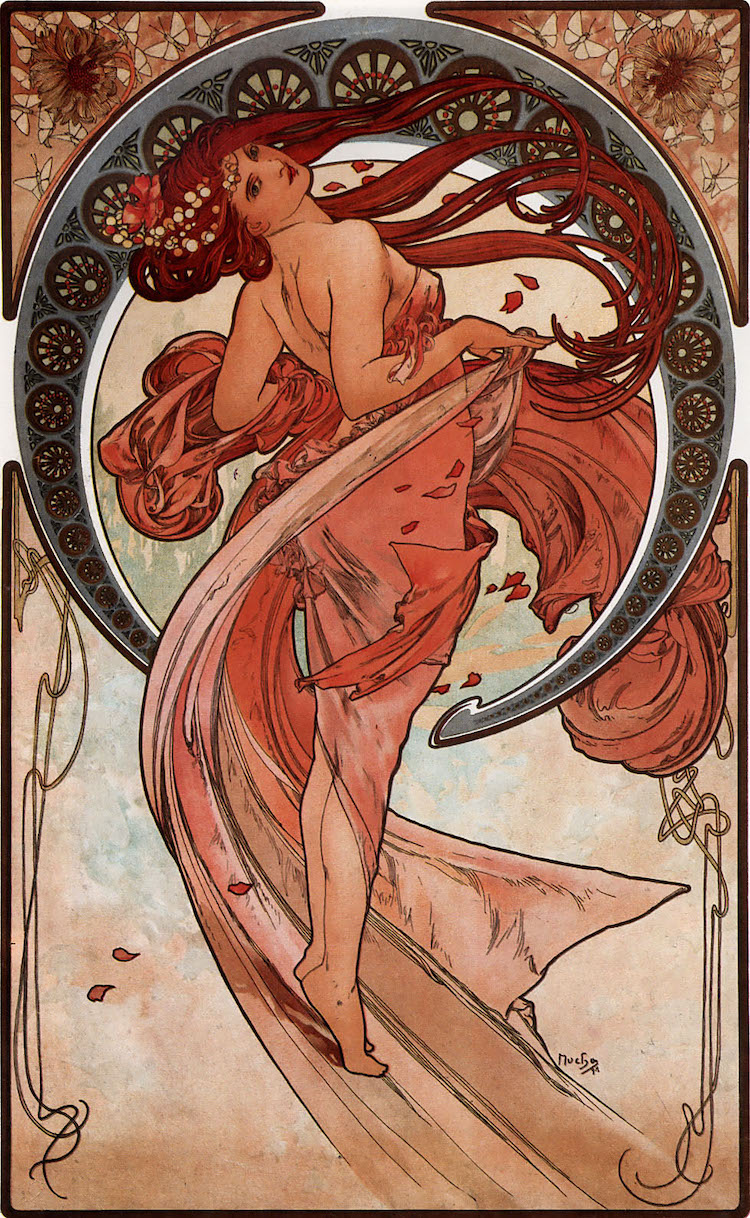 By 1898, Mucha had gained so much fame that he was able to start producing his prints on luxurious materials. The Arts series was printed on vellum in an edition of 1,000 copies, and an additional 50 limited edition copies printed on satin.

For The Arts series, Mucha embodied different art disciplines as women at certain parts of the day. Painting holds a red flower—symbolizing inspiration—during the day. Poetry contemplates as she gazes at the moonlit countryside. Music listens to birdsong at night while Dance sways in the daytime autumn breeze. 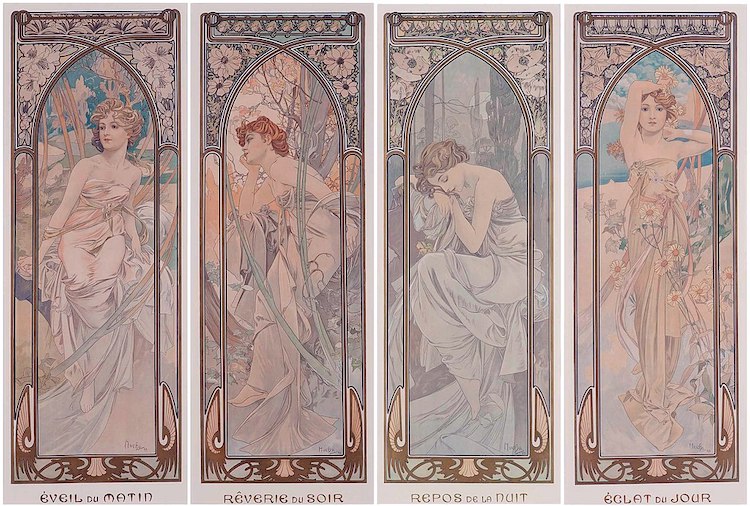 “The Times Of The Day,” 1899 (Photo: WikimediaCommons, Public Domain)

In The Times Of The Day series, Mucha combines fresh, delicate colors with floral motifs. As the title suggests, each female figure represents a time of day: Morning Awakening, Brightness of Day, Evening Contemplation, and Night’s Rest. Each figure is posed and set within natural surroundings that reflect the mood. The scenes are housed within an elaborate ornamental frame, reminiscent of a Gothic window. 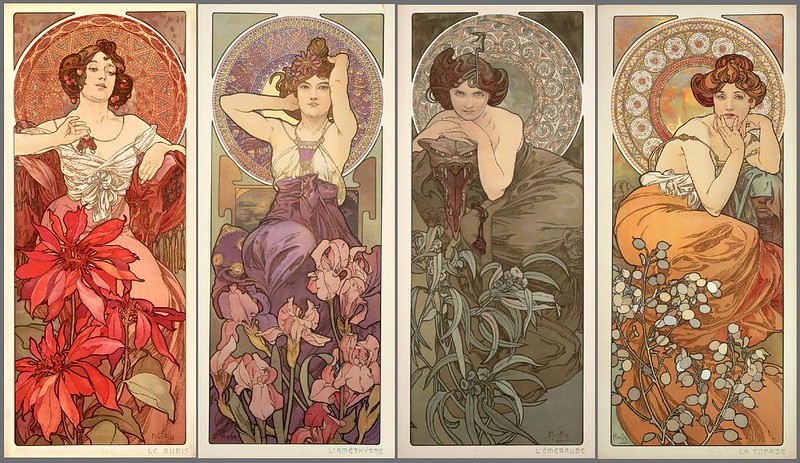 In The Precious Stones, Mucha personifies four gemstones as beautiful women. Each female figure is illustrated wearing flowing robes and hair decorations that recall the color of the stone. Even their eyes match the hue of the gemstone they represent. Mucha has also paired each figure with a specific flower.

The Amethyst figure is colored in purple, red, and pink while paired with irises. Emerald is portrayed as a mysterious precious stone with dragon, gargoyle, and snake motifs featured in the scene. She, of course, wears green and is illustrated among lily grass. Ruby holds a provocative pose, playfully touching her ornate ruby necklace. She is paired with poinsettia flowers. Topaz sits with a dreamy expression, wearing a long golden robe and surrounded by a flowering plant called Lunaria annua.

Alphonse Mucha – The Moon and the Stars (1902) from r/museum

The Moon and the Stars was Mucha’s last series of decorative panels. Three different stars and the Moon are represented as female figures. The Evening Star, The Pole Star, and The Morning Star figures float within space and radiate with swirling starlight. The figure of the Moon covers her mouth with her hand as though she is expressing surprise. The Moon appears as a halo, framing and highlighting her face.