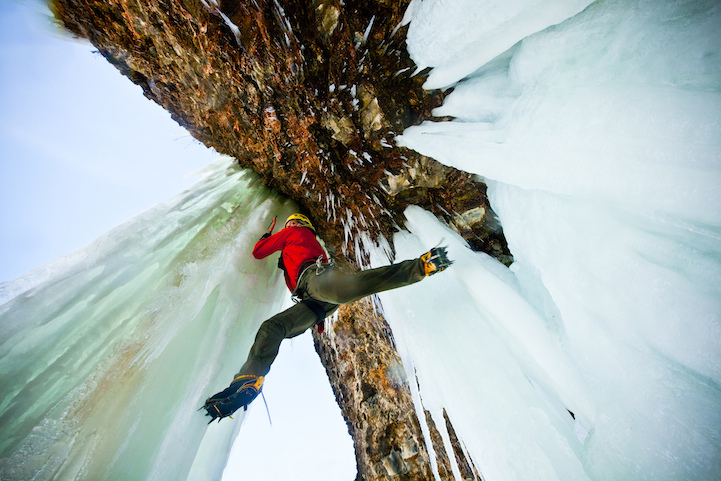 After seeing the above photo on National Geographic's website under Extreme Photo of the Week, we knew we had to get in touch with the photographer to find out more. In that shot, climber Craig Pope is seen crossing an ice cave to a free-standing 82-foot-tall icicle without ropes or protection. Talk about extreme.

On capturing that moment, photographer Ben Herndon told National Geographic, “For this shot the real challenge was the constant dripping water from the icicles on the cave ceiling above. And there was the small possibility of Craig skewering me with his crampons. I decided to move directly underneath Craig. The trick was to time the shot when he was looking down to find feet placement, so you end up with this sprawling profile on top of the intense eyes.”

A few years ago, Herndon decided to start shooting rock climbing with his friend Craig Pope, another Moscow, Idaho local, when we came upon this sport called ice climbing. “He had started killing it on ice and it seemed like a beautiful and dynamic form of climbing,” Herndon explains. “He dragged me along to Banks Lake in central Washington state during a balmy 5 degree day. It was actually kind of a traumatic first time experience. I was fumbling with all of my photo and climbing gear as I approached our first ice route when a limo-sized ice formation detached on a climb above us. We couldn't see it fall so all I heard was this enormous crash and then two-hundred pound ice blocks came rapidly pachinko-ing down the hillside at me.

“Craig, who stood safely behind a cliff ahead of me said calmly, ‘You might want to run.' And I did. I was very much concerned for my safety. I actually dropped all of my camera gear and sprinted for a tree nearby stand. That's the photographer's equivalent of hucking your new born in front of an oncoming bus. I felt bad about it afterward. Needless to say, I was a little nervous about climbing that day. But events like that are pretty rare and actually haven't happened to me since.”

As dangerous as ice climbing sounds, Herndon believes it's really only as dangerous as you make it. “If you read the ice well and avoid sketchy conditions such as rapidly melting ice or detached or fractured columns than you risk is much lower,” he tells us. “As you build up the technique and knowledge, that goes along with repeat experience, you can jump on more technical routes with a higher margin of safety. It's not to say that steep ice is a walk in grandma's potato garden, because it's not. But like any pursuit you get more confidant with time. And honestly, what other sport do you get to use such awesome toys? You have spikes on you feet and in you hands. Plus the feeling of getting a good stick into the ice with your tools is magic.”

Herndon was kind enough to share some of his most thrilling ice climbing photos with us for all of us to enjoy. 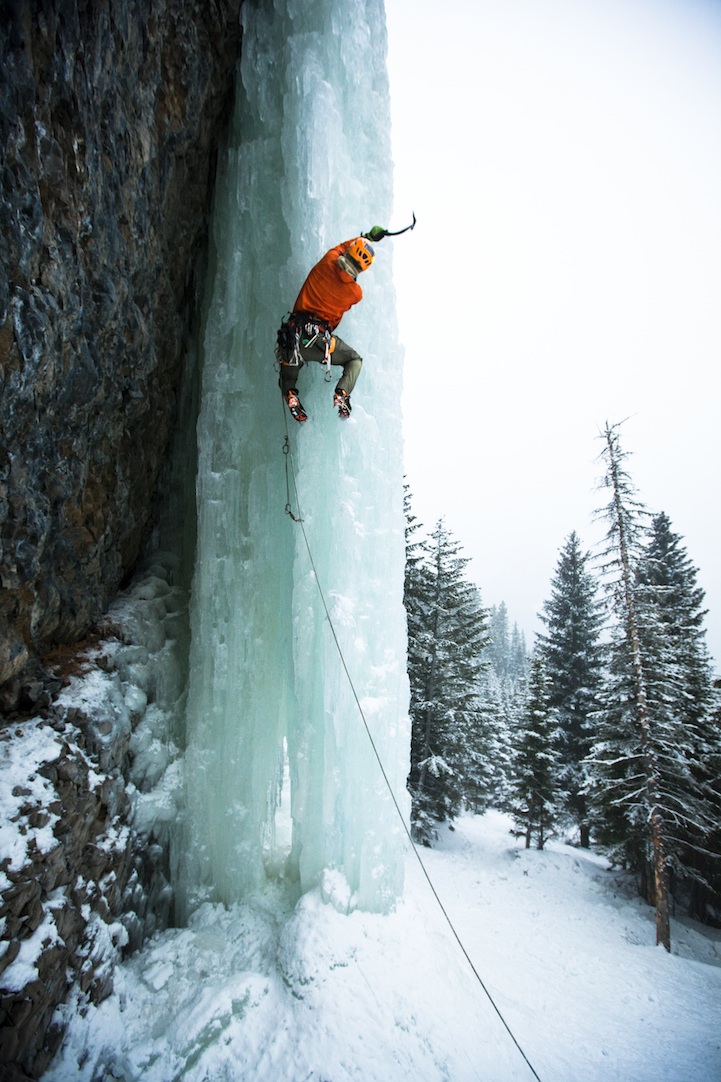 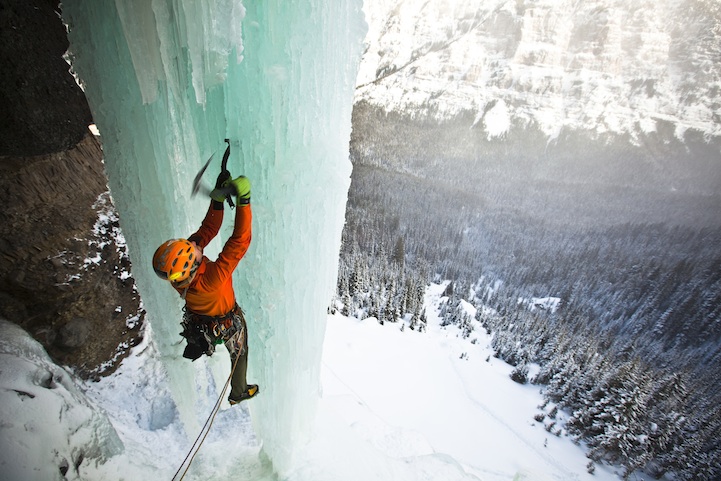 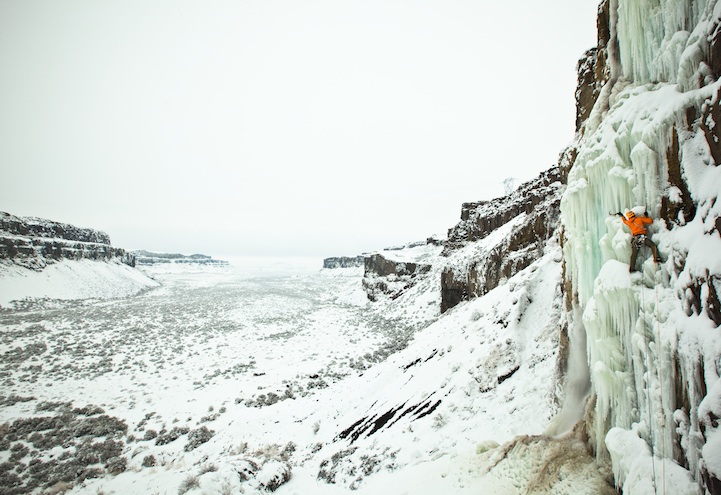 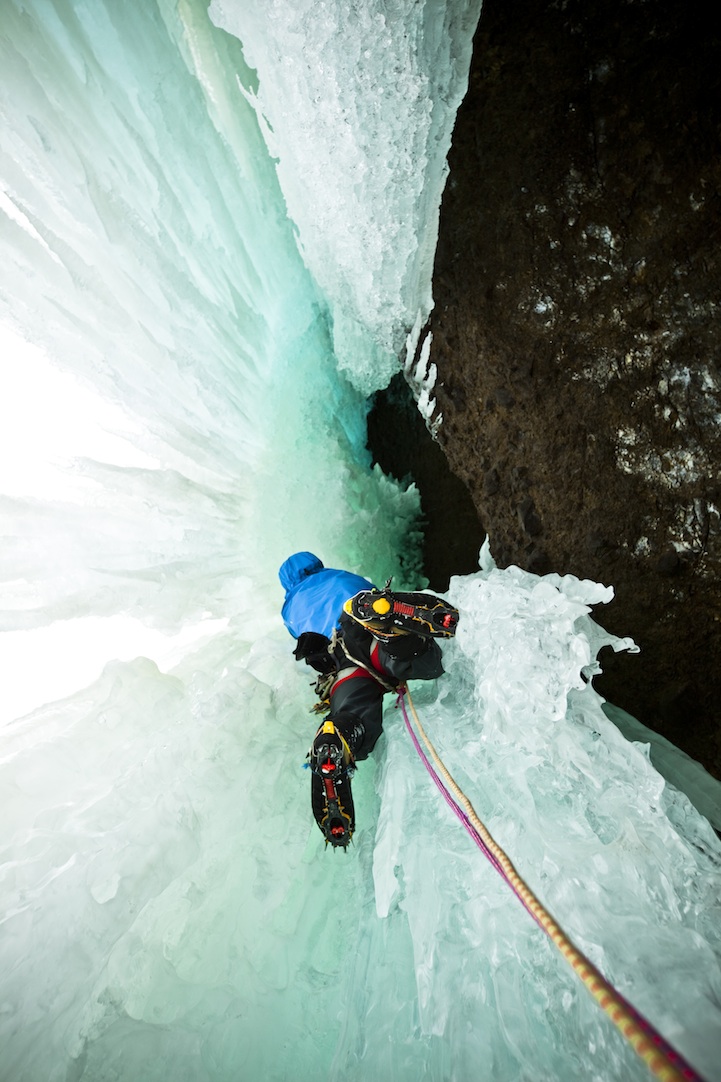 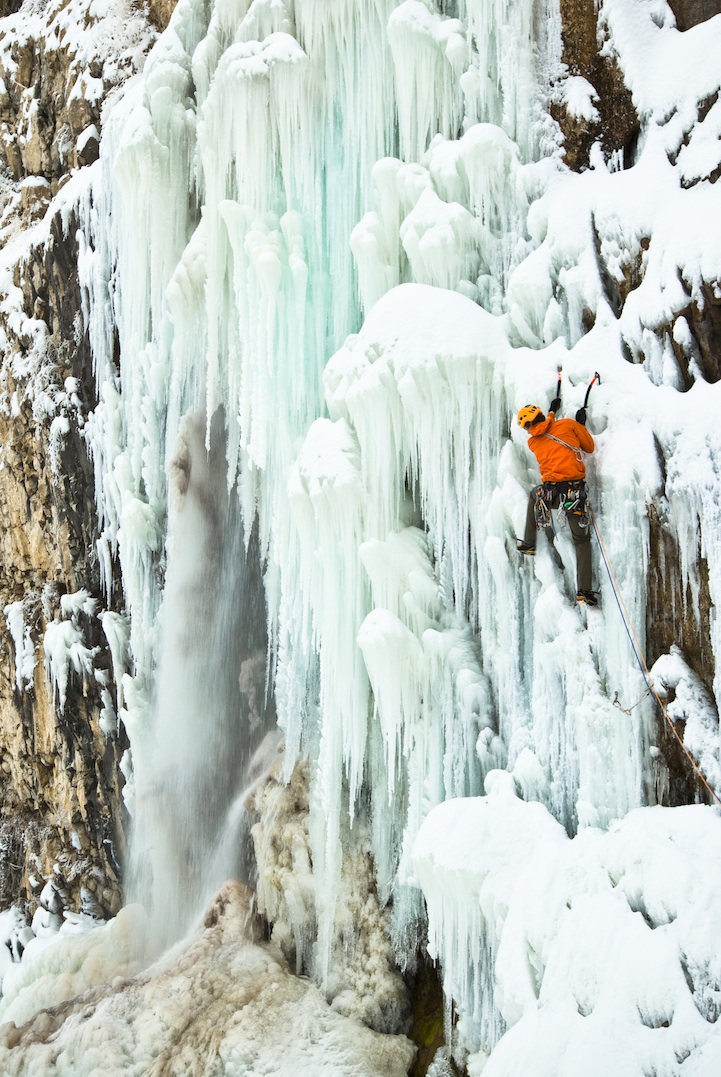 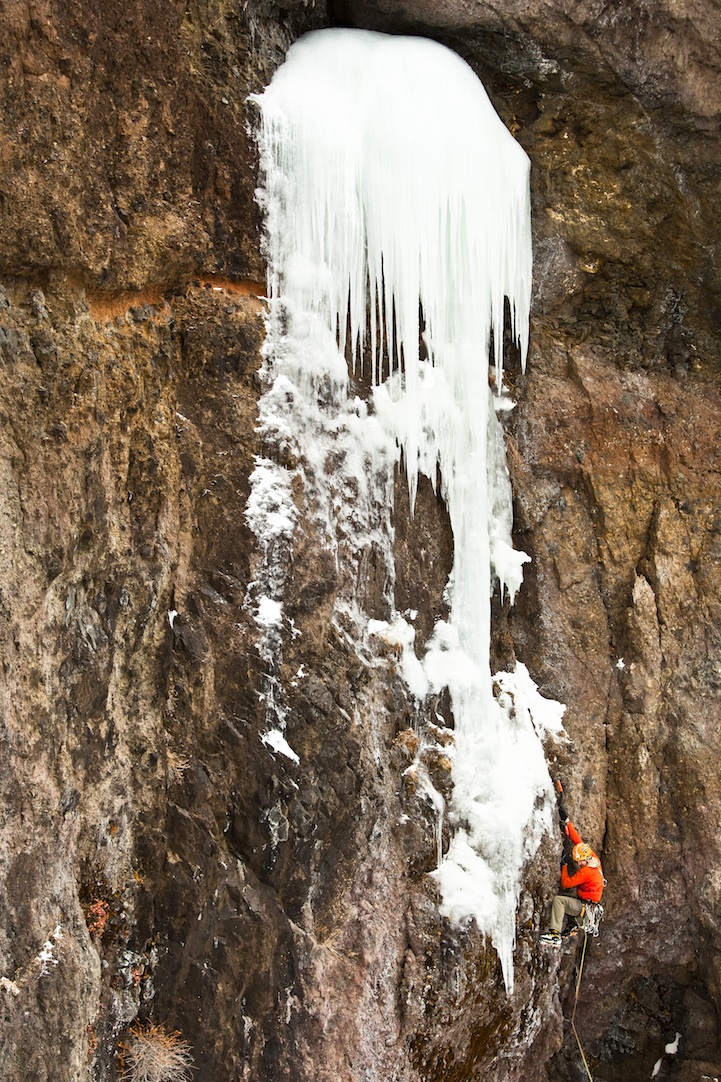 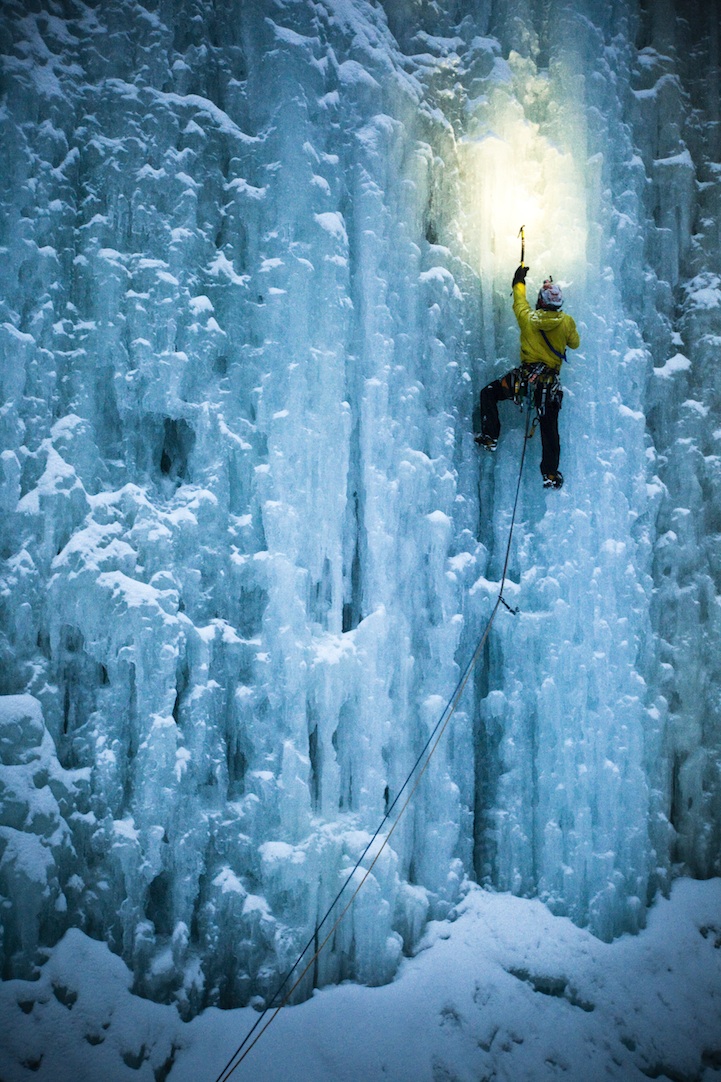 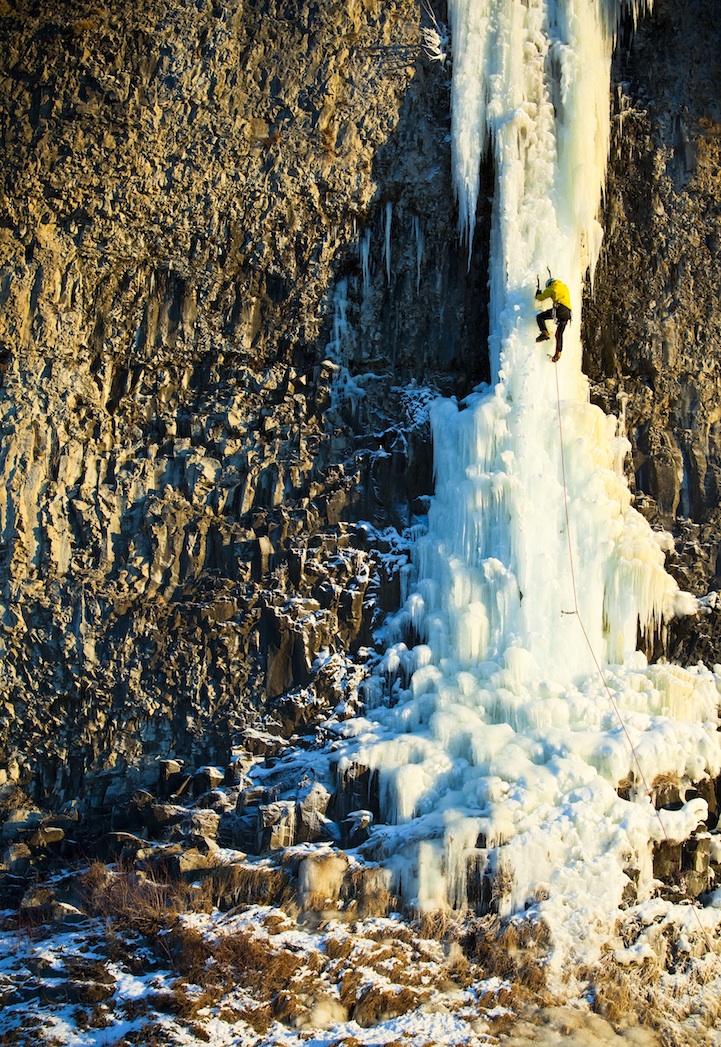 So what are some tips he could give to others if they wanted to take up this kind of photography?

“Invest in a huge down coat,” he says. “Also, get the Costco pack of Little Hotties because those tiny bags of portable warmth are gold when it's -22 degrees in Hyalite Canyon. As far as getting shots, you have to be incredibly patient and willing to make some hard approaches sometimes. It's often miserable, which makes it much more rewarding. It's also one of the most aesthetic photography subjects that I've ever seen. You find these stunning ice formations and landscapes, add the human aspect into it, and all of the sudden you have this powerful visual metaphor about the relationship between people and nature. But seriously, buy a good coat.”