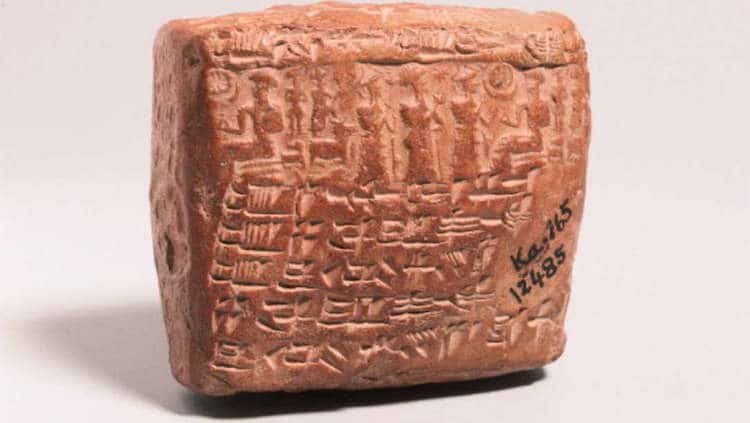 Archaeologists in Turkey recently made an interesting discovery when examining a 4,000-year-old Assyrian tablet. The cuneiform engravings seem to indicate that it's is a sort of ancient prenuptial agreement, detailing everything from divorce to fertility issues.

Unearthed at the Kültepe-Kanesh UNESCO World Heritage site in Turkey’s central Kayseri province, this prenuptial agreement gives incredible insight into marriage in Assyrian culture. The area was a settlement during the Old Assyrian Empire dating between 2100 BC and 1800 BC and over 1,000 cuneiform tablets were discovered in 1925. This particular tablet is on display at the  Istanbul Archaeology Museum and is the earliest known mention of human infertility.

Professor Ahmet Berkız Turp from Harran University's Gynecology and Obstetrics Department shares that, according to the tablet, the wife should allow her husband to hire a hierodule—a female slave acting as a surogate—should the couple not conceive within two years of marriage.

“The female slave would be freed after giving birth to the first male baby and ensuring that the family is not be left without a child,” explains Berkız. As divorce was not an option for infertile couples in Assyrian culture, and monogamy was valued, this clause gave a way to continue in the marriage and grow families who struggled to conceive.

But that's not all. If grounds for divorce were met, the tablet laid out the terms of payment for both spouses. According to the study recently published by researchers in the medical journal of Gynecological Endocrinology, the inscription reads: “Should Laqipum choose to divorce her, he must pay [her] five minas of silver—and should Hatala choose to divorce him, she must pay (him) five minas of silver. Witnesses: Masa, Ashurishtikal, Talia, Shupianika.”

It just goes to show that this complex Mesopotamian society struggled, and resolved, marital conflict in a way that's not so different from today.

What an interesting discovery. Share
Like My Modern Met on Facebook
Get Our Weekly Newsletter
Become a
My Modern Met Member
As a member, you'll join us in our effort to support the arts.
Become a Member
Explore member benefits

What an interesting discovery.