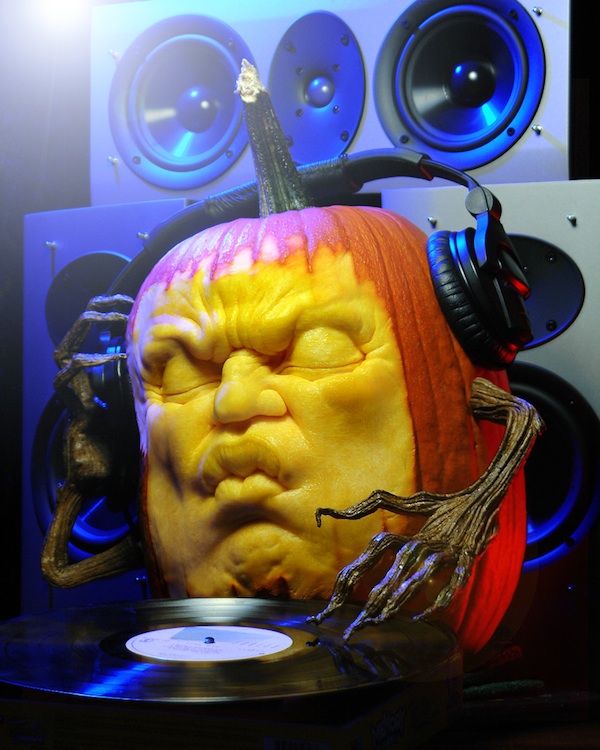 Artist Andy Bergholtz has worked for over 14 years in the toy and collectible industry, sculpting sci-fi and comic book character for clients such as Marvel Comics, Disney, Warner Bros and Lucasfilm. “You know all those cool statues and toys from Star Wars and Marvel Comics that you see in stores?” he says. “Every one of those pieces started out as a clay sculpture, and that's where I come in.”

Last year, Bergholtz tried sculpting a different kind of medium…pumpkins. Like his friend and now partner Ray Villafane, Bergholtz knew that his artistic skills could be put to good use during a particular time of year, Halloween. That's why last year, for the very first time, he started carving pumpkins right alongside Villafane.

Fast forward one year later and now look at what Bergholtz has created for the front cover of Pacific San Diego magazine's October issue. He just sent us these photos that show how he transformed an ordinary pumpkin into one of the coolest pumpkin sculptures we've ever seen. Called DJ Pump, he's a record spinning, music grooving sensation.

“The DJ pumpkin took only a couple of hours to carve,” he tells us, “but the entire process of creating the image took much longer. Designing the concept and staging the final photograph took longer than the actual carving in this case, it was a very fun project to work on.” 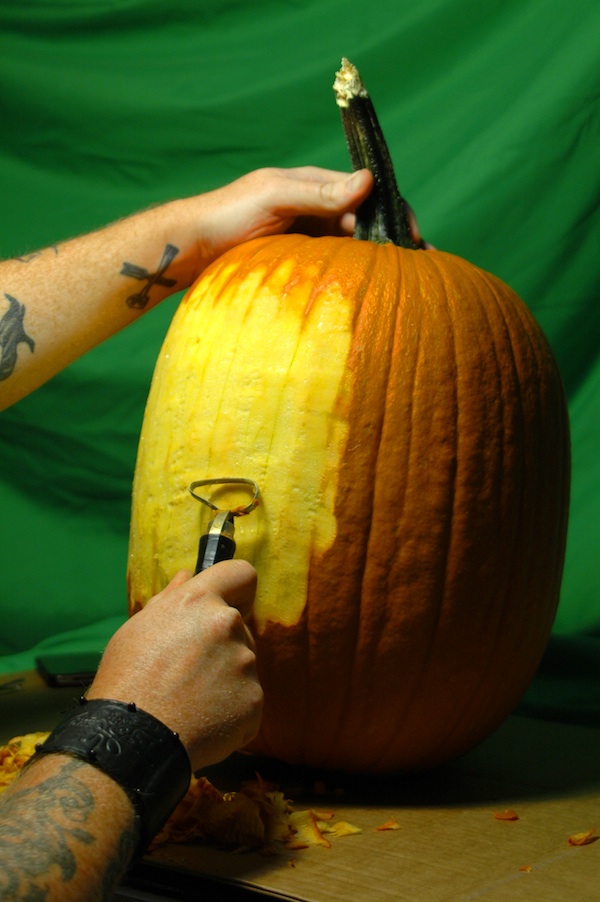 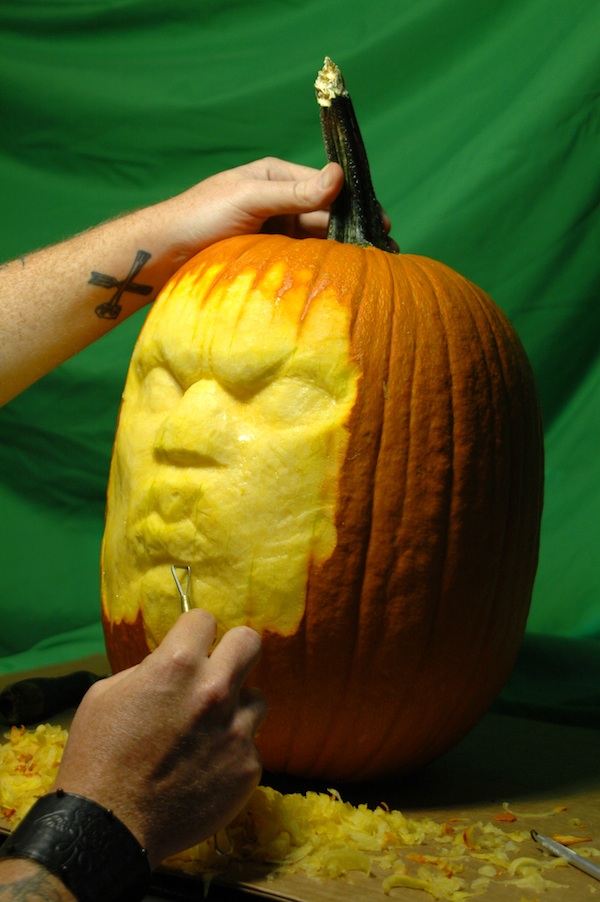 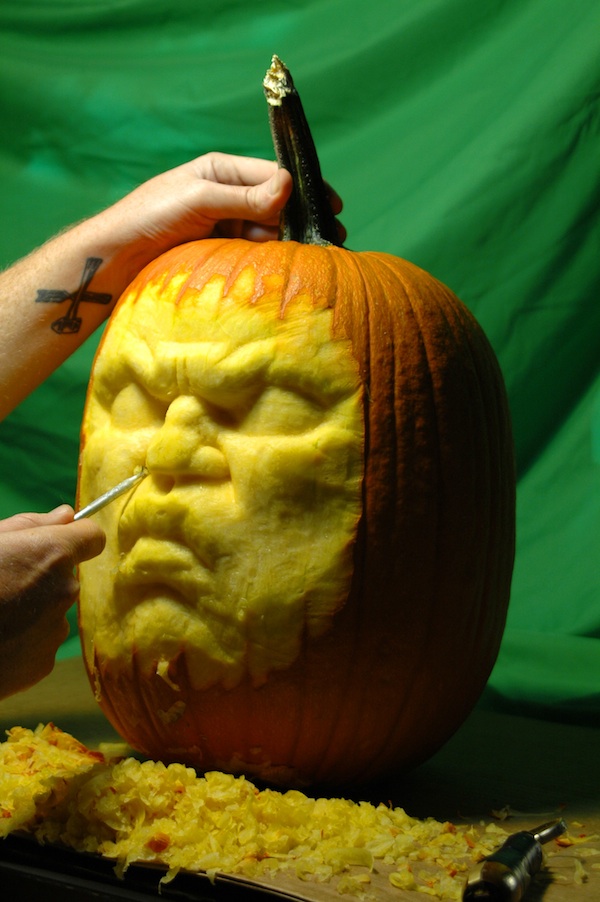 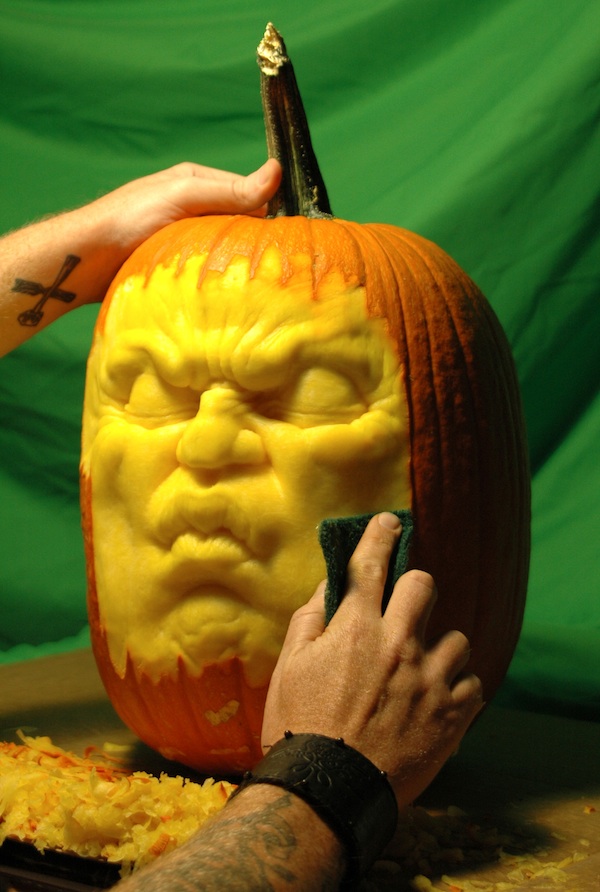 What are some tips he could give to others looking to carve their own creative pumpkins this year? “If planning to carve in ‘3D' like this DJ pumpkin (as opposed to a standard jack-o-lantern), it's extremely helpful to choose a pumpkin with very thick skin or walls,” he says. “To do this, try picking up several pumpkins that are similar in size. If one of them feels heavier than the others, chances are it has a nice thick pulp and will give you a lot of depth to work with in your carving. Also, use plenty of references! I have a hard time making things up as I go, so it helps me a great deal to have a sketch or photo of the design I want to carve ahead of time. Lastly, don't be timid! Stay loose and don't be afraid to really push the depth of your carving.”

Finally, what does Bergholtz have next up his sleeve? “My partner Ray Villafane and I have some amazing carving events planned this season,” he tells us. “We will be carving life-size zombie pumpkins for the New York Botanical Gardens on the 20th and 21st, an event that will be kicked off by carving for a day inside Grand Central Station. We will be working with the largest pumpkin ever grown in human history, over 2,009 lbs! It's a world record, and sure to make for an impressive display. Also, you can tune into Food Network each Sunday night this month to see me compete on Halloween Wars for a $50,000 grand prize.”