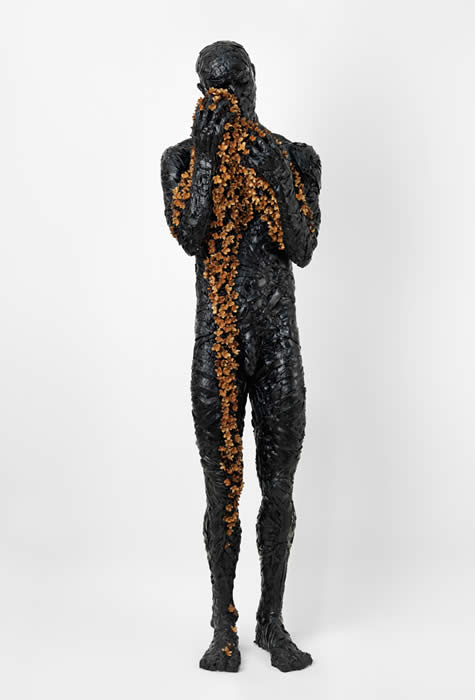 After we discovered Taste the Rain, the gorgeous bark sculpture by UK-artist Anna Gillespie, we knew we had to follow up with another post to show her full body of work. Taste the Rain is part of an ongoing environmental series where Gillespie takes material fallen from trees, like acorns, leaves and bark, and creates powerful sculptures of the human form and its complicated relationship with nature. (She also works with bronze and found steel.) Her years of hard work are culminating in a new show at Beaux Arts gallery in Bath which takes place from October 15 to November 10.

Here's what the gallery says: “The fulcrum in all Gillespie's work is the human figure, with its unfailing ability to spark recognition and empathy in the viewer and therefore elicit an emotional, gut response to the work. Anna Gillespie's willingness to explore the liminal and tangential ends of her craft is perhaps typical of a character who has been bold enough to change tack so dramatically (and so fruitfully) in her career. Natural materials come into her studio and man-made works, imbued with her customary gusto, innovation and meticulousness, leave. It is a balance she has evidently struck with some aplomb with this wonderfully accomplished body of work.”

We were lucky enough to get in touch with Anna who sent us this preview along with some explanations of certain pieces you can expect to find at the show. 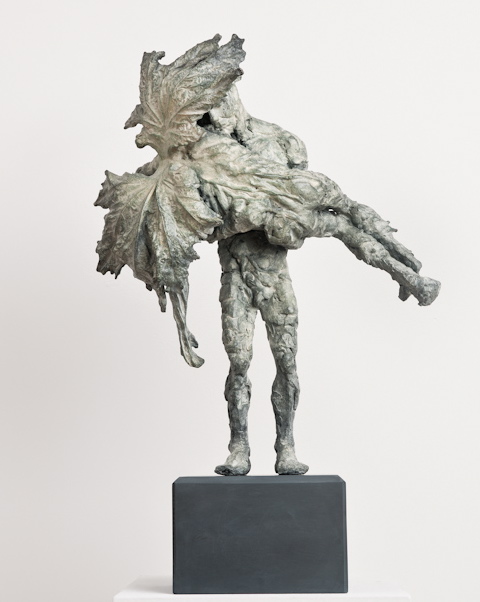 “This piece is called Rescue Me. One of the figures has wings which are made from real leaves which have then been cast into bronze. I made this last autumn along with two other figures that emerged quickly and without planning in the studio. Some work comes like this, other work is much more planned.” 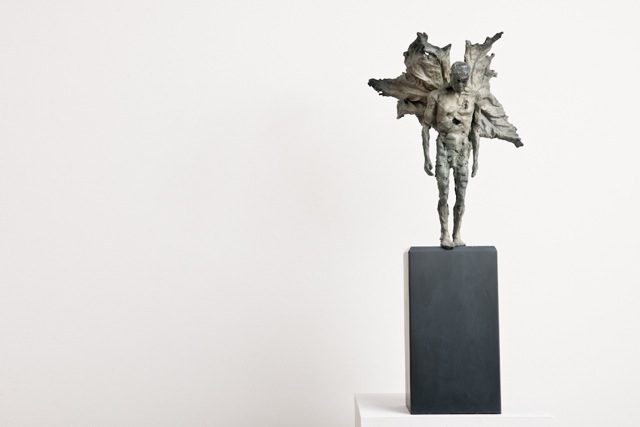 “Again, made in wax and found leaves before being cast into bronze. The man and his title, Ghost of Summer, came to me in a dream. When this happens I feel I must make the piece, otherwise it would be some kind of bad luck. Sounds a bit mad, but somehow as if, if one turned down such a gift from the unconscious (or wherever it comes from) one might not be so lucky to be given that gift again.” 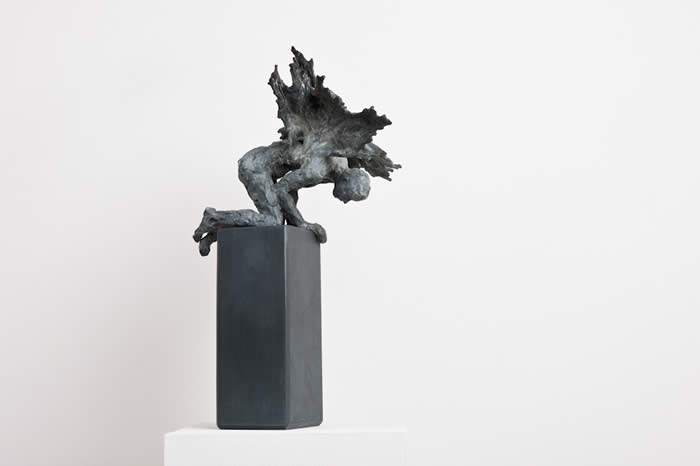 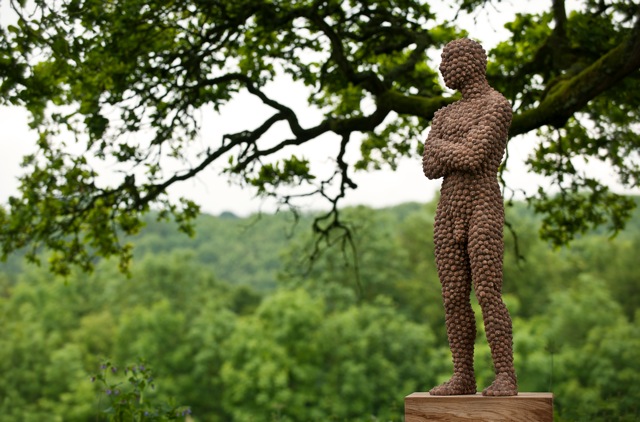 “This is a key piece in the show. He's called Woodsman and stands just over a meter tall. All the acorn cups used in his construction are from one individual tree. I have now cast this piece into bronze. The natural sculptures are special in that they are unique and the beauty of the material is raw, but the bronze editions have their own strength. On a practical level, the bronze work can be sited outside of course – in a way returned to the outdoors.” 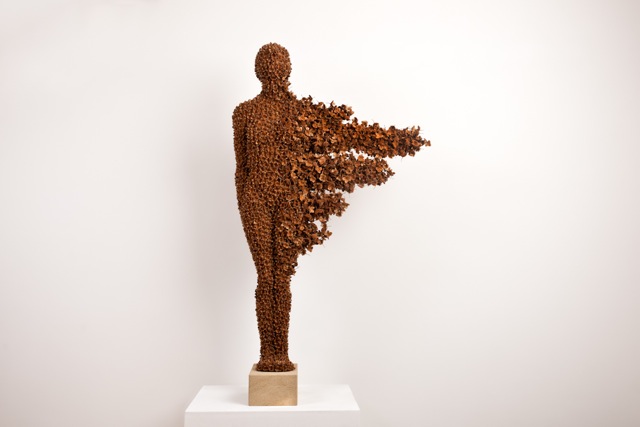 “This piece is called Abundance. Again it is about one meter tall. It's made of beech nut casings – again all from one specific tree. In fact, I now have one favorite tree which I collect beechnuts from exclusively. I have often been under this tree in the autumn when the wind has blown and the sheer quantity of falling beech nuts has made it sound like rain. This piece tries to express my awe at the beauty of nature's abundance.” 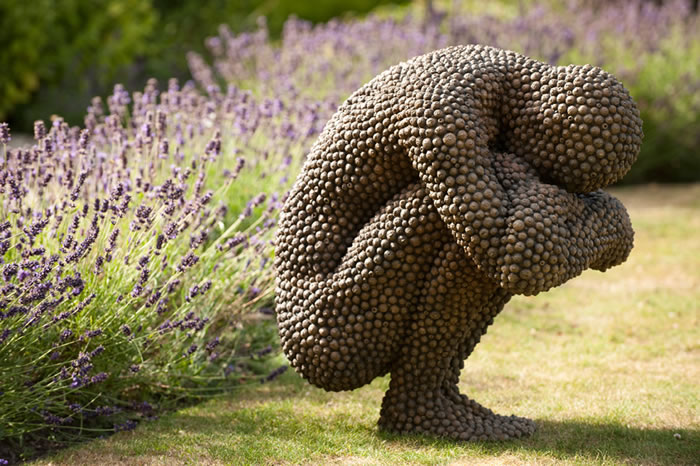 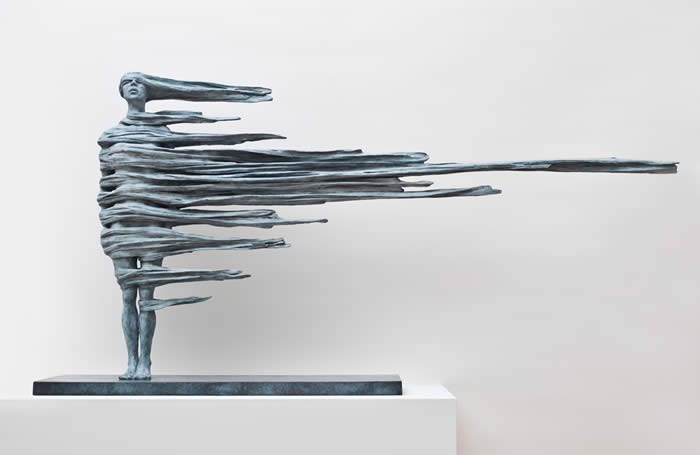 “This is part of a series of work which I describe as my ‘blown' work. I seem to make about one a year, running in parallel with whatever else I'm doing. It's obviously a slow burn. The most obvious interpretation is that these figures are being blown in the wind. And I'm quite happy for people to view them like that. However, really I think they are more about being ‘blown away' on a psychological level. I think they are trying to physically represent something which can only half be seen in the physical world, and that is the point. To the outside world we can seem calm, strong, and upright. But sometimes, underneath that, one is only just hanging on. In this particular piece, which is the last one I have made, the feeling is of being taken to one's limit. I was also interested in exploring taking the technique and materials to their limit in the making of it.” 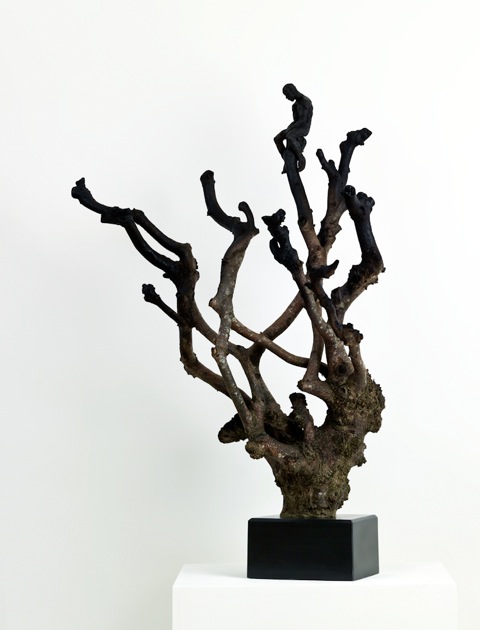 “A gift – this one from a local tree surgeon I know who sometimes just leaves me gifts outside the studio. It's called Perch. Again, unique bronze.” 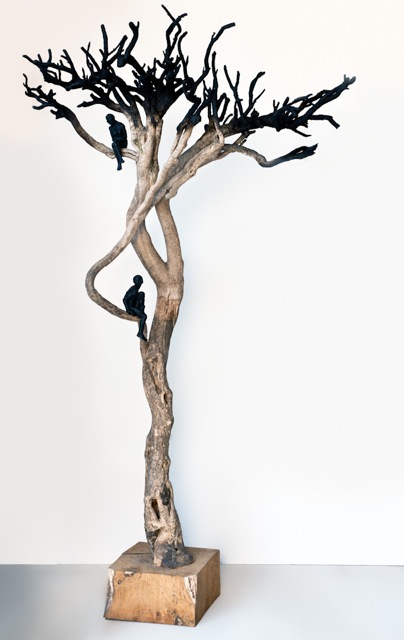 “This last one was another gift by another neighbor. An entire small tree. Needless to say I've transformed it considerably – minimizing it in a way. It's called Tree of Life and there are two unique bronze figures perched in its branches, one male and one female. There are several layers going on here. The man and woman are separated from each other by distance and yet acutely aware of each other. There has been a desecration of nature. the burning and starkness. The title pulls in a reference to our expulsion from Eden – from the bliss of relationship, from the bliss of harmony with nature.” 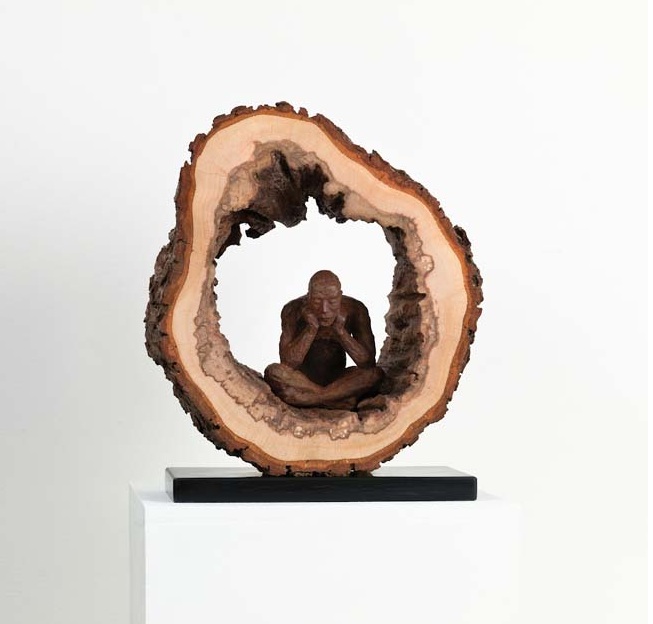 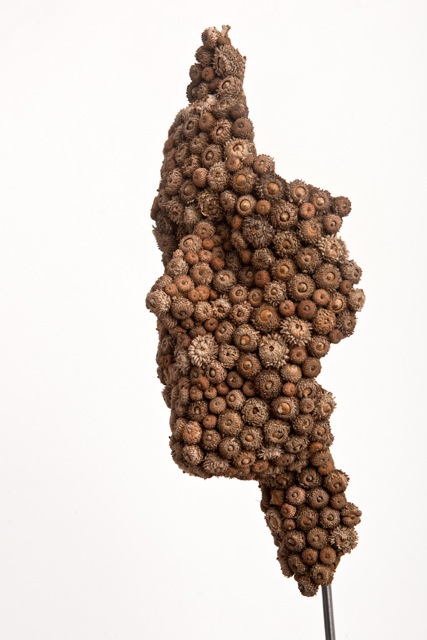