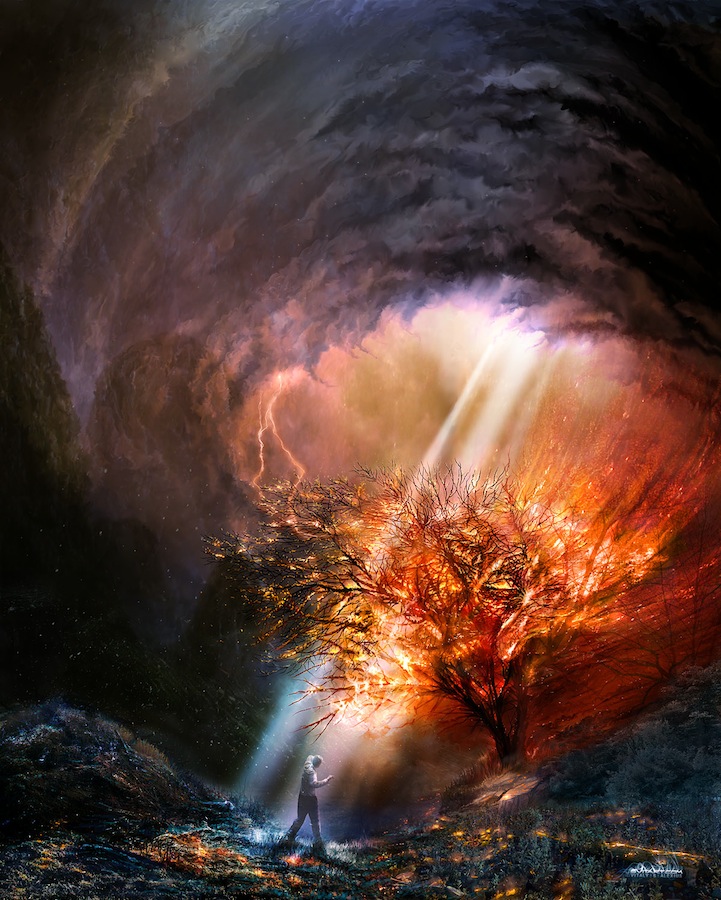 It's not often that I'm moved by digital art, but it's impossible not to be impressed with the portfolio of Russian artist Vitaly Alexius. Perhaps it's the way Vitsly creates such exquisitely detailed apocalyptic worlds… One common theme that is found in many of his works is a brightly lit character that stands alone in the midst of all the chaos. Do these characters represent life or hope? The Toronto-based artist leaves that for viewers to decide… As a big fan of Vitaly's work, I reached out to him and was honored that he answered some of my questions: 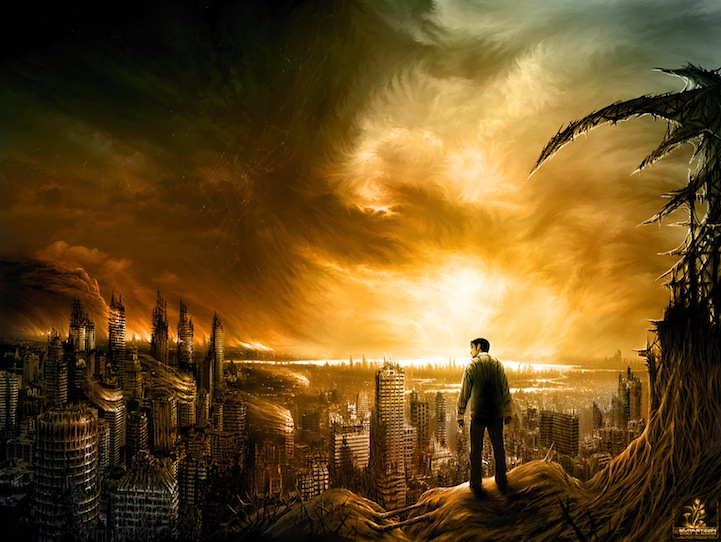 Where are you from? Can you please give us a brief description of yourself? I was born in the year 1984, in the industrial city of Novokuznetsk, located on the Tom River in south central Siberian Russia. For the first four years of my life, I lived amidst coal mining and aluminum/steel production factories; in a city of European architecture covered with columns and arches, surrounded by Russian Taiga. Since I was four years old, I have been drawing tiny starships and celestial life fascinated me. At four, I moved to the city of Novosibirsk, the capital of Siberia, with my parents. There, in a remote, forest covered, ‘science community' district of Akademgorodok, at 11 years of age, I studied traditional drawing, watercolor/gauche/oil painting, anatomy, model building, design, art history and illustration at a great high-arts institution for two years, expecting a move to Moscow to further my studies. On April 11/1997 fate has given me an unexpected twist and by means of aerial transportation I was thrown about 5555 miles across the Atlantic Ocean to Toronto, Canada, where I am currently residing, in my own lovely apartment east of Chinatown. After completing my OAC's at R. H. King Academy, I went on to the Ontario College of Art and Design, where I've finished 2 years of “Environmental Design” program studying: architecture, interior design, AutoCAD rendering, and 3d modeling. I've graduated from OCAD with bachelor of design in Illustration. Since 2000, I've been tutoring on the subject of drawing and painting. In 2002, I've learned that magical program called Photoshop and have been using it ever since, to develop an innovative, digital-art style , which I gave a name – Dreaminism. Currently I'm working as a photographer and an illustrator, painting various: book covers, graphic novels, posters and cd covers. 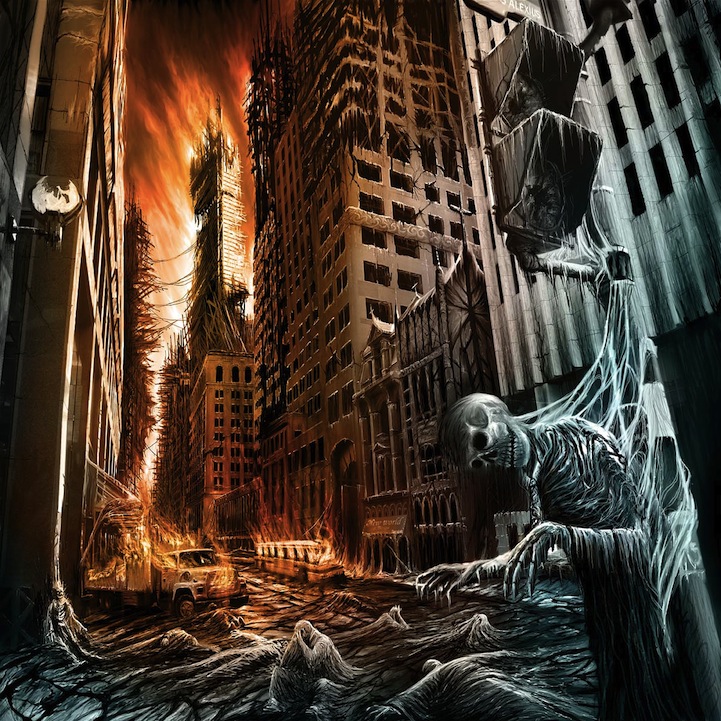 Your images have a dark, apocalyptic feel to them. What inspires you to create these incredible images? Various post-apocalyptic books that I've read when I was younger and the turbulent life I've spent in soviet Union. It's an entirely different world- a world of beauty and life, corruption and decay, charming nature and deadly pollution. In fact, my very first art inspiration came to me in 1995, Novokuznetsk, Siberia… On the gabled cottage roof, covered in wooden planks, moldings, and swirly carvings, I've met a local artist. He was drawing some kind of forest on his canvas, via the view from the rooftop. I admired his glorious skill and pondered what it would be like to become an artist myself. Later on, I was enjoying a nice hike via the good old Trans-Siberian railway of the Soviet Union, while climbing various green mountains, covered with lush vegetation, with my good friends of that time. Upon the climb, we sat on the mountain side, enjoying the mid-day sun, bursting though the clouds, in an explosion of light rays that lived on their own accord, playing with the shadows of the mountains, forests, and fields below. The wind rolled about the fields, creating a magical, wavy sea of orange grasses. And at that moment on I've said to myself: “Every artist has their style. Whatever shall be mine?…” … and while staring at those rays of light I had decided- “I shall become the master of the landscape and the sky. And draw it in a manner of a tasty delicacy that can be consumed in large quantities via the spoon of visual perception- and thus the delectable sky full of light rays that you see in most of my works now, was born.”It took me (counts fingers)… 15 years to master those rays of light. 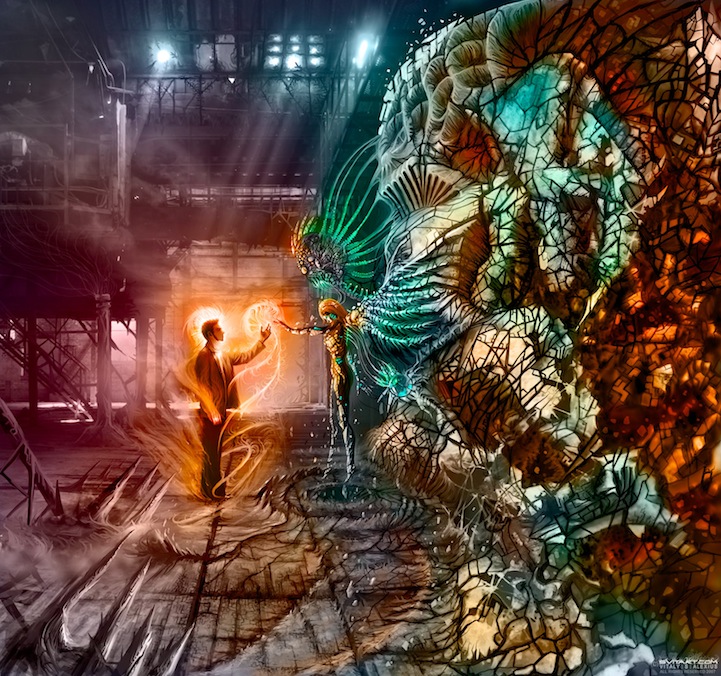 How would you describe the common themes in your work? The theme of my work is “Dreaminism” the sense of shifted reality realized in the split second before the waking. It's full of high contrasts, realistic yet fantasy scenes and romantically apocalyptic scenery- and can easily be recognized from a mile away. 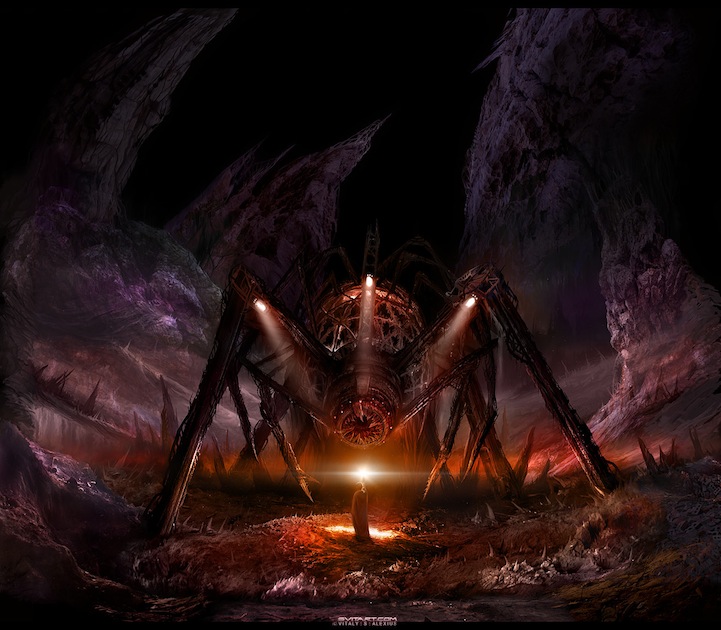 What tools do you use? I use wacom tablet 6×8 and photoshop cs and canon 5D mark II. 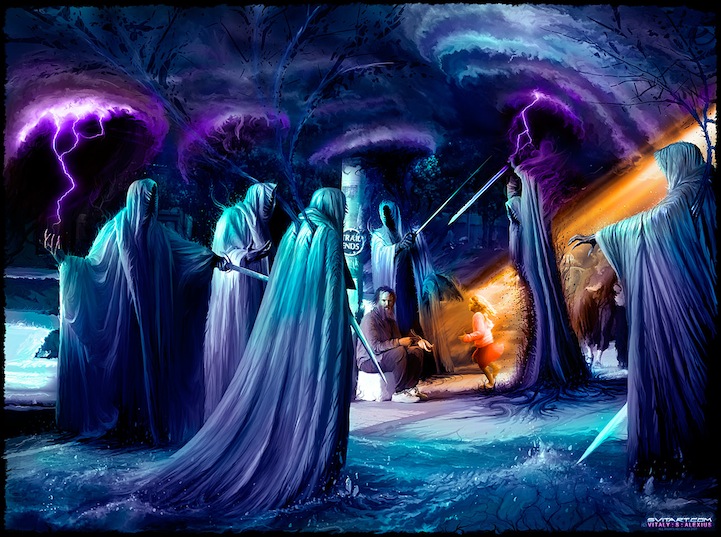 What are some of the most exciting projects you've worked on? My current most existing project is my comic book Romantically Apocalyptic. It is the most exciting of all because it's my own graphic novel which relies heavily on my hobby of “urban exploration” involving exploring abandoned buildings around the world. 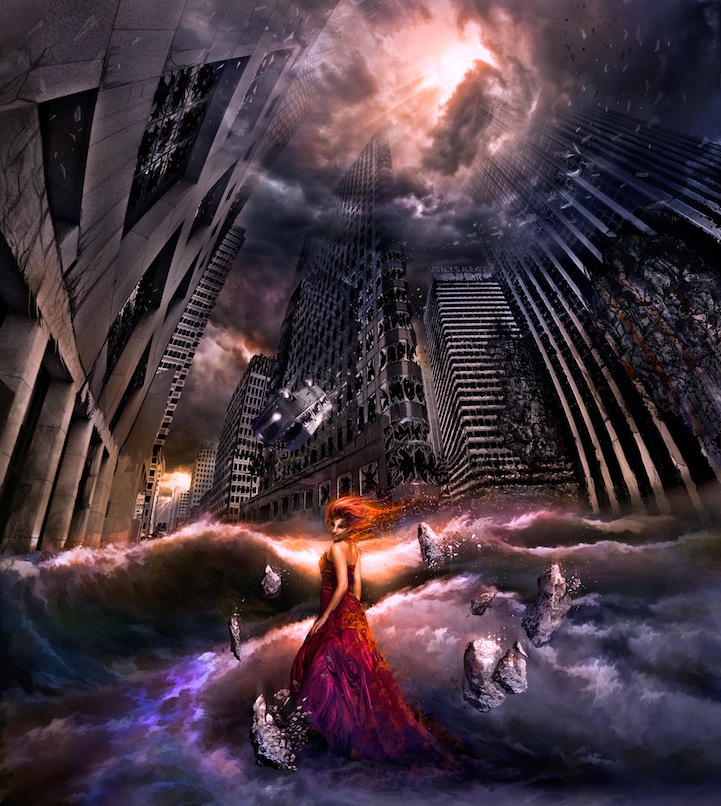 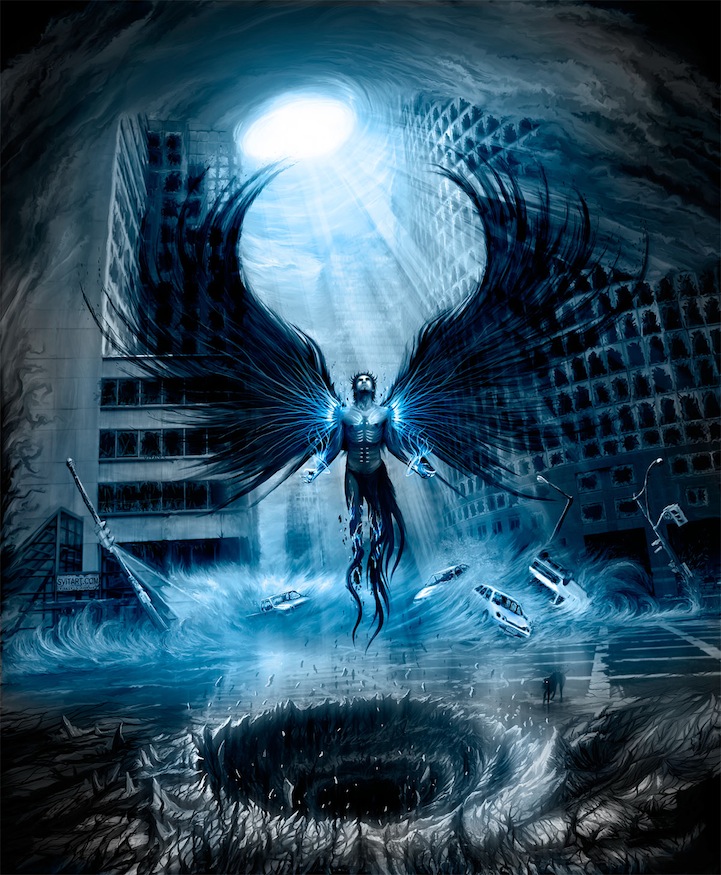 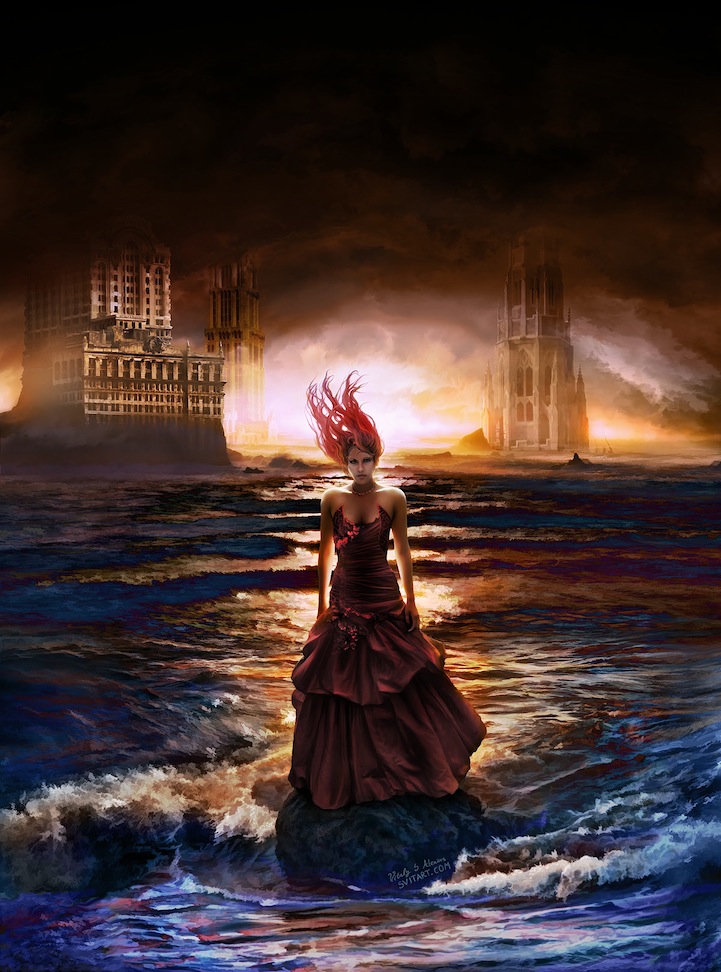 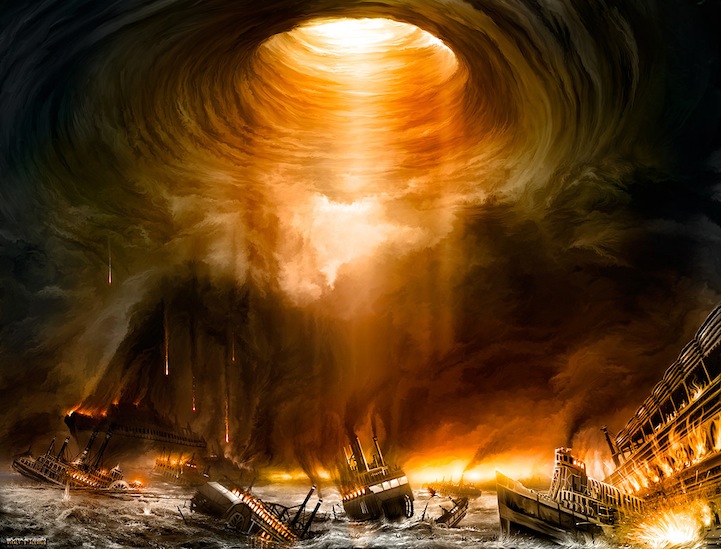 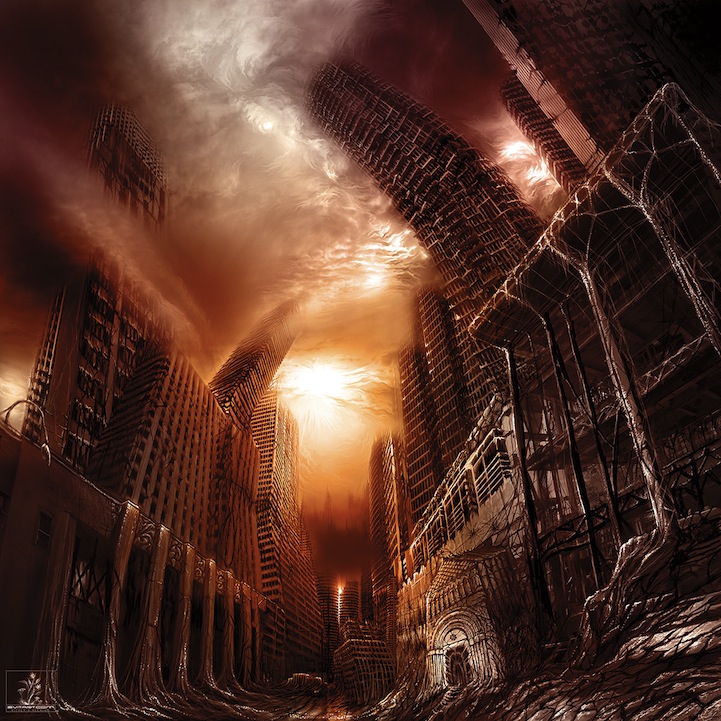 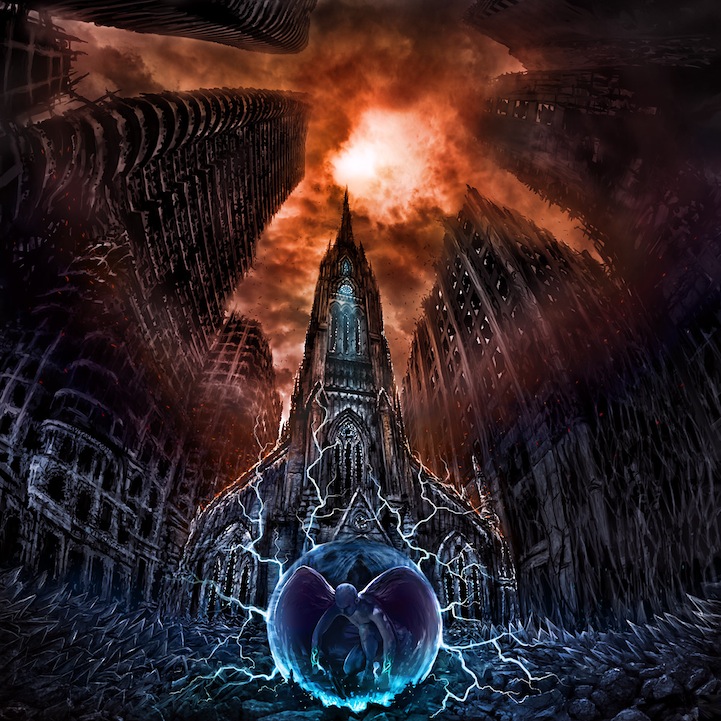 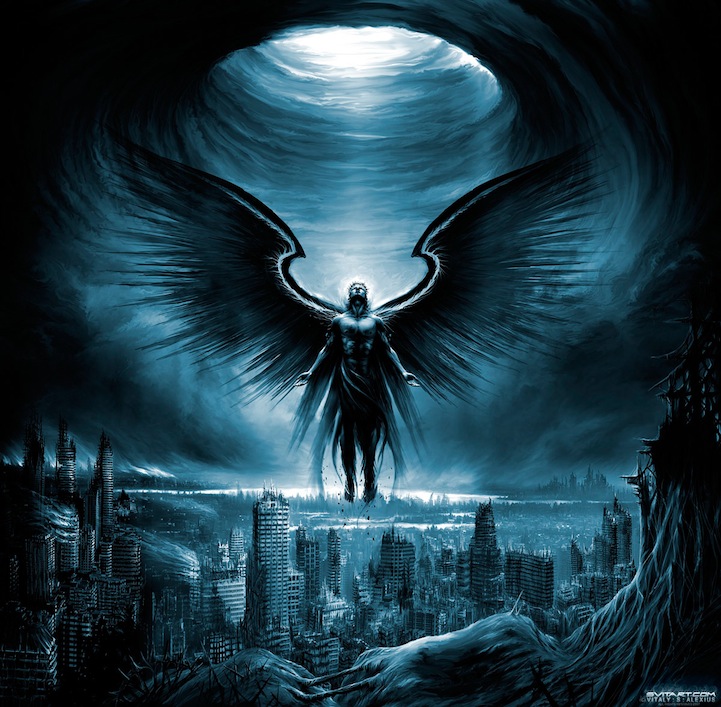 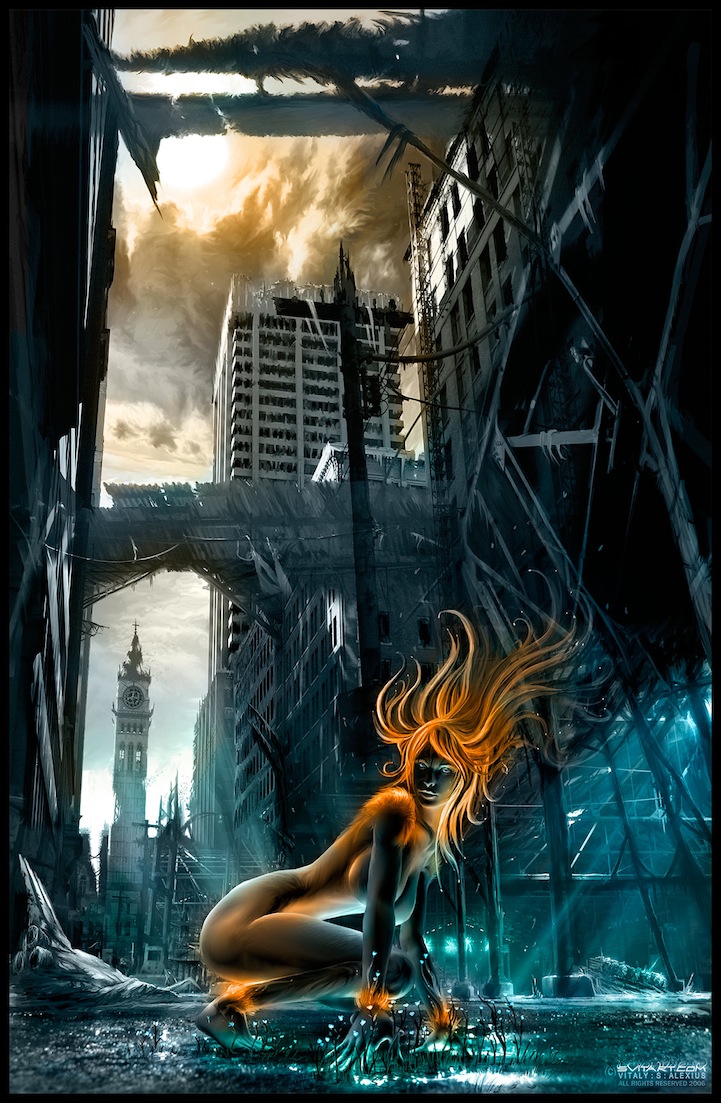