In May 2019, 17 renowned architecture firms launched a declaration of a climate, justice, and biodiversity emergency now known as Construction Declares. The group includes architects, engineers, and more disciplines who all signed a pledge that would define and expand sustainability efforts of future works.

Soon after the original UK Architects Declare, similar groups formed across the globe as others used the Declare name to make an impact on the profession and the world. Michael Pawlyn of Architects Declare explains that sustainable architecture today tends to “just mitigate negatives”—or do less damage than a traditional building—instead of designing to do no damage or create a positive impact.

In an interview, Pawlyn shared, “There's something inherently problematic in the framing of sustainability that implies the best you can aspire to is neutrality, and anything less than that is just part of a degenerative downward cycle. We urgently need to look at means to be regenerative, which is to get into a positive cycle in which everything we do we're trying to have a positive impact – in terms of restoring ecosystems, taking carbon out of the atmosphere, regarding communities and so on.”

Architects Declare is a global initiative started in the UK that asks architects to demand a change for justice.

This belief was summarized into 11 core changes or requirements. The requirements set by UK Architects Declare include:

Declare in Practice and Its Recent Controversy 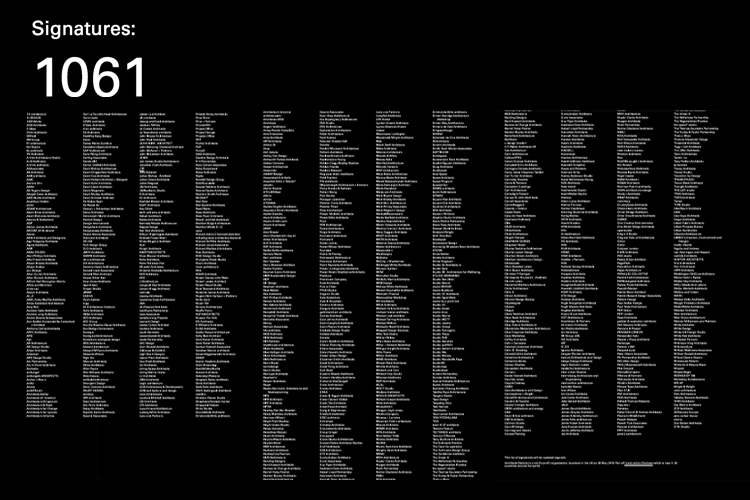 The Declare movement has been replicated all over the world with countries taking ownership of Declare and using it to define their own list of commitments inspired by the one above, host town halls to execute these ideas, and to help local activists push for policy change.

More than 20 countries have actively created their own “declaration” and call for firms to sign the agreement. Still, adding a firm as a signatory does not mean that you are designing buildings as “green” as the statement demands. Two original signatories and renowned architecture firms, Foster + Partners and Zaha Hadid Architects, have recently left the Architects Declare network following claims that they are not meeting the requirements in their latest aviation projects.

Architects Declare did not actively rebuke the firms, explaining that they “have a principle of not naming and shaming out colleagues in the industry.” Though the group did not directly “name names,” they did publicly state that Declare was being “undermined by a few practices who are not supporting the efforts of the initiative,” and expressed future plans to conduct a survey and make tighter restrictions to the pledge. Declare also aired concerns that some companies may be using the Architects Declare platform as a PR program, seeking recognition for the agreement but not adjusting their practices to meet the demands.

Still, while many agree that Declare stands for an important shift in architecture and other professions in the construction industry, some companies disagree with the potential new restrictions and how Declare has otherwise been using its platform. Declare believes that no matter what sustainability measures are implemented, an airport in the desert is simply not the minimally invasive project that architects should be investing in. However, many other architects feel this is an unfair ask. Why should designers dictate this large-scale change? Why should firms have to turn away an important commission when policy is not limiting the project's environmental impact?

Zaha Hadid Architects left the group for these exact reasons after receiving criticism for their Western Sydney International Airport. “We saw Architects Declare as a broad church to raise consciousness on the issues; enabling architectural practices of all sizes to build a coalition for change and help each other find solutions,” explained Zaha Hadid Architects. “We need to be progressive, but we see no advantage in positioning the profession to fail. In fact, it would be a historic mistake.” While this seems reasonable, principal Patrick Schumacher's warning to avoid radical change surely seems antithetical to Declare's mission, and it makes one wonder why the firm signed an agreement that is seeking large-scale change.

Similarly, Foster + Partners left Declare following criticism of their Saudi Arabian airport that would serve a high-end resort. In response to these comments, the firm released a statement saying, “We believe that the hallmark of our age, and the future of our globally connected world, is mobility. Mobility of people, goods and information across boundaries. Only by internationally coordinated action can we confront the issues of global warming and, indeed, future pandemics. Aviation has a vital role to play in this process and will continue to do so. You cannot wind the clock backwards.”

A shift in sustainable architecture will surely be a long and difficult process. After becoming complacent in a building process that at best, “mitigates damage,” change will be easy to talk about but challenging to accomplish. Many may see reason in architects' unwillingness to refuse commissions, yet many others will demand integrity from those who promised to take the climate crisis seriously.

All images and gifs edited from Architects Declare.