Golden Crown of Water Crests Over an Aqua Wave 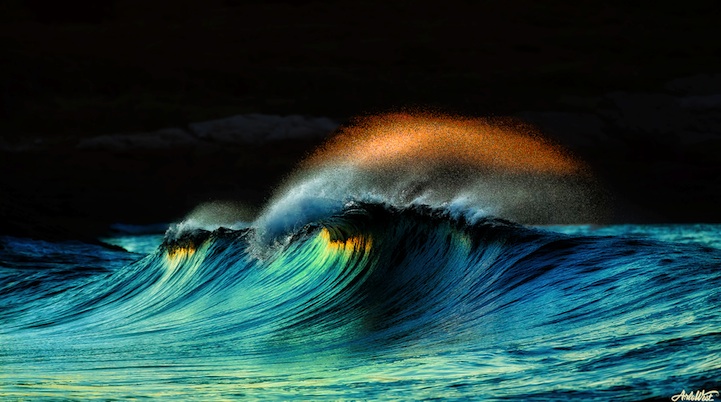 Photographer Arlo West calls it a “once-in-a-lifetime shot.” One very early morning, off the coast of Maine, West took this amazing photo of a wave breaking as a magnificent crown of water sprayed over it. Not only was his sense of timing perfect, the way he highlighted all the different colors made the photo seem less like a picture and more like a painting.

“I vividly remember the morning I shot this image,” West told us when we asked him what the story was behind it. “I was using my Canon EOS-1D Mark IV and a Canon 500mm f/4 lens. I caught this beautiful wave coming in with the morning sun just painting the amber on the spray and reflecting on the curl. The aqua blue water really made a nice contrast and I instinctively hit the shutter and this image was the result. The colors were there to begin with however I simply used Nik plug-ins to enhance them.”

West was kind enough to answer a few more questions about his post processing work and all the positive feedback he received. The photo has not only been favorited over 100 times on Flickr, it was also selected in Flickr Explore. (Explore is Flickr's way of showcasing the most interesting photos within a given time frame.)

The colors are so vibrant, how much post processing work was done?
I mostly use Nik software for my post processing work. In this particular picture, I used Nik Color Efex Pro to enhance the colors. Viveza is another favorite of mine from Nik. I also used Tonal Contrast to bring out the subtle details of the spray at the top of the wave. I really like Tonal Contrast for many reasons but I think the most significant would be its ability to bring details to the front that would normally be lost in the post processing.

I try and make a new layer with every plug-in that I use so that I can blend them together. I always tell people that processing an image is like mixing a song in the studio. It is an expression of your emotion and artistic interpretation. So, not everyone will agree with your methodology, but if it pleases you then do it.

Were you surprised with all the positive feedback you received?
I knew the minute I took that shot it was a keeper. I was shooting the sunrise at a remote location on the coast of Maine with fellow photographer Dan Grenier that day. The shot looked great in the viewfinder, but when I displayed it on the LCD and used my loupe I was like “Oh yeah, Dan you have to see this!” It was exciting as it always is when you catch a moment like that on the camera. I wasn't too surprised that people really liked the shot because it was just one of those once-in-a-lifetime, had-to-be-there-at-the-right-moment captures.

Why do you think so many people connect with it?
I think people love to view images like this because of nature's complex beauty. It surrounds us all everyday and we tend to just accept it. You know the feeling when you say, “I wish I had my camera right now,” that is what this shot was all about. I did have my camera. I caught that moment and was able to share it with people. I think that images like this also speak a universal language that breaks all communication barriers. You could be from Russia, UK or Africa and still understand it. Besides, who doesn't love the coast of Maine?