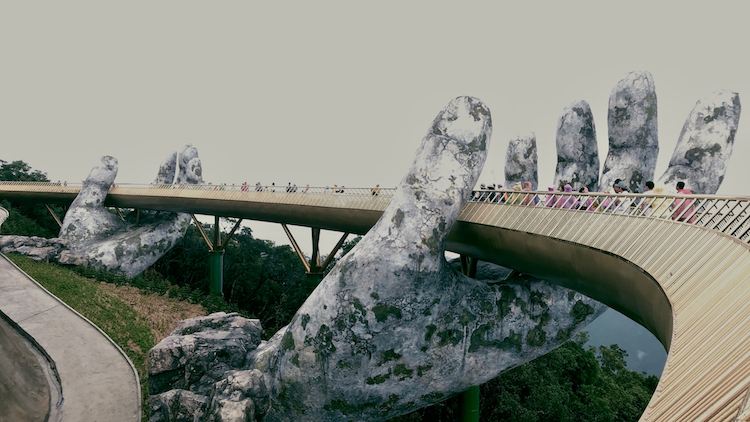 A new bridge in Vietnam is causing quite a stir for its unusual design. Located outside of Danang at the Bà Nà Hills mountain resort, the golden bridge is seemingly suspended in the air by a pair of giant hands that lift it toward the heavens. The nearly 500-foot-long bridge opened in June as part of the continuing development of the Thien Thai Garden within the resort.

The bridge is suspended almost 4,600 feet above sea level and its path is lined with purple Lobelia Chrysanthemums to give a punch of color. Ho Chi Mihn-based TA Corporation appears to be responsible for the landscape concept, though no designer has been attached to the finished piece. Now, the 1.5 million visitors that flock to Bà Nà Hills will be able to take in this new attraction, which adds to their impressive list of sites.

Visitors can already visit the Fantasy Park, which was inspired by 20,000 Leagues Under the Sea and impressive French Gardens. The bridge itself was the recent location of a bridal fashion show and will surely attract selfie-lovers from around the world. The structure is reportedly part of a $2 billion investment to bring more tourists to the area.

An unusual bridge at Bà Nà Hills in Vietnam appears to be held up by a pair of giant hands.

Intrigued by this unusual bridge?