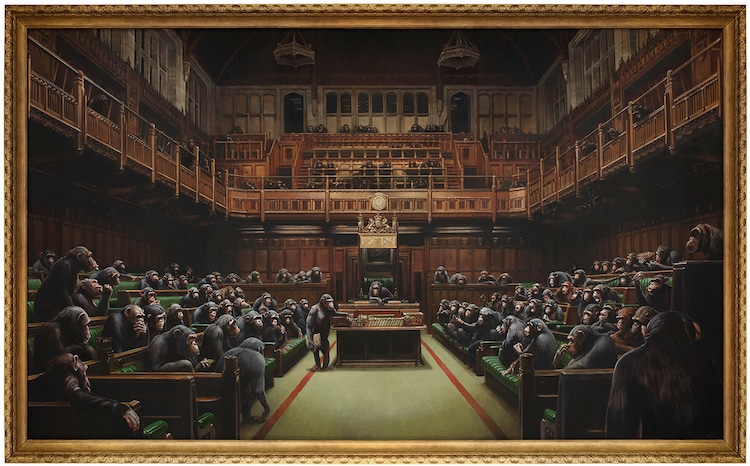 It's a big week for Banksy fans. Not only did the anonymous street artist unexpectedly open his own homewares shop in Croydon, but his largest known canvas is up for sale at Sotheby's. One year after his Girl with a Balloon famously self-destructed after being sold for $1.3 million, Banksy is back up for auction. This time it's his searing political commentary, Devolving Parliament, that is taking center stage.

With Brexit imminent, the work is all too timely. Interestingly, it was painted a decade ago in 2009 and, at the time, had a different title. First known as Question Time, it was part of the artist's groundbreaking exhibition, Banksy versus Bristol Museum, which attracted over 300,000 visitors. In the canvas, Banksy fills the House of Commons with chimpanzees instead of MPs, making it a darkly sarcastic look at British politics. The 13-foot-long piece is Banksy's biggest known artwork and is estimated to bring in £1.5-£2 million ($1.8-$2.46 million).

Interestingly, Banksy has reworked the painting since it was first displayed. Not only did the title change, but he also snuffed out the lamps that were once glowing, and flipped over an upturned banana peel that sits in the foreground. Recently, the work came back into the spotlight when Bristol Museum put it back on display to mark the intended Brexit Day of March 29, 2019. At the time, Banksy mused about the canvas' renewed relevancy. “I made this ten years ago,” he wrote on Instagram. “Bristol museum have just put it back on display to mark Brexit day. ‘Laugh now, but one day no-one will be in charge.' ”

. Devolved Parliament I made this ten years ago. Bristol museum have just put it back on display to mark Brexit day. . “Laugh now, but one day no-one will be in charge.”

His citation references his 2002 painting Laugh Now, which has become one of his most iconic pieces. It was the first time that chimps appeared in his artwork, and in this particular case, they are lined up in a row wearing aprons emblazoned with the quote. Certainly, no one is laughing now. With the continued chaos of Brexit and the overall global political climate tilting right, Devolving Parliament is a premonition of what awaits if we're not careful.

“Banksy is a modern-day Voltaire, confronting the burning issues of the day with caustic wit and biting satire, but with a lightness of touch and a visual irony that distills society’s most complicated political situations into just one, deceptively simple image that is readily shareable in our social media age,” says Alex Branczik, Sotheby’s European Head of Contemporary Art. “Regardless of where you sit in the Brexit debate, there’s no doubt that this work is more pertinent now than it has ever been, capturing unprecedented levels of political chaos and confirming Banksy as the satirical polemicist of our time.”

In the lead-up to Sotheby's Contemporary Art Evening Auction on October 3, Devolved Parliament will be on public view at their London branch on New Bond Street. The auction itself is scheduled to start at 7 pm BST. Those who can't be in London can register to bid in the auction, which also features work by Basquait, Cy Twombly, and Damien Hirst, online.

Update: In the end, Banksy's work blew away everyone's expectations. After a long, 13-minute bidding war, Devolved Parliament was purchased by an anonymous phone bidder for an astonishing $12.1 million. This is a huge leap over his previous auction high of $1.9 million, which his painting Keep It Spotless—a collaboration with Damien Hirst—sold for in 2009.

Banksy's Devolved Parliament is expected to fetch up to $2.5 million when it sells for auction at Sotheby's.

My Modern Met granted permission to feature photo by Sotheby's.

10+ Creative Responses to Banksy’s $1.3M Painting That Self Destructed

Love Banksy? Share
Like My Modern Met on Facebook
Get Our Weekly Newsletter
Become a
My Modern Met Member
As a member, you'll join us in our effort to support the arts.
Become a Member
Explore member benefits