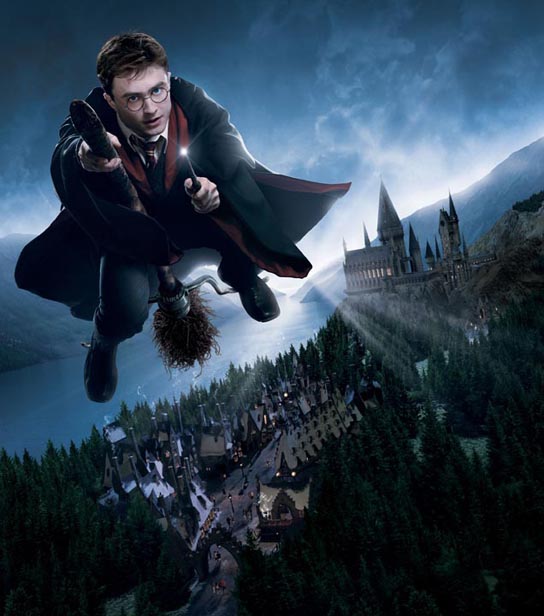 Are you ready for some exciting theme park news? Universal Orlando Resort, together with Warner Bros., today revealed first-ever details about The Wizarding World of Harry Potter. This highly anticipated land will open in spring 2010.

Inspired by J.K. Rowling's compelling stories and characters – and faithful to the visual landscapes of the films – The Wizarding World of Harry Potter at Universal's Islands of Adventure will provide visitors with a one-of-a-kind experience complete with multiple attractions, shops and a signature eating establishment. This completely immersive environment will transcend generations and bring the wonder and magic of the amazingly detailed Harry Potter books and films to life.

Working closely with J.K. Rowling, Warner Bos and Universal are working to construct the most authentic Harry Potter experience possible.

They've planned everything from Hogsmeade shops like Ollivanders wand shop and Zonko's joke shop to attractions like high-speed roller coasters and rides. The coolest part? In Hogwarts castle, Harry Potter and the Forbidden Journey promises to be a thrilling new state-of-the-art attraction that uses entirely new technology to bring the magic, characters and stories of Harry Potter to life!

Here are some of the attractions you'll find come spring 2010. 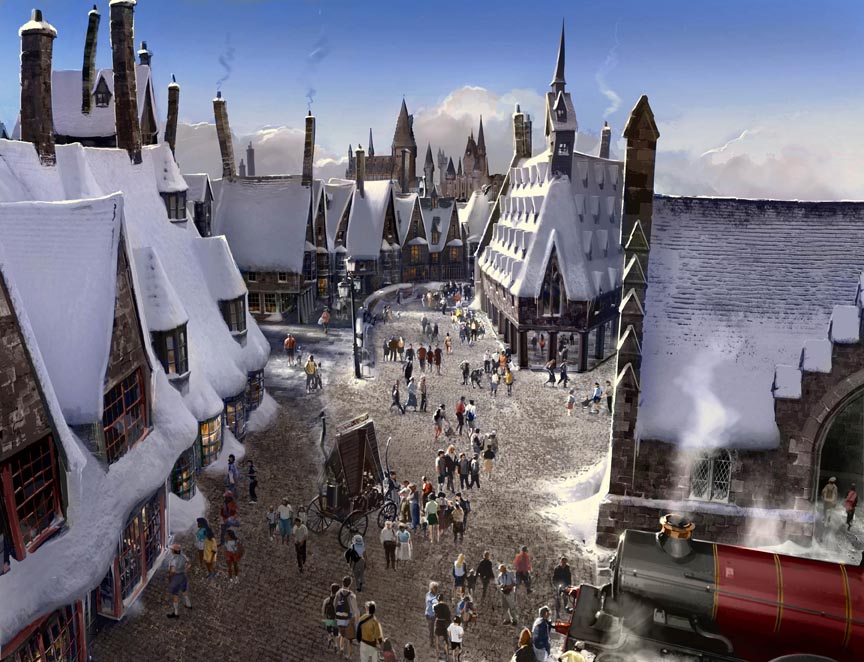 Hogsmeade is the only settlement in Great Britain inhabited solely by magical beings. Students of Hogwarts who are in their third year and above are permitted to visit Hogsmeade during scheduled visits, to shop and mingle with friends. At the entrance of Hogsmeade, billowing steam and an iconic whistle signal the arrival of the Hogwarts Express into Hogsmeade station. 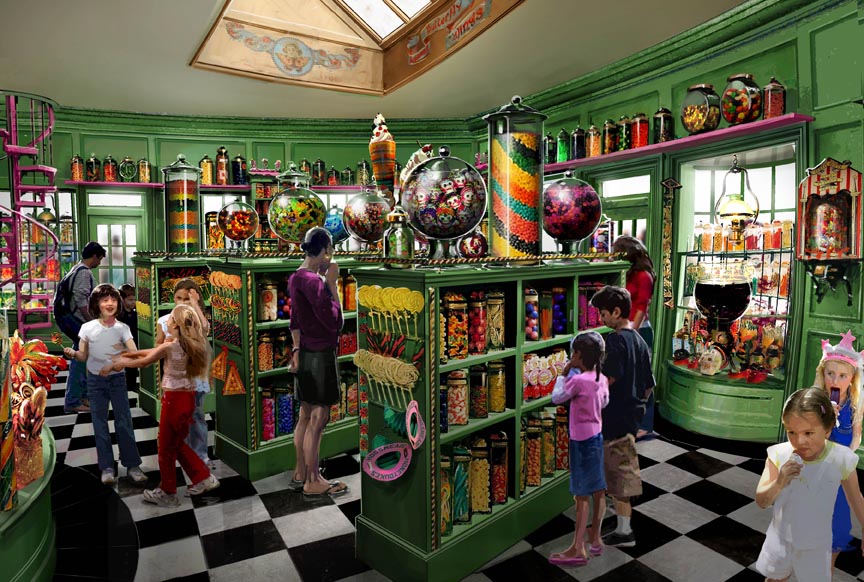 Honeydukes Sweetshop is one of the most famous wizarding confectioneries in the world. It sells wizarding sweets of all descriptions, including Chocolate Frogs and Bertie Bott's Every-Flavour Beans. 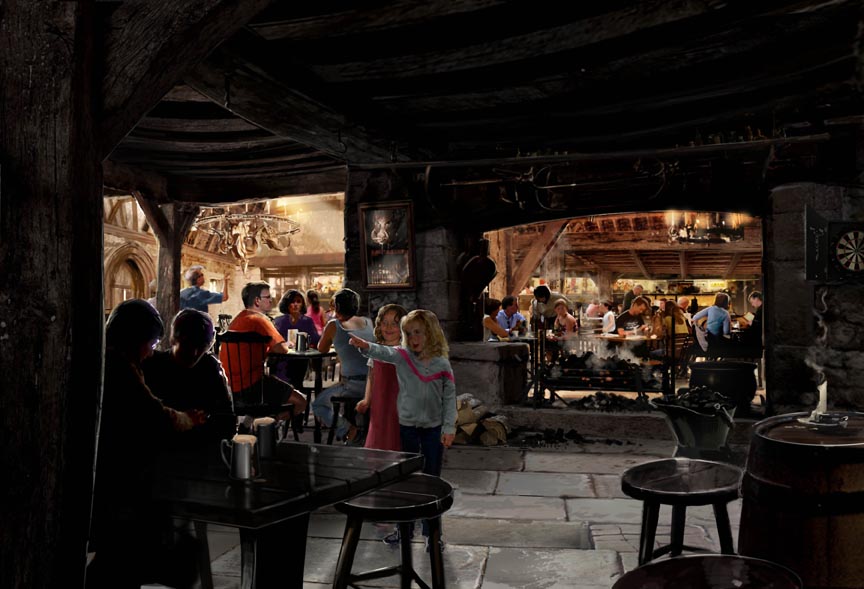 The Hog's Head is a pub, which often attracts a more unusual and private clientele than the Three Broomsticks, and many of the customers hide their faces. It has been host to several important events in the world of Harry Potter. 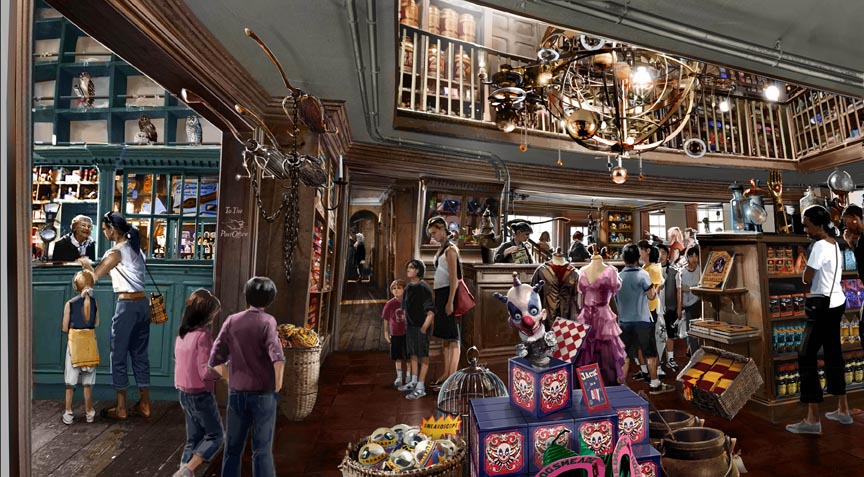 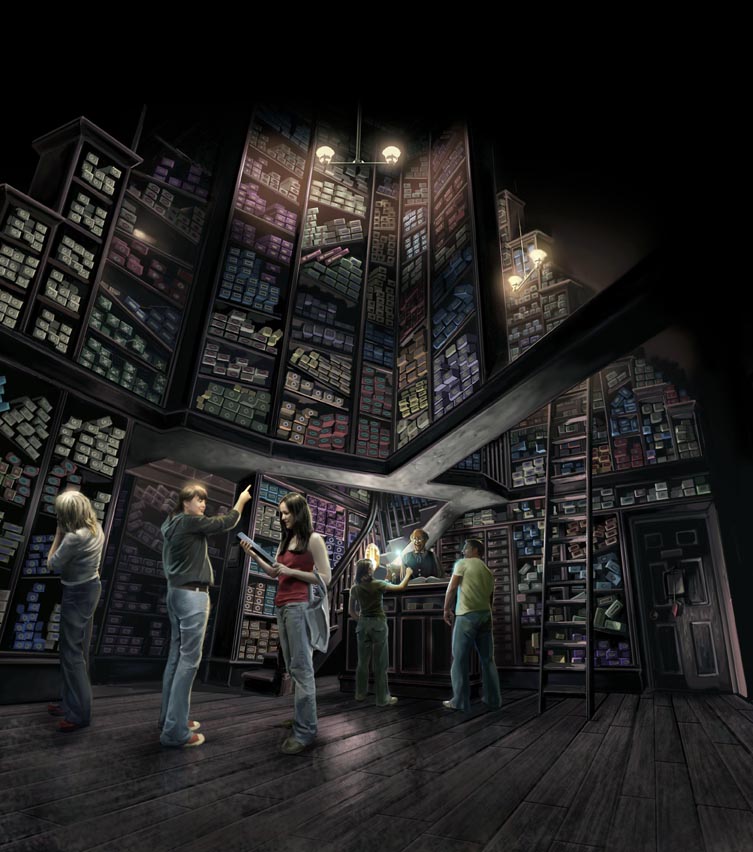 Ollivander's is a fine wands shop where Mr Ollivander, the pale-eyed, white-haired shopkeeper, makes and sells the magic wands to witches and wizards as they enter school or break their old wands. He remembers every wand he has ever sold. 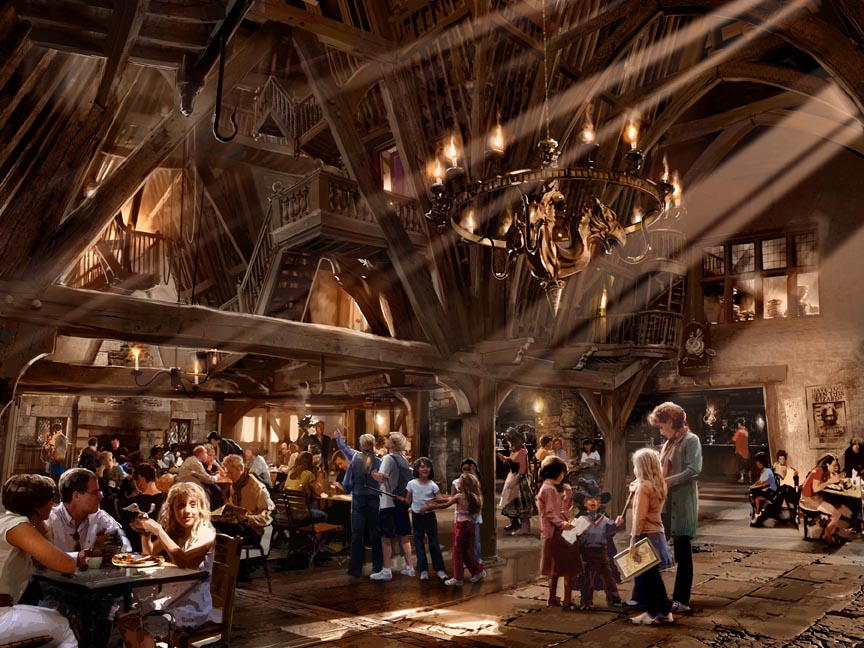 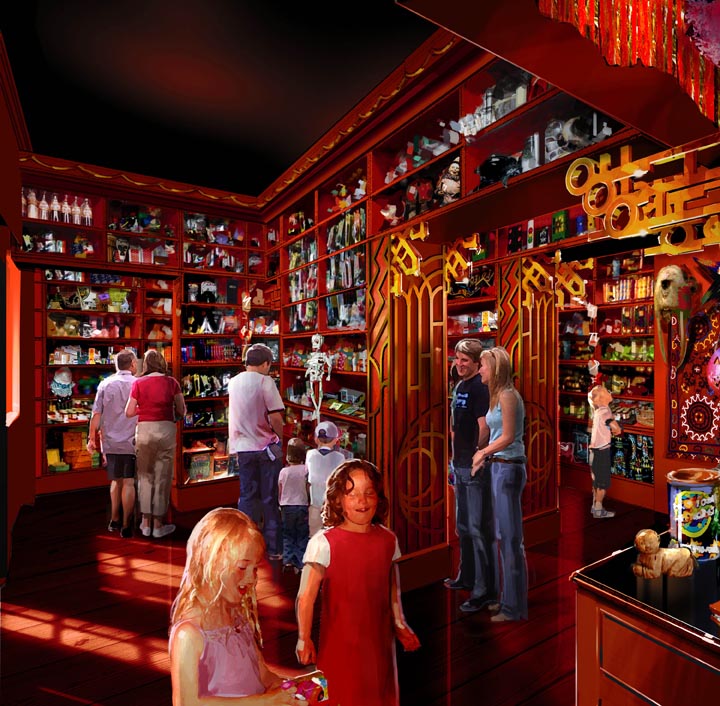 A joke shop with a collection of tricks and jokes, including Extendable Ears, Boxing Telescopes and Sneakoscopes. 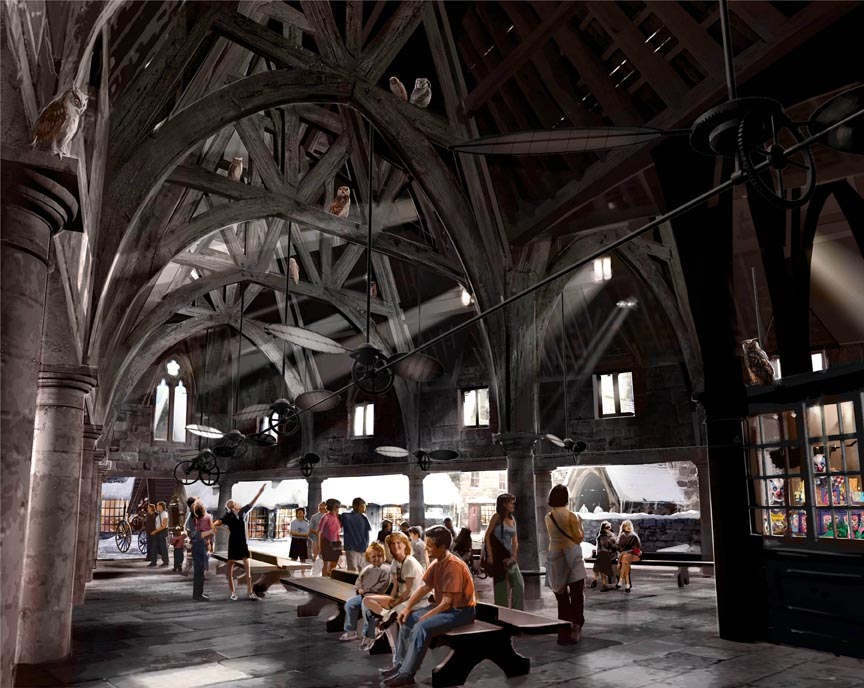 Across from the Three Broomsticks is The Owlery, where owls roost and await their next delivery. 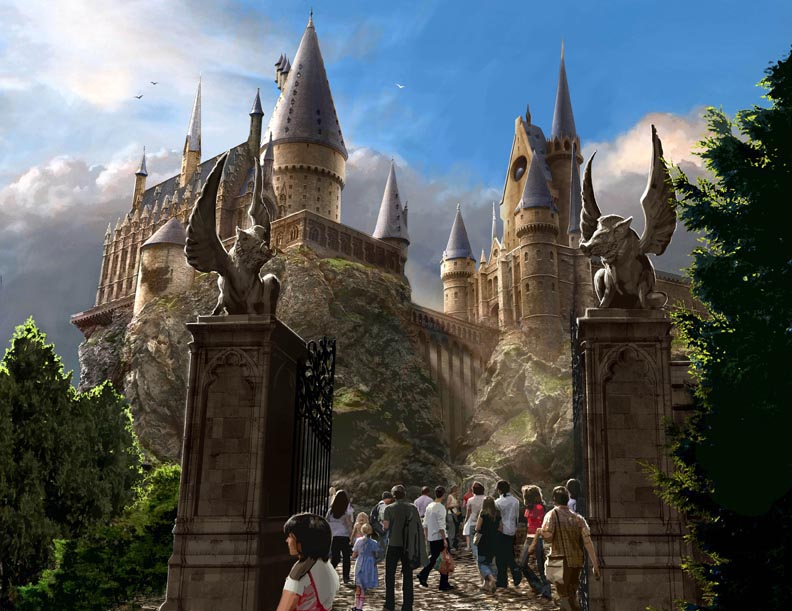 Hogwarts School of Witchcraft and Wizardry is a fictional setting in J. K. Rowling's best-selling Harry Potter series. In the series, it is a Boarding school of magic for witches and wizards between the ages of eleven and eighteen living in the United Kingdom and Ireland. 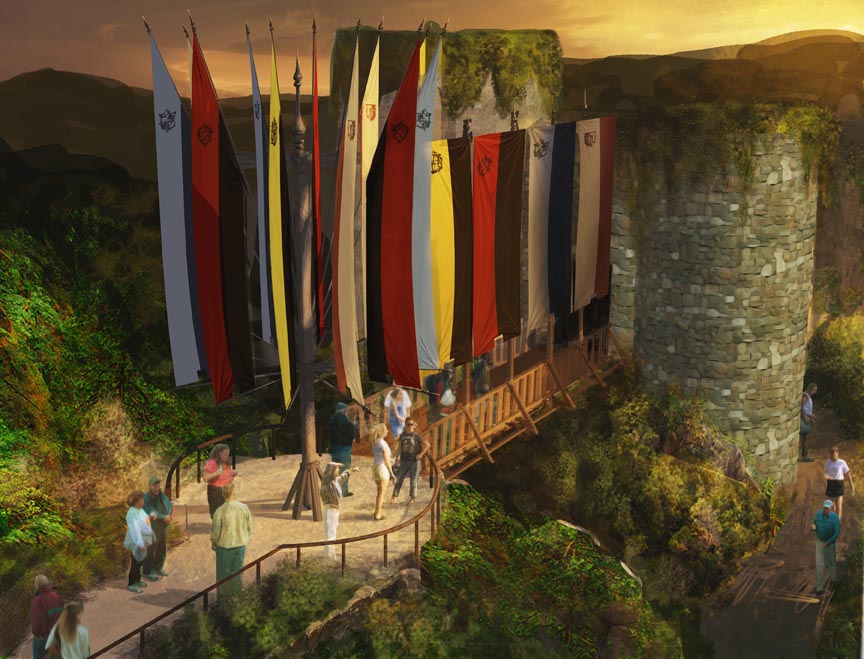 A twin high-speed roller coaster with many iconic elements from the Triwizard Tournament.

Flight of the Hippogriff 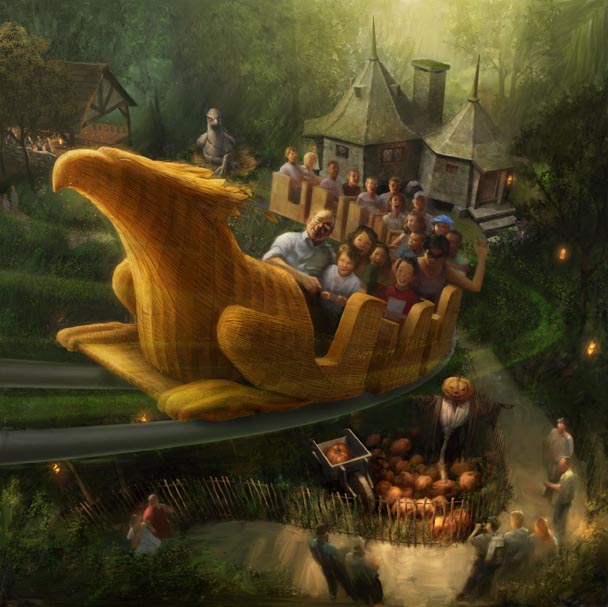 A family coaster simulating a Hippogriff training flight over the grounds of Hogwarts castle. 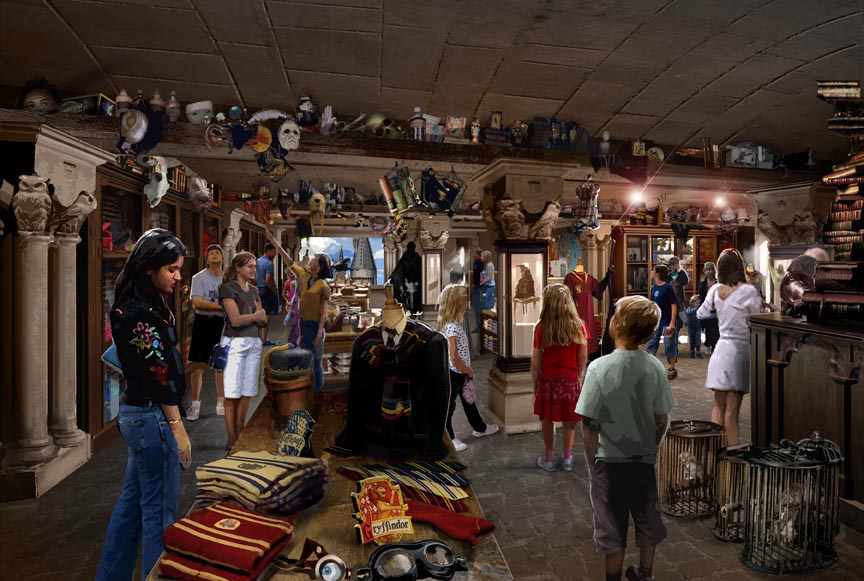 Filch's is full of Ministry of Magic and magical creatures merchandise, Omnioculars, and even remote control Golden Snitches.