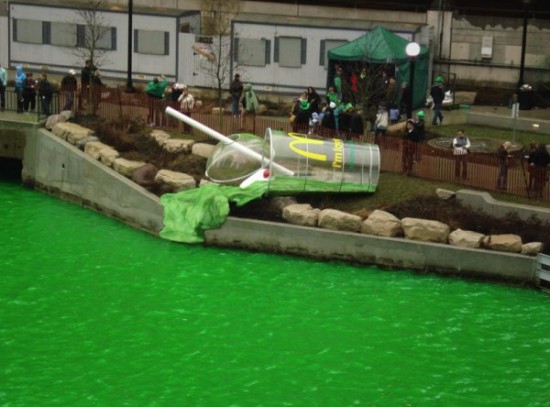 Don't we just love it when advertisers and their agencies surprise us with their cleverness? McDonalds and their agency Leo Burnett recently took advantage of the Chicago river turning green for St. Patty's Day by placing a 24 foot Shamrock Shake next to it.

The Chicago River was first dyed green in 1962 to coincide with the St. Patrick's Day Parade. That year, 100 pounds of dye — stirred up by motorboats — turned the water green for a week. The dye is a fine orange powder that turns bright green when mixed with water. Now, each year on parade day, a crew led by Mike Butler uses about 40 pounds of dye which — depending on river currents — turns the river green for about five hours.

A fun way to build awareness, a nice experience for people who pass by and a good cause. Kudos, McDs and Leo Burnett, on your kick-ass campaign.

Pics via Polkadot and Chicago Now