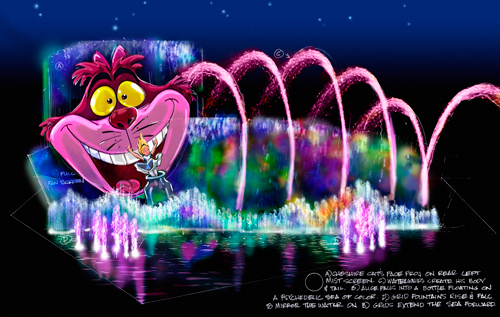 While looking through Alice in Wonderland's new promo shoots, we stumbled upon an interesting bit of information. LA Times is reporting that a World of Color water show will be coming to Disney's California Adventure in 2010. It will be the first major addition of a $1.1-billion makeover planned for Disney's California Adventure through 2012. Described as Disneyland's nighttime spectacle of Disneyland's Fantasmic and the Fountains of Bellagio in Las Vegas, the 18-minute World of Color will feature an array of dancing fountains, movie projections and lighting effects all tied to the original Sherman Brothers musical score from the 1960s television show. Walls of water that take the shape of virtually every recognizable Disney character and skyrocketing fountains will shoot so high they'll obscure the newly renovated 16-story Mickey Mouse Ferris Wheel. New concept art is being unveiled this week and will include an “Alice in Wonderland” sequence where the Cheshire Cat's face will be projected on a fan mist screen while water whips create his body and tail. In the foreground, a diminutive Alice falls into a bottle floating on a psychedelic sea of color amid rising and falling fountains. We're a huge fan of Fantasmic and the Bellagio foundations so we're sure that this new water show will blow us away. Way to go, Disney, for always keeping things interesting.