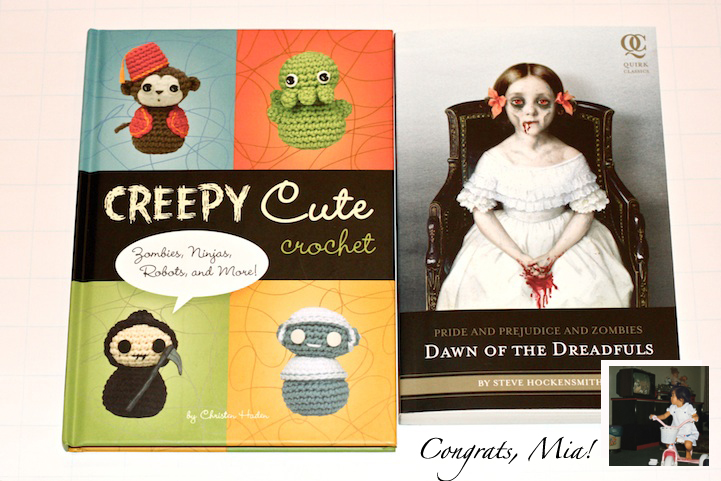 Just wanted to give a big shout out to metropolite Mia for winning giveaway contest #3! She's now the proud owner of two books, Creepy Cute Crochet and Dawn of the Dreadfuls. In case you missed it, here's the scary story that nabbed her these prizes. I was staying at my Aunt's house for the week and one morning she decides to wake me up at the ungodly hour of 7am to go visit my mother's grave. Given it was a Sunday morning, I didn't sleep the night before until about 5am. We first went to the cemetry where my grandparents are buried then to the one where my mom and cousin are buried. I didn't know that my cousin was buried there because she died the year before I was born. It was the tiniest little grave at the top of the hill. Even though I had never met her, I had always wished she was around because as selfish as it sounds- out of my cousins, there were no girls my age to play with…they were either much older or much younger, and the cousins who were my age were boys who enjoyed bullying me or making me cry. I only got back to bed around 12pm to find my cousin Nana snoring away, envious of the fact she was still sleeping. Naturally, it didn't take long for me to fall asleep. At some point I woke up and there was a little girl standing between the foot of my bed and the door. I had never seen her before, she was very pale and had a towel wrapped around her, she must've been my aunt's friends child or something wondering around the house. I opened my mouth to ask who she was, only to find that I had no voice. I tried to get up from the bed but I couldn't move at all. She kept looking into the dark corner as if she was speaking to someone. Then, all I could feel was someone choking me from behind. I could hear Nana snoring in the bed next to me, asleep and unaware, I tried to call out her name but still no sound came out. I tried to fight and get out of the chokehold I was in, but I was struggling. Eventually, I somehow bolted upright to find that the girl and whatever choked me was gone. I woke Nana immediately to tell her what had happened. She said it was probably just a nightmare. A few days later, I was looking at some photos just outside my aunt's room. There was a photo of my aunt and three little girls…the smallest girl in that picture was the same one that was in Nana's room. I asked my aunt who were the little girls, to which replied that they were her daughters (my cousins including Nana) and the youngest girl was Iranna, now lying in the little grave we visited atop of the hill. As shock as I was, I asked her how she had died. Iranna was just over a year old, born the same year as my brother. One day, my mom had a barbeque and all my relatives were there. Everyone fell asleep and were napping and Iranna must have woken up, with no one to mind her, she made her way to the pool and jumped in (my aunt said that she loved playing in the pool…but being so young, she didn't actually know how to swim) My father came home from work, discovered her floating in the pool…jumped straight in with his clothes on, but it was too late. She was gone. My aunt said she doubted Iranna had caused me any harm, she said that it was probably Jinn (mischievous spirits) that followed me from the graveyard. Whatever it was, I was still afraid to fall asleep for weeks after that. For those of you who didn't win, don't worry, the best is yet to come. I'll be throwing out another prize package later today! Related: Ready for Some Giveaways?