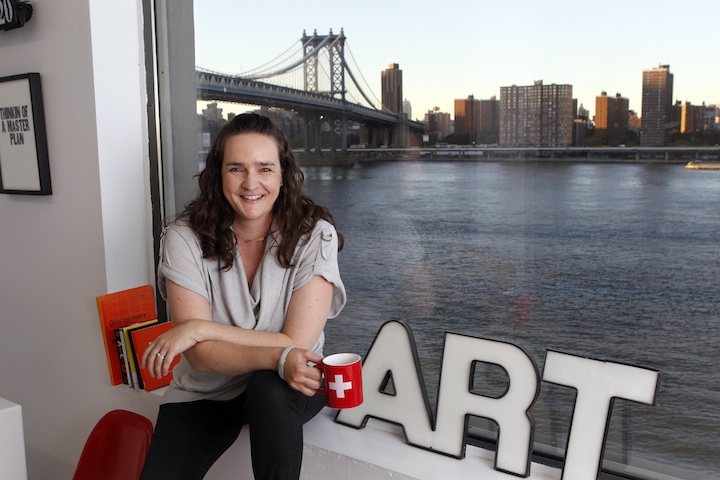 It is with great pleasure that I present to you our next installment of our Content Curator series, by featuring the one and only Tina Roth Eisenberg, better known as SwissMiss. Tina is one of those people that will inspire you not just with her design-sense but, more importantly, through her actions. Having met her myself at one of her CreativeMorning events, I can wholeheartedly say that she's one of those people that finds joy in empowering others to succeed.

One of the proudest moments I've experienced in running this site was when I went up to Tina to introduce myself. Like a frantic 10-year-old year old meeting Justin Bieber for the first time, I gushed about how much I admired Tina as a designer and businesswoman. No sooner had I uttered the words, “I love SwissMIss!” did Tina say to me, “I love My Modern Met!” An acknowledgement like that stays with you and makes you only strive to do better.

Tina was kind enough to be a part of our ongoing Content Curator series, letting us in on her world. With a massive following on Twitter (over 200K followers) and a million people visiting her site each month, she's a force to be reckoned with. Read our one-on-one interview with Tina below. 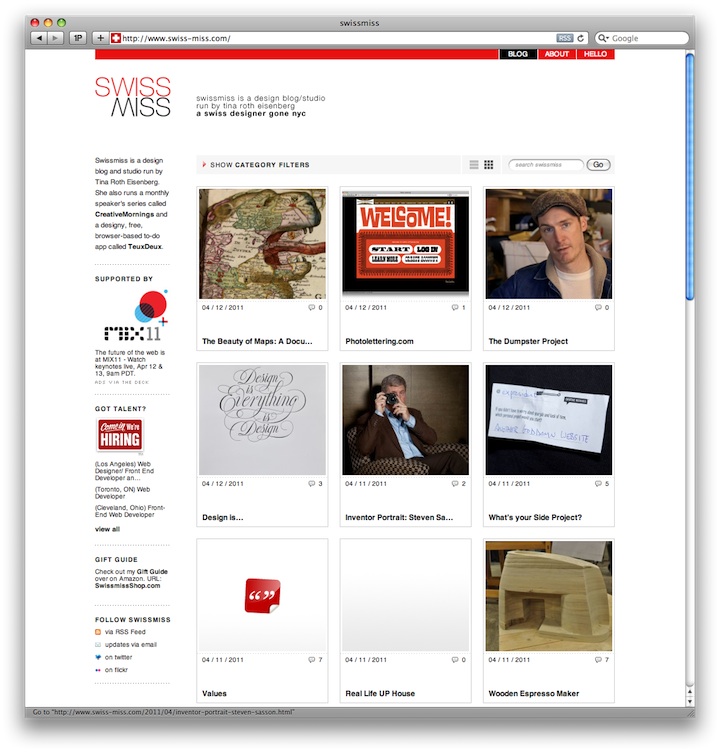 Can you please introduce yourself to our community?
I am a Swiss Designer that moved to New York City 13 years go in the hopes to find a 3 month internship. Well, I never left. I am still here! Now, married, with two children and running my own, multi-facetted business out of DUMBO, Brooklyn. Up until a year ago I did client work, mostly doing websites and web apps. I have stopped having clients and am now focusing on three of my side projects which all have turned into accidental businesses.

I run a popular blog called SwissMiss, a to-do app called TeuxDeux and organize a monthly breakfast lecture series called CreativeMornings. I work out of a co-working space I started 2.5 years ago called Studiomates.

How long have you been running your blog?
I started my blog in May of 2005 as a personal visual archive. I now have 1 million unique readers a month. Considering that I grew up in a 3k people town on the Swiss Country side, that number is making my head spin.

SwissMiss is called an influential design blog. Why do you think yours stands out from the crowd?
This question always makes me a little uncomfortable. I really don't know. I assume it has to do with the fact that I keep it somewhat personal, that it's truly only me blogging, so you get a glimpse into my life/thinking/world. I also try to keep an upbeat tone, so, most likely, you'll find something that makes you smile.

My proudest moment has been when I just recently was able to extend my 1-year-client-sabbatical indefinitely because I now am able to sustain myself with what first were side-projects. What is interesting is that both the birth of my daughter and 4 years later of my son have actually pushed me more into a successful independent entrepreneurial existence. It feels as that the circumstances of having children have made me more focused and driven. When you have kids you have less money and less time to do things, so you have to learn how to bootstrap and work more efficiently, pretty much the same circumstance as when you're run a side projects. I don't think I would be where I am right now if I didn't have kids. They have made me more focused and driven.

What's the best opportunity that arose from running it?
Running my blog has connected me with a huge network of amazingly talented people. It has given me a credibility in the design industry that I probably would have not been able to achieve as quickly by *just* doing awesome design work.

Tell us about CreativeMornings.
CreativeMornings is a breakfast lecture series I started 2.5 ago. I felt there was a need for an accessible inspiring event in the morning. Conferences are wonderful but they take up a lot of time and are expensive. So, why not create a conference like environment in form of a breakfast lecture? Voila, the idea for CreativeMornings was born. It obviously hit a nerve as we now have chapters in 4 cities. (New York, Zurich, Los Angeles and San Francisco) Chicago is going to launch in June and London most probably sometime this summer. We've had truly fantastic speakers such as Milton Glaser or Michael Bierut. Did I mention CreativeMornings are free?

What's been one of your most popular posts and why do you think it was so popular?
That's easy to answer: When I was 7 months pregnant with my son I took crowd-sourcing to the extremes. I asked my readers what they would name our boy if it had to be a 4 letter name. It has been the most commented post in SwissMiss history with over 320 comments. We had an impressive library of names to pick from, but in the end, went for a family name: Tilo Red.

What advice would you give to others who are looking to get into design?
Do as many side projects as you can.
Be hungry and try to learn new things.
Experiment.
Surround yourself with inspiring, smart people.
Try to find a side of ‘design' that really makes you happy.
If an opportunity comes your way that scares you, take it.

—>Make sure to head on over to SwissMiss and check out her site (if you haven't already) and bookmark it as one of your daily reads. Designer or not, you'll appreciate it for all her great findings. Finally, if you're in any of these major cities listed above, check out a CreativeMornings session. You'll be glad you did.

Thanks for the interview, Tina, and for inspring us with your story.