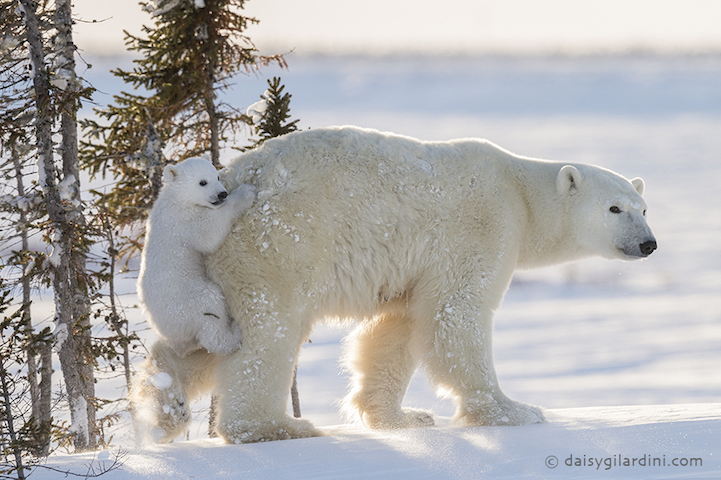 Every year, from mid-February to mid-March, a big event takes place at the Wapusk National Park in Manitoba, Canada: the polar bear mothers get ready to leave their maternity dens for the first time since November with their newborns in tow. They exit their hideaways knowing that, on the Hudson Bay, pack ice seals are giving birth to their pups, which provides them an easy source of food. Last year, wildlife photographer and Nikon Ambassador Daisy Gilardini spent 13 days in the field and waited for 117 hours in subzero temperature to have a first glimpse of this special trek. 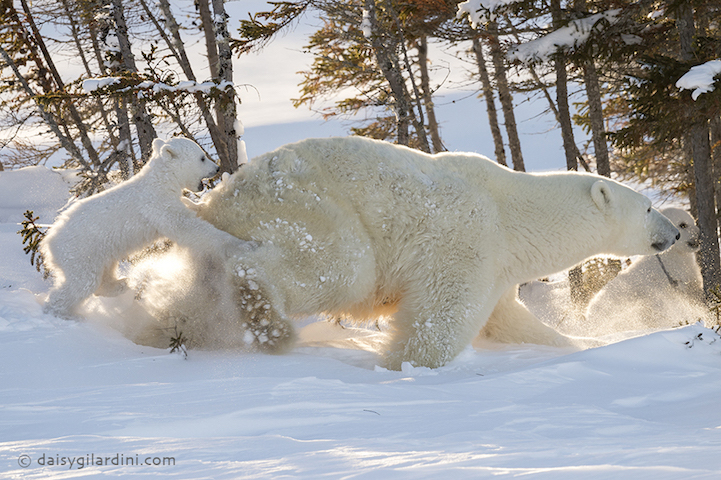 Not only did Gilardini brave a long wait, but she also had to contend with wind gusts reaching 60 to 70 km/h (37 mph to 43 mph). “It is extremely difficult and rare to witness the exit of the bears from the dens and one has to face extremely challenging conditions,” she tells us in an email. “In these temperatures it is difficult to operate the camera because you need big gloves to prevent your hands from freezing and the cold drains the batteries very fast.” Gilardini explains. “I always carry at least three sets of newly charged batteries, which I keep in a pocket very close to my body.” She also refrains from exposing her equipment to the elements–when the bears are in their den, her camera rests in her bag.

While protecting her expensive gear is important, so is staying warm. At those temperatures, this means doubling and tripling attire. “I usually wear three to five layers–bottom and top–with at least one or two made of down feathers,” she explains. Her outfit also included three sets of gloves, two pairs of heavy socks, insulated boots, a balaclava, and a neoprene face mask. 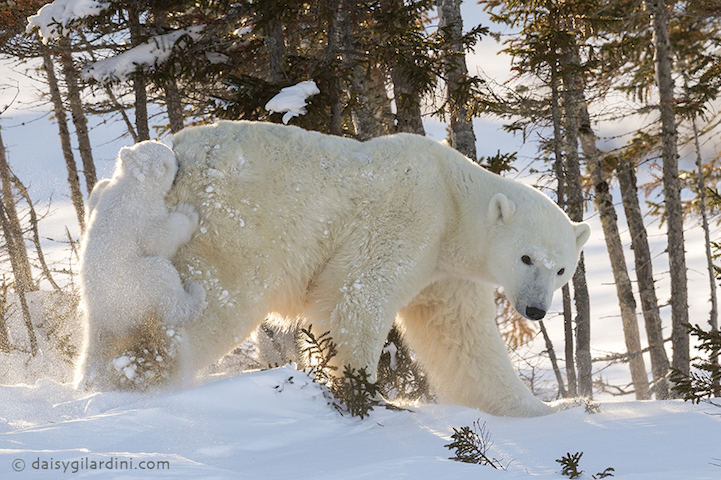 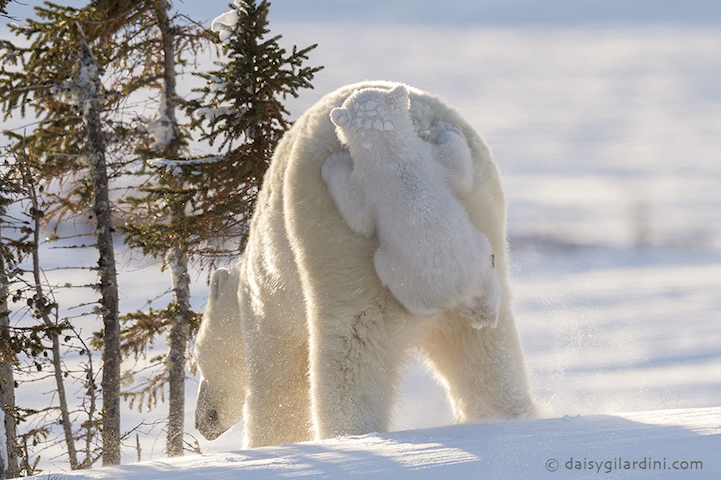 At the end of her time in the snow, Gilardini's patience was rewarded. She had 12 hours of effective shooting with five different polar bear sightings. When we asked her what her favorite part of the experience was, she told us:

In the field the most memorable episode is when we encounter this mama bear resting with her two young cubs in a day den on the way to the pack ice. Day dens usually consist of wind-protected areas as snowdrift refuges or tree shelter.

She was extremely calm when our vehicle reached the location and we could photograph her and the cubs for a few hours before she suddenly decided it was time to leave.

She rushed downhill in deep snow when one of the two cubs decided it was much more convenient to hitch a ride on mama's behind. He jumped and reached out holding on with a firm bite on mama's fur backside: an extremely funny and totally unexpected behavior.

Wildlife photography is all about patience and perseverance but despite the challenging conditions and the long hours waiting, the experience of witnessing something so rare is simply priceless and exhilarating. 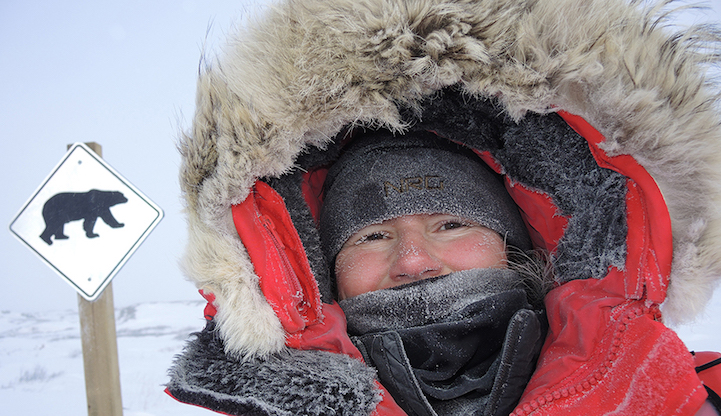 Gilardini hopes that her images and short video will make us think about how we impact the planet in our daily lives. “If humankind wants to survive and evolve with our planet we have to act responsibly,” she says, “by acknowledging with humility that Nature is not depended by us but we are dependent by Nature.”

“Science is the brain,” Gilardini continues, “while photography is the heart and we need to reach people's heart and emotions in order to move them to action, for Nature and for us.”

My Modern Met granted permission to use photos by Daisy Gilardini.