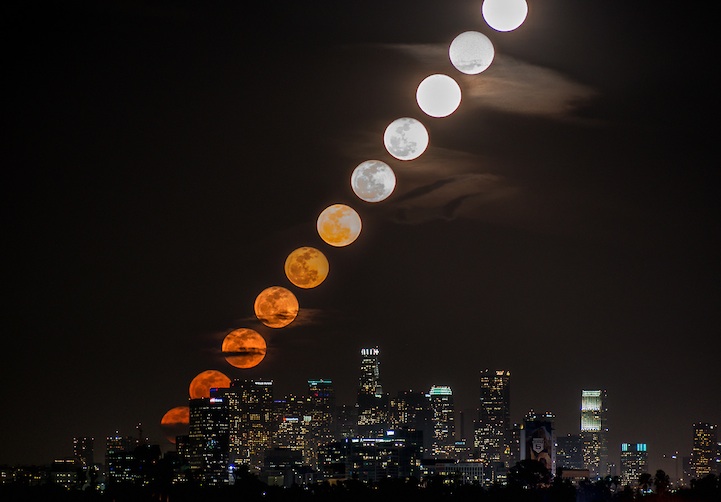 About a week ago, 26-year-old motion designer Dan Marker-Moore shot a gorgeous timelapse of a full moon rising behind Downtown Los Angeles. It was taken on his Olympus OMD-EM5 camera and a 100mm lens. On April 4, he then released the photo above, which he calls “Moon Rise Time Slice.” It's a stunning collage of 11 still frames taken over 27 minutes and 59 seconds.

If you're curious as to why the moon is red near the horizon, watch this video by PBS' It's Okay to be Smart. (Hint: It's the same science that makes sunsets red and orange.) In the interesting video, you'll also learn why the sky is blue.

Update: We got in touch with Dan to ask some quick questions about his process. Reach that interview, below.

Did you shoot the timelapse knowing it was going to be a full moon?
Yes, I was planing on shooting the full moon rising behind downtown. A month earlier I happened by chance to catch a still of the full moon rising. I then decided to plan on setting up a timelapse of the next one. Technically, it was a waning gibbous as the proper full moon was at around 2 AM earlier that day.

Where were you located?
i took the timelapse from the garage roof at my work in Fairfax village, Los Angeles, facing Downtown LA.

With the collage, was there any color correction done in Photoshop?
The photos as a set were adjusted in Adobe Lightroom – highlight reduction, contrast boost, etc. In Photoshop, I used the layer masks to blend the photos together.

What kind of reaction did you get?
Initially one of my favorite blogs, booooooom, picked up my tumblr post and it started spreading pretty fast. I was pretty happy to see it show up on a few science blogs, as well.

Were you surprised by the response?
I was more surprised that the moon came out from the horizon where it did. Initially, I I thought it would rise further north so I had to quickly re-frame my shot to maximize the moon.