Rescued Fawn Refuses to Leave the Man Who Rehabilitated Her 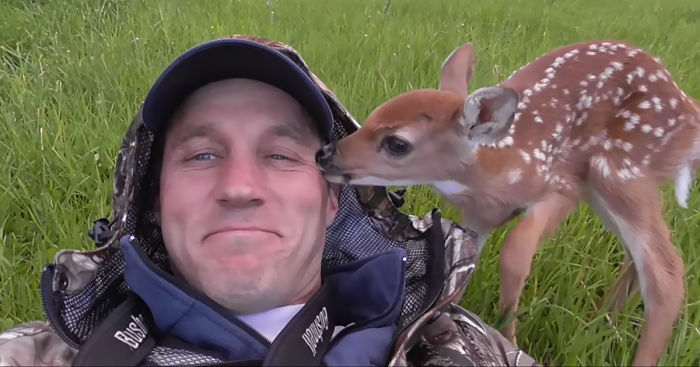 Nature lover Darius Sasnauskas beautifully captured the story that unfolded as he rehabilitated an injured fawn. It all started when a deer gave birth to two babies in his backyard near Yellowstone National Park. While one of the fawns was perfectly healthy, the other ended up with an injured front leg.

“The fawn was helpless,” Sasnauskas told The Dodo. “She was just born earlier that day [and] still had some blood on her belly.” Sadly, this fawn was left behind because she couldn't keep up with her family. The animal loving outdoorsman felt there was no choice by to rescue this innocent critter. “I do not support keeping wild animals as […] pets,” Sasnauskas writes. “But this was [a] special situation.”

Ultimately, Sasnauskas decided to adopt and essentially rescue the baby deer, so that she wouldn't be attacked by any nearby predators.

Before long, the newborn fawn settled in and made herself right at home. “She was very hungry and had no problem with any of my pets. [For the] first week, she slept by my bed on my shirt, and the shirt became very important to her. She had to have it to be able to sleep,” Sasnauskas explains.

To fix the fawn's broken leg, her caretaker fashioned an oatmeal box into a makeshift splint that would help her limb grow stronger. Thanks to Darius' feeding, cleaning, and round-the-clock care, the fawn learned to walk again.

She even formed an adorable relationship with Sasnauskas' Bernese mountain dog Mack–”Mack was [a] big help because he just loved her and cleaned her so good.”

When Darius realized that the fawn had made a full recovery, he thought it was time to set her free. However, he was surprised by how difficult it wound up being to release the baby deer back into the wild. She always found a way to return to him.

Then, one fateful night, the fawn spotted her mother and went to reunite with her family. Sasnauskas' work as a wildlife caretaker resulted in a truly happy ending.

After several months, Sasnauskas glimpsed the deer once more as she was happily leaping through the brush with her mom and her sibling. “It is [a] very, very good feeling seeing them safe roaming around.”

via [Bored Panda, The Dodo]