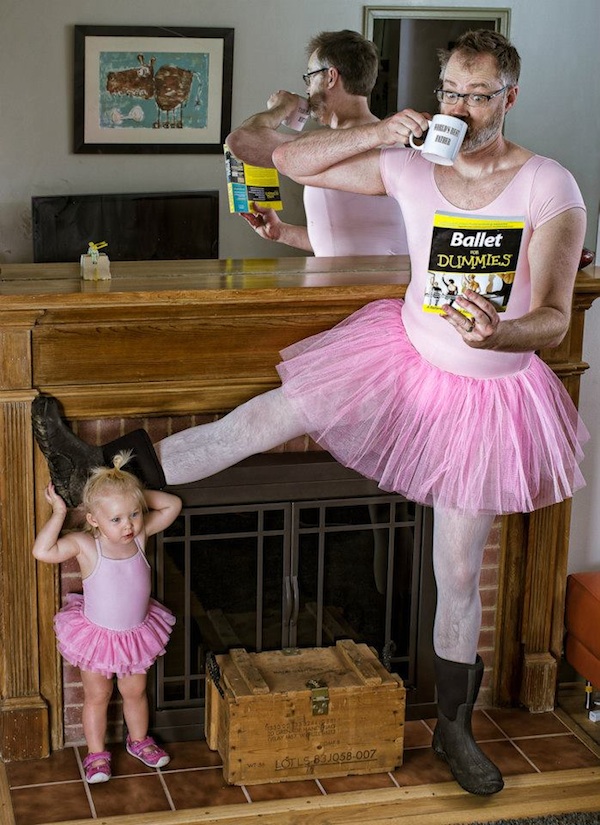 Every once in a while, we'll see an artist's work spread throughout the web at lightning speed. There's no exact science to it, you never know what will go viral. It's only happened a handful of times on My Modern Met – Jason Lee's creative photos of his daughters and Sacha Goldberger's hilarious images of his grandmother are the two that quickly come to mind.

When I first came across Dave Engledow's hilarious (and sometimes frightening) photos of him and his daughter Alice Bee, I felt that excitement again. After we wrote about him, we saw his story quickly jump from site to site – Laughing Squid, Buzzfeed, and Huffington Post all picked it up – and then, a few days later, to our surprise we learned that Dave and his daughter were going to be on the Today Show.

As busy as he must now be, we were still able to catch up with him for this interview. Read that below, while enjoying more of his highly creative photos. 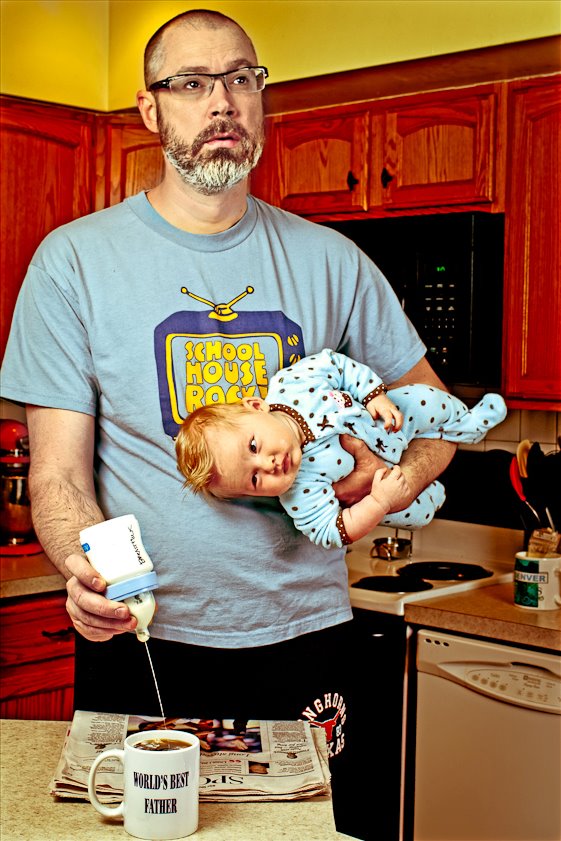 What prompted you to want to create this project?
The first image in the series was intended to make fun of myself and show just how clueless and sleep deprived I felt as a new father. I had the idea to absentmindedly squirt Alice Bee's milk into my coffee, and I decided at the last minute that it would be funnier with one of those silly mugs with an unprovable superlative like “World's Best Father.” After receiving a lot of positive feedback from friends and family on that image, I decided to create a series of images featuring the mug, the clueless dad character, and the baby in dangerous or neglectful situations. The goal has always been to create something entirely unique for Alice to laugh at when she gets older; secondarily, I wanted to post pictures to Facebook that would not only resonate with other parents, but that would also make my friends without kids laugh. If I can get hipsters who hate baby pictures on Facebook to actually hit the “like” button on one of my photos, I count that as a win. 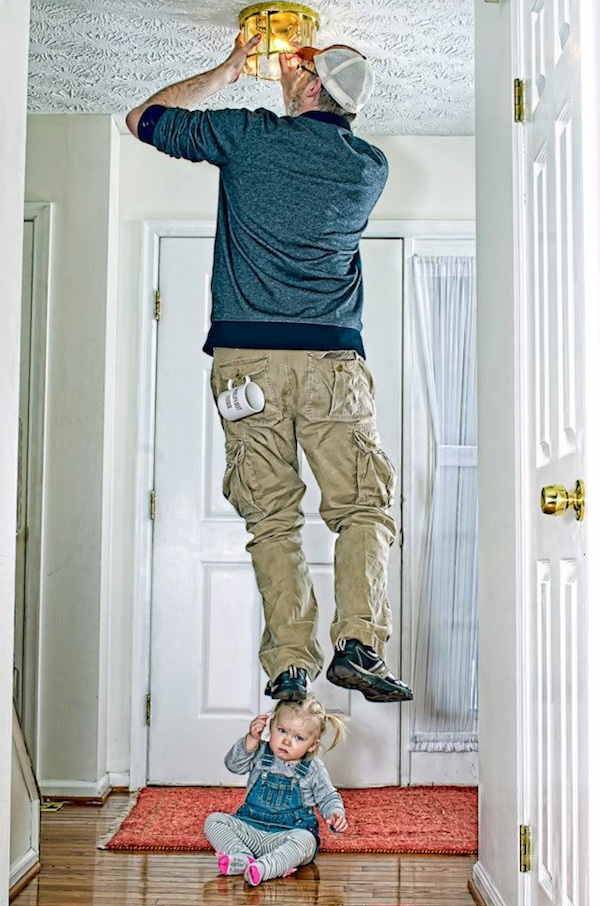 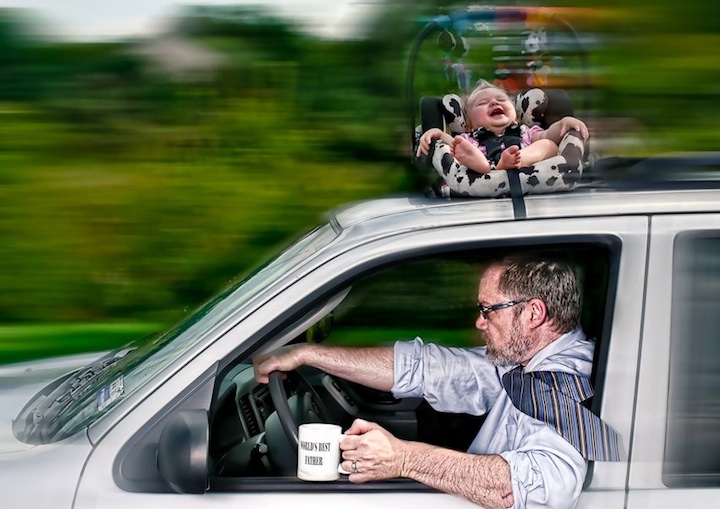 How long has this project been in the works?
The first shot was taken when Alice was about 8-weeks-old. The second shot in the series was taken when she was 6-months-old, and we've been doing 3 to 4 per month ever since. I always hoped to get to 100, and if we're able to keep our current pace up, we should hit that mark well before her third birthday. 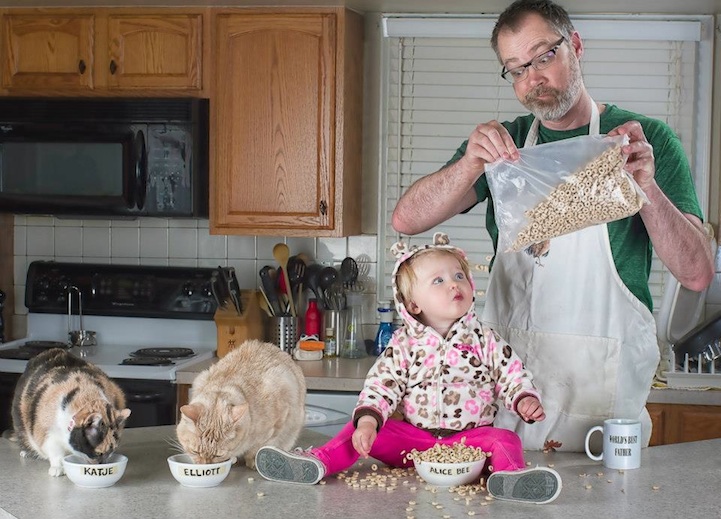 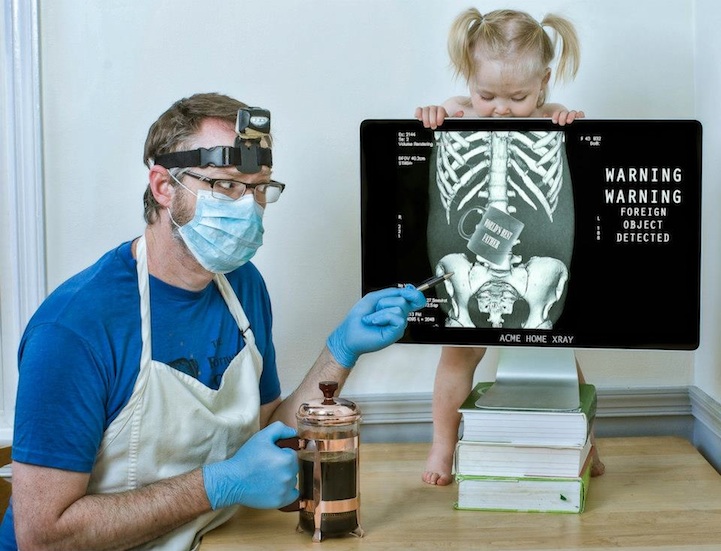 What are some funny comments you've received?
I've had a couple of people tell me that these photos have inspired them to want to have children, which is pretty funny when you think about. Someone the other day posted “I'll take Bee over Boo Boo any day” which also made me laugh. I've also received many comments from parents for whom the images trigger memories of their own missteps as parents.

Here's a particularly funny one: “My husband is a brilliant surgeon who graduated cum laude of college and residency, we have five kids and he is absolutely clueless as to the ‘ins and outs of parenting.' You'd think he'd be an expert by now, with five! I once caused an outrageous scene, while at the Grand Canyon, because he sat our 8-month-old on the railing, to enjoy the view, while our 10-year-old climbed a nearby tree whose branches overlooked the endless drop. He means well, but for a smart man… well, you get the picture! Your work depicts my husband's shenanigans with our children PERFECTLY!” 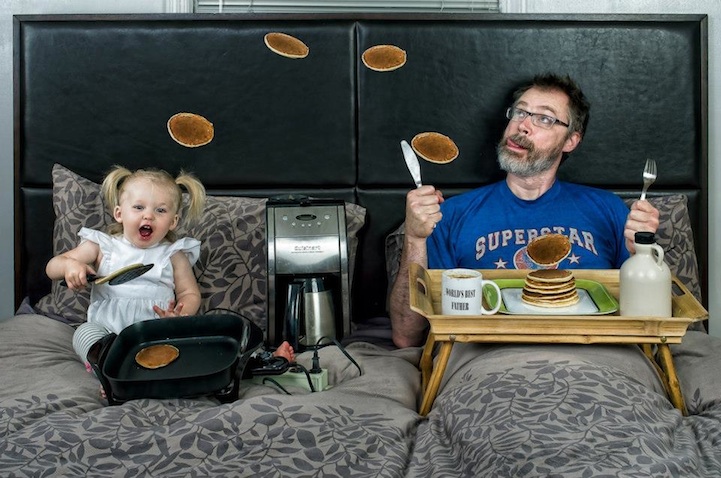 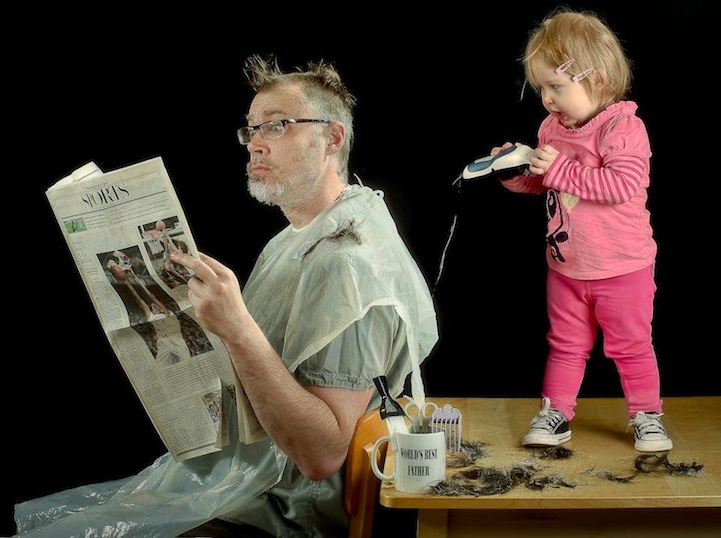 What have you learned in the process?
I've learned to be patient with our daughter. I've learned that we shouldn't try to get her to perform right before naptime or if she hasn't eaten in a while. I've learned that a LOT of parents out there have the same, warped sense of humor about parenting that my wife and I have. But I think the most amazing thing I've learned, as these images have gone viral all over the world, is that people all over the world, regardless of religious beliefs, political leanings or nation of origin, have somehow connected with these images. I'll post a picture and I'll see it get “liked” by fans in Israel and Iran, by friends who are politically conservative and friends who are politically liberal. It makes me hopeful. 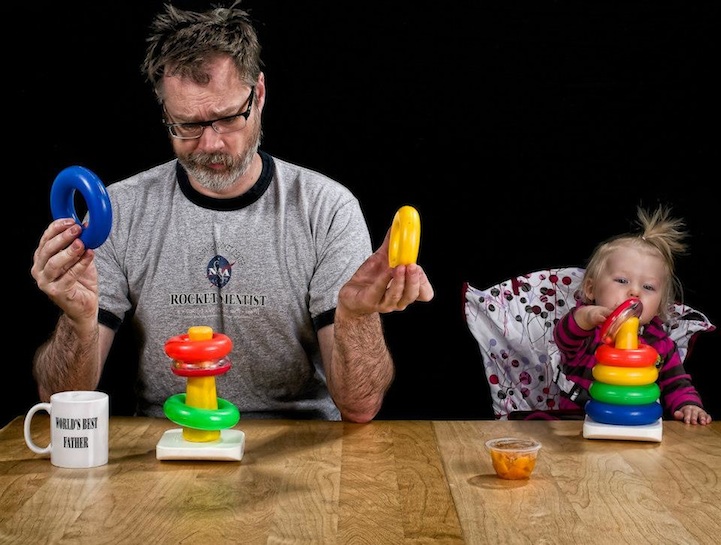 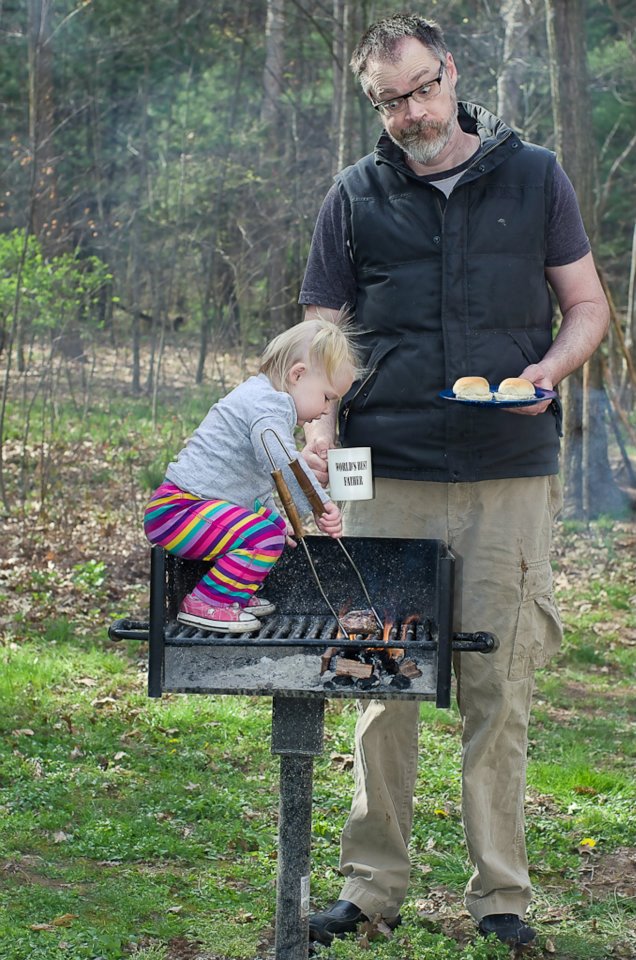 Any tips for others wanting to take their own funny family photos?
Think of a story you want to tell with the image. Every parent has funny stories to tell about raising their kids, so dip into that well for inspiration. Once you have the idea, set aside a good chunk of time to get it right (I usually take 1-2 hours to set up the lights, and 1-2 hours to get my shot and Alice's shot, and then another 6-20 hours editing), be patient, and keep shooting until you get the shot you want. Take lots of breaks if working with a small child, and most importantly, have fun. Oh, and of course, safety first – no photo is ever worth actually putting your loved ones in harm's way.

Thanks for the interview, Dave, and please give our best to little Alice Bee.