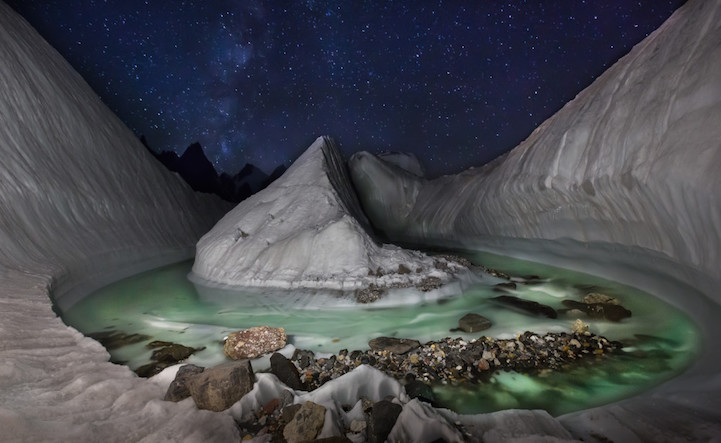 Thanks to the help of a drone, Polish photographer David Kaszlikowski captured a stunning scene atop a glacier near the K2 mountain, one that he wouldn't have ever discovered otherwise. The quest to find a unique Himalayan locale started while he was shooting the upcoming documentary called K2 Touching the Sky. Kaszlikowski wanted a personal project to work on during his downtime, and so he sent his DJI Phantom drone to check out the scenery surrounding the world's second-highest peak.

The device found a secluded spot near Concordia, which is the area below K2 where the Baltoro and Godwin-Austen glaciers converge. Kaszlikowski noticed that there was a section of glacier surrounded by a 65-foot-wide pool of water. “The place was special, making a very clean graphic frame,” he told Wired. “It was disappearing, melting, changing its form every day. It was quite obvious nobody will photograph it again like me; nobody will see it the same way the next season.”

To capture the awe-inspiring sight, Kaszlikowski and a guide hiked to the spot at night, where he used a 30-second exposure shot with a Canon 5D Mark III. While the shutter was open, he illuminated the environment with an LED. The result is a surreal, eerily-glowing form that looks as though it's from another planet.

The unexpected location is one that Kaszlikowski would've missed on his own. And as a veteran in the industry, he's seen how improving technology, like drones, can help photographers get the best shot possible. “But one thing never changes,” he says. “You have to follow your vision.” 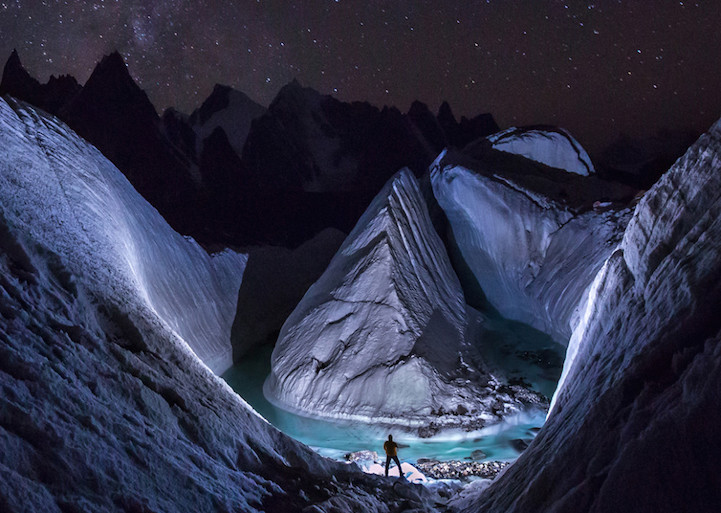