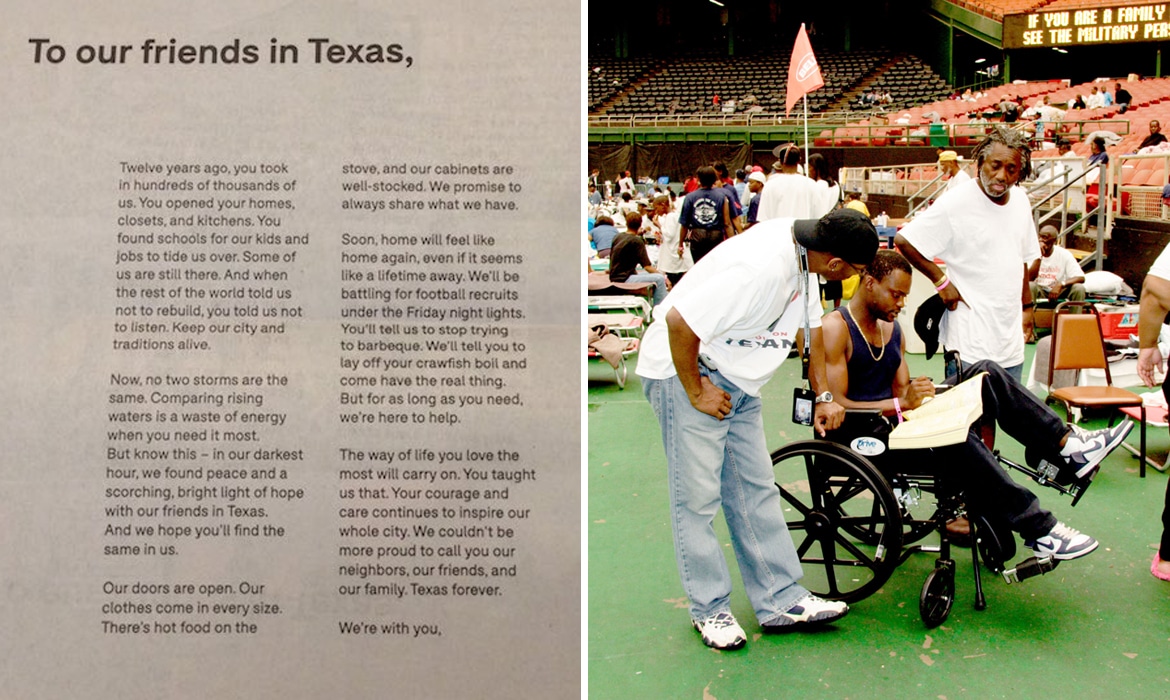 In the wake of natural disasters, we're inspired to see that humanity—despite its differences—comes together to work towards one common goal: helping those in need. In 2005, the devastation of Hurricane Katrina saw people from around the country pitching in to aid disaster relief efforts in New Orleans. Houston played a big part in this; the two cities are about 350 miles apart, and during that time, the Texas metropolis opened its doors to Louisiana evacuees—including its school system and the Astrodome stadium, which transformed into a giant shelter.

Now, 12 years later, Houston is dealing with the aftermath of Hurricane Harvey. As people unite to help its residents, New Orleans hasn’t forgotten about the compassion that the city showed back then. In the September 10th issue of the Houston Chronicle, New Orleans offers a message of hope and that they intend to repay their kindness. Their full-page ad, posted on Twitter by Chronicle editor Matt Schwartz, is addressed “To our friends in Texas,” and reads as follows:

To our friends in Texas,

Twelve years ago, you took in hundreds of thousands of us. You opened your homes, closets, and kitchens. You found schools for our kids and jobs to tide us over. Some of us are still there. And when the rest of the world told us not to rebuild, you told us not to listen. Keep our city and traditions alive.

Now, no two storms are the same. Comparing rising waters is a waste of energy when you need it most. But know this — in our darkest hour, we found peace and a scorching, bright light of hope with our friends in Texas. And we hope you'll find the same in us.

Our doors are open. Our clothes come in every size. There's hot food on the stove, and our cabinets are well-stocked. We promise to always share what we have.

Soon, home will feel like home again, even if it seems like a lifetime away. We'll be battling for football recruits under the Friday night lights. You'll tell us to stop trying to barbeque. We'll tell you to lay off your crawfish boil and come have the real thing. But for as long as you need, we're here to help.

The way of life you love the most will carry on. You taught us that. Your courage and care continues to inspire our whole city. We couldn't be more proud to call you our neighbors, our friends, and our family. Texas forever.

We're with you,
New Orleans

This letter reflects the truth that no one makes it through this world alone. Bad things can happen to anyone at any time. Rather than punishing people for being down on their luck, it’s important to practice empathy and express compassion towards others when they need it the most. And when the time comes to help someone else, like New Orleans, they can extend that helping hand.

In 2005, Hurricane Katrina devastated New Orleans. Houston opened is doors to disaster relief, transforming the Astrodome into a shelter for evacuees. 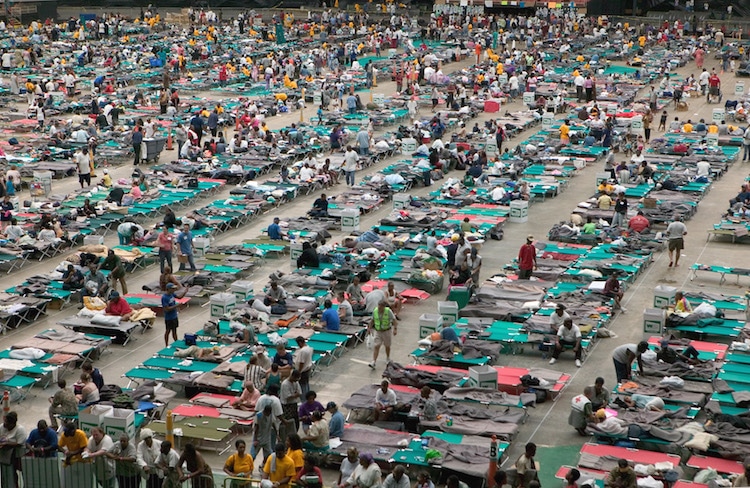 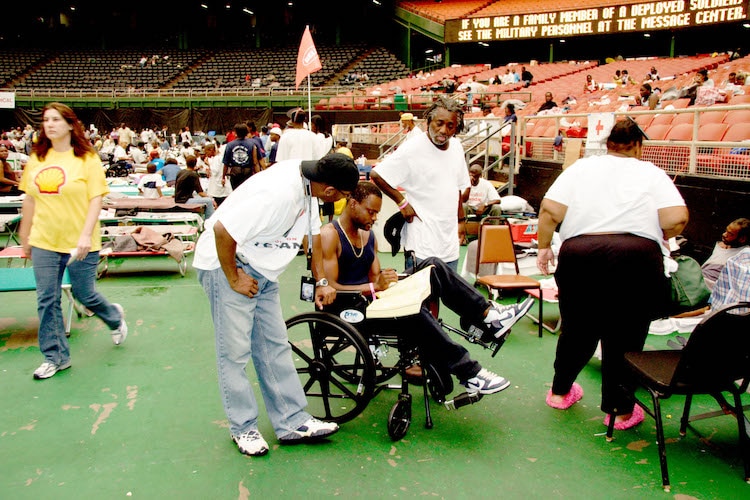 Houston, TX, September 3, 2005: An evacuee in the Houston Astrodome looks through a yellow pages for housing information. Thousands of displaced citizens were moved from New Orleans to Houson in a FEMA organized bus program.
Photo: Ed Edahl/FEMA

Now, Houston is dealing with the aftermath of Hurricane Harvey, and New Orleans is ready to repay their kindness. 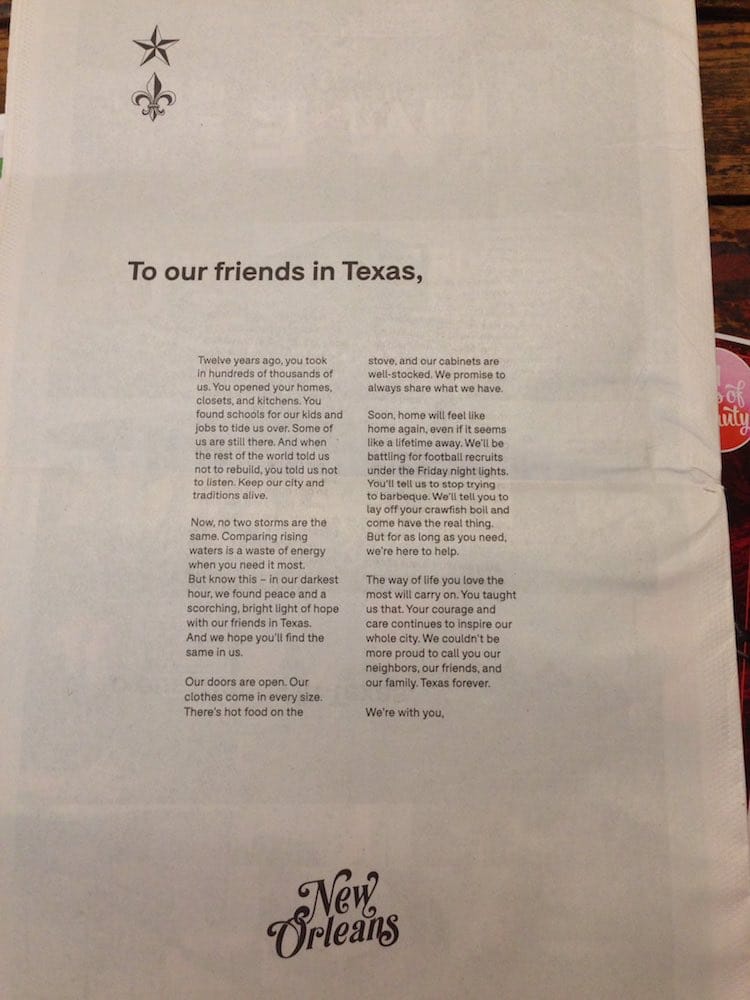 This full-page ad in the Houston Chronicle is a heartwarming expression of hope and compassion during difficult times. 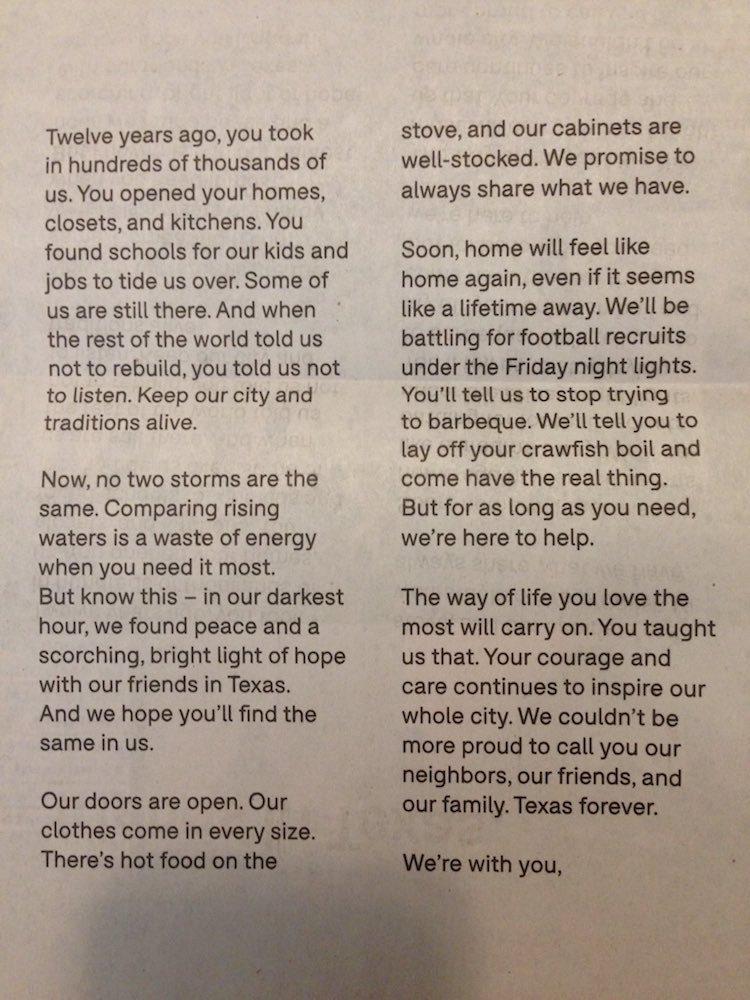 Shocking Before and After Images of New Jersey Coast

25 Most Haunting Photos from Hurricane Katrina