Interview: Artists Map Out the Environmental Impact of Fish Farming in Eye-Opening Mosaic 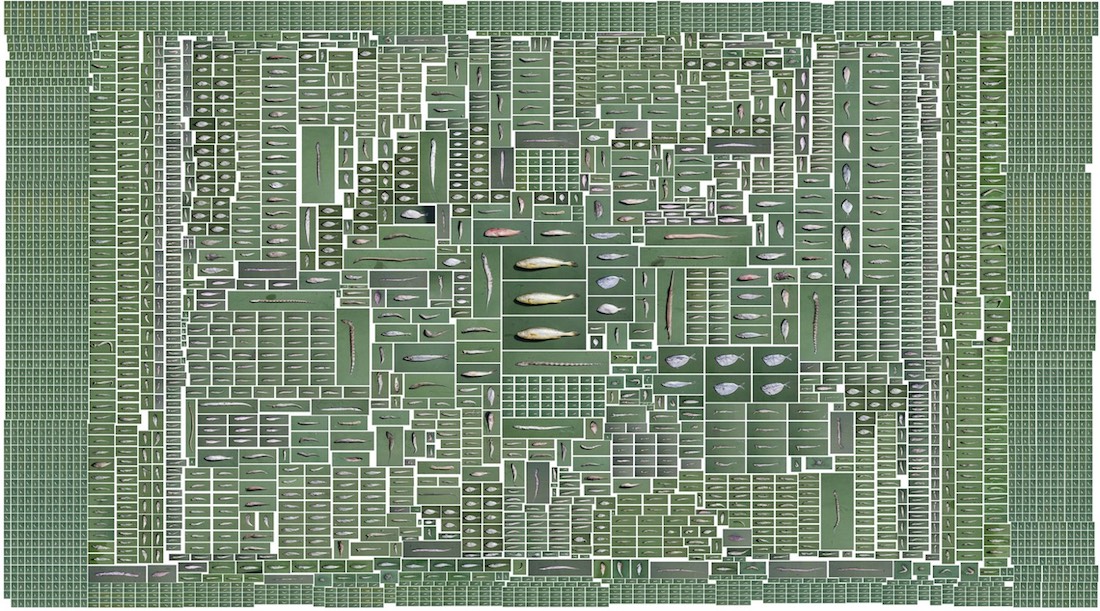 With a practice rooted in “statistical, mathematical, and computational techniques,” Stefen Chow and Huiyi Lin are no ordinary artists. Harnessing their respective skills as a photographer and market researcher, Chow and Lin use their craft to tackle some of society's most prevalent problems, like sustainability—a topic explored in their latest project, Equivalence – The Ecological Footprint of Fish.

This eye-opening piece traces the impact that farming large yellow croakers has on the environment. Why did Chow and Lin opt to use this species of marine fish as their case study and, consequently, the basis of their project? “The large yellow croaker is China’s most popular fish, and they used to be caught in the wild for generations,” the duo explains. “Overfishing coupled with a sharp rise in consumption in China has led to a near extinction of the large yellow croaker species in the wild.”

Ample large yellow croakers, however, can be found in farms across Fujian China, where they are fed fish that have been taken from nearby seas. Annually, 400,000 tons of wild small fish are required to sustain these Chinese farms, which, together, account for more than 60% of the world’s aquaculture output.

Fittingly, Chow and Lin have chosen to interpret this large-scale problem as a large-scale work of art. Featuring photographs of over 4,000 wild small fish surrounding the three large yellow croakers they will feed, The Ecological Footprint of Fish frames this phenomenon as a tessellated mosaic. By translating scientific and government-derived data into striking visuals, Chow and Lin hope to bring much-needed attention to a monumental problem.

We recently spoke to Stefen Chow about The Ecological Footprint of Fish. Read on for My Modern Met’s exclusive interview to find out more about this impactful piece and Chow and Lin's work as a whole.

Your work often deals with important topics like sustainability and poverty. What role do you think artists should play in addressing these issues?

Artists can take the role in raising questions, catalyzing conversations about these topics. Art can be emotive, informative yet cross genres and bring about meaningful dialogue. Our work has been shown in photo festivals, biennales, academic institutions, and the United Nations, and we see this as constructive, even if the tangibility cannot be measured. Art lives on, even when we don't, and I see that as rather important.

What initially inspired you to look deeper into the impact of farm fishing?

As an artist duo, we have been concerned about global tipping points for a while. At the beginning, we were focused on poverty and inequality issues, which we still are. However, we also started to look at other phenomena, and other issues came into our focus—pollution, consumption, geo politics, and so on.

We grew up and lived in metropolises all our life. Our relation with nature is distant, foreign, and altered. A lot of issues seem unquestionable until you start questioning them. Farm fishing is one of those. It seemed like a great idea to contain resources, impact in a controlled environment. Until you start looking deeper and probing assumptions. 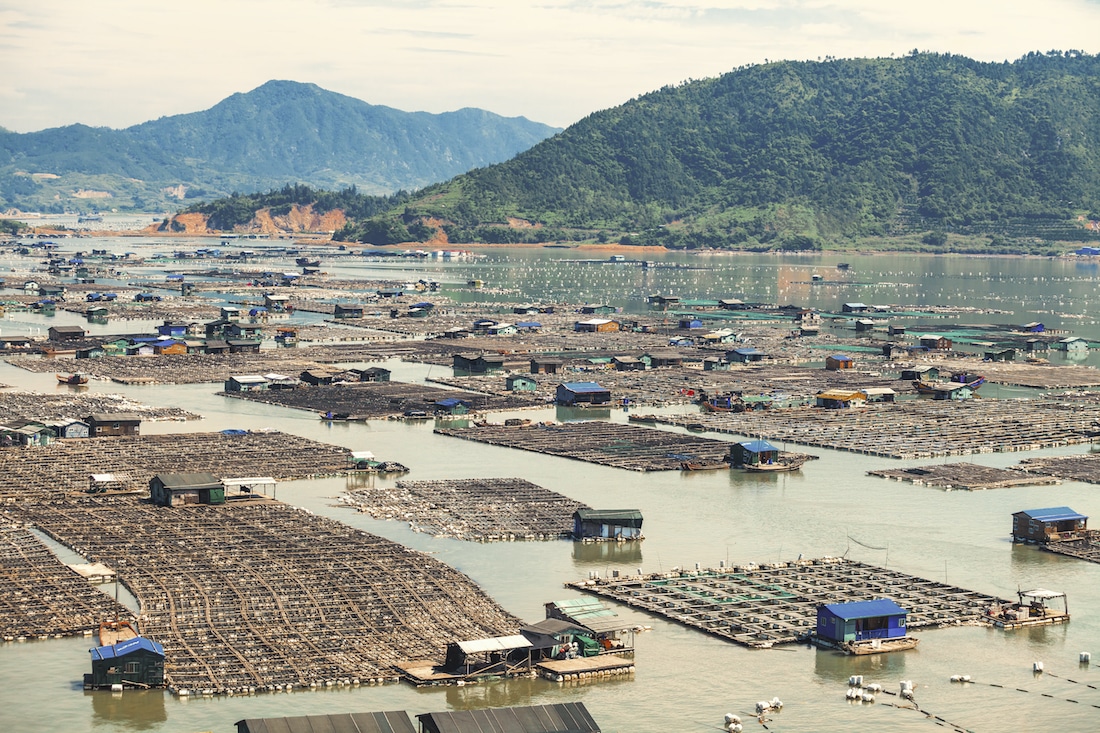 How long did it take you to conduct your research for Equivalence – The Ecological Footprint of Fish?

It took about 3 months, during which we had discussions, interviews with various experts and we also read through academic and general reports about farm fishing to get ourselves up to speed on the issue. We always feel that the research part comes first, or our resultant work would be fundamentally off-tangent. It was only after we have fully conducted our research that we started proposing how we might go about creating the work.

This work was commissioned by Greenpeace. How did this collaboration start?

They saw our work from past exhibitions and were fascinated with our methodology, especially since we combine statistical research with large scale visual representations. They came to us with concerns they had with farm fishing, and this was how the collaboration started. We were very glad this happened. For them, it was creating awareness, questions about the sustainability about farm fishing in China, and art is a vehicle in which the conversation can be advanced beyond merely presenting facts and statistics. In the end, the campaign was a success, the resultant visual representation along with the video reached millions and they also had the chance to sit down with local government officials to suggest solutions in the long run.

From a technical standpoint, how did you create the mosaic?

We rented a basketball court in a small town in Fujian, China, where it is in equal proximity to all the fishing ports where we were collecting the fish samples. I photographed each of the fishes individually, and we had about 6 staff on site to lay the fish out on the basket court, which has a green background. The collection of the fish took about 3 days, while the photography took place over 2 days. It was back-breaking work for all of us, but it was a great result. 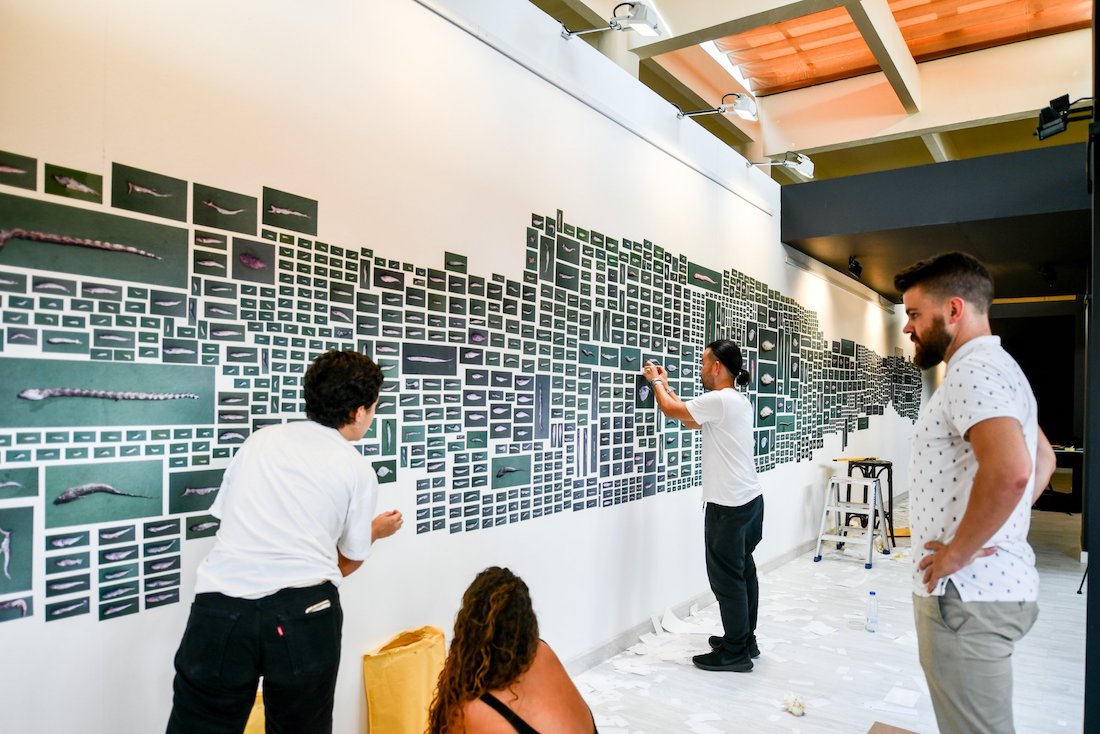 What changes do you hope to see in the future of farm fishing?

We certainly hope that farm fishing can be more sustainable from an ecological perspective, and we will also need to cut down on our consumption of meat in general. Environmental costs are rarely factored in the price of fish or most things we eat, and the earth and less developed communities are paying the eventual price. 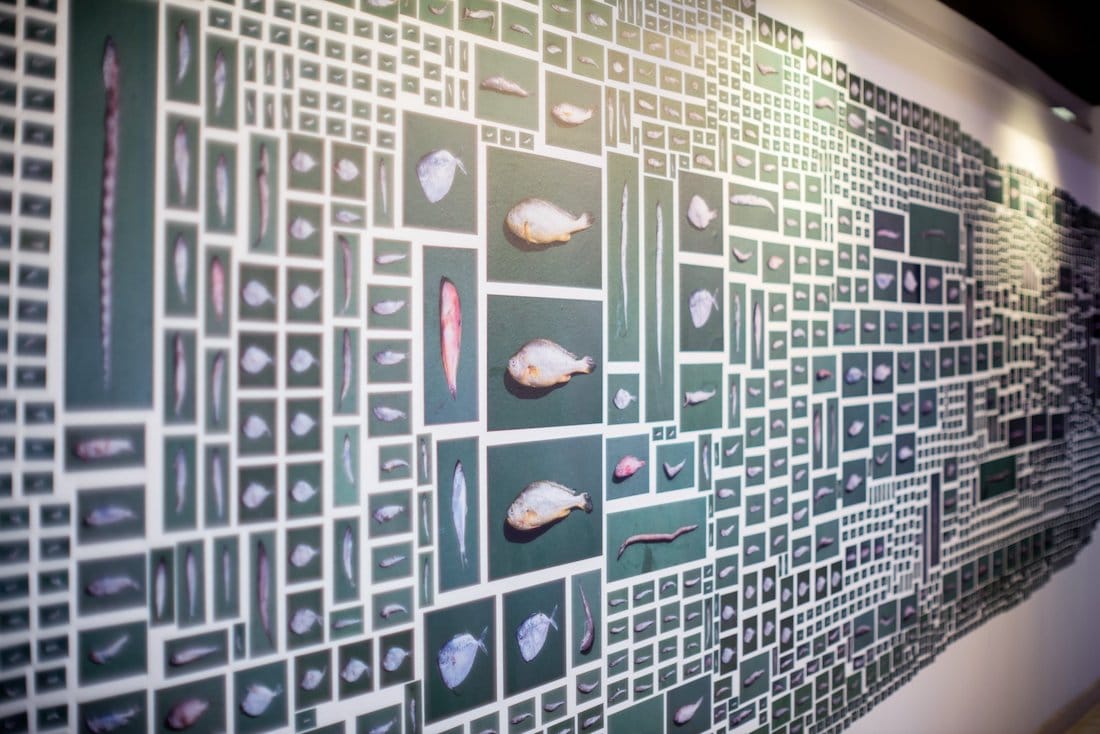 Do you have any other projects in the works?

Certainly. We are currently working on a project about population using 3D mapping and AI algorithm, and we are also doing research about the symbiotic relationship between religion and commerce. Stay tuned.

Stunning Winners of the 2018 Environmental Photographer of the Year Contest

Like environmental art? Share
Like My Modern Met on Facebook
Get Our Weekly Newsletter
Become a
My Modern Met Member
As a member, you'll join us in our effort to support the arts.
Become a Member
Explore member benefits