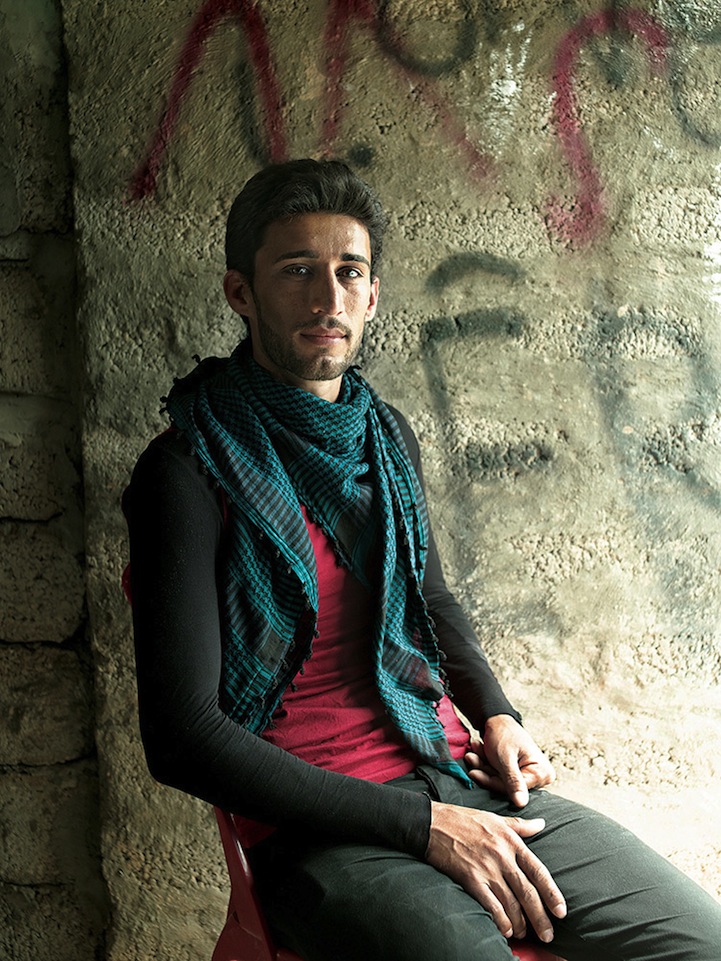 Syria's Lost Generation is a powerful portrait series by photographer Elena Dorfman that takes a look at Syrian teens who have been forced to live in refugee camps due to the state of their native country, currently amidst a civil war. The portraits, accompanied by brief descriptions about each photographed individual, provides insight into the lives of these displaced teens who represent a generation in their culture that feels like it's losing hope.

Dorfman spent six months covering the harrowing situations that Syrian refugees have endured during this time of crisis for the United Nations High Commissioner for Refugees (UNHCR), focusing her coverage on the plight of teenagers relocated to camps in Lebanon and Iragi Kurdistan. Adolescence is hard enough on its own, but these youths have the added obstacle of living and coming of age in less than desirable conditions with little to encourage their development.

The teenage refugees face difficulties on all fronts, whether you look at it from a social, economic, or personal standpoint. Ultimately, they're in an unfortunate position that has waned their ambitions for greater opportunities and any solid hope of returning to their home in Syria. They are left feeling lost both culturally and physically as displaced individuals in a foreign land.

Dorfman tells us that this photo project is a way to share the faces and stories of only a handful of the countless Syrians living in exile in an effort to bring awareness to their critical state and “help people outside of the region connect with the Syrian refugee crisis.” We were extremely lucky enough to ask the photographer a few questions about her series and personal experiences with the teens, which she thoughtfully answers, below.

Top photo: Fled Syria after taking photos of demonstrations and posting them online and seeing his friends get arrested for similar activities. Now lives in a small room with four friends–no job and unsure of what's next for him. 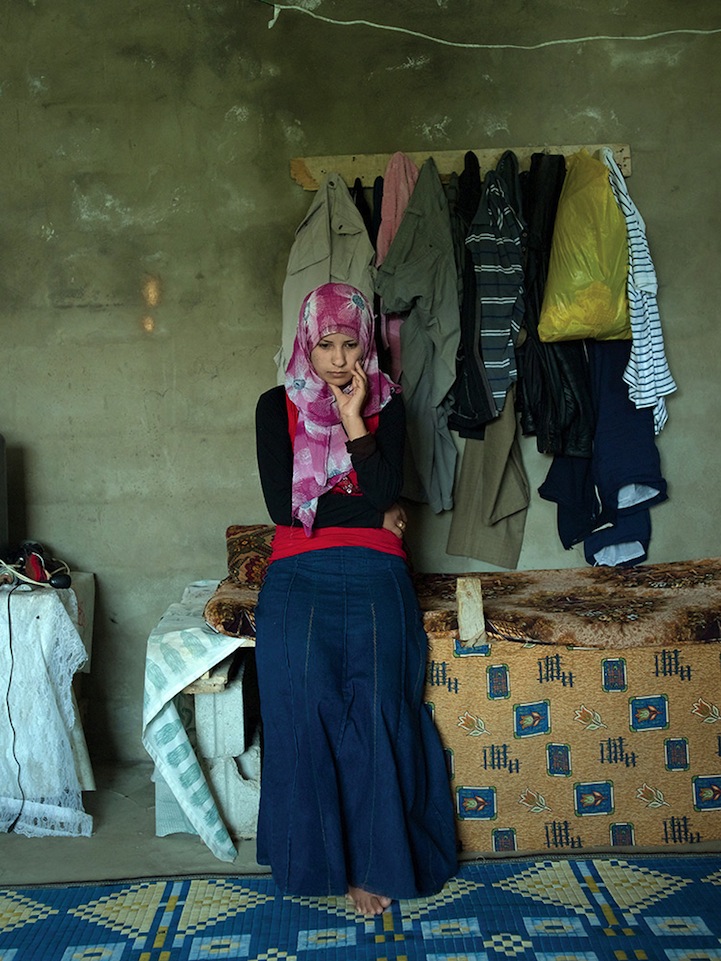 Iman, 19, Lebanon
Shares a single room with her extended family at a shelter that houses seven hundred refugees. Her husband is back in Syria. She is wearing the only clothes she owns and stays inside all day. 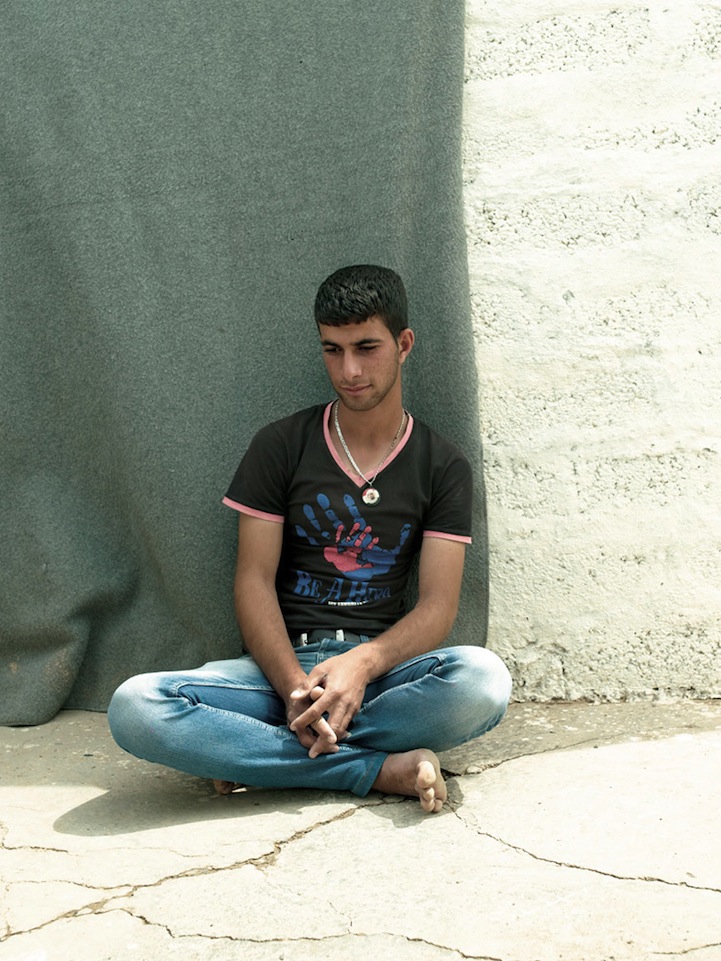 Abdallah, 18, Domiz refugee camp in Iraqi Kurdistan
Lives in a “singles” section (an area for men who arrive with no family). After taking part in demonstrations and refusing to join the Syrian army, he was forced into exile to avoid grave consequences. He had to leave his mother and sister in Syria whom he's had no contact with since his departure. 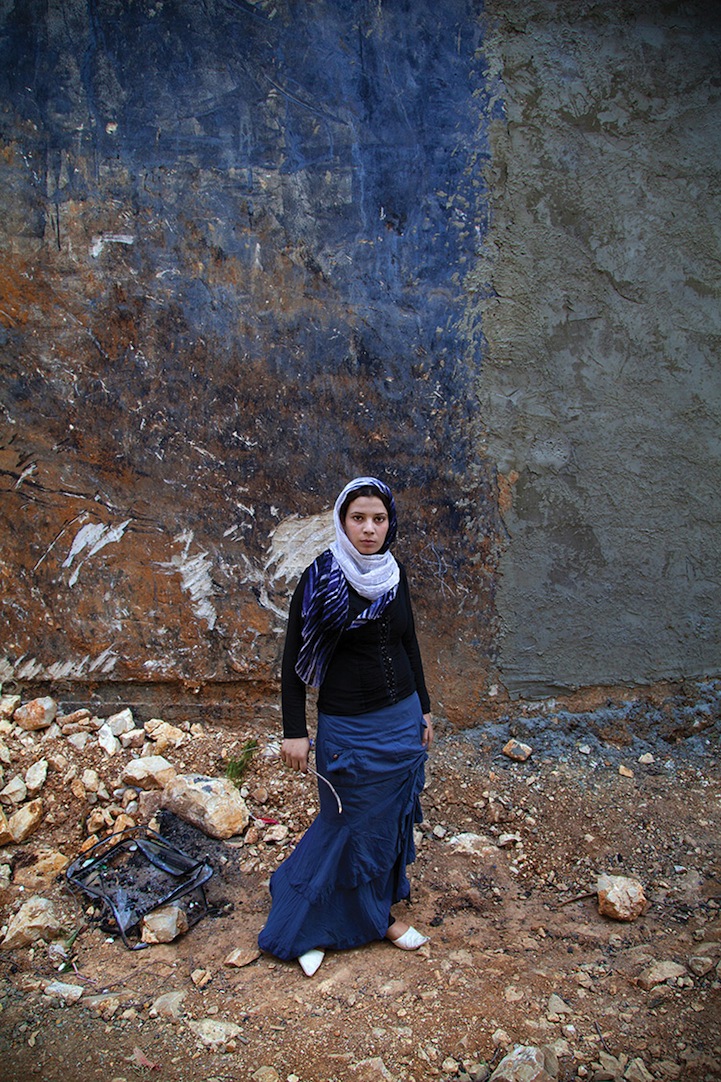 Bathoul, 18, Lebanon
Lives with her large family in a windowless cement shell on the side of the road; her home in Syria was destroyed. Had hopes of becoming an architect but now focuses on helping her mother and sister find food and clothing. 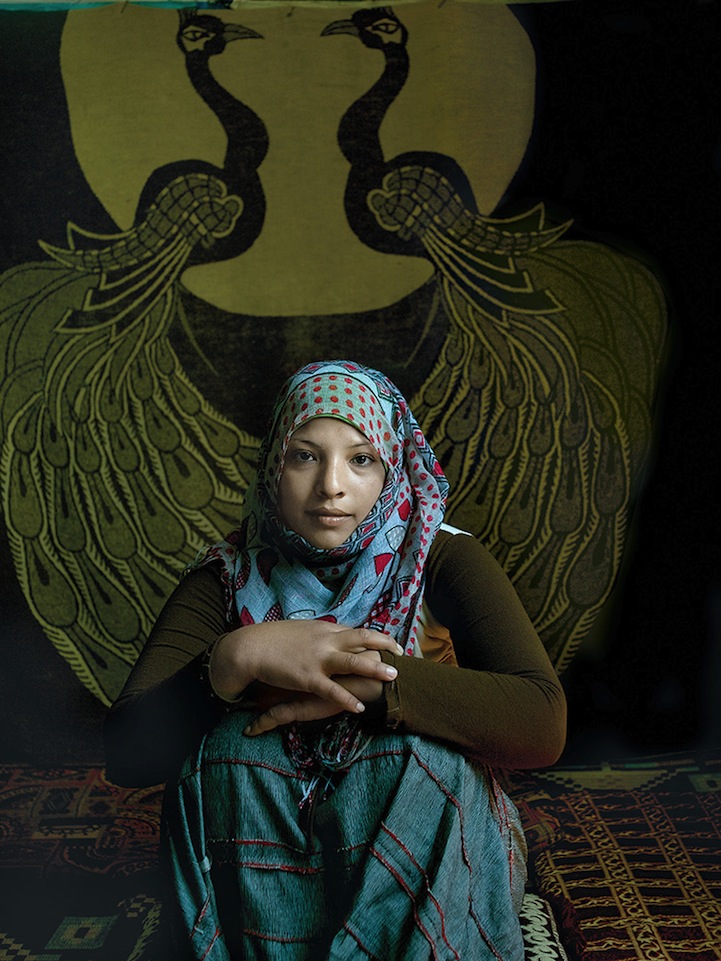 I'tmad, 17, Lebanon
Iman's younger sister. Also stays inside the camp most days and misses her old life filled with classmates and books. 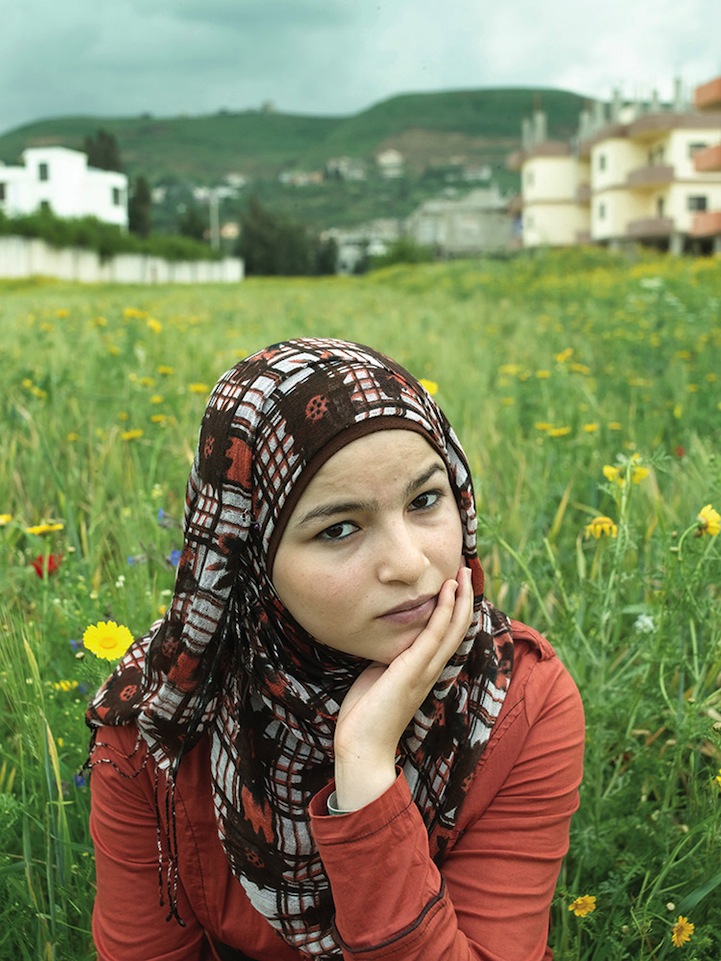 Dua'a, 17, northern Lebanon
Lives with her older brother. The rest of her family was unable to join her as the war intensified and became too dangerous. 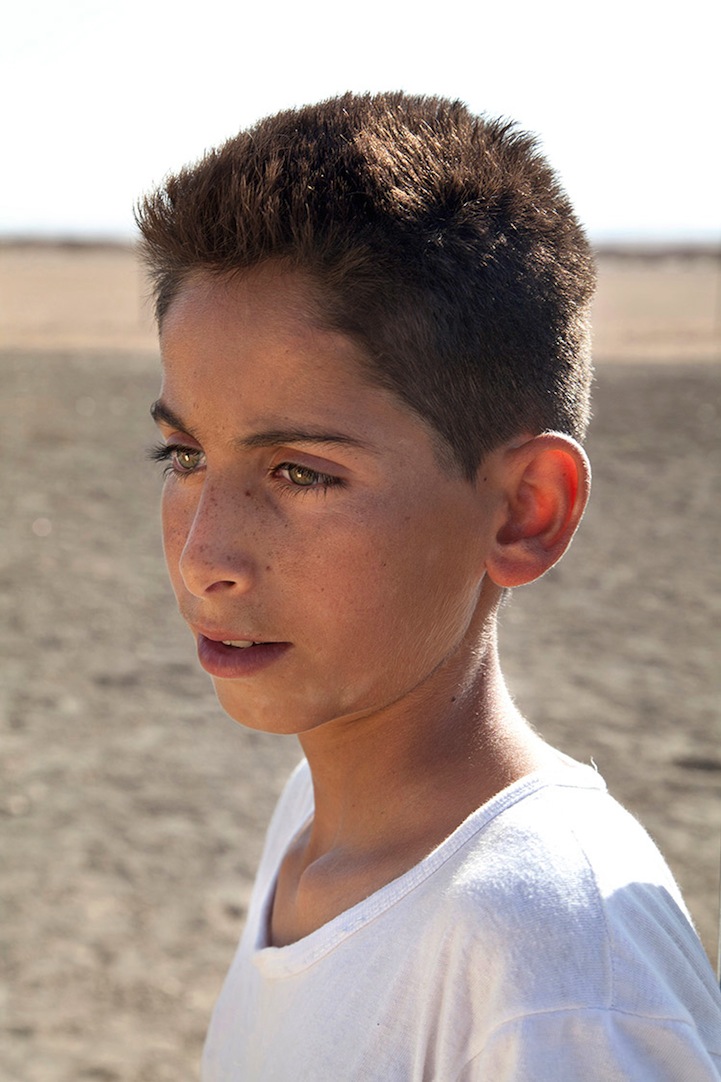 Ziad, 14, Za-atari refugee camp in Jordan
Lives with his family. Has hope that he can return to Syria one day and rebuild their country. 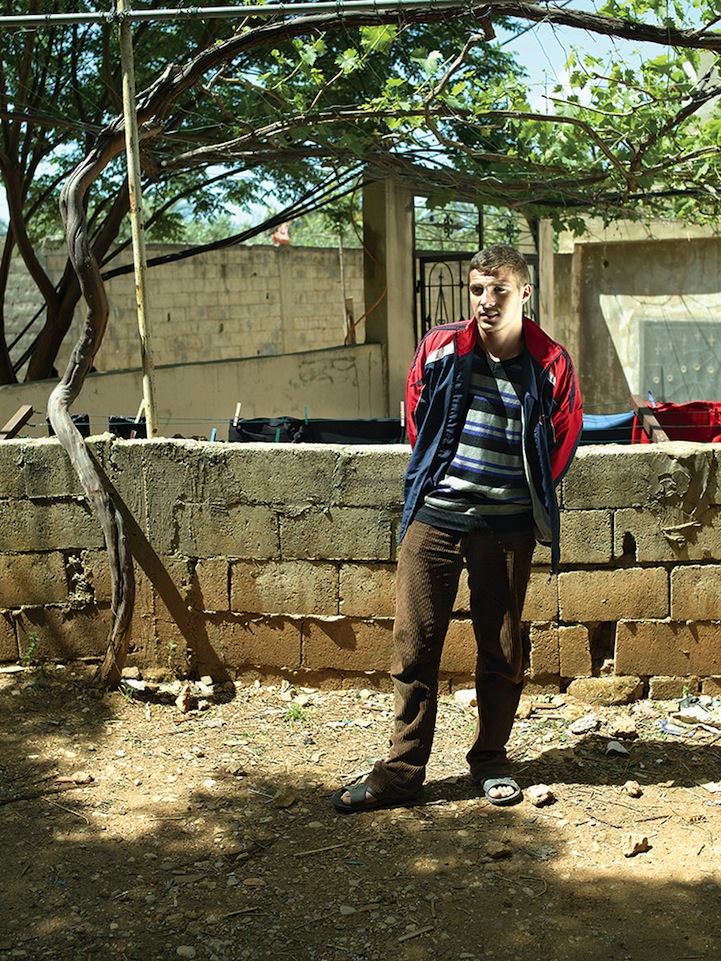 Youssef, 18, northern Lebanon
Lives with his own family and several other refugee families in cramped quarters that were once a barn. 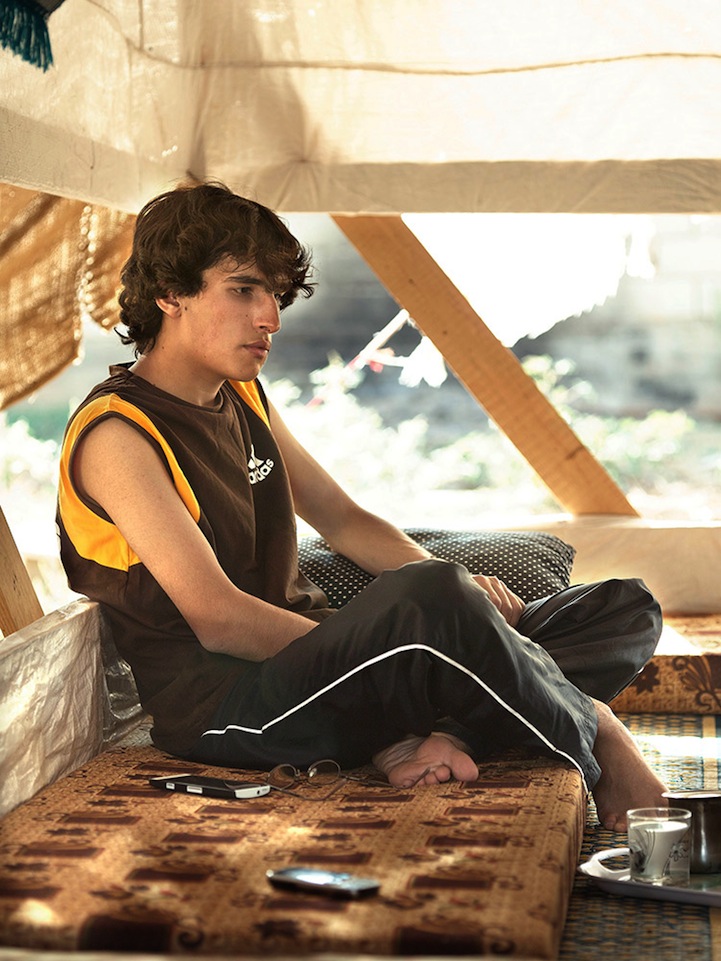 Hani, 19, Madjel Anjar, Lebanon
Lives in a dusty tented settlement. Misses everything about his old life and says that he may have lost his country but he has not lost his mind, heart, or spirit. 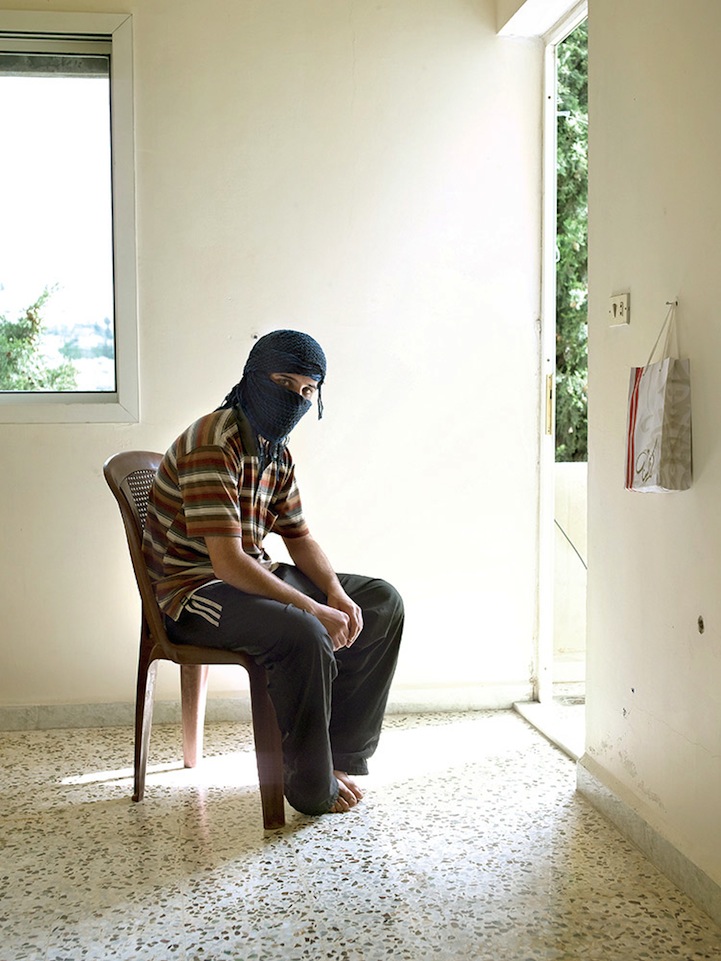 Tarak, 18, northern Lebanon
Lives with his mother and siblings; his father was killed. Covers his face from fear of being recognized by Syrian officials.

What drew you to the subject of teens?
I was drawn to the teenagers because of their specific place in this time: not only are they verging on adulthood and all that it implies, but they are also doing this in the context of a civil war. All of the teenagers I met and photographed had lost their homes; a family member was either dead or missing; they were out of school and had no idea if they could or would return to their studies. Most had no idea if their friends were dead or alive. These young adults are dealing with complicated and emotional issues and have been forced to grow up very, very fast.

There have been a few generations throughout history that have been referred to as a “Lost Generation” (like Japan's adolescents and young adults in the 90s during their national depression). Could you please explain how this title applies to today's Syrian teens?
These teens are literally lost. They have lost their homes, their grounding, their friends, parents and siblings in some cases, and their country as they knew it. They are suspended in time. For the most part, they have lost hope, community, and any ability to see beyond the present moment. Their future is entirely unclear.

What was the general mood/attitude of the youths you approached?
Their moods were very low, in general, depending on the gravity of their situation. In some cases the kids were suicidal, although as my six months in the region came to an end, I began to notice that they were more inclined to making life work in their host country instead of believing they would return to Syria anytime soon.

What do you hope viewers take away from these images?
My first hope is that viewers look at the pictures and, just for a moment, try to get a sense of what it would be like to lose everything. But really, I hope people will give. They can donate to the UNHCR or another refugee agency. With so many refugees in need (nearly one million in Lebanon alone) the relief agencies are running out of money to feed, house, and care for these kids and their families. In the end, giving is what can make a difference.