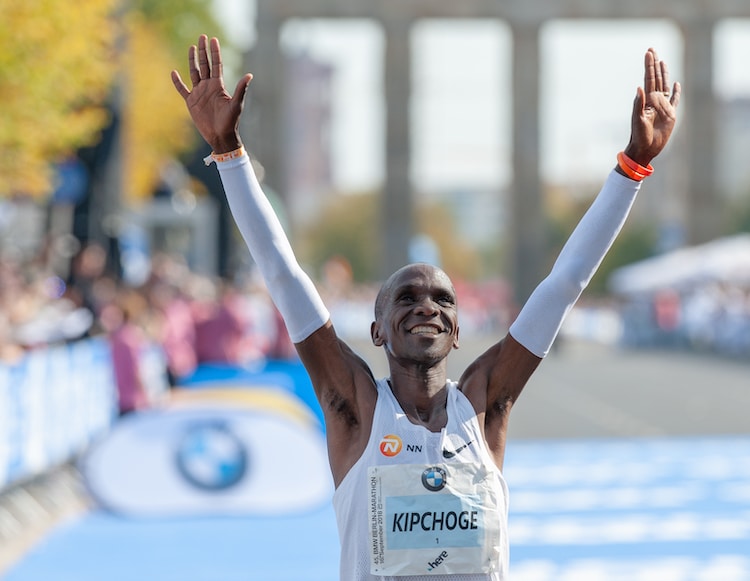 Runner Eliud Kipchoge made history on October 12, 2019, for being the first person to ever run a marathon in under two hours. He finished the course with seconds to spare; a roaring crowd congratulated him as he crossed the finish line at 1:59:40.

In a fascinating presentation from YouTuber Mike Boyd, he breaks down all that went into the success of the history-making 26.2-mile run. Boyd examines Kipchoge’s months of training that helped him prepare for the event. It turns out that the athlete and his training partners ran a staggering 140 miles a week, which is the equivalent of five marathons. They completed the miles on hard-packed dirt roads in Kenya at a high elevation, which helped Kipchoge cope with lower oxygen levels and made it easier for him to run at Vienna’s lower altitude.

Boyd demonstrates, on his own treadmill, just how fast Kipchoge had to move over this period of time. Kipchoge had to run 13.1 miles per hour, which would be a hard sprint for an average runner. Consistency was key—even a few seconds added on per mile could've thrown off the entire run and caused him to finish in over two hours. With such little chance for error, Kipchoge had 41 pacers (many were Olympic athletes) running alongside him as well as an electric pace car that helped him maintain accuracy.

As Kipchoge has now broken the barrier for the 26.2 run, it will surely usher in more athletes to do the same. After all, the sub-four-minute-mile was once seen as an impossible task. But since Roger Bannister completed a mile in 3 minutes and 59.4 seconds in 1954, over 1,400 people have done the same (10 of them are in high school).

Take some time and watch Boyd’s video to fully appreciate Kipchoge’s abilities and the team that helped him achieve this awe-inspiring record.

YouTuber Mike Boyd created a fascinating video that breaks down all that went into the success of Eliud Kipchoge's ground-breaking sub-two-hour marathon run.