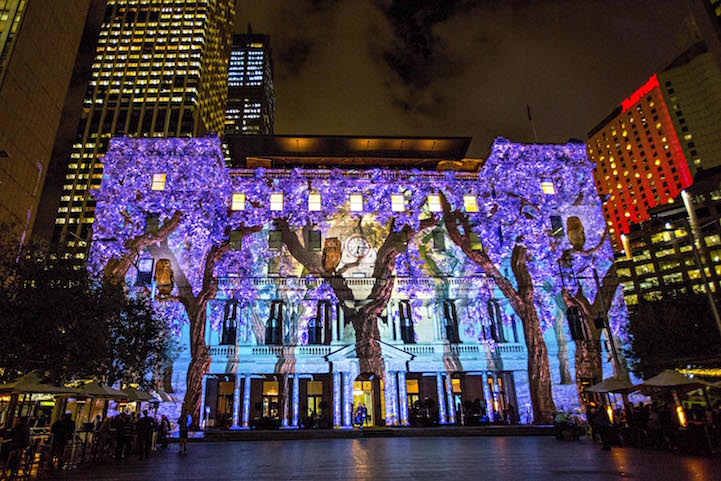 The amazing light festival in Australia, Vivid Sydney, just started today and one of their standout installations is this new projection of trees and flowers blooming on the iconic Customs House. The 8-minute show mixes both familiar and unfamiliar sights of Sydney's natural environment to create a continually evolving blossoming world. The artwork was created to fit specifically to the architectural form of the building. The graphics are color-bursting images of blue and green butterflies, purple leaves and tiny red and white spotted mushrooms on sinuous trees. Spinifex Group, a company that specializes in immersive media experiences, is behind this work.

Here's what they told us about the meaning behind the show. “Beginning in Jurassic times, we have a moment when the dry earth gets cracked, revealing a waterfall scene filled with cockatoos. They fly us upwards as frangipani flowers blossom on either side of dolphins leaping out of the water. Next, the building transforms into a green walled house where a janitor battles a local pest, an oversized snail.

“Filling with water, we see bright coral and great white shark scare away fish, cracking the glass. Another local Sydney pest, the cockroach, scuttles over the building momentarily before a vine bursts through. This is followed by a large waratah shrub swarmed by bees, ladybirds and beetles. (Watch out for the sneaky stick insect!) Next, butterflies take us through to jacarandas with hidden owls, before jellyfish fill the screen. Then, in the final magical enchanted scene, some hidden gnomes frantically collect acorns before a gray-headed flying fox swoops down, taking the audience up and into the clouds. We end with a gnome flying away in a contraption that transforms into a rocket, blasting into the distance leaving fireworks.

“People seem to be amused by the battle against the giant snail, entertained by the gnomes and like seeing the shark ‘crack the glass'. We went with a theme focusing on nature as there seems to be a big push, at the moment, for Sydney to become a greener place, and more environmentally aware.”

You can see this stunning installation on the Customs House in Circular Quay. It will be on from 6pm to midnight, every night from now till the end of the festival or June 8. 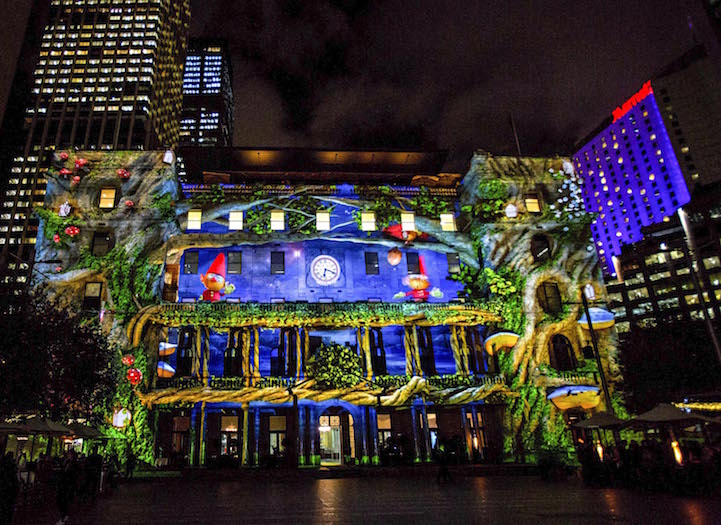 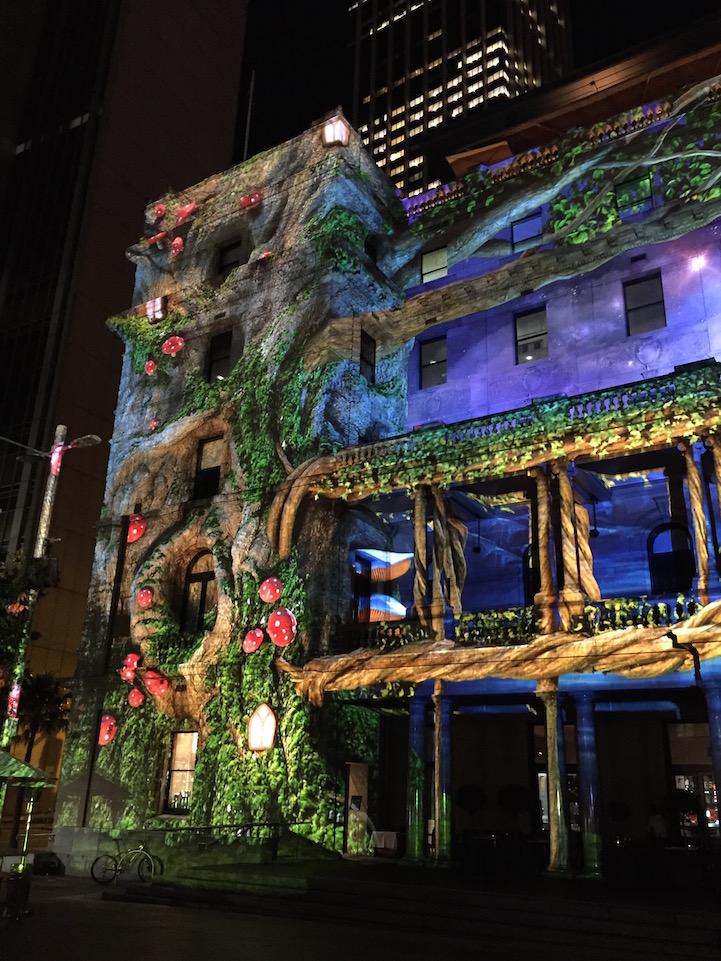 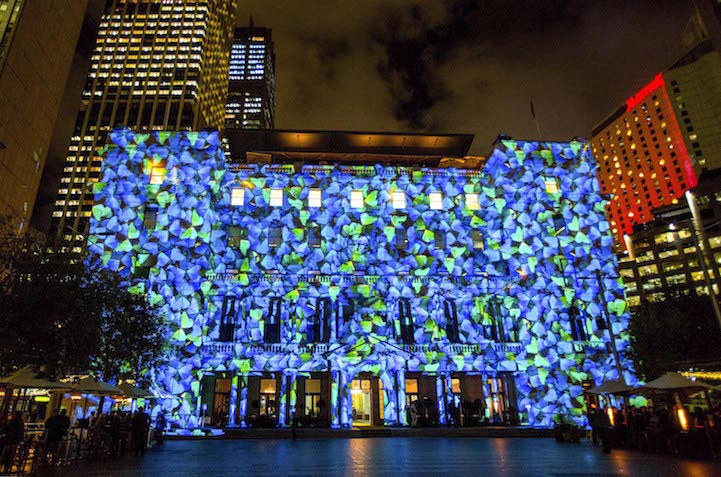 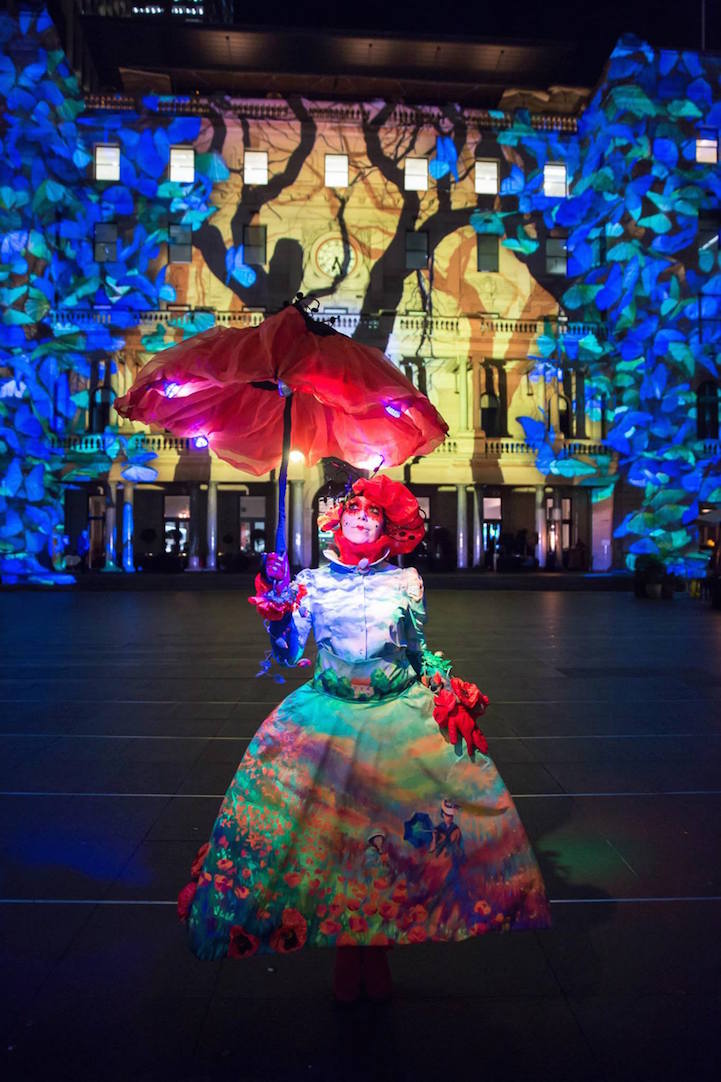