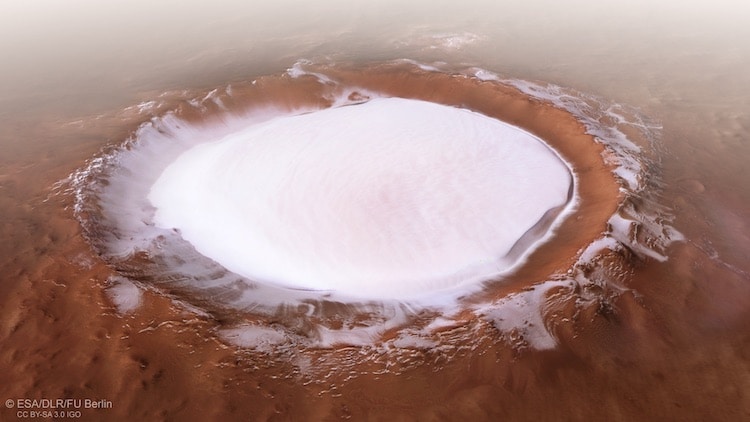 In a continuing quest to learn more about Mars, the European Space Agency (ESA) has recently released a pair of photos that provide us with more insight into the Red Planet. The two images showcase the massive Korolev crater that measures 51 miles (83 kilometers) across and has a 1.1 mile (1.8 kilometers) thick mound of water ice that stays frozen all year round. ESA estimates that the hole contains 528 cubic miles (2,200 cubic kilometers) of water ice. For context, this is as much as Great Bear Lake in northern Canada, which is one of the largest lakes in the world.

Although these images appear seamless, they are the result of composite photographs captured by the Mars Express High-Resolution Stereo Camera (HRSC). In April 2018, the HRSC began its series of orbits around the planet; during each trip, it snapped a strip of imagery. The individual pieces were later combined to create two views: one at an angle and another from straight above.

The incredible images show a solid white pool that’s set below a deep lip. So, how does it stay solid? “This ever-icy presence is due to an interesting phenomenon known as a ‘cold trap’, which occurs as the name suggests,” ESA writes in a press release. “The crater’s floor is deep, lying some two kilometers (1.25 miles) vertically beneath its rim. The very deepest parts of Korolev crater, those containing ice, act as a natural cold trap: the air moving over the deposit of ice cools down and sinks, creating a layer of cold air that sits directly above the ice itself.” This layer then “behaves like a shield” that allows the ice to remain stable—it doesn’t heat up nor does it disappear.

The Mars Express started its mission on June 2, 2003. It took about six months to reach the planet, where it entered its orbit on December 25, 2003. The new images of Korolev crater are a fitting milestone for the long and successful journey. 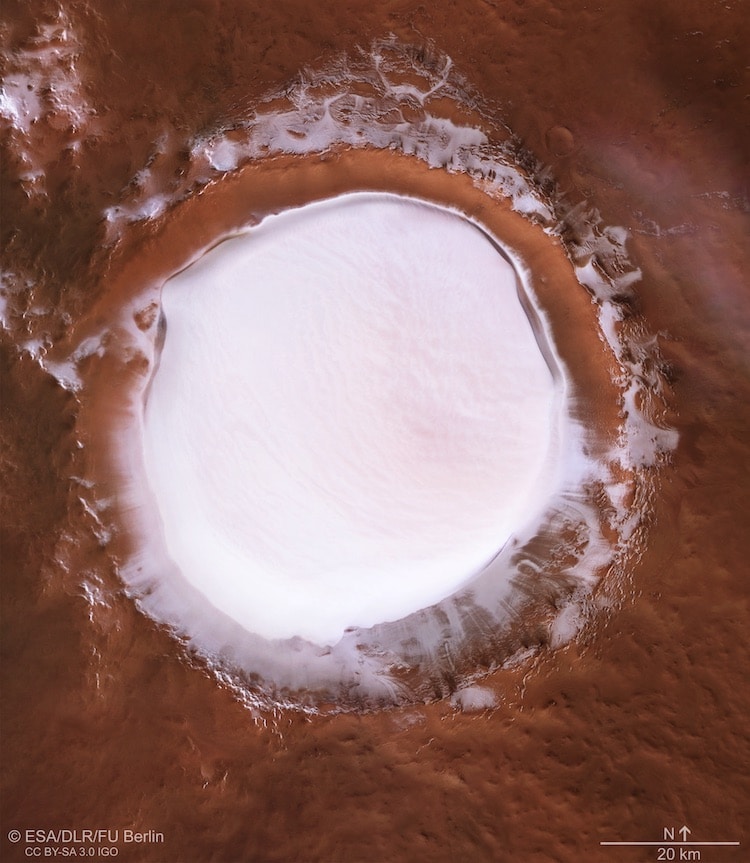 The crater is as big as some of the largest lakes on Earth.

For those of you asking – yes it is water ice.