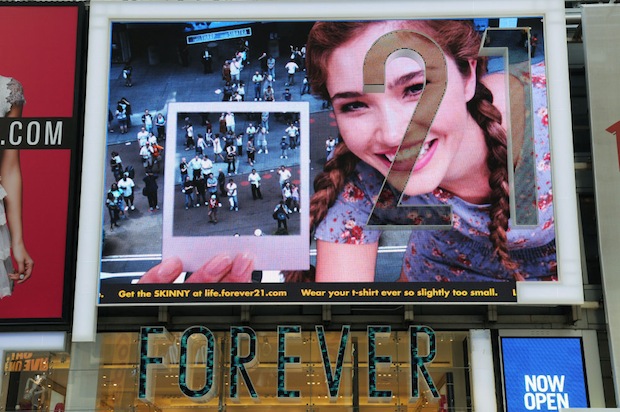 Anytime we see some new technology being used by advertisers to actively engage their consumers we're all over it. That's why this new Times Square plasma-screen billboard has caught our attention. Designed by interactive agency Space150 for Forever 21, the billboard features a lovely looking model walking in front of the crowd. The model leans over, plucks a lucky person out of the crowd and then tosses them, kisses them or drops them in her bag. It's attracting large crowds at Times Square because, really, who doesn't want to be a part of the experience? So how does it work? There's a high def camera that captures the crowd and then software that picks up individuals, just like government or surveillance jobs. Coolest part? If you carry a yellow Forever 21 bag, you're more likely to get picked out by the gigantic model. Now have a look.

No doubt that this was inspired by Chris O'Shea London billboard London, called Hand From Above. If you're in the Big Apple, make sure to check it out! via FastCompany and Digital Buzz