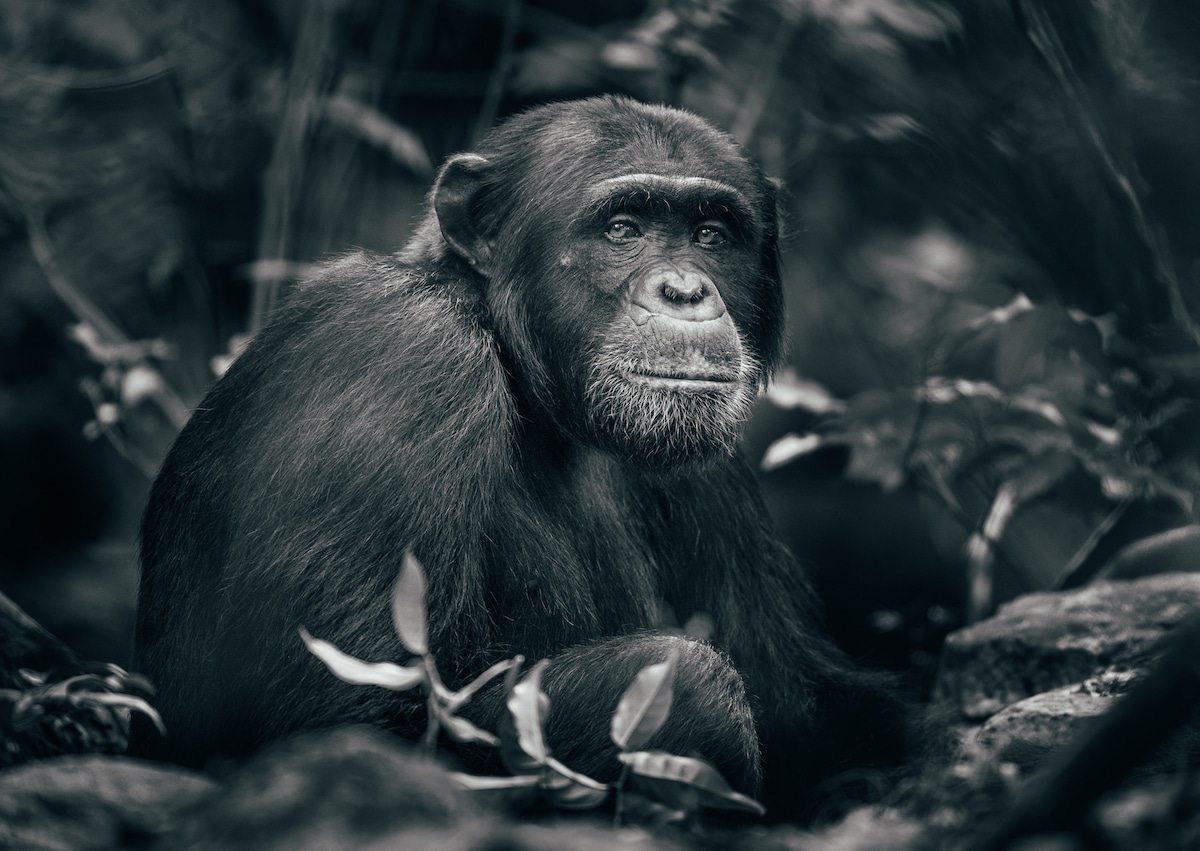 Wildlife photographer George Turner recently returned from Tanzania, where he was blessed with the opportunity to photograph some special chimpanzees on Rubondo Island. A shining example of animal conservation, the Rubondo Island chimpanzee project dates back to the 1960s, when a German conservationist named Bernhard Grzimek made it his mission to release zoo animals back into the wild.

From 1966 to 1969, Professor Grzimek brought 16 chimpanzees rescued from European zoos back to Africa, releasing them into their natural habitat. Now, from this initial starter colony, there are over 35 chimpanzees that inhabit Rubondo Island. With no prior rehabilitation or training, the founders of the colony were able to build their own shelter and forage for food in the wild after just a year, with each successive generation easily settling into their instinctual behaviors.

After 5 days of travel and a 60-mile hike, Turner had 3 hours to take in these magnificent, powerful animals. His trip was part of a chimp habituation experience run in cooperation with the Tanzania National Parks and eco-tourism company Asilia Africa, which allows the public to become part of the scientific project. Currently, the Rubondo Island chimpanzees are split into distinct groups on the north and south sides of the island. The northern group is part of the habituation project, where a human presence is slowly introduced over time and in a way that doesn't interfere in their natural behaviors. 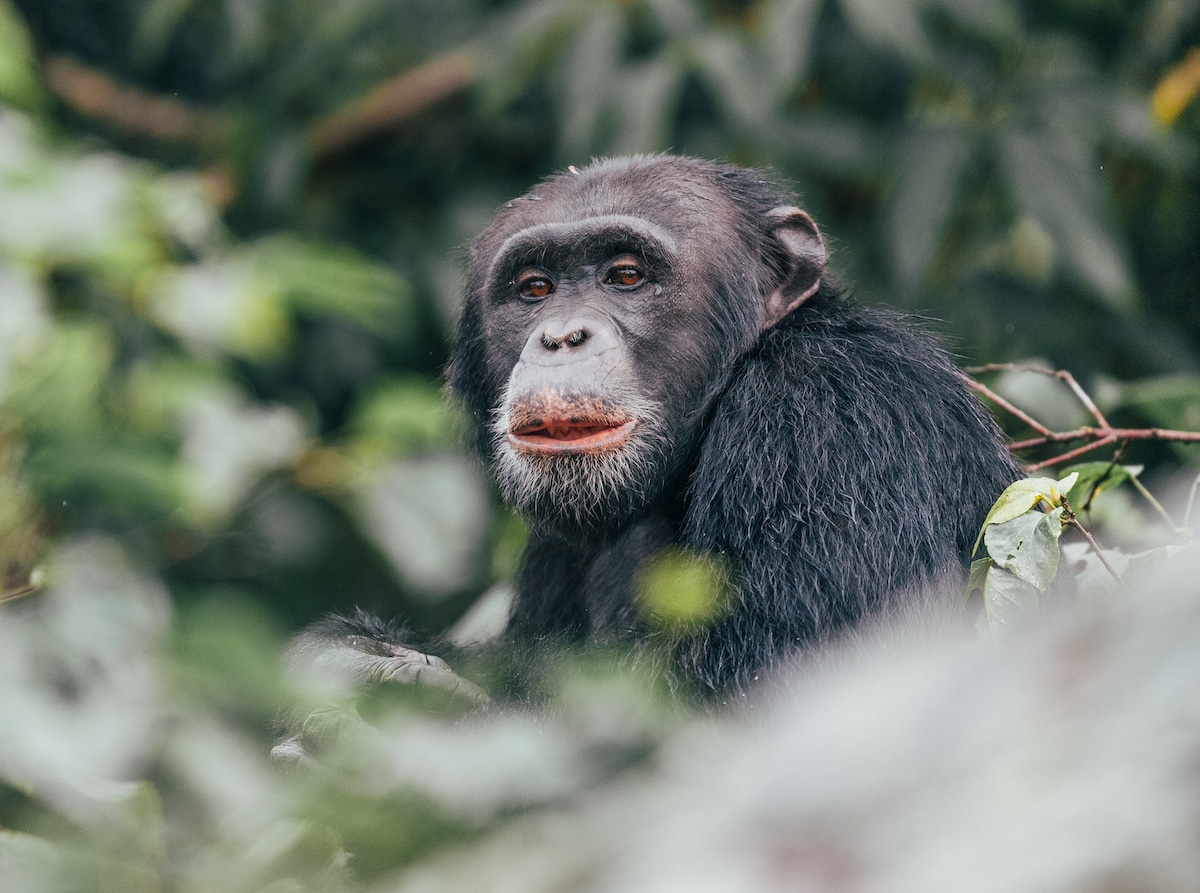 Turner's trip was an experience he'll never forget, his patience rewarded with some incredibly emotional moments. “The first encounter lasted well over an hour, with the alpha male greeting us and ensuring we were no threat,” Turner tells My Modern Met. “His stare is like nothing I've ever experienced. When he looked toward us, he was looking at us, as people. It was clear he was studying our faces, our behaviors, our every movement.”

The intense gaze of the alpha male was constrasted by the sighting of a female with a small baby, which was also a first sighting for Turner's guides, making everyone emotional. Continuing to track the chimpanzees, Turner was rewarded with two hours of observation time while the chimps slept peacefully in the bush. It was the perfect moment for him to get a prized photograph, but then something even better happened.

“Finally, just as I thought I'd not get the ‘clear' shot I'd wanted, the alpha male once again sought me out. Just 50 feet away, he sat calmly and looked at me. I've never felt so small in my life. After I'd taken the image, I stared cooly back and locked eyes. Even now, I get shivers up my spine recalling the moment.”

For Turner, his trip to Rubondo Island wasn't only an opportunity to photograph these incredible chimpanzees. It was also a way to see how animal conservation and eco-tourism can co-exist and, if done correctly, they can help funnel much needed funds into projects that will help more species in decline grow their populations. 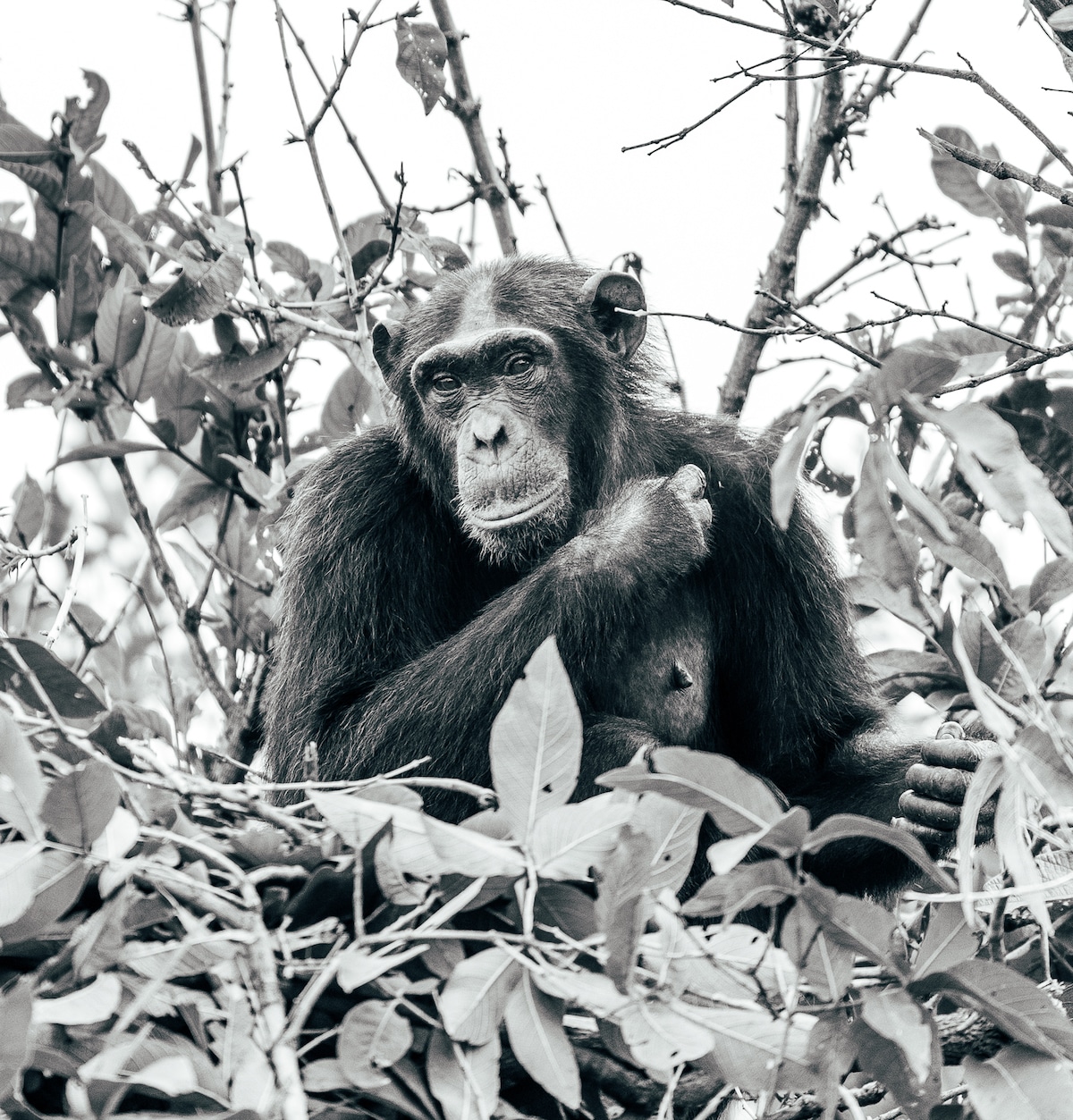 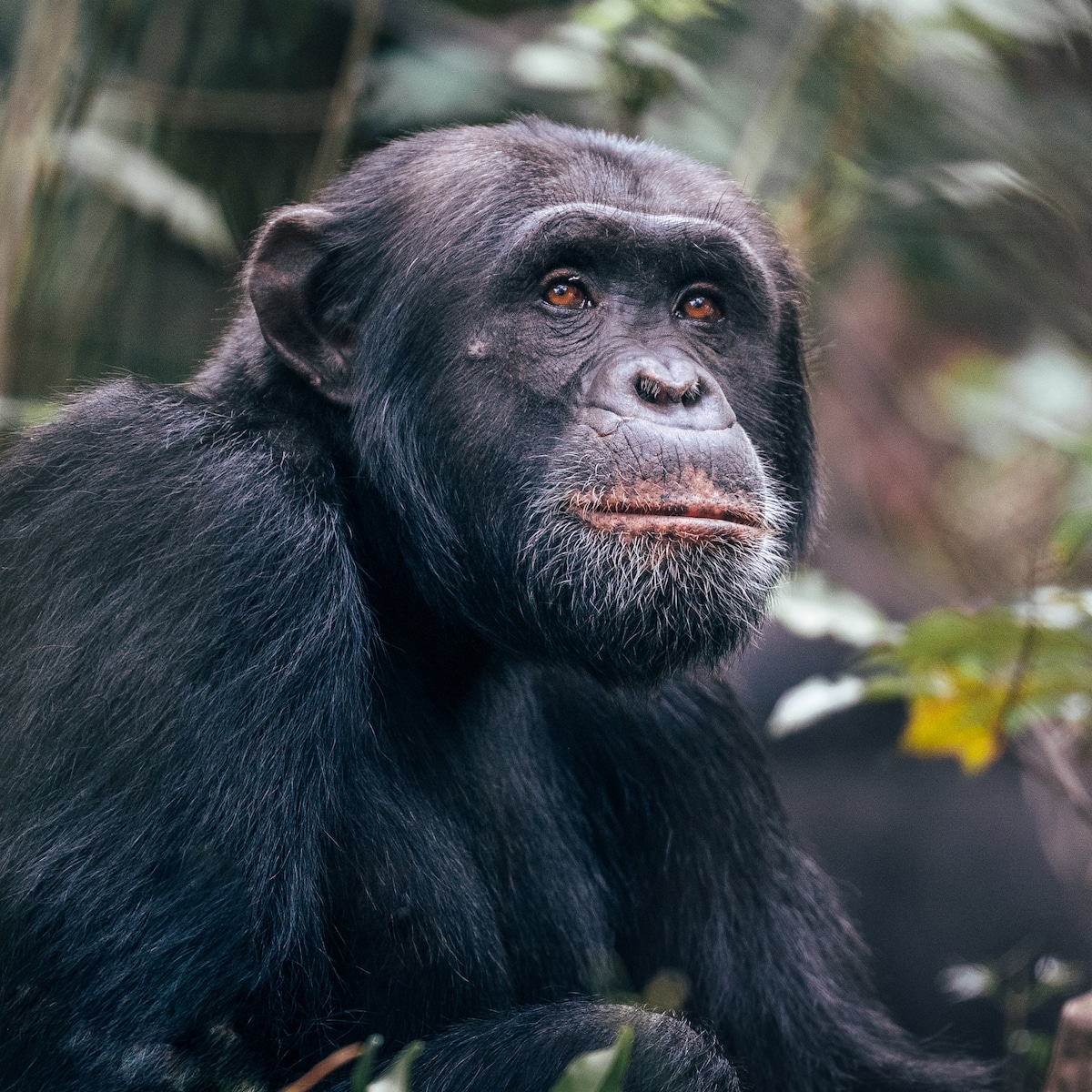 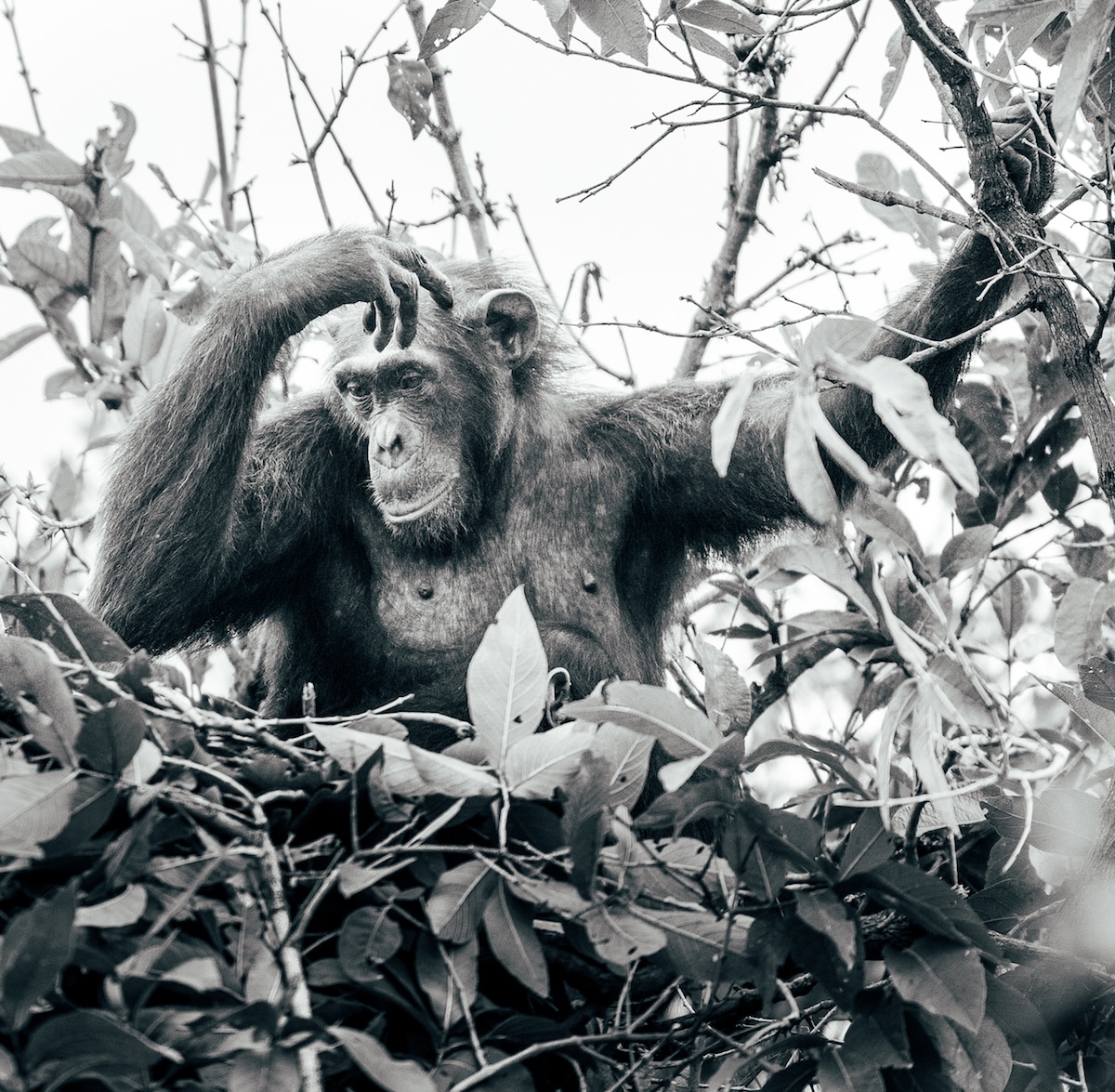 Would you sign up to spend time with these chimpanzees? Share
Like My Modern Met on Facebook
Get Our Weekly Newsletter
Become a
My Modern Met Member
As a member, you'll join us in our effort to support the arts.
Become a Member
Explore member benefits