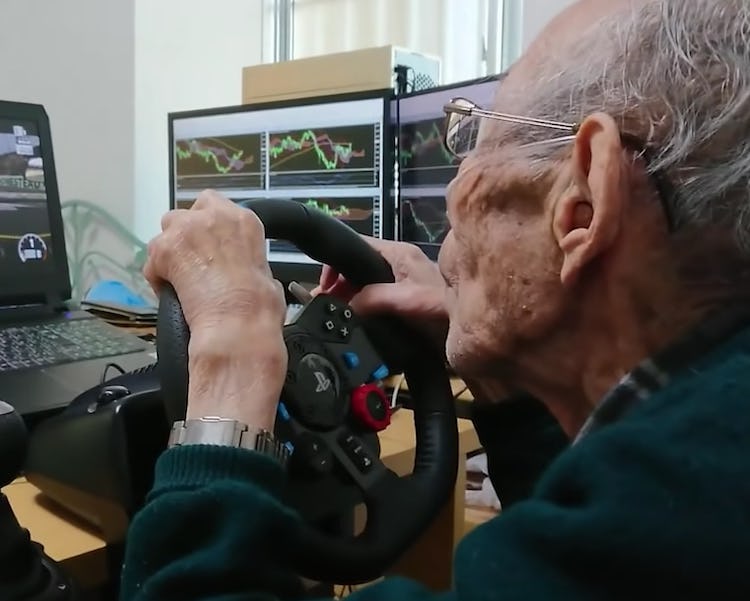 Do you remember your first car? Many people who drive say they fell in love with their first set of wheels. And even if it wasn’t the fastest or shiniest of cars, it will always have a special place in their hearts. One person who can relate is a 93-year-old Japanese grandpa who recently had the privilege of “driving” one of his old cars again in a racing game simulation.

Since the senior citizen is too old to drive for real on the road, his grandson (Olivin Corp. on YouTube) set up the Gran Turismo Sport computer game on his laptop and filmed his grandpa using the PlayStation steering wheel. The adorable man is captured happily driving an old Mazda Savanna RX-7—the same car he drove 30 years ago—along the simulated racetrack.

The racing grandpa is totally engrossed in the game, and he’s actually pretty skilled at video game driving. This is no surprise though—apparently he worked with cars for decades. During the 1960s, he worked as a taxi cab driver in Tokyo. And from the 1970s through the 1990s, he was a dump truck driver. He’s driven various classic Japanese domestic models throughout his life, and he seems more than excited to get “behind the wheel” again.

Watch the 93-year-old play racing games below. Look how happy he is!

This 93-year-old Japanese grandpa recently got to “drive” one of his old cars again in a racing game simulation.

It seems as though he's now totally addicted to playing the Gran Turismo Sport racing game!

All images via Olivin Corp.

25 Gifts Guaranteed to Give Grandpa a Great Father’s Day