Photographer Captures a Rainbow and Lightning Bolt in One Incredible Shot 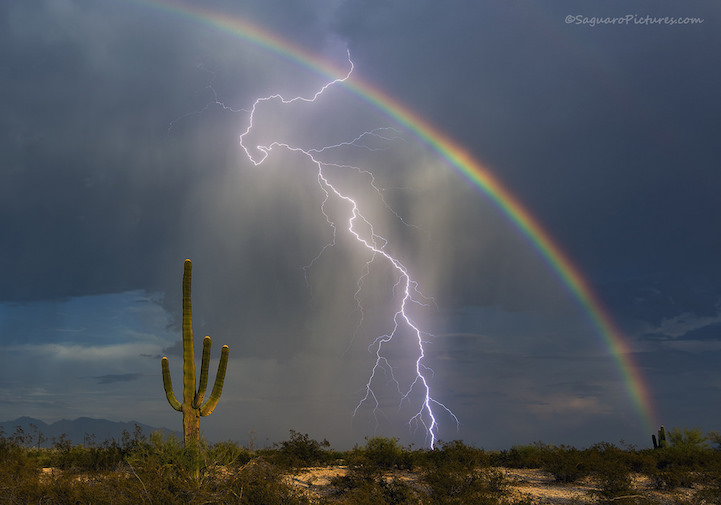 Arizona-based photographer Greg McCown recently captured the shot of a lifetime. Since picking up the hobby in 2004, McCown has been snapping photos of landscapes, often chasing storms. On a recent excursion, he had been shooting with friends near Marana, Arizona and got caught in a heavy downpour. After the rain had mostly subsided, he noticed that a rainbow had formed. McCown began driving towards it and found a clear scene free of power lines and other distractions. It's then that he took this stunning photo, capturing both a rainbow and bolt of lightning in the same frame.

Though McCown frequently photographs lightning, he usually takes them in the evening. However, this picture was captured in the afternoon, a time of day that doesn't normally offer ideal conditions for lightning photography. McCown explains to Weather.com, “The combination of having a rainbow, a lightning bolt that is powerful enough to really stand out in the daytime and composed perfectly with a saguaro has never happened for me before.” The special image was one that McCown had been trying to photograph for over seven years. “I've seen similar things happen only a few times in my life while actively looking for it, so to catch it with the camera was nothing short of awesome,” he told Huffington Post. This image is the perfect example of being in the right place at the right time.

McCown is currently selling prints of this incredible photo on his website.