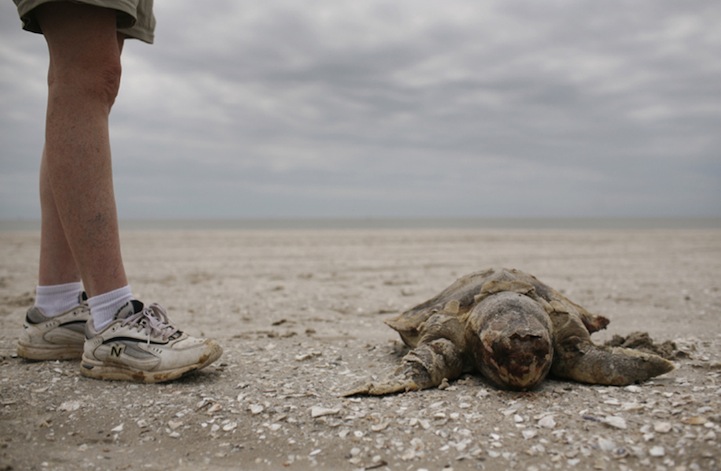 The Gulf of Mexico oil spill is an ongoing massive disaster. “Worst case scenarios almost never happen,” said Professor Robert Thomas, of New Orleans' Loyola University. “In this case, almost everyone I have known with technical knowledge of oil spills – people who have worked in the industry 30, 40 years – say it is upon us. Others talk of a “Gulf Coast Chernobyl”. (check out pics at The Frame) During these very two weeks, 25 million songbirds can cross the Gulf each day, mostly making their first landfall in the wetlands. Worse, this is the most vital season for the Gulf's fisheries, which also largely depend on them. Oysters have just started to reproduce, speckled brown trout have started spawning, shrimp have just begun to grow, to name but a few. Nine out of 10 of all the region's marine species rely on wetlands at some point in their life cycle, and these are mainly in Louisiana. The state produces more fish and seafood than anywhere in the US, outside Alaska. On Sunday its government banned fishing in the areas affected by the slick, and no one knows when it will resume. Some local shrimpers are gloomily predicting that it will be seven years before they can set to sea again; others that they will be out of business long before then. And there is an even worse prospect – that the wetlands, 40 per cent of the US total, may perish altogether if the slick gets really big. The concern now is that grasses that hold the whole system together could be smothered by the oil and die: without them all that would remain is mud, to be washed away within a year. And the wetlands are not just vital for fish and fowl, but provide a vital buffer against storms and hurricanes: if they had been healthier, it is accepted, Katrina would probably have been less damaging. Gulf of Mexico Oil Spill – The Frame source: telegraph