Learn About the Hope Diamond, A Stunning Blue Stone Some Say Is Cursed 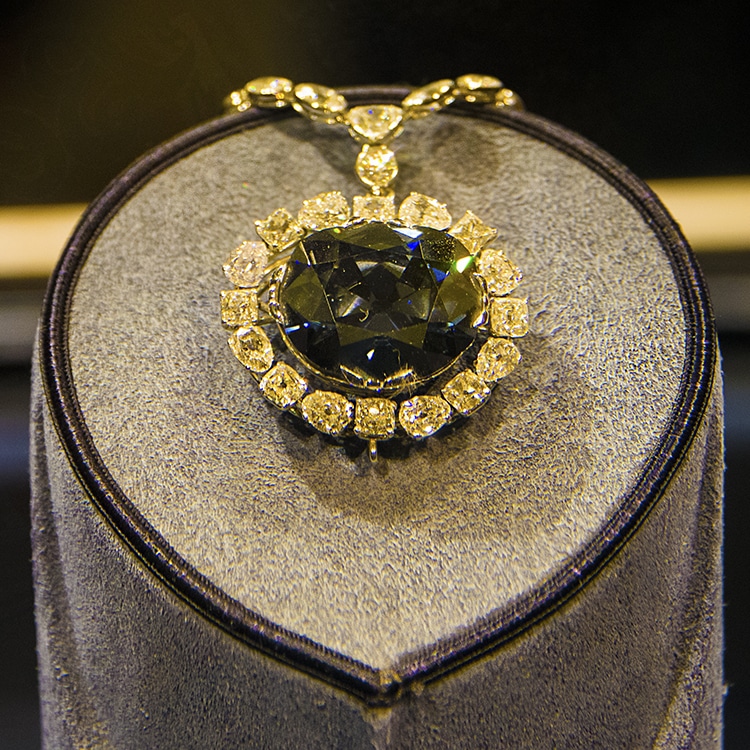 Nestled in a glass case at the Smithsonian National Museum of Natural History is one of the world's most famous gemstones—the Hope Diamond. The size of a walnut, the rich blue stone could be mistaken for a sapphire by the untrained eye. However, it is a rare blue diamond once worn by royalty and the filthy rich.

The necklace has long been the subject of speculation and whispers of a curse, but its history is a fascinating tale that spans from India to Washington, D.C., and Cartier to Harry Winston.

Read on to discover the twisted tale of the world's most fascinating gem.

What is the Hope Diamond? 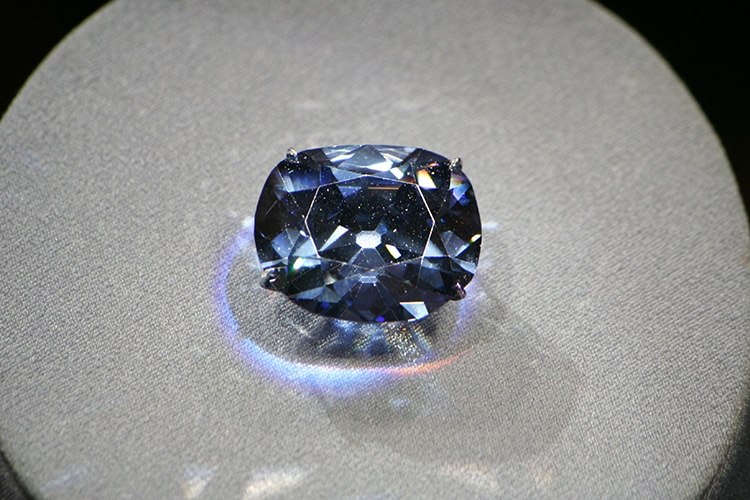 The Hope Diamond illuminated and without a setting. (Photo: 350z33 via Wikimedia Commons, CC BY-SA 3.0)

The Hope Diamond is a rare, colorful gemstone. It is an example of a fancy color diamond, specifically a blue diamond. The blue color comes from traces of boron within the famously hard crystalline lattice of the diamond. Blue diamonds can vary in shade. The Hope Diamond is described as “fancy dark grayish-blue.” It weighs an incredible 45.52 carats—the size of a walnut and much larger than any other diamond found in a similar color. The stone is (at present) cut in a cushion antique brilliant-cut with extra facets.

The deep blue of the stone hides some strange properties. Under ultraviolet light, a blue diamond emits a blue glow. However, the Hope Diamond glows red. This unique phosphorescent signature indicates trace nitrogen among the boron and carbon. This special mix formed into a stone over a billion years ago under Earth's surface. Today, it is set in a necklace. The blue stone is surrounded by 16 white diamonds and its chain contains 45 more stones.

Tavernier and the French Royal House 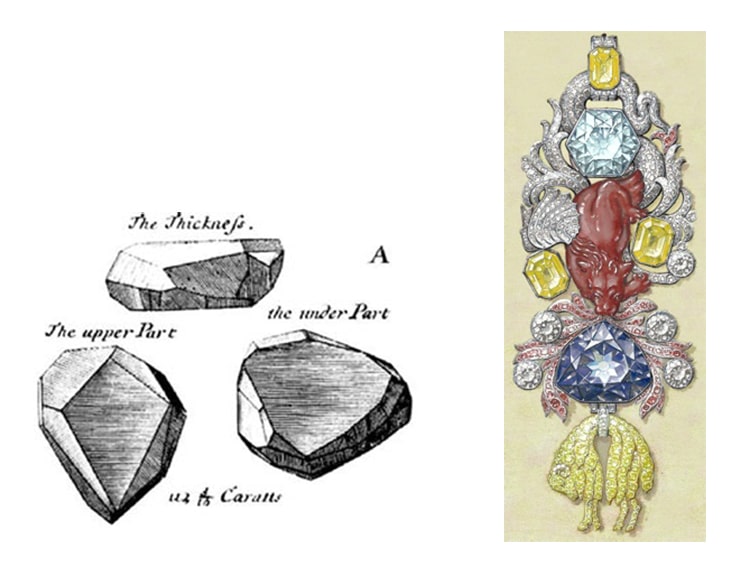 The Hope Diamond started as an even larger stone—if that is possible to imagine. The mining date of the diamond is not exactly known, but it is thought to have come from the Kollur mine in Golconda, India. In 1666, a French gem dealer traveling to India purchased a large, rough-cut blue diamond weighing 112 carats. The merchant, Jean Baptiste Tavernier, returned to France with what became known as the Tavernier Blue.

A diamond so magnificent deserved a royal setting. It was purchased in 1668 by King Louis XIV of France and soon cut by the court jeweler into a 67 and 1/8 carat stone. It was worn by the king as a pendant on a ribbon necklace. The stone took the epithet “Blue Diamond of the Crown” or the “French Blue.” In the 18th century, the diamond was reset in an elaborate pendant with other stones. The pendant was an honorific to be worn representing the Order of the Golden Fleece.

The French Revolution toppled the Ancien Régime. With the fall of the royal family, many of their treasures were looted. In September of 1792, the diamond vanished. It made its way to England and may have been owned by King George IV. It reappears in records of the London diamond dealer Daniel Eliason in 1812. The diamond has been significantly downsized and recut to its present-day weight. By 1839, the diamond was owned by Henry Philip Hope, a banking heir who died that year. The diamond then passed through the Hope family over the decades until its subsequent sale in 1901. 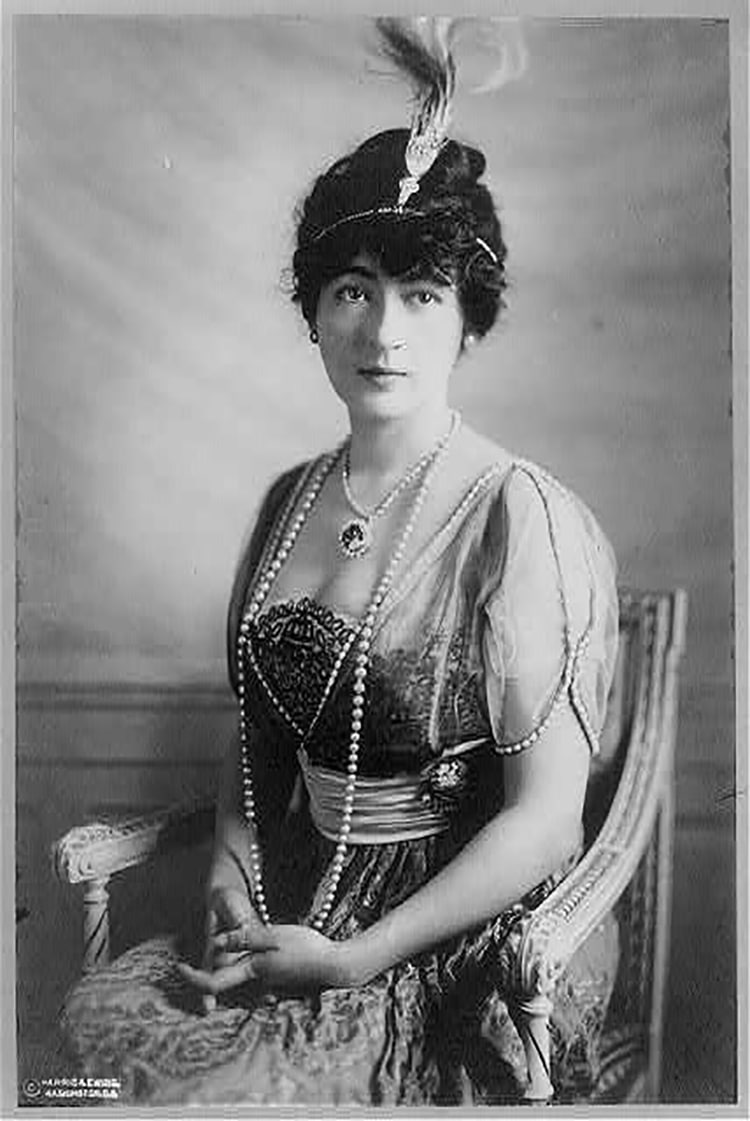 A diamond of such immense value is a valuable commodity but also a difficult one to unload on a buyer. In 1901, the posh British Hope family sold the diamond to a dealer, who sold it to Simon Frankel. Frankel brought the Hope Diamond to New York City, however, the diamond's stay in the United States was brief. By 1909, it had been sold again and was set to be auctioned in Paris. After changing hands several more times, the diamond found its way to Pierre Cartier of the legendary jewelry house.

Cartier had recently established a New York branch where he catered to the gemstone needs of the new and old money who flooded the Gilded Age city. He knew a status symbol when he saw one and bought the Hope Diamond with an American market in mind. The diamond, however, turned out to be rather difficult to sell as it was so expensive. Cartier targeted the richest of the rich: Mrs. Evalyn Walsh McLean, a new money heiress to a gold fortune who was married to the Washington Post heir. Mrs. McLean was known to collect brilliant large jewels, but it took several years and several settings for her to fall in love with the Hope Diamond. Even after making the sale, Cartier then struggled to receive payment for the $5 million (in today's dollar) gem.

While Cartier was trying to convince the millionaire to buy his diamond, public attention was noting the curse supposedly attached to the blue gem. Newspapers enjoyed publishing stories highlighting the misfortunes of past owners—real, exaggerated, and imagined. The ex-wife of the final Hope to own the jewel blamed it for her failed marriage. Others blamed the jewel for the beheadings of the last French monarchs. However, some owners such as Tavernier himself lived to ripe old ages. The Hope Diamond was already a legend of its own.

This legend may have appealed to Mrs. McLean, who did eventually pay for the diamond. She is responsible for its current white diamond setting. There is a small clasp below the gem for hanging additional pendants from her collection. She was frequently photographed at social events in her home city of Washington, D.C., bedecked in luxurious jewels including the famous and sensational diamond. She owned the diamond until her death at age 60 in 1947.

Harry Winston and the Smithsonian

Trustees of Mrs. McLean's estate sold her jewels to cover some debts. Harry Winston, the famous jeweler, bought the lot. The Hope Diamond became a central attraction in a traveling jewel exhibit run by Harry Winston. The diamond, however, was soon destined for a new home. Dr. George S. Switzer—a mineralogist at the Smithsonian National Museum of Natural History—wanted the unique gem for the museum's collection. The story goes that he convinced Harry Winston to donate the jewel to the museum. The jeweler made a patriotic gesture and contributed the gem to help found the gem collection seen today. 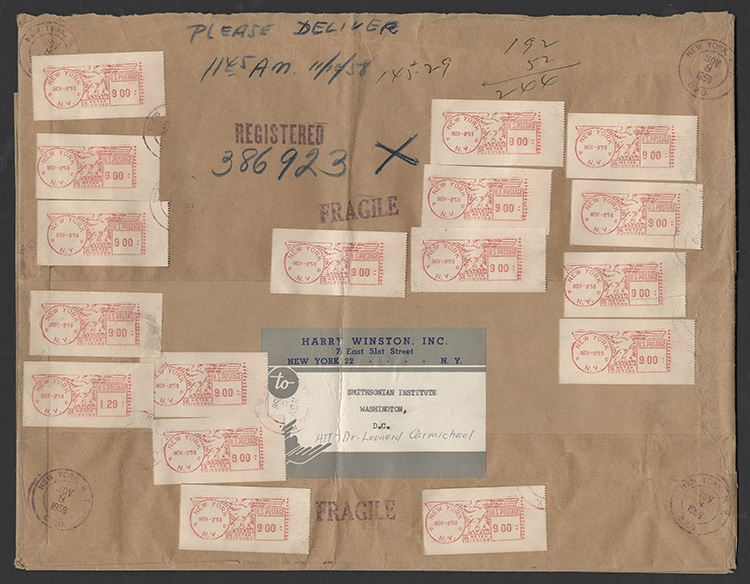 The Hope Diamond mailing wrapper in which Harry Winston sent the diamond to the museum. (Photo: National Postal Museum Collection)

A Diamond on Display 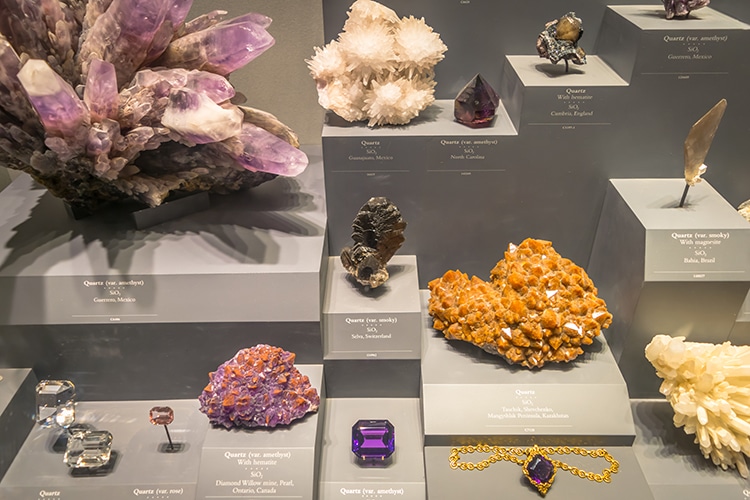 The Hope Diamond was sent by mail to the museum in 1958. With $142.85 worth of insurance (covering up to one million dollars) and $2.44 postage, the package took three days to arrive at the museum. Today the brown paper wrapper with postage is on display at the National Postal Museum.

According to the Smithsonian, “The Hope diamond has left the Smithsonian only four times since it was donated.” In 1962, the diamond was exhibited at the Louvre in Paris. To transport such an important gem, Dr. Switzer secretly pinned the stone in a pouch inside his pants' pocket for the entire long journey.

Today, the Hope Diamond is one of the Smithsonian National Museum of Natural History's most popular attractions. The mineral and gemstone galleries are a festival of color and dancing light refracted through precious stones. However, few sites match the deep blue of the mythical diamond which is displayed in its white diamond setting. The National Gem Collection includes such stunning pieces as Marie Antoinette's earrings and the Spanish Inquisition Necklace, but the Hope Diamond is the collection's centerpiece and source of fascination for many. 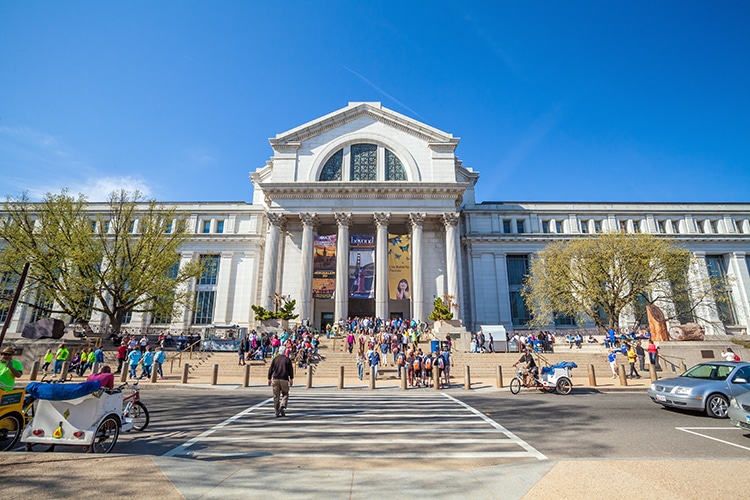 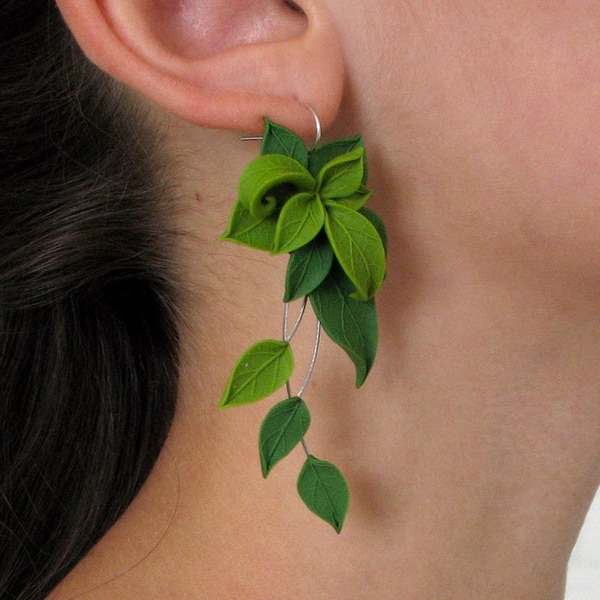 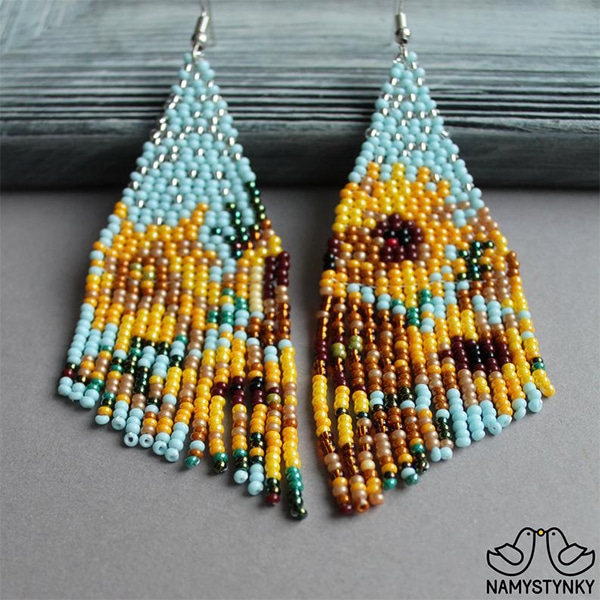 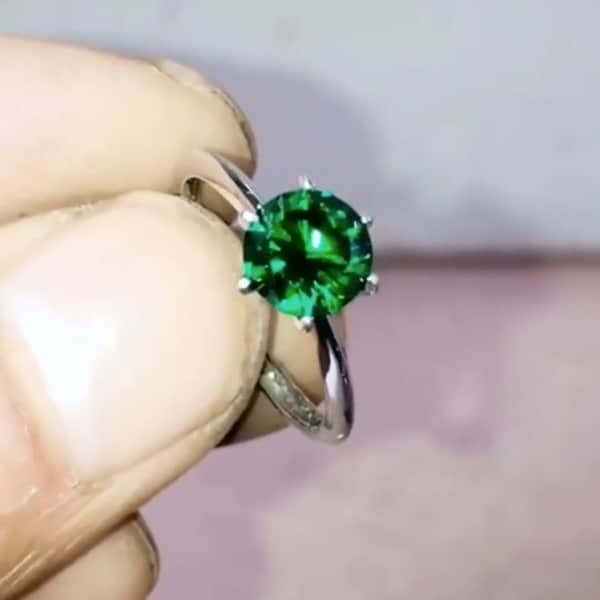 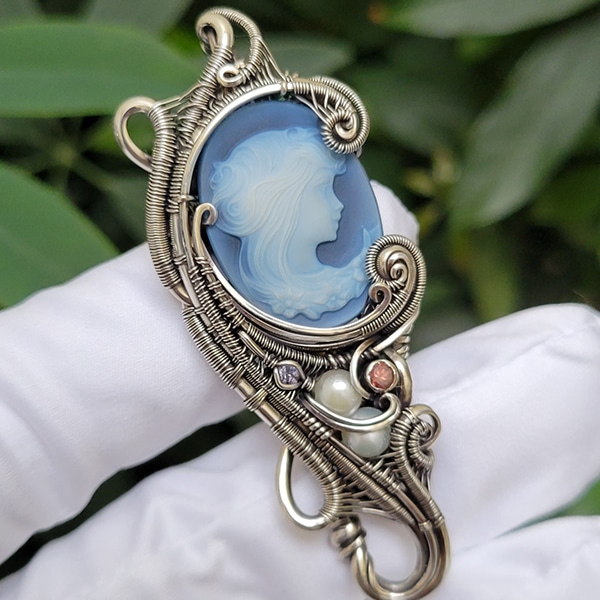 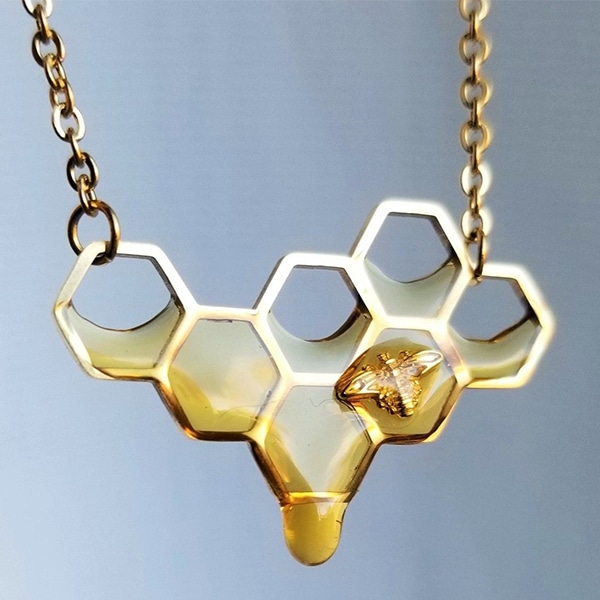 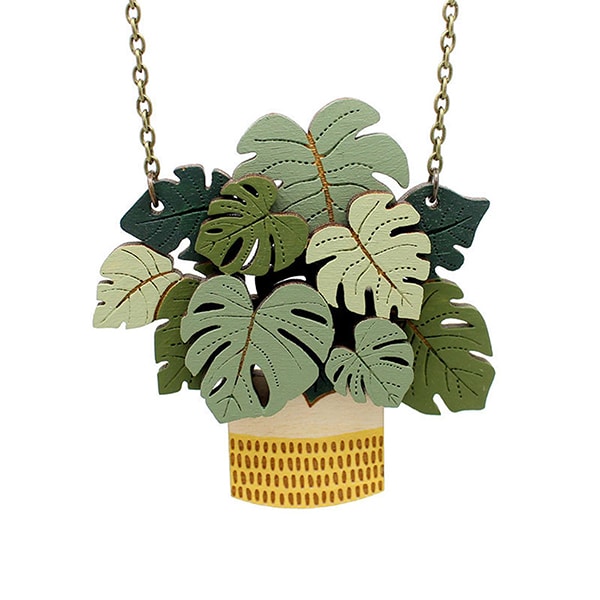 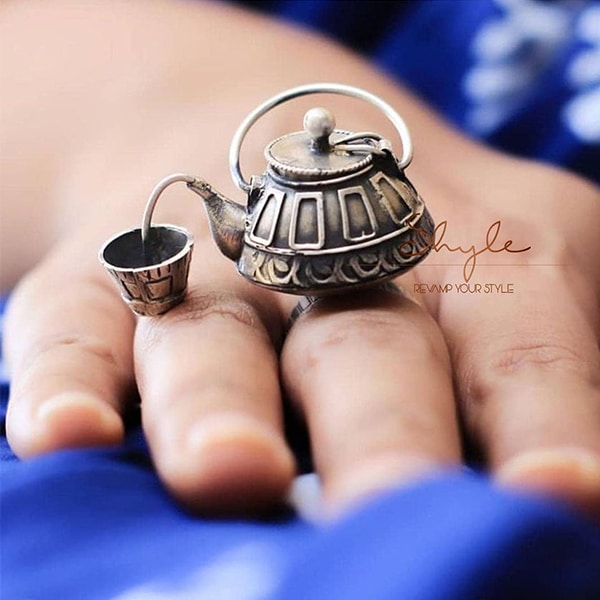 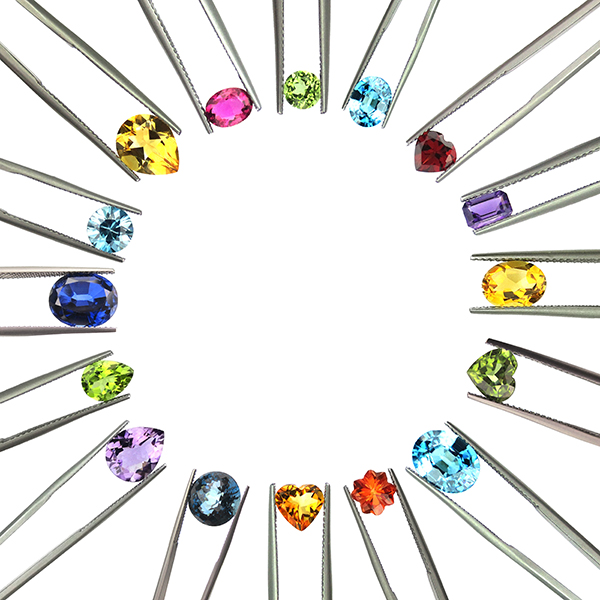 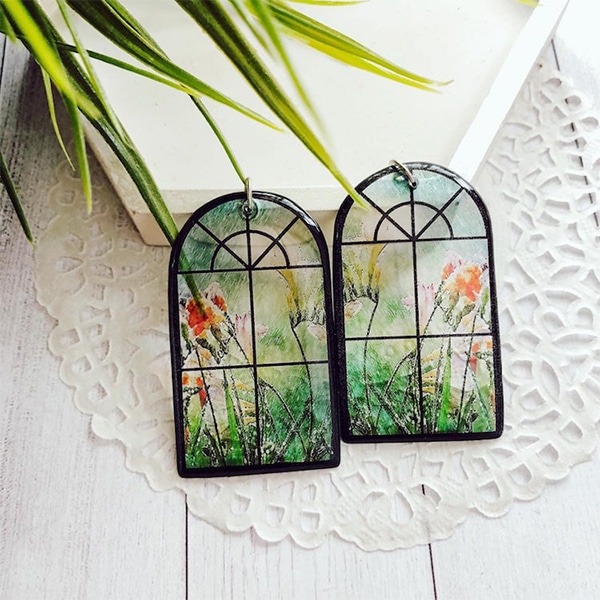 Glass Window Earrings Offer a View Outside Hanging on Your Ears