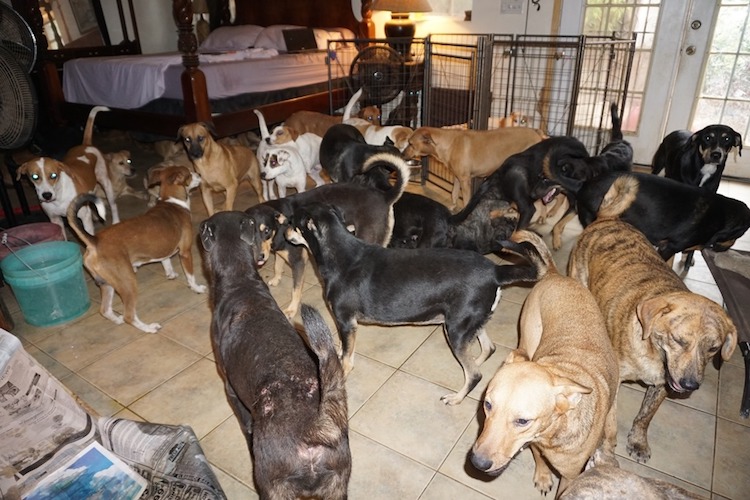 “I don't care about the constant cleaning as long as they are safe inside.”

Hurricane Dorian ravaged the Bahamas in early September, leaving devastation in its wake. The natural disaster was a Category 5 storm with winds gusting up to 220 miles per hour. Because of its wind speed, Dorian is tied for being the second-strongest hurricane that the Atlantic Ocean has ever seen. This intense wind was coupled with flooding and more than three feet of rainfall. Tragically, the citizens of Grand Bahama Island and the Abaco Islands will be recovering for years to come.

Amid the heartbreaking devastation, Dorian’s presence revealed heartwarming stories that showcase the best of humanity. Chella Phillips is a Nassau resident who runs an animal rescue called The Voiceless Dogs of Nassau, Bahamas that provides shelter, food, and vaccinations for the community’s stray and abandoned dogs. In preparation for the storm, she turned her house into a makeshift emergency animal shelter by bringing 97 dogs into her home. If that’s not impressive enough, 79 of the pups were barricaded in her bedroom. “The music is playing in all directions of the house,” she wrote at the time, “and the AC is blowing for them.” Dogs that were sick or scared were kept in donated crates.

Under Phillips’ care, she and the 97 dogs made it through Dorian unscathed. “The wind sounded like a train that wouldn’t pass,” she wrote on September 3. “It was so loud, water was coming in through the seams on the windows and underneath the doors, the dogs were scared. I tried to play with them, sing to them, gave them every last treat just to keep their minds off all the noise of the hurricane.” She also noted that many of the outdoor dog houses, tents, and crates were destroyed due to the storm.

The amazing story of Phillips and her kindness has since gone viral. Her initial September 1 post of how she housed all the pups was shared over 61,000 times on Facebook. The exposure has helped her to raise money for her cause, and it also allowed a majority of the homeless dogs to find other refuges. “The unfortunate events from the hurricane,” she wrote in a September 12 post, “inspired multiple rescues in the States to offer aid for my homeless dogs. We have been bombarded with TV news and reporters.” Earlier in the week, nearly 70 of her “babies” left the refuge for good.

Phillips is still raising money for Voiceless Dogs through her Fundrazr page.

Phillips runs The Voiceless Dogs of Nassau, Bahamas which provides shelter, food, and vaccinations for the community’s stray and abandoned dogs. Under her care, the dogs made it through the storm unscathed.

Her initial Facebook post went viral and, as a result, a majority of the dogs have found refuge with rescues in the United States. People from around the world have also donated to her refuge.