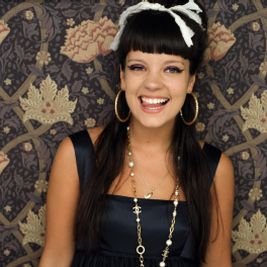 Don't let the button nose and cute cheeks fool you. English singer-songwriter, Lily Allen, has become one of the UKs most popular singers by sheer force of will. Allen created an account on MySpace and began posting demos and chronicling her life in November 2005. She quickly gained tens and then hundreds of thousands of friends and is now the fifth most popular musical act according to the social networking site. Her single “Smile” reached number one on the UK Singles Chart in July 2006. In December 2006, her debut album Alright, Still was nominated for the award of Best British Album at the BRIT Awards and for Best New Artist at the 2007 MTV Video Music Awards and was also nominated for a 2008 Grammy Award in the category of “Best Alternative Music Album.” It has sold an astounding 2,600,000 copies worldwide.

In her latest song, The Fear, Lily Allen throws around some bad words while prancing around in pastel heaven. Take a listen and let us know if this doe-eyed beauty belongs on our Met music player. It's Not Me, It's You will be released in the UK and United States in February 2009.