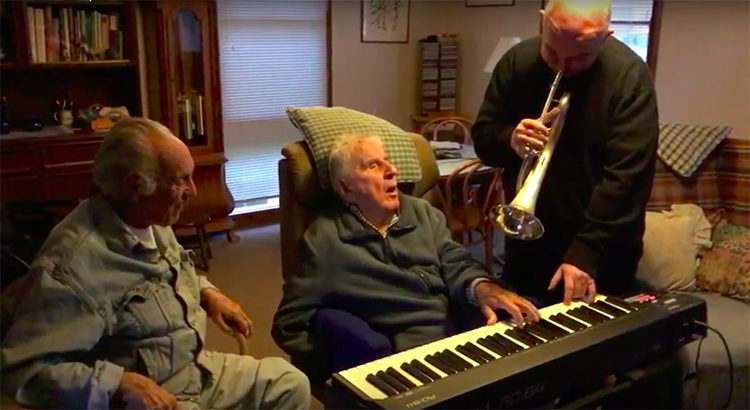 Some say that music is the key to your soul. A melody can trigger thoughts, memories, and—for some old time musicians—it might even reignite skills they forgot they ever had. This was the case for 94-year-old jazz pianist Julian Lee, who, ever since he suffered a stroke, had stopped playing the keys for many years—until now.

The legendary New Zealand-born musician was recently filmed playing piano with one hand, along with fellow jazz icon James Morrison who accompanied him on the same piano with his left hand, while playing the trumpet with his right. Australian jazz and swing musician Don Borrows is also captured dancing beside them, and Val (Lee’s wife) is seen behind them. Morrison, who posted the video on YouTube, writes, “[It’s] special being with my mentor Don Burrows and our great mate Julian Lee for the day in Mossvale. Jules hasn’t played for years since his last stroke…he turns 95 this year and we share our birthday…music is such a joy.”

Julian Lee was nicknamed “Golden Ears” for good reason. Blind since birth, he had acute listening skills that helped him become an internationally acclaimed multi-instrumentalist and producer. His born talent is clear in the video, where Lee is seen effortlessly jamming to Ella Fitzgerald’s “After You’ve Gone.”

All images via James Morrison.