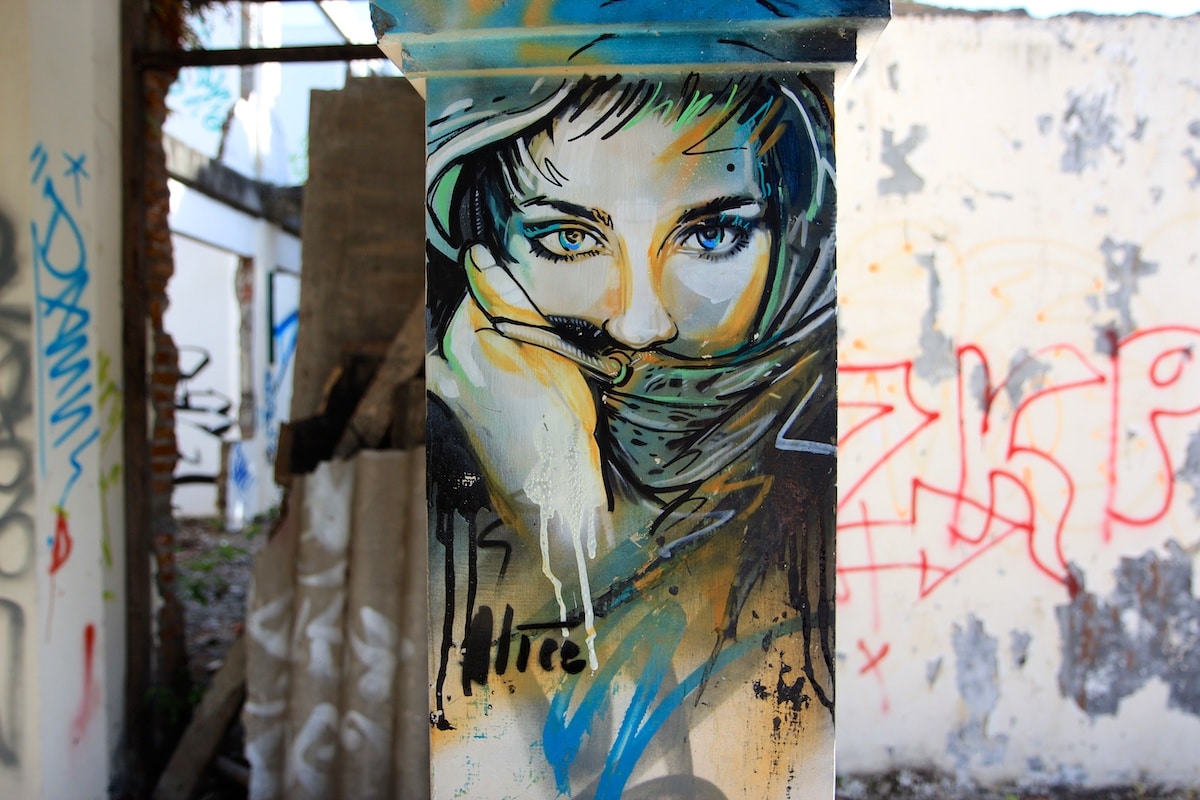 It’s not often that we get a peek inside the mind of an internationally renowned artist. But thanks to the new book Crossroads, a Glimpse Into the Life of Alice Pasquini, we gain an intimate look into the work of this creative force of a woman. Alice Pasquini is a prolific Italian street artist whose work has graced over 2,000 walls around the world. With her striking illustrative style, she depicts imagery expressing the emotional stories of people using vibrant colors fused with eye-catching textures.

Pasquini’s journey as a street artist and community organizer is told through Crossroads. The 300-page book shares her sketchbook drawings alongside gorgeous photos of her finished pieces. There are written components, too. Pasquini speaks about her work and there are insights from journalists and writers—including My Modern Met’s own Jessica Stewart. Stewart, a street art photographer and Pasquini’s studio manager, pens a profile as her close friend and confidant who has seen firsthand just how the artist's career has evolved into what it is today. The book is now available for purchase through DRAGO publishing, and you have the option of bundling it with a limited-edition print.

We spoke with Stewart about street art, her friendship and working relationship with Pasquini, as well as what it was like to bring Crossroads to life. Scroll down for My Modern Met’s exclusive interview. 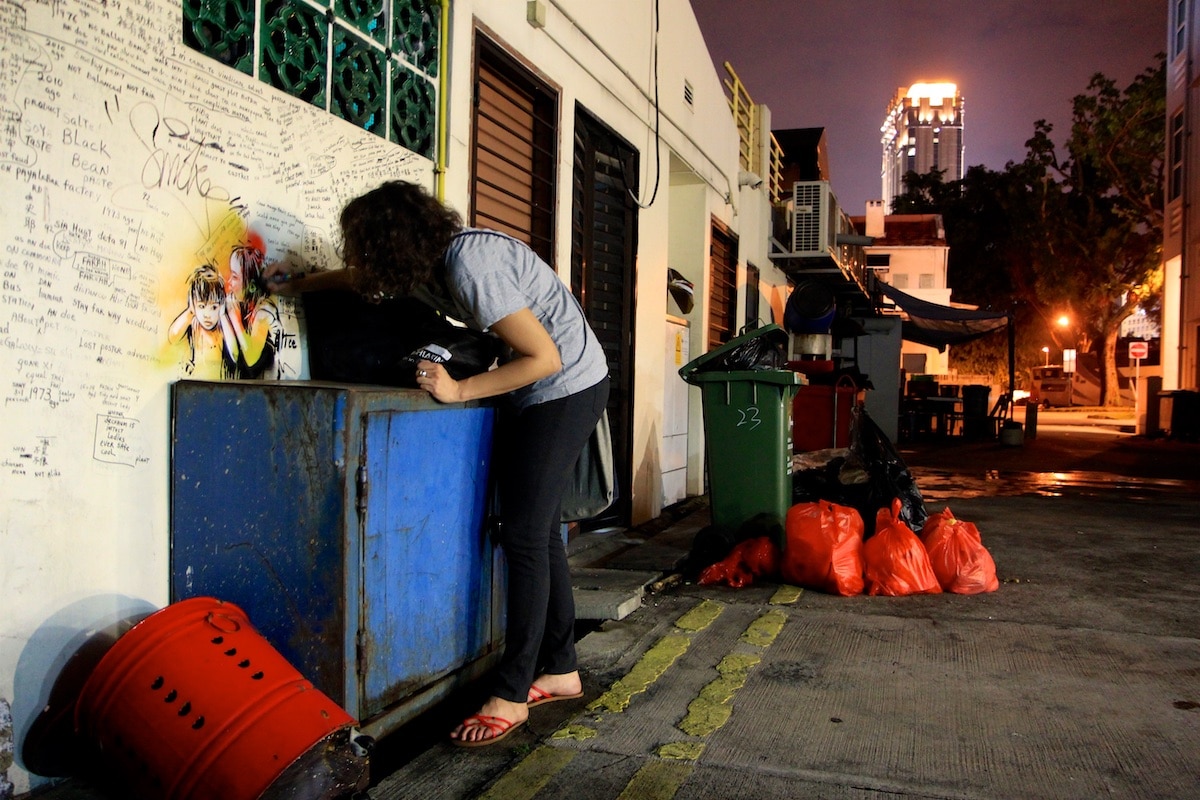 How long have you worked with Alice, and how did that working relationship start?

Alice and I first met in 2008 when I started documenting street art in Rome. From there, a friendship was born, and when she moved back to the city after time away from Paris, I used to swing by her studio after work to chat. It was there that our friendship started transforming into a working relationship, as she was getting busier and busier and needed someone she trusted to help her run the studio. This was in 2012. I was ready for a change in career and so started helping her out, which then morphed into me being able to leave my old job and dedicate a good amount of time to her work. Around 2013 is when we really began traveling a lot together and I started helping her bring to life some of the projects she had in mind. From there, things have only continued to grow. 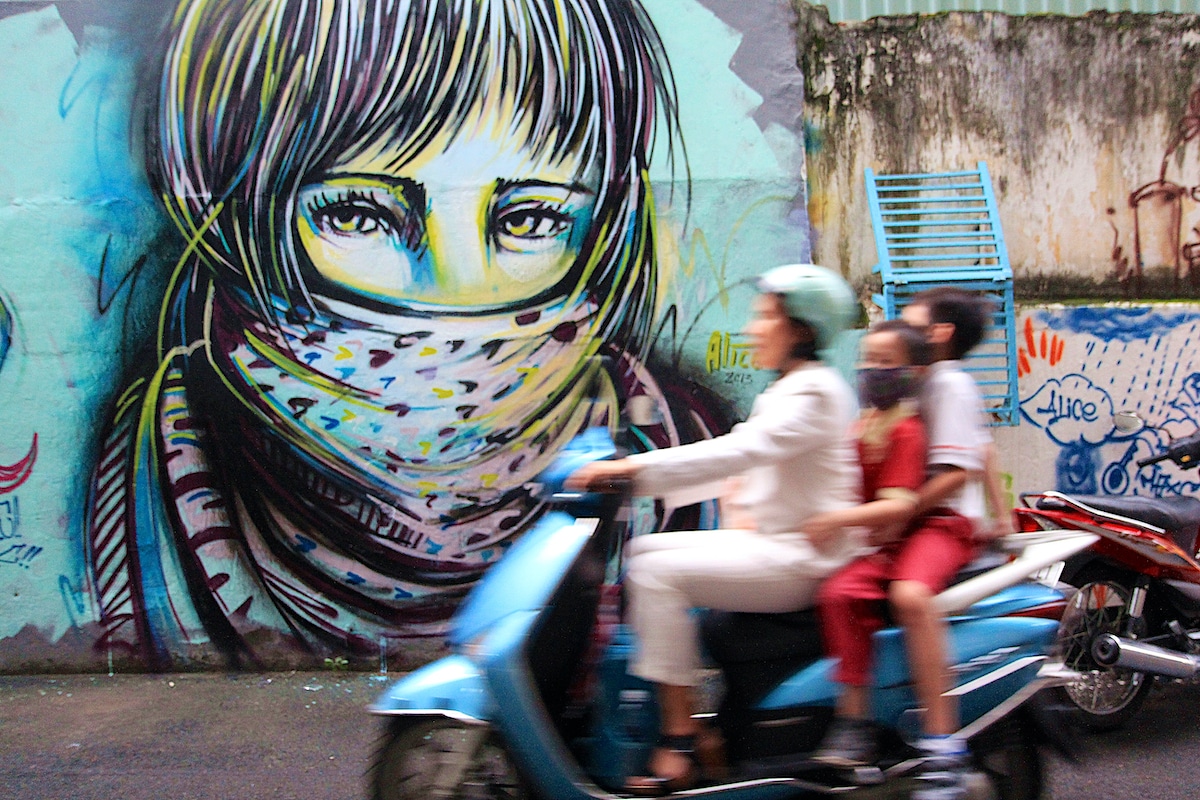 The way I came upon street art is a bit unconventional, in the sense that by education I'm an art historian who specialized in the Italian Renaissance. In fact, it was my love for that type of art that pushed me to leave the U.S. in 2005 and move to Rome. But funnily enough, while I was working in my field of study, I also began to be fascinated by the contrast with contemporary Rome. As a creative outlet outside of the office, I began carrying my camera with me everywhere and started taking images of Rome from a different perspective. That's how my blog at the time, Rome Photo Blog, came about. I'd take photos while waiting for the bus or during walks in neighborhoods off the tourist track.

One day, in 2008, I was walking in the student district and noticed a bunch of handpainted posters painted on the wall. I knew nothing about street art but was intrigued. The art historian in me set about doing some research and I wrote an article about what I saw. I also published the photos to Flickr, which at the time was a haven for street artists to exchange their work—this was before Instagram. Some of the artists read what I wrote and invited me to one of the underground art shows they were curating. From there, the rest was history. At the time, no one was paying attention to what was happening with street art in Rome and there wasn't a lot of visibility for the artists from the city. This got me really inspired to help promote their work because I wanted to show the work and the amazing talent that could be found here. 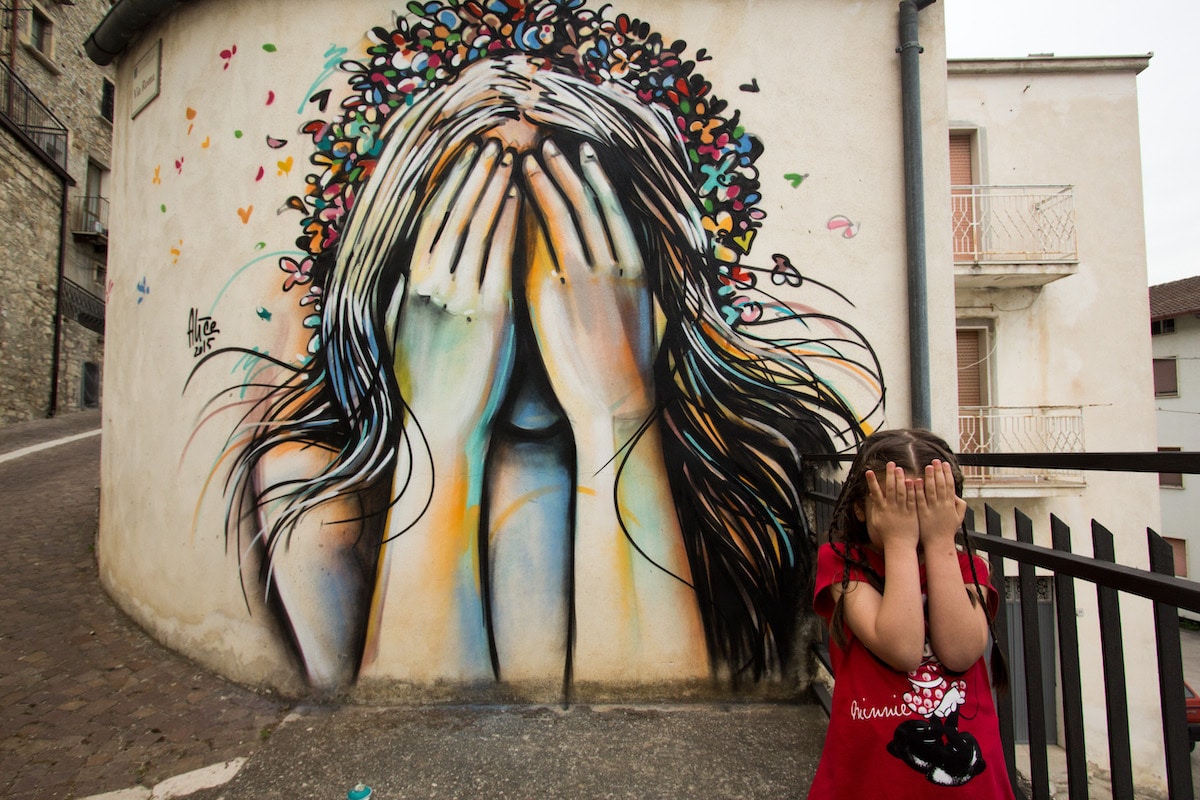 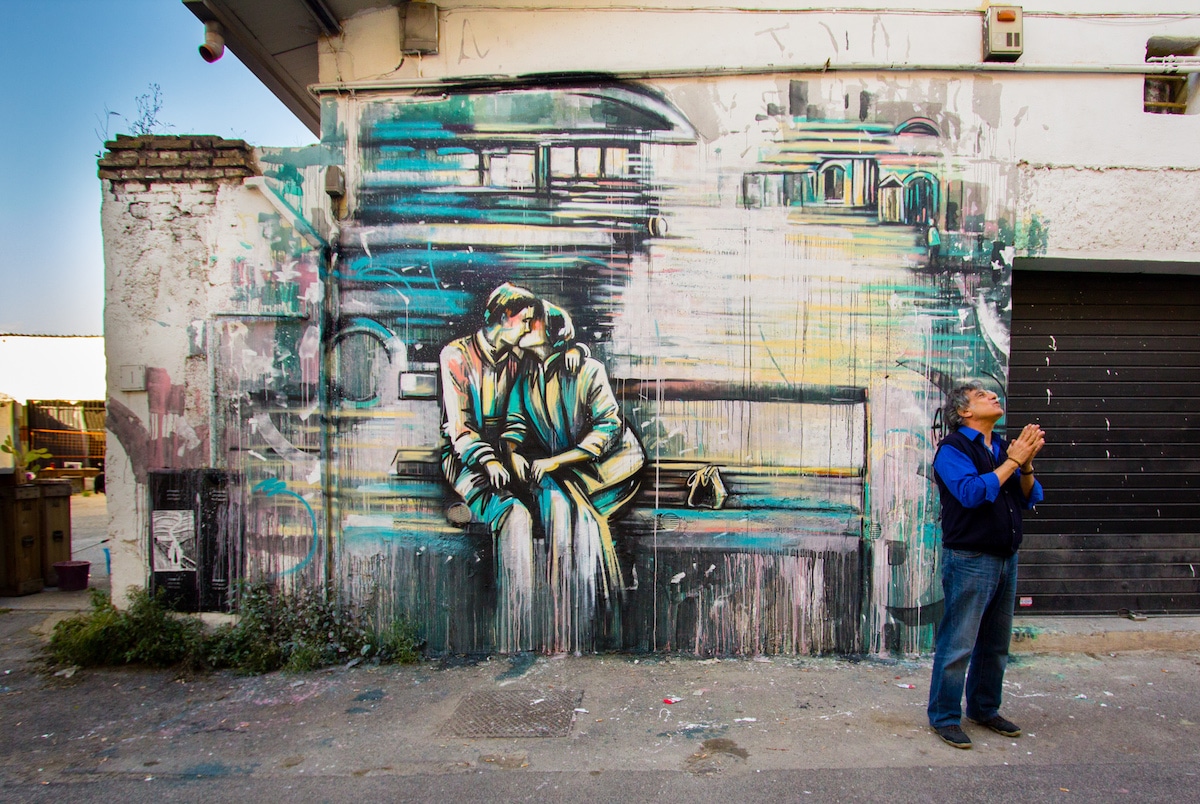 You've been a curator of street art in a time when it was challenging to paint outside in Italy. How and why do you think that's changed over the last decade?

I think that what's happened here mirrors the growth of street art from an underground movement to a mainstream phenomenon, it just took longer to get here. Now there are more opportunities to paint big murals and have authorization for public art projects. This has dramatically changed how artists are able to express themselves. Of course, this has also caused a lot of people to think that street art is only large murals and that's not the case. Stickers, posters and small stencils are just some of the other mediums that are fundamental to the art form, not to mention sculptures and other types of installations.

Success has also meant that there's a whole generation of artists now starting with a leg up. When I started photographing the Rome scene, the artists were working purely out of passion. There were no street art galleries and paid events. The mainstream success of street art means that these artists can now make a proper living doing what they love if they manage their work correctly, which is always something great to see happen to deserving creatives. 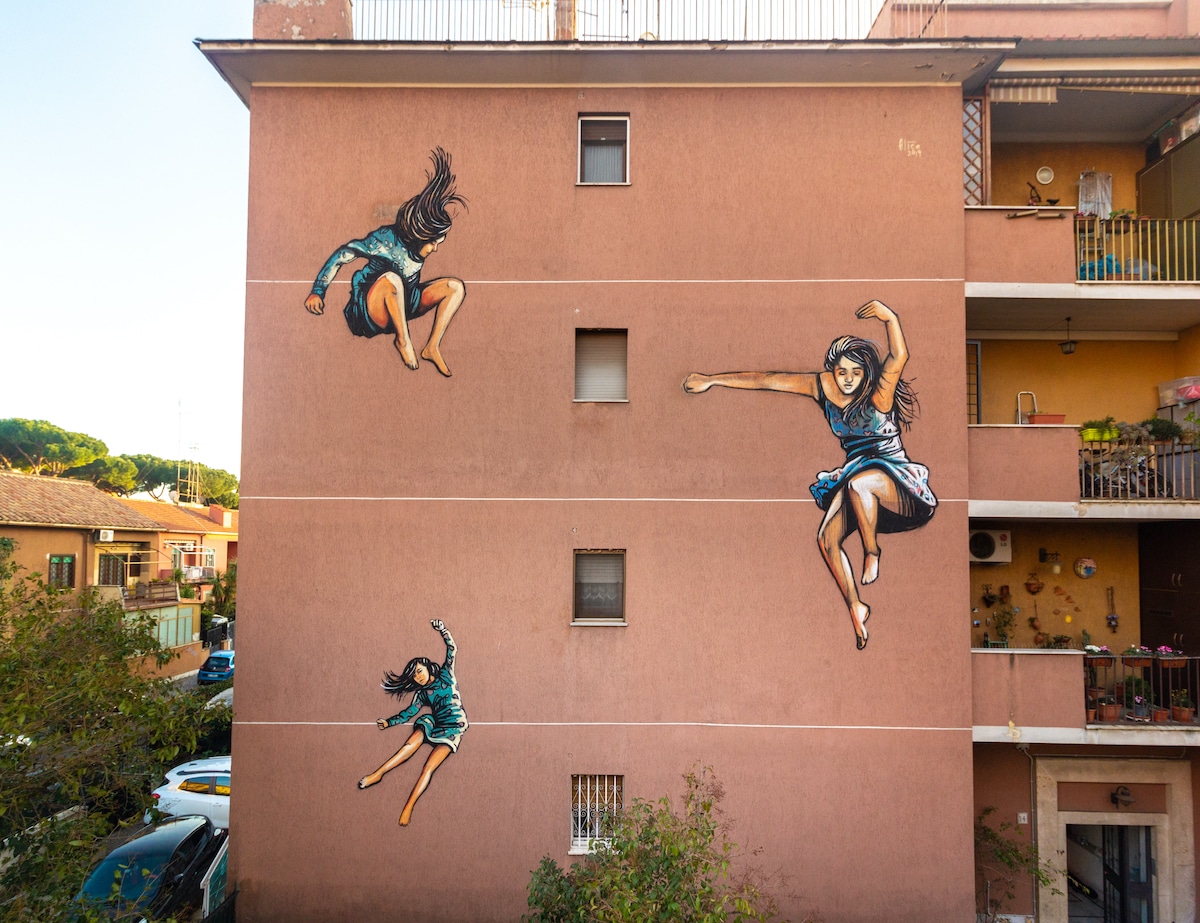 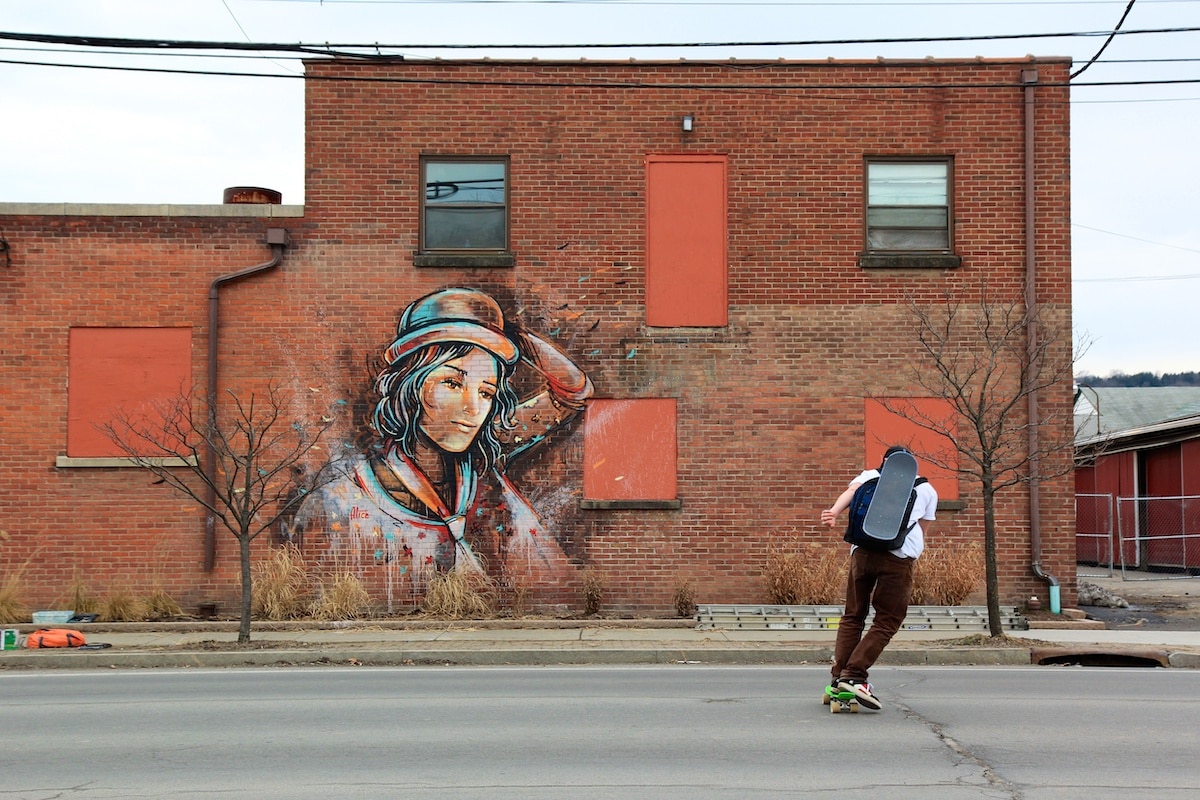 What attracts you to Alice's work?

Alice's work always impressed me because I love art that makes me feel something. At heart, Alice is a storyteller and her figures are impactful. I also always loved the way that she used the urban environment in a clever way by finding the perfect spot for her small stencils.

Watching her work is as exciting now as it was the first time I asked if I could follow her with a camera and we went around a Roman neighborhood in broad daylight to paint. Seeing her work quickly on small, spontaneous pieces is thrilling to see how fast she's able to express her idea and also to get the immediate reaction of the spectators.

For her large-scale work, it's really impressive to see how she takes a small black and white sketch and, without projecting it, blows it up on a huge wall. Watching her work on these large walls also brought a lot of respect because it's very physically demanding—something many people don't realize. I love the moment when she's at the point that people on the street can also see what the end result will be. You can see a lightbulb go off in their heads when they see how a piece of art progresses from start to finish. This is also why it’s definitely fascinating to be there while she works; you really get to do an anthropological study on how the public reacts to art. I always try to help paint the picture of this entire creative process and what the mood was while she was painting through my documentation of her work. 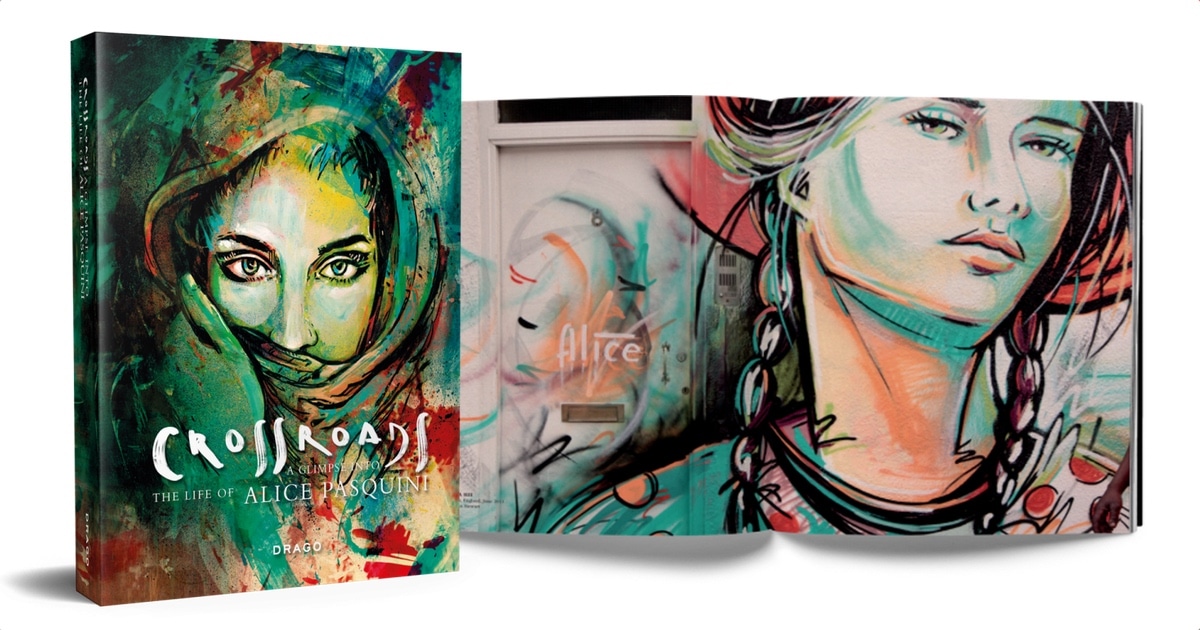 How did Crossroads come about?

Alice has had a concept for a book in mind for a long time. We are very fortunate that one of the leading publishers on street art, DRAGO, is a Roman company. They have known Alice for years and so it was a natural fit that came together over the last year.

What role did you take in the creation of the book?

Alice had a very clear vision of how she'd like to see the book unfold, so my role was to really act as an archivist. We poured through a huge archive of photographs, not only my own but all the images we have of her work. Cutting things down was very difficult, but together we tried to make a selection of photographs that showed the best of her work over the past 10 years.

From there, I helped piece together more practical information, like the date and place where all the murals took place, as well as helping Alice reach out to photographers and other contributors to make sure that Crossroads was everything she wanted it to be. Taking her artistic vision and helping make sure that it all comes together is my principal role in a lot of her projects, which is something I find really satisfying. 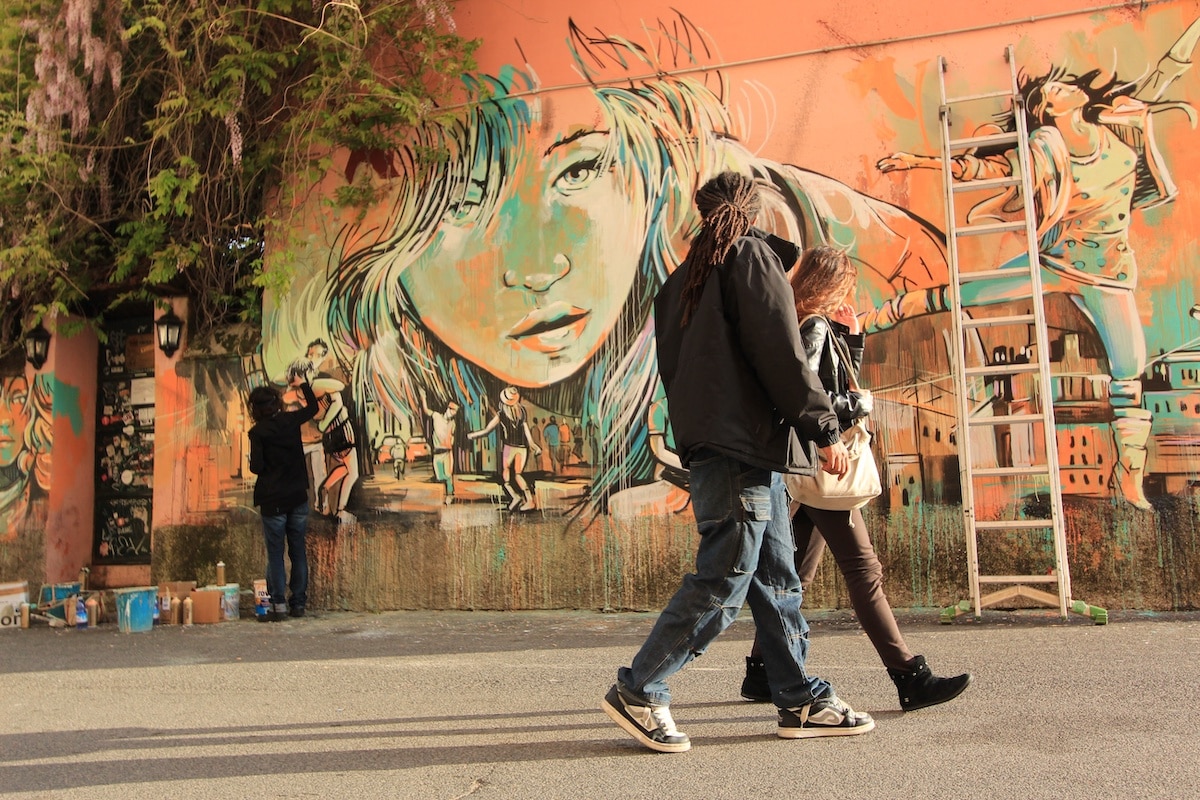 You wrote a heartfelt piece in the book talking about your relationship with Alice. How did you find this type of writing versus the other writing you've done for My Modern Met?

My text contribution to the book is quite different from how I approach my work for My Modern Met. This was purposeful, though I think it would be difficult to write about Alice and her work with an objective tone given our working relationship. I felt it was important for people to get a different perspective on Alice, not only as an artist but also as a person. Very few people get to see the true labor behind the career of a successful artist and the blood, sweat, and tears that it takes to get to that level. It's not easy and I wanted people to be able to see a bit more about that, while also learning about who she is as a person.

In that sense, I decided to leave my art historian mentality at the door and simply speak from the heart because there were probably few people who could give that insight on Alice and her work. Definitely, when I write in general about art for My Modern Met, I'm trying to simply evaluate an exhibition or set of work with a more critical eye and without having the insider's knowledge on how the work evolved.

What can readers expect from Crossroads?

Crossroads is great because even if you aren't specifically familiar with Alice's work, it will take you on a journey around the world through the eyes of an artist. Alice gives a lot of her own personal insight, sharing special moments and letting readers in on her motivation. So, anyone who loves art, it's a wonderful way to get inside the mind of an internationally recognized artist. Of course, fans of Alice will be able to enjoy beautiful images of her work, as well as small sketches that reveal her creative process. We were very lucky to have photographers like Martha Cooper and Ian Cox, who are highly respected street art photographers, contribute to the book. Alice really wanted to make a well-rounded book that was not only rich in visual imagery but would have text that made you want to dive in and read more. With that, I think we succeeded. 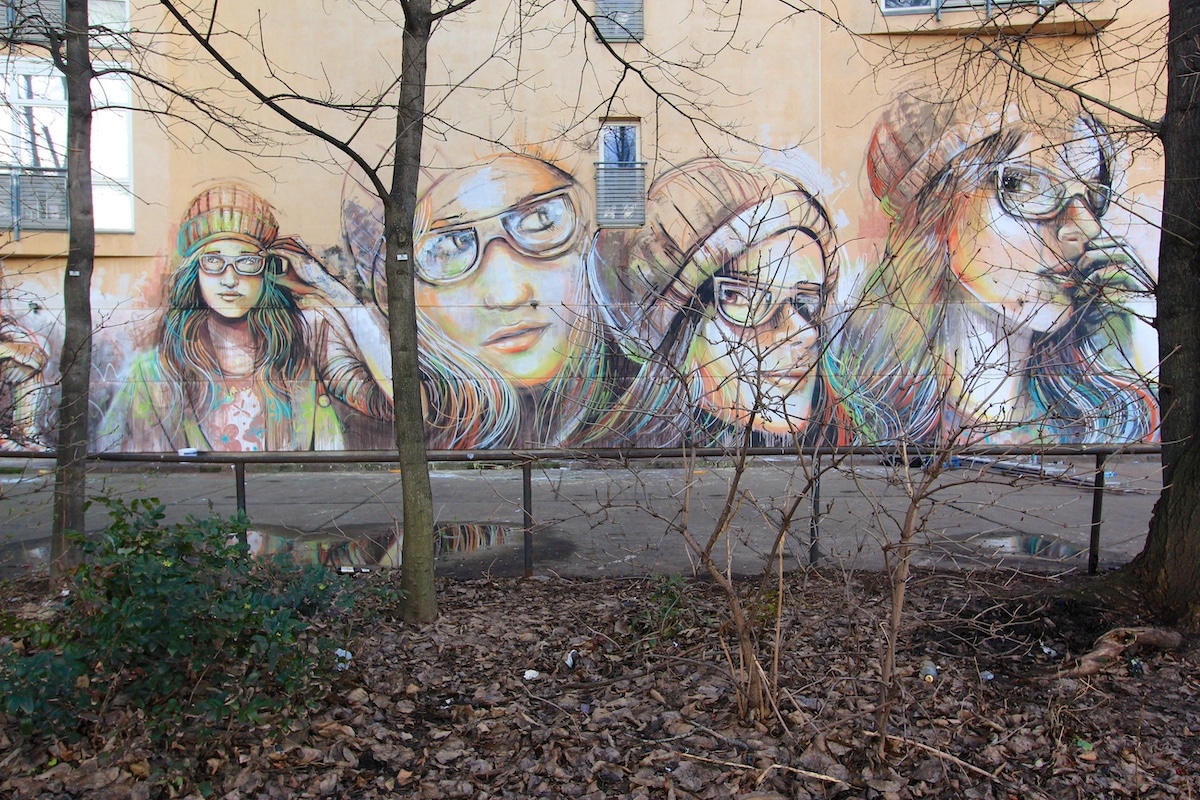 Like street art? Share
Like My Modern Met on Facebook
Get Our Weekly Newsletter
Become a
My Modern Met Member
As a member, you'll join us in our effort to support the arts.
Become a Member
Explore member benefits