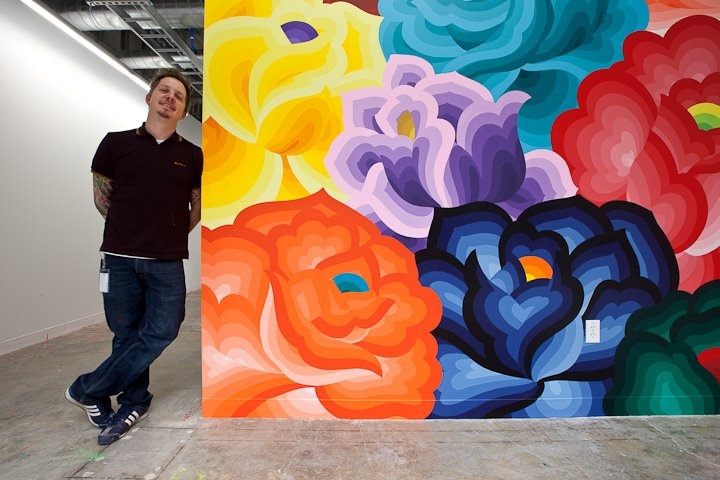 How does one get to paint a mural inside Facebook, the social network people just can't stop talking about? A few days ago, we shared that Facebook recently put up a gorgeous new mural in their Menlo Park, California headquarters. Today, we bring you an exclusive interview with Jet Martinez, the talented artist who created it. Read about the inspiration behind the mural and find out how his Mexican heritage influenced the beautiful piece.

How did you get commissioned to put up a mural at Facebook?
The short story is that I sometimes work with an art consultant named Danielle Wohl, who connected with a group within Facebook called the “Facebook Analog Research Lab.” They wanted to do a residency program for artists to come onto campus and do work inspired by what they saw. I was fortunate to be the first artist up.

The slightly longer story is that I've put in some serious time over the years developing my craft on the streets and indoors, and the fruits of my labor seem to be starting to pay off. It's one thing to be called up to do a project, and quite another to be ready to tackle said project.

Did they give you direction or did you come up with the concept of Bouquet yourself?
No. They were great on that regard. The only direction I was given was to try to take in a bit of the Facebook experience and translate through my work. With my work, the best results come when I am given full license to do my thing.

I have been working on a series of murals based on Mexican folk arts. In one way, to talk about some positive aspects of Mexican culture without beating you over the head with depressing politics of immigration, drug wars, race relations and all the usual things you hear from Mexico/ US relations. In another way, to try to see murals and graffiti as one of the San Francisco Bay Area's most common form of folk art. Art for the people by the people.

This design was roughly inspired by embroidery from the state of Oaxaca… but it definitely has my own flavor and style. In my work there are a lot of ideas which do not come through in the piece, but are added like emotional ingredients. There's something in this piece about the uniqueness of the individual and all its complexity. But also, how the individual, when brought together with other individuals, can create a more beautiful resonance… a better world. I think this is the way I use Facebook, and that's what I get out of it. It's super subtle and lost in the vivid visuals, but that's all in there.

How has it been received both by Facebook employees and the public?
My impression is that it has been very well received. Some of the employees working in the area threw a little party the day I finished and even got French macaroons (my favorite!) catered. A lot of people came up and expressed their appreciation. In the last couple years, I've done quite a few projects in corporate spaces, and I have been really surprised by the incredibly warm reception. I always assumed that the places that really needed beauty were the streets, but I'm starting to see the deep desire and need for more art in workplaces as well. Still, I will never stop painting on the streets.

What was the most challenging part of this job?
Frankly, this was a cake job. The people at Facebook, from the facilities to the guards to the top of the food chain, made me feel very welcome and provided everything necessary. Even candies and coconut water!

I have a couple little kids so, these days, the biggest challenge is coordinating my schedules to get the most working time while taking care of family business. There are never enough hours in the day to paint.

What's next for you?
A few things up in the air. My next project is a project in San Francisco's Tenderloin district. An outside project with the SF Arts Commission. Then a couple private indoor commissions and, possibly, another Facebook project. In the summer, I have to get serious on finding a good project in Oakland, where I now live. At night, I will be working for a couple shows happening later this year. Two shows with my lovely wife, Kelly Ording. Somewhere in there, I'll be working with the Clarion Alley Mural Project (in SF's Mission District) to get it tip top for its 20th anniversary block party. And in a parallel state of consciousness, giving a lot of love and attention to my family. Hustle, hustle, hustle. 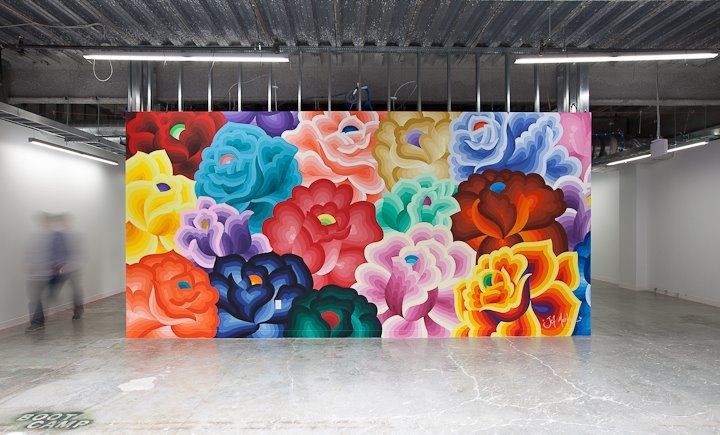 Thanks for the interview, Jet. Stunning work!