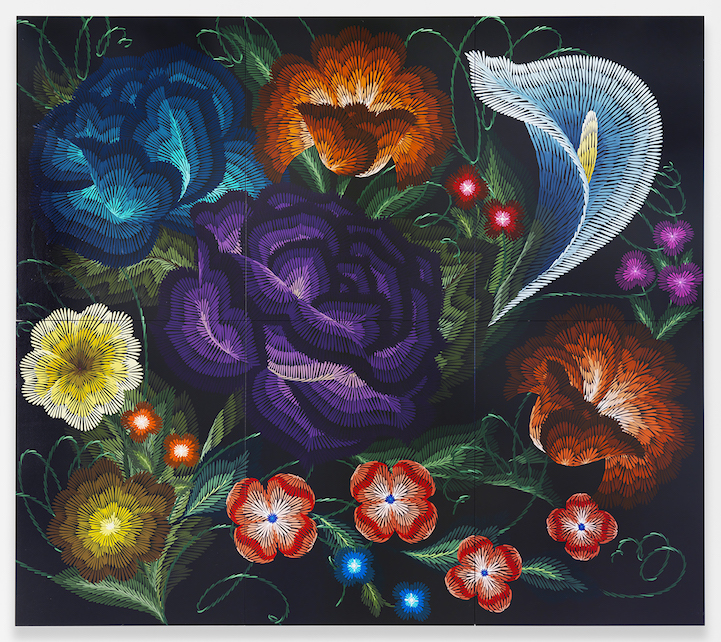 Muralist Jet Martinez has earned his spot as one of San Francisco's most widely recognized artists. Using rich colors, expressive floral patterns, and an aesthetic inspired by Mexican arts and crafts, Martinez has completed over 80 public and commissioned murals. In 2012, the creative accomplished another impressive feat when he became Facebook's very first artist-in-residence. Through his work, Martinez hopes to communicate with his viewers. He aims to unite various cultures as he demonstrates that all human beings similarly search for beauty and community. Martinez strives to dissolve geographic boundaries so onlookers can explore unfamiliar traditions and time periods.

Last month, the artist premiered his very first solo exhibition at New York City's Joseph Gross Gallery. To learn more about his Flores en Fuego showcase, we reached out to Martinez for an exclusive interview, which you can read, below. 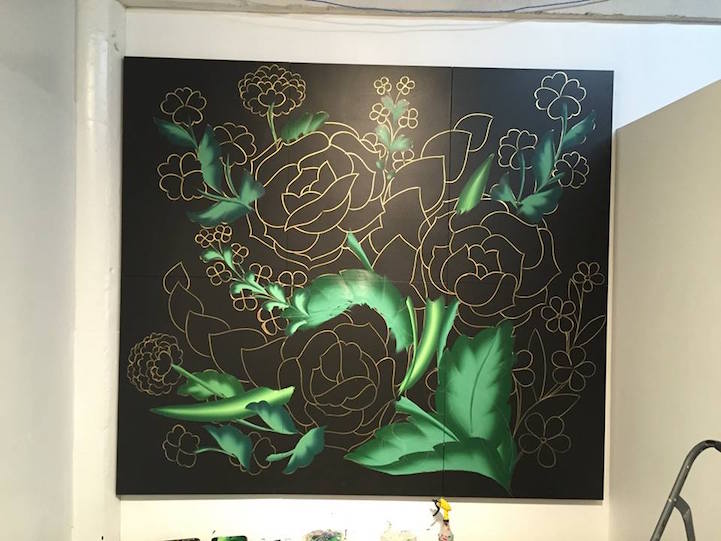 How would you, personally, describe Flores en Fuego?

The first impetus with this show was to have some fun with it.

This last year was really busy with gallery shows where I had made loads of small works. I had been approaching shows based on singular themes and making several works based on those themes. For this show, I wanted to play to my strengths and make larger work that plays with and mixes a lot of styles I have been working with. A larger overarching theme in the work I have been doing in murals and in paintings is to talk about inspirations I find in Mexican folk arts. I use this as a way to advocate for Mexican culture and its arts. Instead of being specific about the folk arts that inspire me, my goal with the work in this show is to create something that feels very Mexican to me by using the materials and memories that I have available. 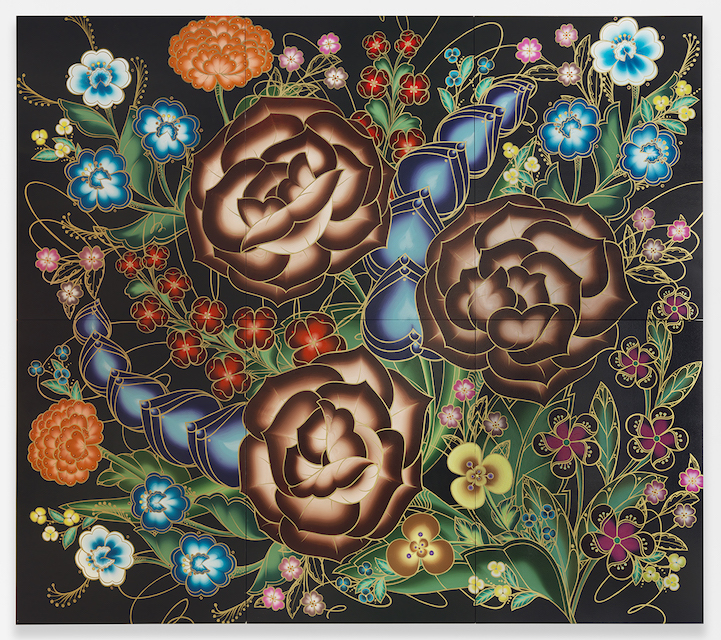 This is your first solo exhibition in New York City, which is very exciting. What do you think about the NYC art scene?

The New York City art scene is great. I love and represent my Bay Area community with pride, but there really is another level of engagement from the people who attend the shows. In NYC, it seems, audiences are just exposed to more types of art, and are accustomed to going to more shows and museums than in the Bay Area. Again, I take nothing away from our art scene, because we live in a dynamic maker community in the Bay Area, there just aren't so many professional level outlets for artists to plug into.

All in all, I was very well-received and was given a lot of love while I was in NYC and have nothing but good things to say about the NYC art scene. 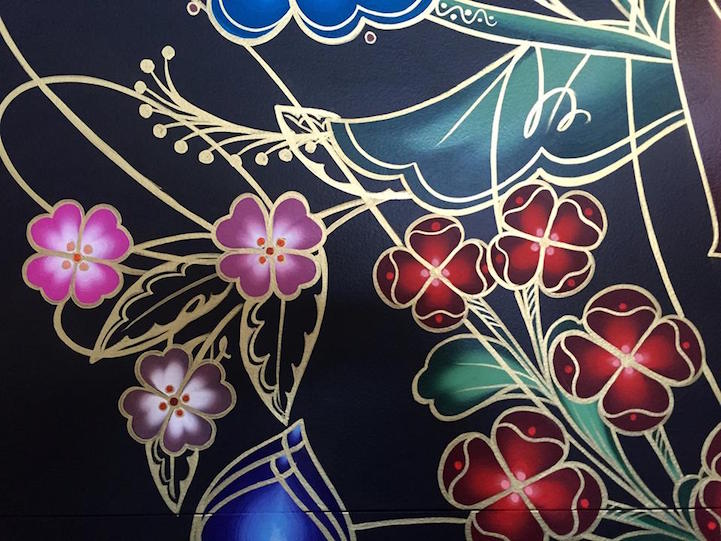 A lot of your work is influenced by where you grew up. Did Cuernavaca, Morelos, Mexico inspire this particular exhibit?

The place I grew up really inspires not only the work in this show but a lot of my work in general. In part, I started on this work as more and more bad news was coming out of Mexico in American media. I wanted to approach giving homage to the beauty of Mexican culture without talking about the usual hot button issues. As this series has evolved, I've started to recognize that a lot of my work is not only meant to celebrate Mexican visual culture, but also to recreate for myself visual triggers that make me feel like I'm home. I'm starting to become more interested in making things that evoke a feeling of my own interpretation of Mexican visual culture. It's like living on the Moon and trying to recreate the feeling of Earth with the tools you have available and only your memories to guide you.

This show has a piece called Noche en el Ajusco or Night on the Ajusco. The Ajusco is a large mountain to the north of Cuernavaca that separates it from Mexico City. That part of Mexico is crazy magic with Nature. So many kinds of plants and bugs and animals. The piece is in a style I've been working on that references these fairly common paintings of birds on trees that are typically done on paper made from the bark of the amate tree (papel amate). In my hometown, these bird and flower motifs are also used to adorn architectural elements of homes and businesses. I always loved these little paintings. Noche en el Ajusco is a piece that, even though it's not strictly traditional, is my attempt to give props to that work.

I think that as an immigrant, I spent some time trying to assimilate into this culture when I was a child. As I've gotten older, I've felt a really strong urge to reconnect with my first home. Like many immigrants, I romanticize my vision of home. When I cook up imagery based on Mexican imagery, I season it with a bit of nostalgia that is not necessarily an accurate representation of the actual place.

More and more, I am trying to let both of my cultures speak for me, and I am enjoying the process of letting go and letting my hand do the thinking. In other words, I am becoming less interested in creating true representations of the Mexican folk arts, and more interested in allowing what is in my mind and my heart do the talking. I am starting to learn to trust the memories within me and let the painting practice I have been developing for over 20 years take over. 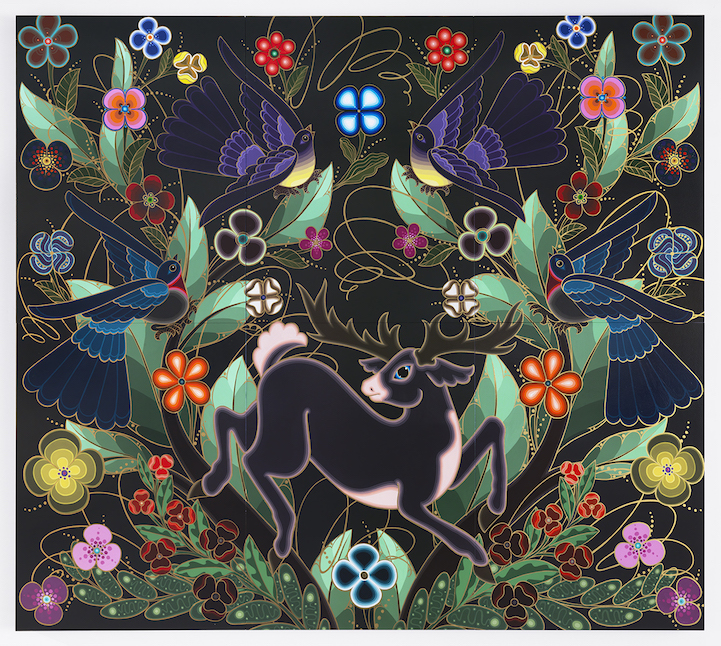 You are known for your impressive, public murals. Your latest exhibit is instead being shown at a gallery. Did this change in venue affect how you created your murals?

I really don't make separations between my mural work and my gallery work. There is definitely a difference in the tools that I use, but the intent behind all my work is really to create engaging, unique work before anything else.

The pieces in the show fall somewhere in the middle. They are either very small murals, or very large paintings. Oddly enough, I work a lot faster at a larger scale. It was a bit of a gamble to make three large paintings (that I have to store) be the focus of the show, rather than a body of work made up of many smaller pieces. But the gamble paid off because I really was able to put more into the individual pieces. The pieces are more precious than my murals usually are, but they are also more loose than my paintings usually are. This format of large scale painting is something I haven't been able to explore too much, but is definitely something I intend to work on more. 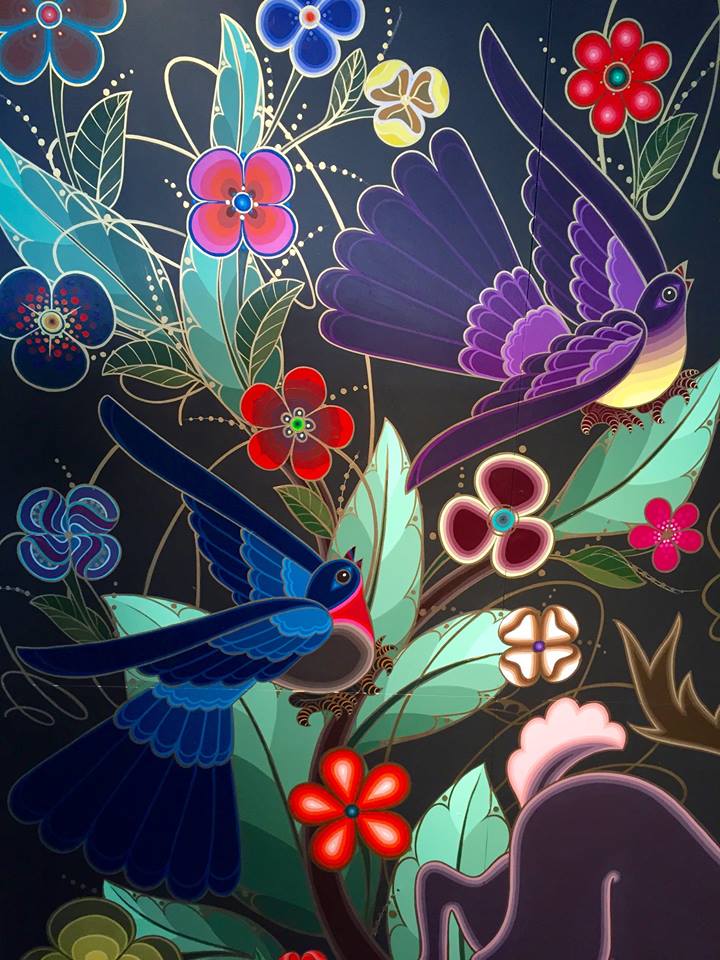 I read that you use traditional Mexican arts and crafts as muses. How did you incorporate this into Flores en Fuego?

There are basically three different styles represented in the show. One is a style that is reminiscent of embroidery, one is the flower and bird style I talked about, and the third is based on a style of florals done on plates in the state of Michoacan. In previous shows this year, I really tried to hone into one inspiration, like embroidery, for example, and then elaborate on that theme over several paintings.

To be really honest, in the making of the work, I have started to become a bit self-conscious that I don't just appropriate the work done by Mexican craftsmen. I want to pay tribute to their work, but it's also really important to me that I am creating unique work that that both looks like my work, but also evokes some of my inspirations. So, for this show, I really tried to take a lot of the styles and ways that I have been working with, and just mixed it all up. Right now I'm in a good rhythm with my painting, and I want to make work that I think is engaging to look at. I will pay tribute to my love for Mexican culture and folk arts in the way that I am naturally working. I realize that at a certain point I have to trust that my culture is in me, and the things I make will speak to that culture.

This exhibit contains a total of three murals. Do these pieces work together or do they individually convey their own specific message?

The pieces are framed in a similar size and all have a black background. In that sense, they are a unit of works. The individual pieces, however, are meant to have their own feel, style, thematics, and technique. One is all about linework. One is about large blends. One is about repetitive patterning. They are all pretty different from each other, but I think they look like the same person made them. 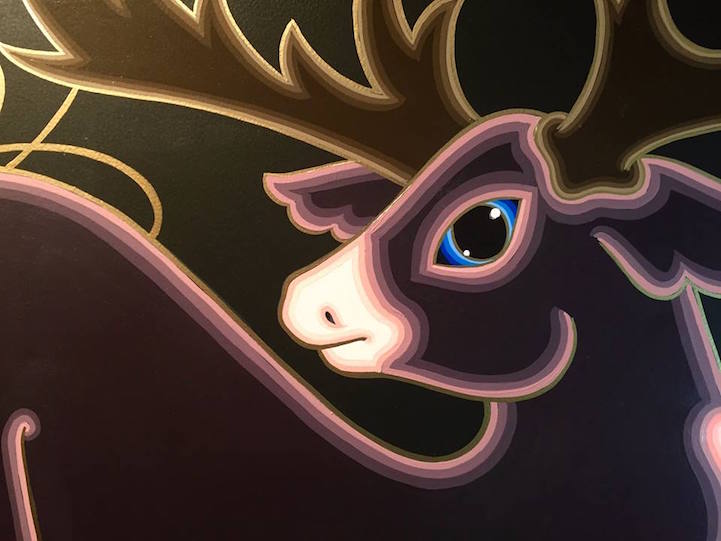 Your exhibit's press release states, “Flores en Fuego is a reminder to its audience of the wealth of similarities human beings share, a meditation on the visual touchstones that unite us all and inform a universal pursuit for beauty and community across history.” How does your work accomplish this?

When I started working on folk arts-inspired work, I found something that I think a lot of artists who work in this vein find… that there are more similarities than differences in many cultures' traditions. For example, the Noche en el Ajusco piece (with the deer and the birds) is my interpretation of small paintings done on bark paper in the states of Morelos and Guerrero. They feature birds in branches with flowers all around. When you look into imagery like this, you find that there are versions of that “birds in branches” motif all over the world. It seems obvious that there would be imagery like this all over the world, but I am nonetheless drawn to the idea that there are such similarities in peoples from seemingly very different cultures.

With the work that I'm doing now, my intent is to try to focus less on being different, and instead focus a bit more on painting in ways that feel like a common language.

My Modern Met granted permission to use images by Jet Martinez.