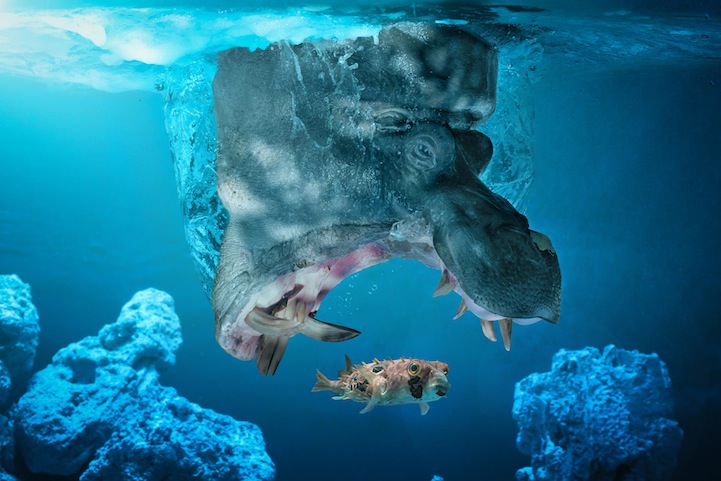 Winterthur, Switzerland-based photographer John Wilhelm captures amazing shots of animals and manages to heighten the scene through some clever photo manipulation. Using only photos that he's taken himself, Wilhelm pieces together different elements from each to result in a brilliant composition that catches the eye and tricks the viewer into believing its fantastical presentation.

The 43-year-old self-proclaimed “photoholic” recently caught the image of a hippo leaping out of the water, open-mouthed, and transformed it into two different, intriguing compositions. One presents the ravenous beast eagerly attempting to swoop down into the water to swallow its unsuspecting prey whole. The alternate version shows the hippo leaping out of the water to playfully chomp at some floating bubbles.

In each case, the photographer displays a keen eye for photography coupled with editing skills and a wonderful imagination. The images have caught the attention of several users on 500px, polarizing the community between those that praise and criticize Wilhelm's use of Photoshop to manipulate images.

We were lucky enough to get in contact with the photographer who told us, “I was very surprised about the discussion but thought it was very interesting. I can understand people being annoyed by the attention these images get. People who travel all around the world to gather a nice shot while Photoshoppers like me just go to the zoo 🙂 But I do what I do because I absolutely love it and not to annoy serious National Geographic photographers. I think the most important thing is to be honest. I don't want to fool anybody. I just have to do it because it's my way to live my creativity.”

We were able to ask John a few more questions about his process and how he got that original shot of the hippo. You can read his answers, below. 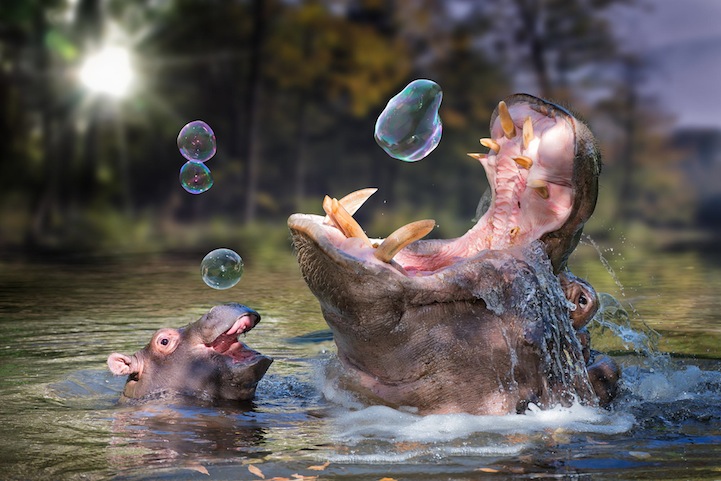 You take all the images yourself and compose them in post. Do you have a composition in mind beforehand?
Sometimes I have a concept to go for but often I just shoot and ideas pop up once I visualize the results in Lightroom. The hippo pictures for example were created this way. When I saw the shots, I realized that the water splashes in the air looked very similar to bubbles below water. I just flipped the hippo vertically to see what it would look like and the idea with the fish arose immediately… By the way, I took all shots for the image during the same visit at the Zoo Basel. 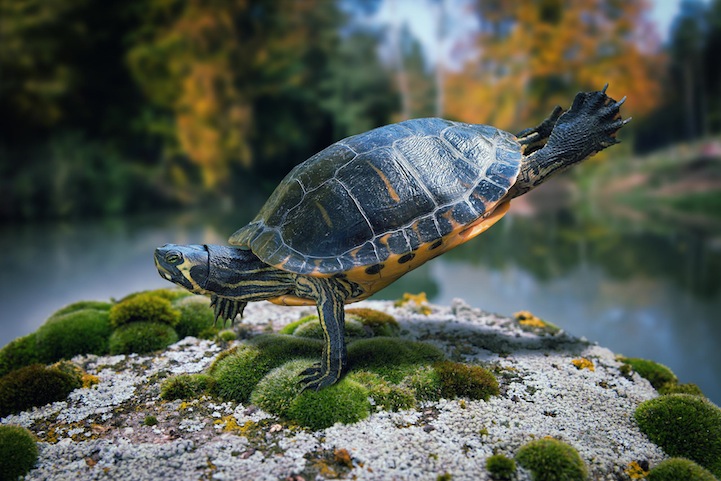 How did you get the original image of the hippo with its mouth wide open?
I just had to wait a little time in front of the hippo area in the zoo. But as I was told from “Hippo-Pros” I was very lucky because they often sit there for hours like stones. But I guess it has something to do with the baby hippo. Mom and Dad Hippo were very nervous and often threw their heads out of the water (while making crazy horse-like noises which frightened a lot of nearby kids) with wide open mouths. 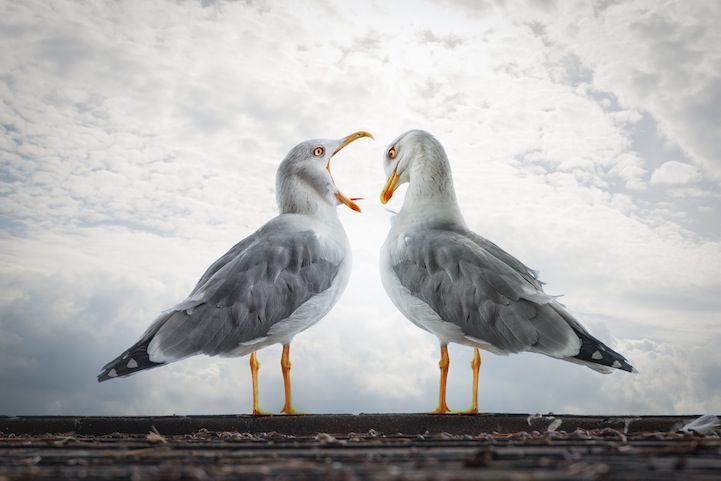 How long does it typically take you to create these sorts of compositions?
The “Hunting Hippo” took me 2 hours. But I'm sorry I didn't do it more precisely and did not finish it as careful as possible. To be honest… during the creation I often thought about stopping the little project and deleting the image. I absolutely did not expect it to gain THAT much attention on the internet. If I knew, I would have done a few things different and more accurately.