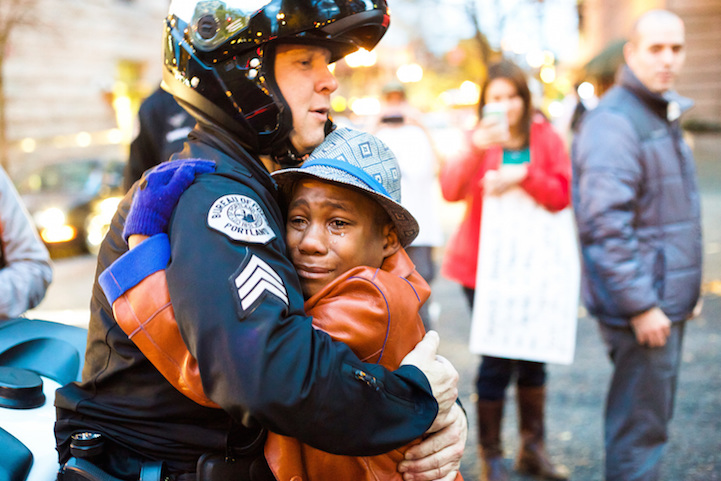 Amidst the hate, anger, sadness, and turmoil that have swept across the US since a grand jury's decision not to indict Ferguson police officer Darren Wilson in the shooting death of Michael Brown, this powerful photo of a young, black protestor tearfully hugging a white police officer has captured the hearts of many for its inspiring messages of hope and humanity. Captured by freelance photographer Johnny Nguyen, the heartwarming image shows 12-year-old Devonte Hart and Portland Police Sgt. Bret Barnum, who were both present at a Ferguson demonstration in Portland last Tuesday.

According to a Facebook post by his adoptive mothers, Sarah and Jennifer Hart, Devonte stood alone in front of a police barrier, wearing a “Free Hugs” sign around his neck as he gazed at the police officers with tears streaming down his face. Sgt. Barnum, who has been with the force for 21 years, approached the young boy and extended his hand. After making small talk, the officer asked why Devonte has crying. According to his mother, the 12-year-old expressed “his concerns regarding the level of police brutality towards young black kids,” to which Barnum replied, “Yes. I know. I'm sorry. I'm sorry.” The officer then asked if he could have a hug, resulting in this beautifully touching photo captured by Nguyen.

Devonte's mother says, “My son has a heart of a gold, compassion beyond anything I've ever experienced.” After a childhood full of violence, abuse, and neglect, he and his two siblings were adopted by the Harts. Defying the odds presented by his rough start in life, Devonte grew into a caring and kindhearted young man who has spent his last two birthdays raising money for charity. According to his mother, “We hit the streets (Nov. 25) with the intention of spreading love and kindness, and to remind (ALL) people that they matter in this world.”

Update: We were lucky enough to have the opportunity to ask Nguyen a few questions behind his striking image. Read that exclusive interview, below. 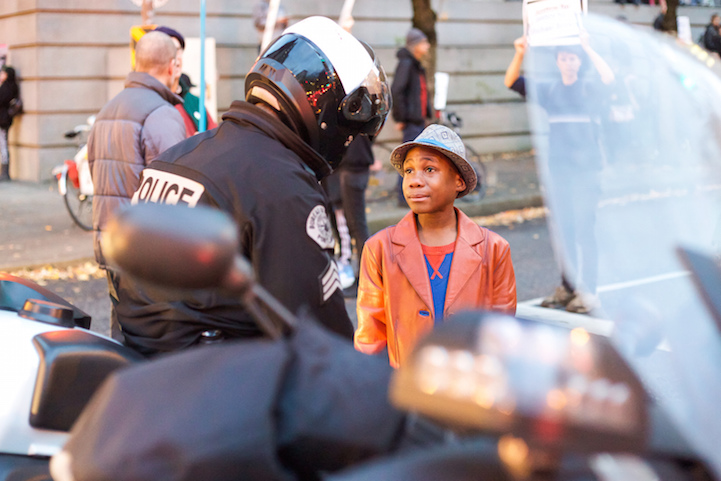 What was it about Devonte that compelled you to stay at the scene and eventually capture your extraordinarily powerful photo?
What compelled me about Devonte was the fact that he was the only one in the midst of a hundred protestors holding signs that could otherwise be seen as violent, angry, hateful, and graphic, who had a sign around his neck that said “Free Hugs.” This opposite was what immediately drew me to Devonte. He also had tears running down his face when he hugged people. It wasn't until Sgt. Barnum and Devonte started to speak that I knew I had to really stay at the scene. The stark juxtaposition between White American Cop and Young African-American Boy is what got me.

Is there a message you want to convey through this photo?
The message I want to convey with this photo is that if hate is the problem, then love is the fix. Love and compassion is the real answer. Just like Martin Luther King Jr. said, “Darkness cannot drive out darkness; only light can do that. Hate cannot drive out hate; only love can do that.” We must come together, for even a moment, like Devonte and Sgt. Barnum. This photo has become a symbol of humanity, and I hope people can take away from that as much as possible in troubled times like now.

What's your reaction to your photo being shared with hundreds of thousands of people as it spreads virally across the internet?
I am absolutely honored to see my photo get this much exposure. I believe that a photo isn't complete until it is communicated, and it's gone beyond that. I'm just glad I can do my part not only as a photographer but as a contributing member of society to push the message of positivity, hope, and humanity. It's a dream come true.

Thanks so much for the interview, Johnny!