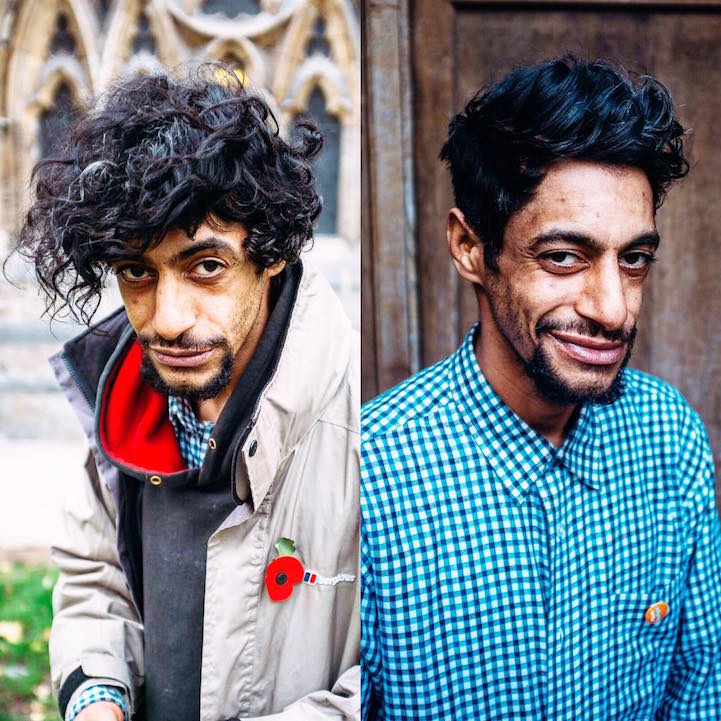 Barber Joshua Coombes spends his days in the Jeff Goodwin salon and his nights cutting hair on the streets. After observing a similar idea in New York, Coombes was inspired to cut hair for the homeless–free of charge. After work, the barber and his photographer friend Matt Spracklen take to city streets of Devon, England to offer their services to the homeless. Coombes often has a queue and can cut up to seven people’s hair each night. As for Spracklen, he documents these inspiring acts so they can be posted on Instagram with the hashtag #dosomethingfornothing.

“For me, it is about giving something back and raising awareness of the homeless and by doing it on the street, it breaks the generalization and so far it has been a good response,” said Coombes. “Doing something good for nothing really wakes people up. It is just me giving up a bit of my time, it is a great experience and it is really humbling for me.”

This week, both Spracklen and Coombes plan to travel to the town of Yeovil so they can offer their services to more people in need. The barber concludes, “It is easy to just give money to charity, but it is even more rewarding to create awareness.”

Above: “Before and After of Darak. I enjoy talking to this guy so much. After seeing him around the city and getting to know him more, it was great to finally get the chance to cut his hair. It nearly happened once in the past, but he let others in need of a haircut go first. His generous nature and huge heart makes it harder when I see him going through a rough patch. Always a smile any time any place, massive respect for you brother.” 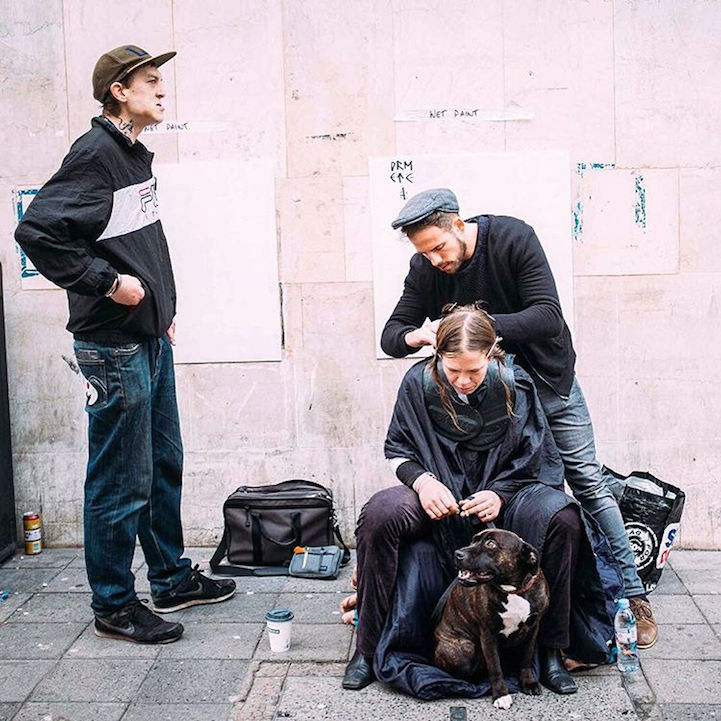 “This is Sherrie, 27. It was an absolute joy to cut her hair. She spent her first nights on the street as a young teenager and has been homeless or in temporary housing ever since. There’s one relative she still sees but strained relationships with family members make it difficult. Whatever past events/reasons add up to somebody being in this situation surely doesn’t warrant them sleeping outside for the duration of their adult life so far. So nice to meet her and her beautiful dog.” 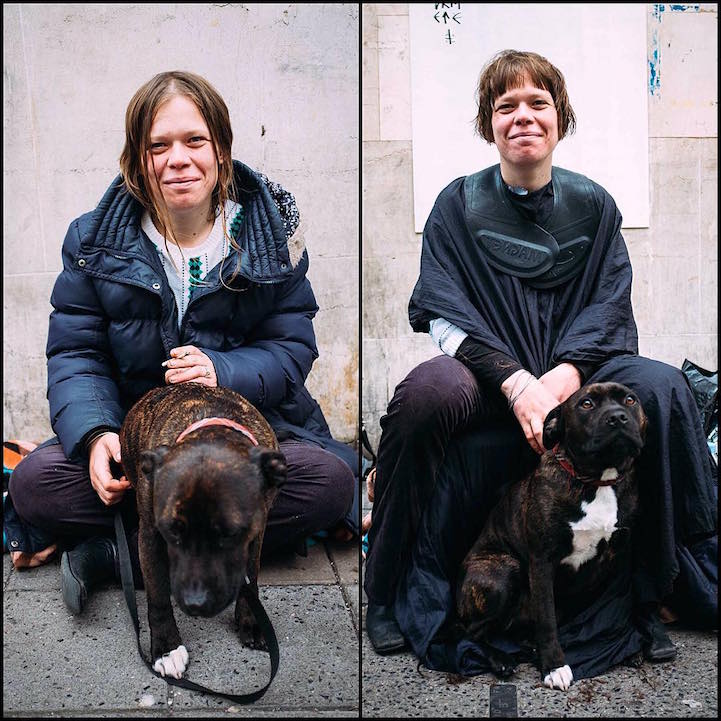 “The last time Sherrie had her haircut was by a friend 6 months ago with kitchen scissors. Naturally it had a lot of imbalance so we decided to go for a shorter shape to tidy things up, undercutting back section for more longevity as the haircut grows out. Her wonderful dog stood by her side the whole time.” 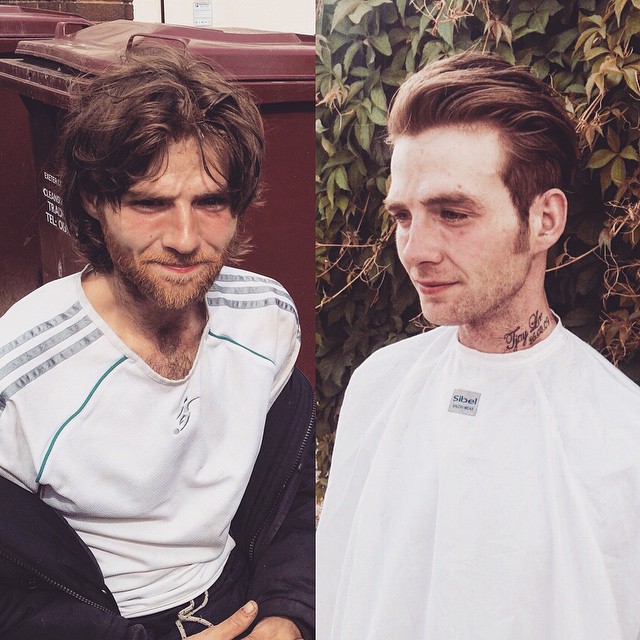 “Jay is 26, he was having a pretty bad day when I saw him after being woken up by the police at 4am and told to move on from the shop doorway he was sleeping in. After his haircut he seemed more talkative and a bit happier about things. Perhaps when he gets moved on tomorrow morning he’ll at least be greeted with a bit more respect.” 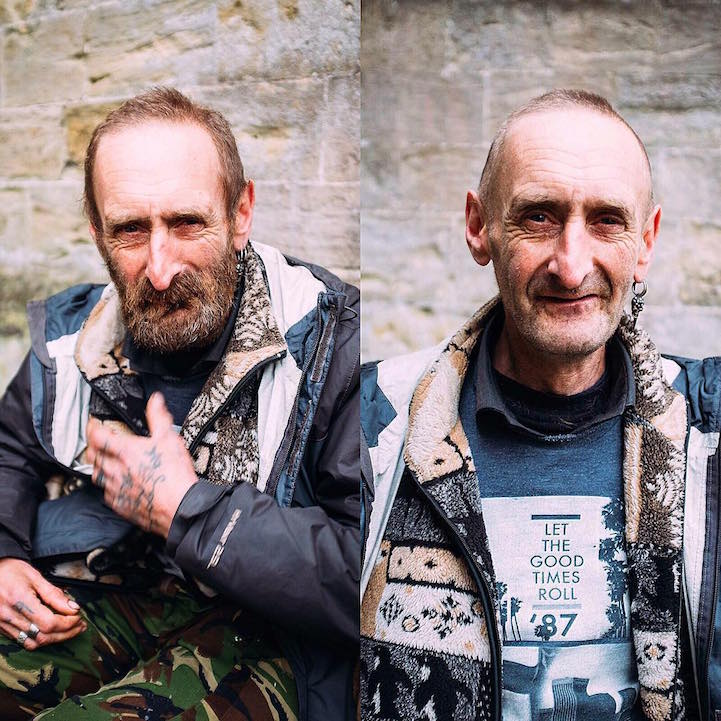 “Andy has been homeless since young adulthood so the streets are his home and all he knows now. His haircuts are seldom due to obvious financial reasons so we decided to take it nice and clean to last him through until next season. It was great to spend some time with this man listening to his stories while I cut his hair. There’s so much we can learn from the faces most of us pass by without a second look.” 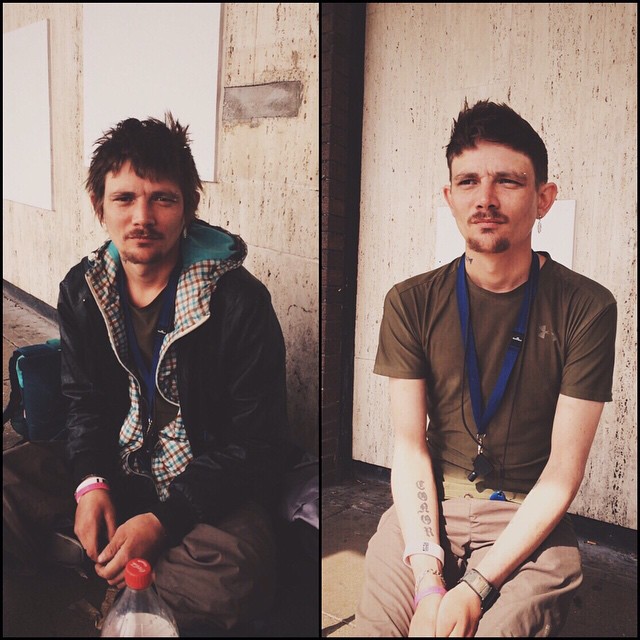 “Chris hadn’t had a haircut since before Christmas, waiting for the warmer weather to come. After a few years on the street he still has a real positive outlook on the future, telling me, ‘Life starts at 30, mate’.” 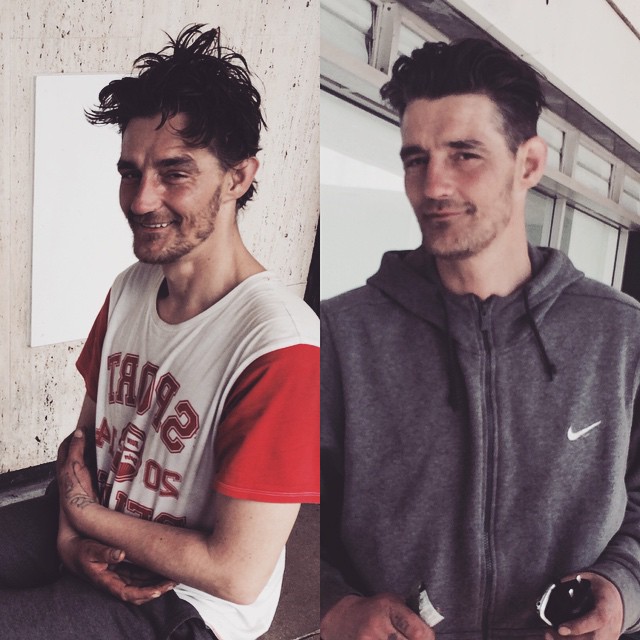 “‘Cookie’ was more than happy to have his hair done. During the haircut he was reminiscing of times he had cut his own hair in the past, sometimes freehand with a razor blade or whatever he could find. After spending years on and off the street I’m in awe of this man’s optimism. Big reshape, fresh for spring.” 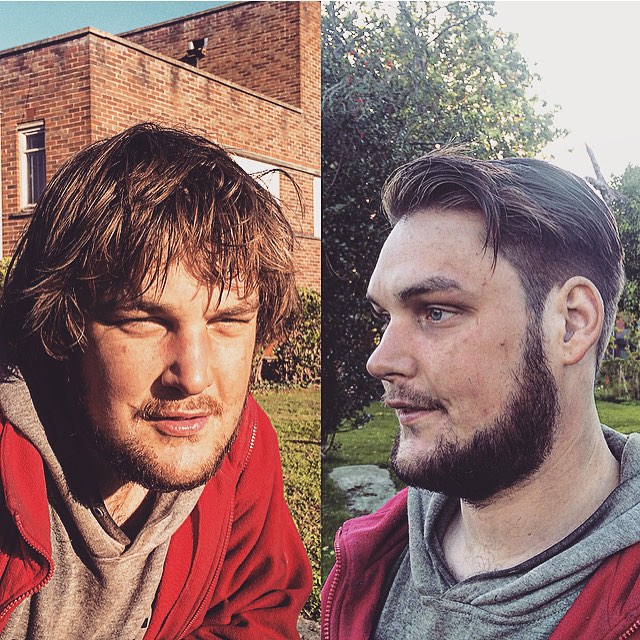 “This is Ozzy, 26. He’s been sleeping on the street for a year now. His last haircut was over 6 months ago so we had a good amount of hair to get through. We decided to keep more length on top with the colder season approaching. After the haircut he joked, ‘Girls might double take for the right reasons now!'” 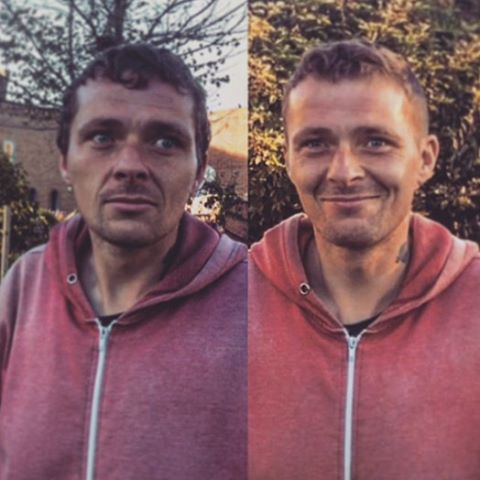 “Not having a bed for most of the year is normal for some people. Ignoring it is easy, we’re all guilty of that sometimes. Acknowledging it is the first step to empathy. It’s impossible to change someone’s past and difficult to change someone’s present situation but the future is unwritten.” 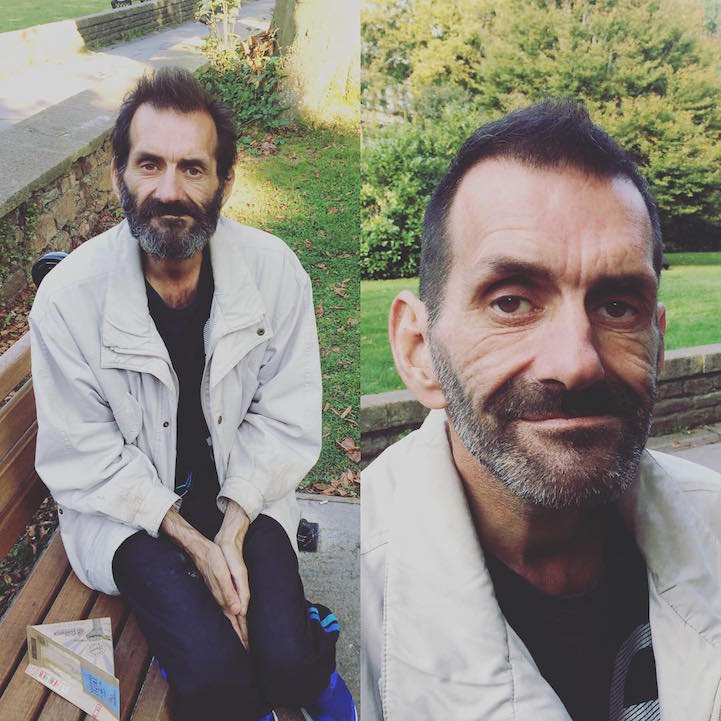 “Long overdue haircut and beard trim for Dave today. He’s been homeless for the majority of his adult life, quite hard to comprehend for most of us. After a bit of food and a haircut he seemed in good spirits. It always surprises me the positivity of people in this situation.” 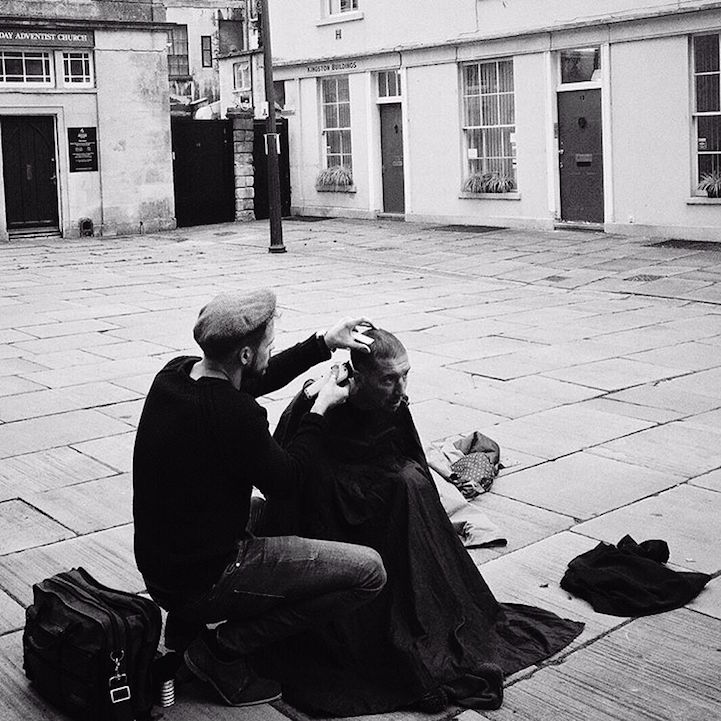 “On the streets of Bath today. This shot is of a haircut for Johnny, 41. He is sleeping rough most nights at the moment with the odd night in a shelter when he can. After a life moving from place to place he’s decided to try and settle here and make a step towards getting off the street. It seems like breaking the cycle of day to day life being homeless is the hardest thing.” 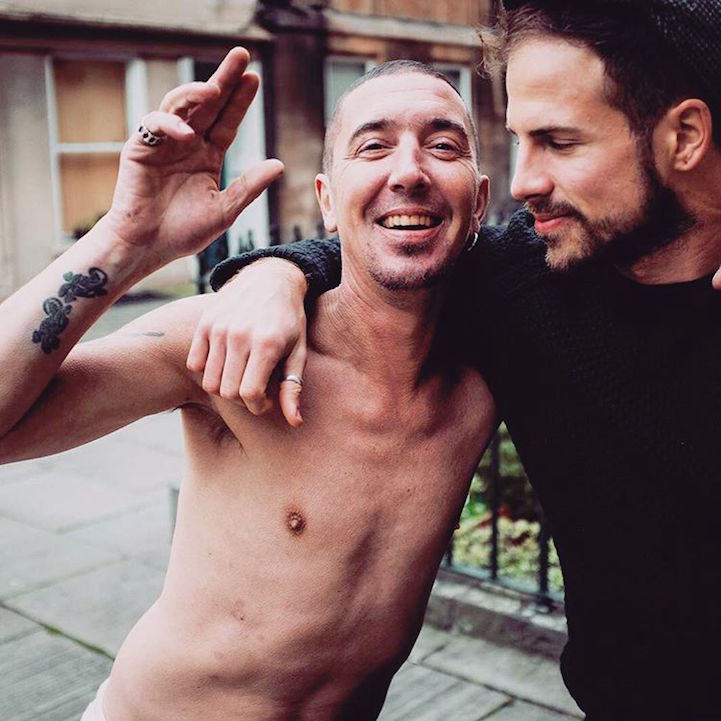 “After photo – Happy customer in Bath yesterday. Johnny really opened up while I was cutting his hair. It was great to see him relax and soften a bit. Sometimes all people need is to lend your ear for a while, talking things through doesn’t change but it helps.” 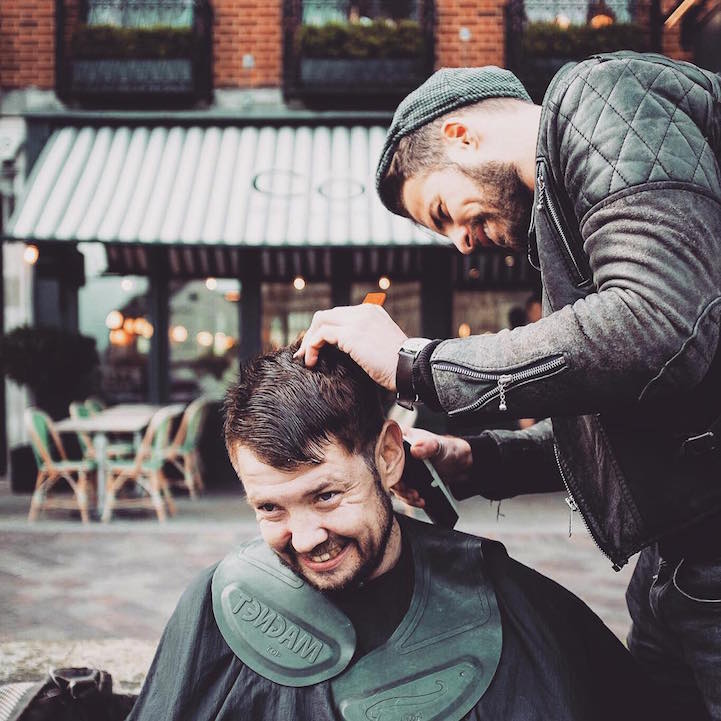 “Gavin, 27, has been homeless or in temporary housing for the last year or so. We had a good conversation about why he thinks certain people find it hard to get off the street and back on the road to being housed again. He told me that some temporary houses are quite difficult places to be when you’re trying to stay clean. I’ve always heard a lot of generalisations involving drugs and alcohol when it comes to homeless people but I believe there’s always a root to every problem and that’s a good place start when it comes to judgement.”

All photos and captions via Joshua Coombes.