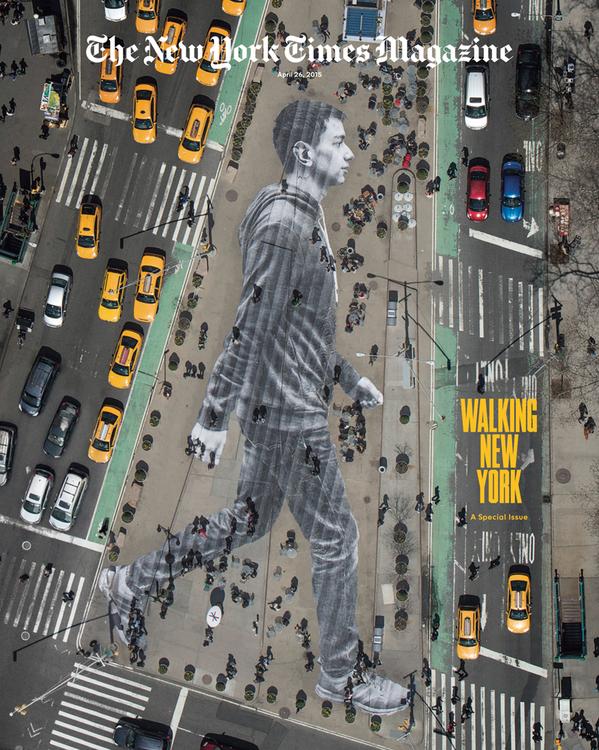 This morning, The New York Times Magazine shared their latest cover. Photographed from a helicopter, the aerial photo shows a brand new piece by street artist JR of a gigantic man walking in New York, or more specifically, the pedestrianized Flatiron Plaza next to Madison Square Park. The massive wheatpasting highlights The New York Times‘ latest initiative called Walking New York where everyone is invited to share their most memorable walk, the one that they love or remember the most.

On a special, interactive site, users can position a pin or enter an address to show the specific location of their favorite walk. In 500 characters, they can then share why that walk is meaningful to them. Select submissions will be published online throughout the coming weeks.

On social media, JR teased this project, tweeting on April 20, “I've been working the last weeks on a very special project with @nytimes that I am about to reveal ..#walkingnewyork”

Today, he gives more details about the project, writing on his Facebook page, “Last month the New York Times Magazine @nytimes reached out to me to think about a project together… I told them I have been working for a year on Immigration and I would love to continue what I started on Ellis Island in the city. So, we started looking for people who arrived less than a year ago. We chose 15 coming from all over the world. I photographed them walking in the city … all of them completely unknown… living in the shadows of the city and learning English slowly. We pasted Elmar, 20 years old who came from Azerbaijan, on the floor of Flat Iron Plaza in New York City. The image was 150 feet high. People walked on him all day and no one really noticed him… Today he is on the cover of the NYtimes magazine that comes out this Sunday on paper… while everyone else is in the shadow smile emoticon …………… @kathyryan1 @jakesilverstein ?#?ChristineWalsh? and the massive team who helped making this possible!!!”