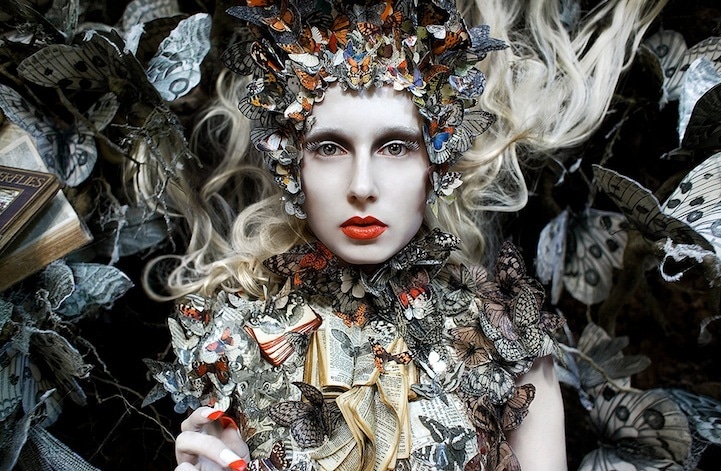 English photographer Kirsty Mitchell continues to enchant us with her colorful photography inspired by her late mother who sparked and encouraged a wild burst of creativity in her life. Two of the latest additions to her ongoing Wonderland series, respectively titled The Ghost Swift and The Journey Home, introduce two new scenes in her charming world. As always, Mitchell has worked diligently to produce each shot, piece by piece, taking on the additional roles of costume designer, seamstress, and location scouter with the help of her hair and make-up artist Elbie Van Eeden.

In The Ghost Swift, Mitchell features a fair-skinned woman shrouded in a magical array of paper butterflies. The images are subdued with only a few hints of color that pop out brilliantly. From the model's cherry lips and half-white and half-red nail polish to the spots of blues, reds, and oranges that peek out from the clambering butterflies that frame her face.

The photographer says, “Her character represents a creature born from the essence of stories – a body of books and forgotten ripped pages, created by the natural elements and insects that surround her. I wanted her half human form to be the marriage of the earth and printed words; spun together by the moths and butterflies that shared the hollow she would spend her life guarding.”

In The Journey Home, we are reunited with Mitchell's main model in the series, Katie Hardwick, who is seen solemnly making her way down a winding path. There is a striking contrast of the woman cloaked in yellow leaves trailing a path of golden foliage behind her against a forest of fallen red leaves. Each yellow leaf in the collection was personally picked by Mitchell and her team for this shoot, proving to be a race against time. The photographer says, “The colour yellow was vital to my plan, and is highly significant to the story and the ending of the series… I know I am finally on the path to completion. It has been three and a half years, of all I can physically and mentally give, and by the time it's done I expect it will be almost four.”

To read more about the journey behind each photo shoot, check out Kirsty's blog where she goes into detail about the development of each of her imaginative concepts all the way through production. 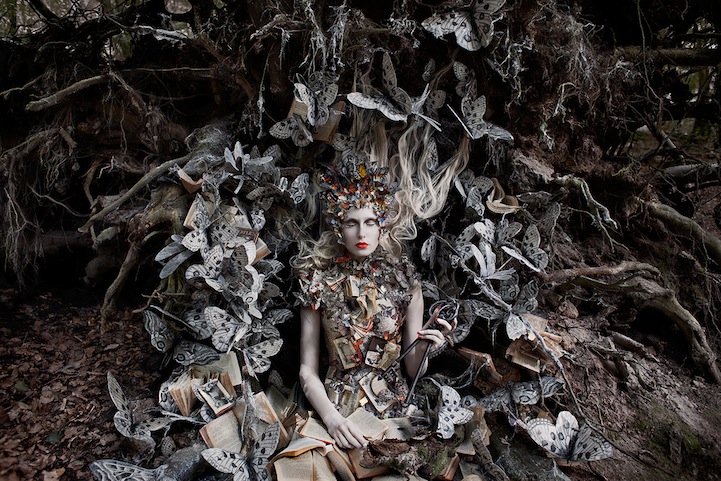 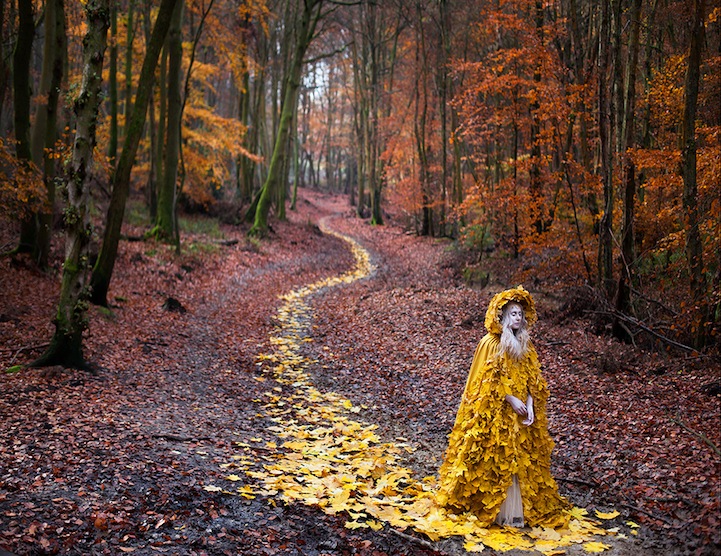 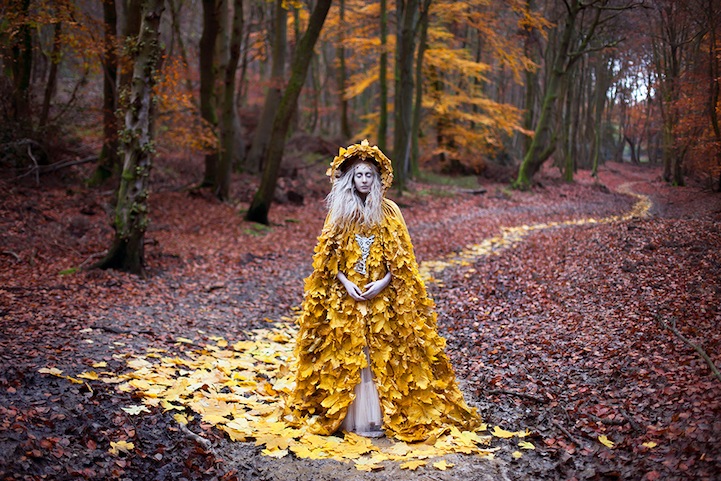 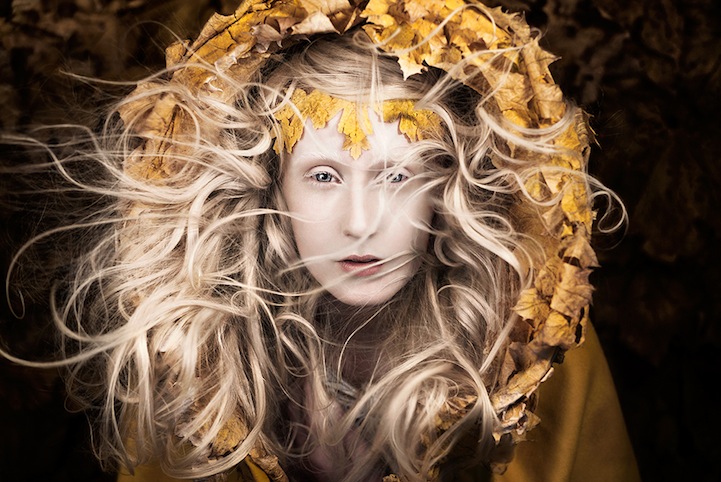 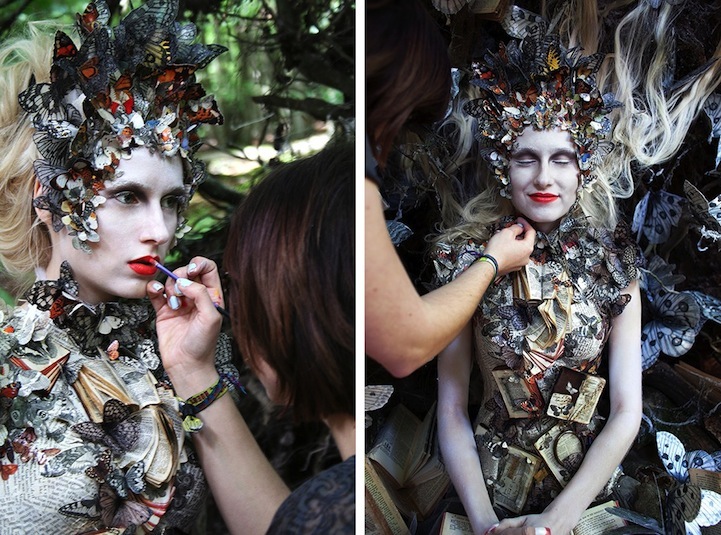 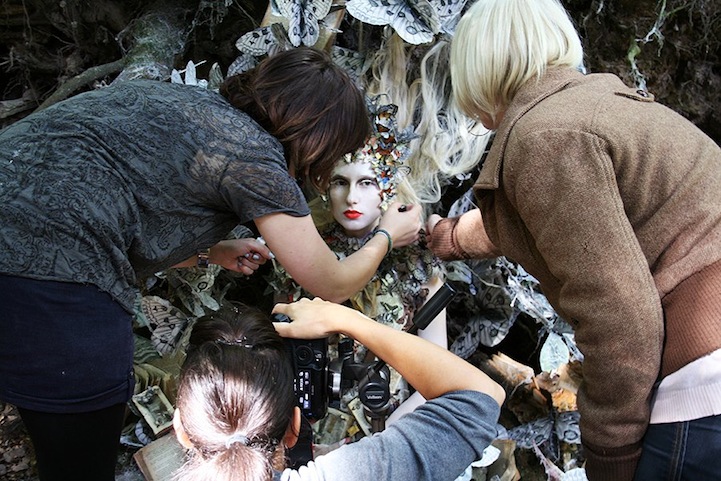 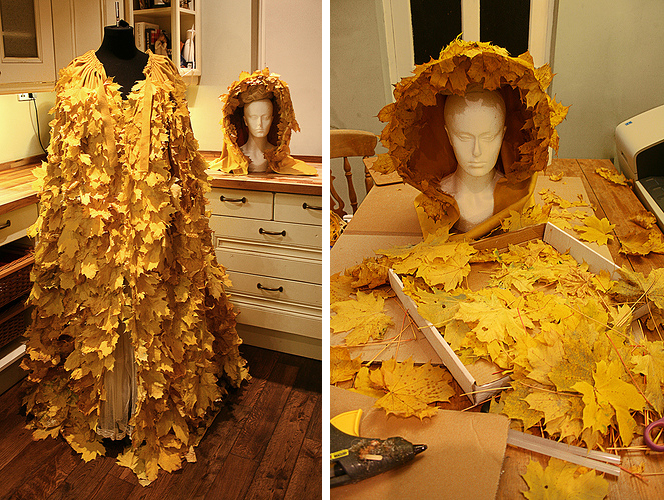