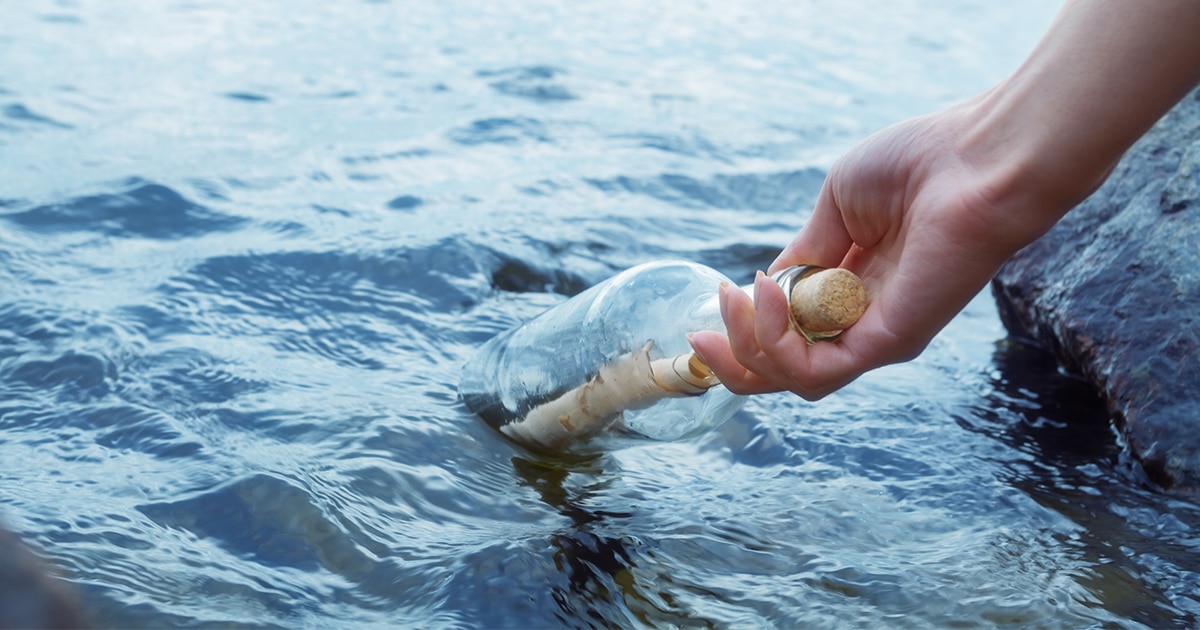 From the rescue pleas of shipwrecked castaways to the love letters of sailors, sending a message in a bottle and allowing fate (and the tide) to determine its delivery is like something from a storybook. But it was these seafaring adventure tales that recently inspired an American family who were stranded at the top of a waterfall in California to seek an alternative route to being rescued. With no cellphone signal and limited supplies, 44-year-old Curtis Whitson tucked an SOS note into a green plastic bottle (with the words “GET HELP” scratched into it) and tossed it into the river. Despite the remote chances of the drifting bottle actually reaching someone, his call for help actually worked!

Whitson, his girlfriend Krystal Ramirez, and their 13-year-old son Hunter had decided to spend 4 days camping and hiking along the Arroyo Seco seasonal river in California. After two and a half days of boulder-hopping and floating along the river, the family reached an isolated spot of land at the top of a 40-foot, hidden waterfall, where the currents were too strong to pass through. Having completed the same trip 7 years previously, Whitson recalled a thick rope bottled onto the slippery rocks that had allowed climbers to safely rappel down and continue their journey—but this time, the rope was gone.

Realizing the dangerous situation they were in, the group tried yelling for help, and Whitson even carved the words “WE NEED HELP” into a stick with his pocket knife and threw it into the stream. Unfortunately, neither efforts worked, so they had to come up with a new plan. After spotting a bright green plastic bottle among the family's equipment, Whitson decided to scratch the words “GET HELP” onto the outer surface. The family also included a handwritten note inside, scribbled across a small bar order sheet that Ramirez—a bartender—had brought with her. It read, “WE ARE STUCK HERE @ THE WATERFALL GET HELP PLEASE.” The family tossed the bottle into the water and hoped for the best.

@Gidi_Traffic Curtis Whitson, his 13-year-old son Hunter Whitson and his girlfriend, Krystal Ramirez who got stranded atop a 40-foot waterfall during a camping trip in the California woods turned their reusable water bottle into a cry for help that led to their safe rescue. pic.twitter.com/DWIIcSfjyM

Miraculously, a couple of hikers spotted the bottle a quarter of a mile downstream, found the note, and immediately called the manager of the Arroyo Seco Campground for help. A California Highway Patrol helicopter was hurriedly organized, and the stranded family were found using infrared technology as they slept by a campfire in their sleeping bags. “This is search and rescue—you have been found! Stay put and we’ll be back to get you tomorrow morning.” A voice from the loudspeaker shouted down to them. “It was one of the best feelings,” Whitson told CNN, “nothing was sweeter than those words uttered by CHP.”

Helicopter pilot Joe Kingman told the Washington Post, “A lot of pieces fell into place just right for these folks.” He also added that in his 23 years of rescuing people, this was the first rescue mission that began by finding a message in a bottle.

Curtis Whitson has two strangers to thank for his family being alive today. Two brave hikers plucked a lime green bottle from a river and alerted authorities about the SOS message they found inside.https://t.co/qpQTQXDjA7 pic.twitter.com/Ig0GlnaiKx